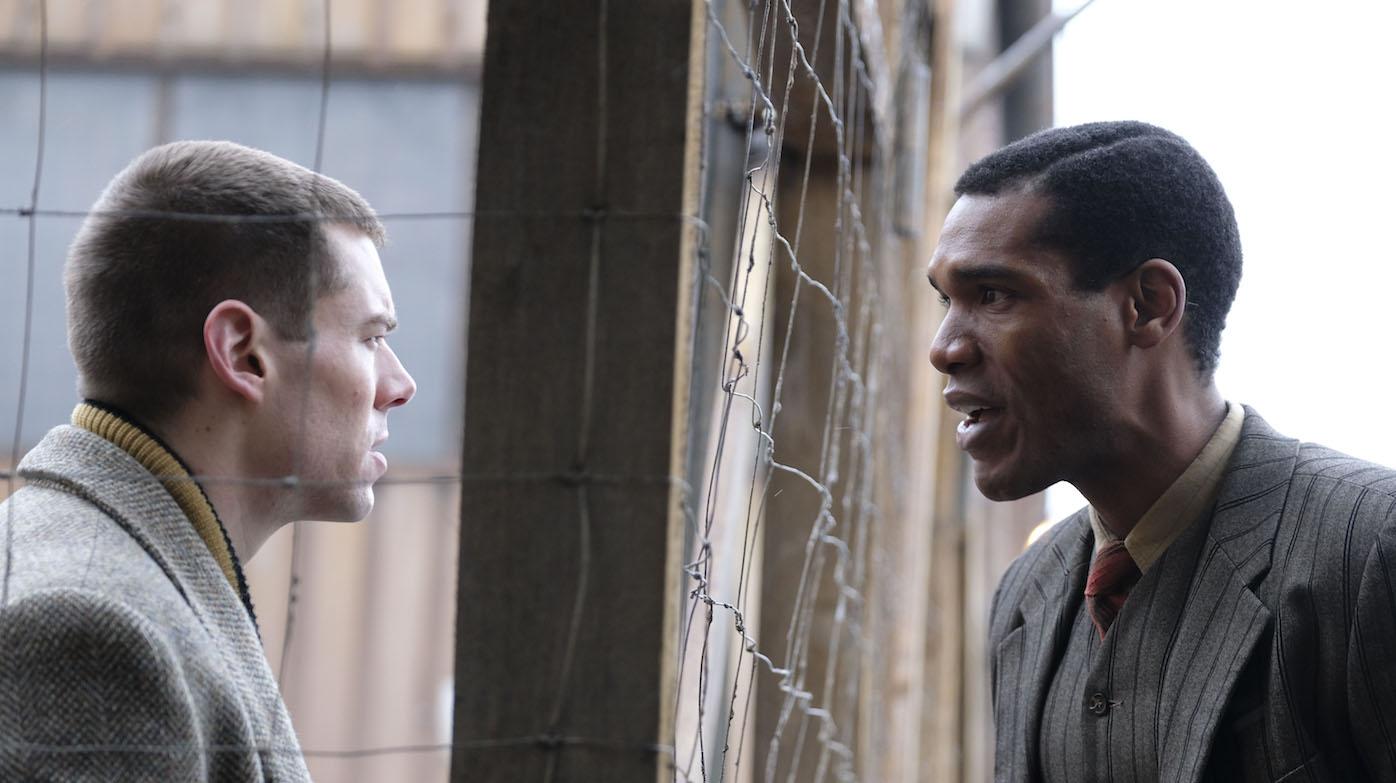 Now that the Nazis have occupied Paris, Albert is in danger. Photo: Dusan Martincek / Mammoth Screen 2019

France has surrendered to Germany, and Paris is now occupied. Many of the Allied troops managed to flee from Dunkirk, including Harry and Eddie, who surprises his girlfriend, Lois’s musical partner, after one of their performances. Harry’s homecoming is a bit of a surprise, too: he has a Senegalese soldier with him, who is on his way north to Scotland to train with the Free French Forces.

Tom is not one of the lucky ones who made it back to England. Douglas has received a telegram that Tom is missing, but he refuses to believe he’s dead—and he’s right. Tom is in Webster’s hospital in Paris. Webster urges Tom to escape via some of his friends in the French resistance. He will declare Tom dead, and then Tom will be snuck out through Spain back to England.

Webster’s lover, Albert, has also decided it’s time to leave France. A German officer visits the club where he plays saxophone and has warned him to flee—the Nazis do not approve of jazz. Webster downplays Albert’s concerns, then finally admits he needs to see if Tom and other POWs can successfully escape before he lets Albert go the same way.

When German officers visit Webster’s hospital, they ask for an accounting of all the POWs—and ask to see Tom’s “corpse.” One of the nurses, Henriette, bravely reveals a burned-out corpse, and the German vomits at the sight. All the while, Tom is being rolled into the morgue on a sheet-covered gurney. After Henriette manages to deflect German suspicions, she breathlessly kisses Webster, but is immediately embarrassed by his lack of reciprocation. He awkwardly apologizes.

Robina and everyone in her house also endure quite a bit of awkwardness, as she, Harry, the Senegalese soldier, and Jan all sit uncomfortably in the parlor together. Then Lois knocks at the door, adding a fifth member to the odd company. She brings Tom’s old soccer jersey for Jan, a gift from Douglas. She wants to speak with Harry alone, so she joins him when he brings the Senegalese soldier to the train station.

After dropping the soldier off, she tells Harry to stay away from her and her child, and that she doesn’t want any money. (Douglas has warned her that he will ask Harry and Robina for money for the child if Lois won’t, since she wants to keep the baby instead of give it up for adoption.) Harry asks her what she will tell the child about its father. There’s a war on, she says; she’ll say he died in the fighting.

Lois may not be completely alone in raising the child. After another performance at an air base, she comforts Geoff, the shell-shocked soldier Harry and the Senegalese helped save from France—she’s used to dealing with shell-shock from her dad—and Vernon appears to chat. Later, Vernon sees her crying while talking to another soldier—she’s worried about Tom—and he confronts the soldier, assuming he is the father of Lois’s child. She quickly sets him straight, and he leaves embarrassed. 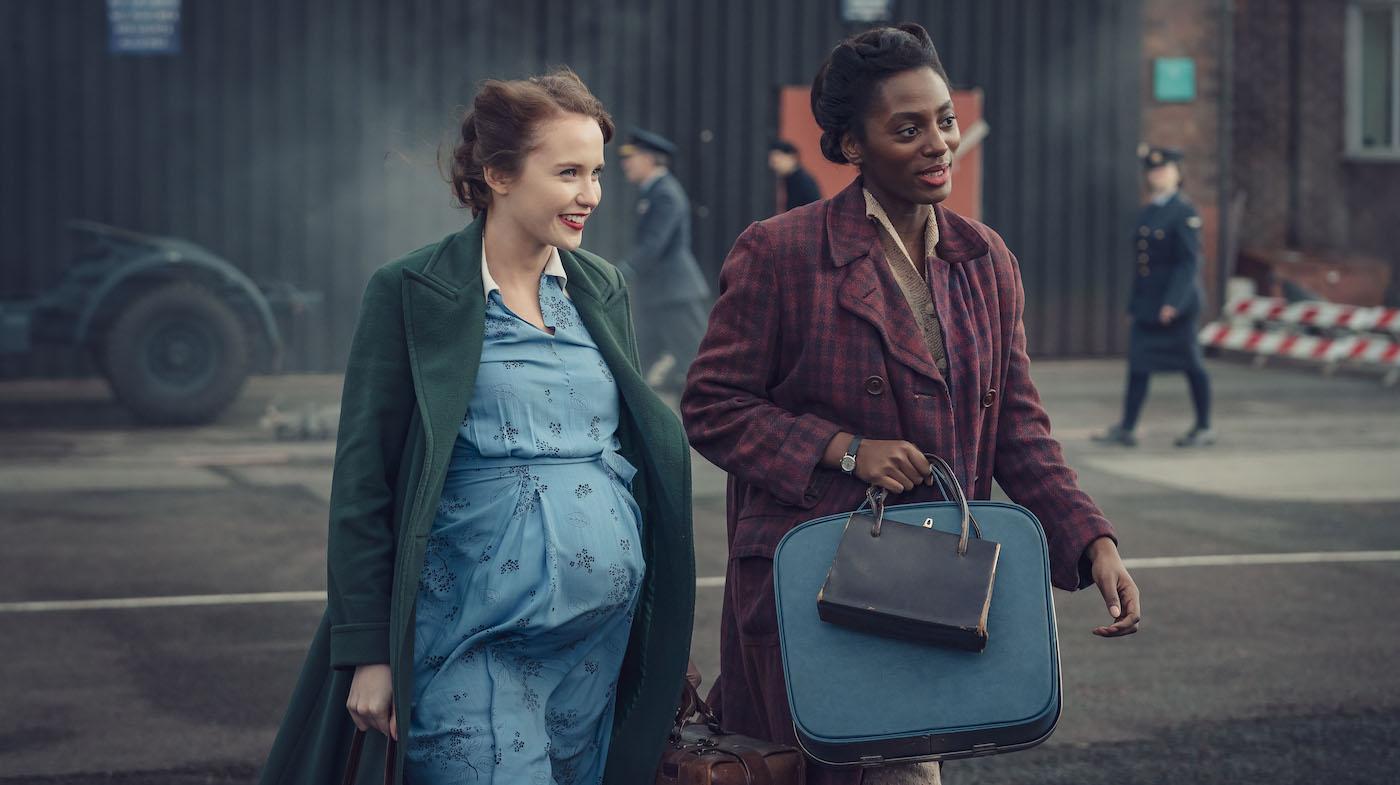 Lois once again runs into Vernon while performing at an air base. Photo: Ben Blackall / Mammoth Screen 2019

As Lois is leaving the base, Vernon comes up to apologize. She says he should apologize to the soldier, but appreciates that he stood up for her. He then hesitantly admits that he’s “absolutely besotted” with Lois and wants to look after her and her baby. He says he couldn’t let her leave without saying that, then walks away.

With the loss of Lois and Kasia from his life, Harry is feeling adrift. But then he receives a letter from the war office asking him to a meeting with one Major Taylor. Because of Harry’s skill with languages and his ability in deception—he managed to sneak Jan out of Poland—he’s wanted for a dangerous task: parachuting into Poland to rendezvous with the Polish resistance. He agrees.

Meanwhile, Tom is making his way to safety with the French resistance. Leaving the hospital an officially dead man, he meets a young woman who shepherds him out of Paris. He takes a liking to her and is disappointed when she hands him off to two new minders after they cross the border into Spain.

Tom has escaped Paris, but Albert has been imprisoned. Webster returns home one evening to find Nazis partying in his apartment. When he complains, a gun is pointed to his head. He leaves, rushing to Albert’s jazz club, where he’s told Albert was taken away.

Webster goes to the German officer who warned Albert to leave and asks for help. The officer hintingly tells Webster he knows how much Albert means to him, and slips him a paper with Albert’s location. Webster visits Albert in prison, then unsuccessfully argues with Nazi officials to get him released, despite Albert’s admonition not to stir things up.

The Rosslers are also in trouble with the Nazis. Officials come to Herr Rossler’s factory to question him about the disappearance of the worker he accidentally killed in anger when she threatened his daughter, Hilda. The officials find Rossler’s answers inconsistent. When he returns home and finds that Hilda and his wife have returned from their lake house—the police found them there—he tells his wife to leave with Hilda and never come back. But then both he and Frau Rossler are arrested. Hearing the commotion, Nancy comes outside and grabs Hilda.

Interrogating the Rosslers separately, the officials read a list of apparent slights against the Nazi party made by the Rosslers. Frau Rossler is told to stand on the table. When she hesitates, she is slapped, so she gets up, and is ordered to repeat doctrinal nonsense.

Frau Rossler returns home to Hilda while her husband is held in jail, and tells Nancy that “everything is fine now.” While burning letters from the Nazis about Hilda, she tells Hilda to get dressed up; they’re leaving.

Herr Rossler is freed from prison; his wife admitted everything. He returns home to find Hilda and his wife dead by suicide. His sobs bring Nancy into his apartment, as well as a spying neighbor who reported his family to the Nazis. He rushes at the neighbor and shouts that he will kill her, before Nancy restrains him. He still has a son he could lose.