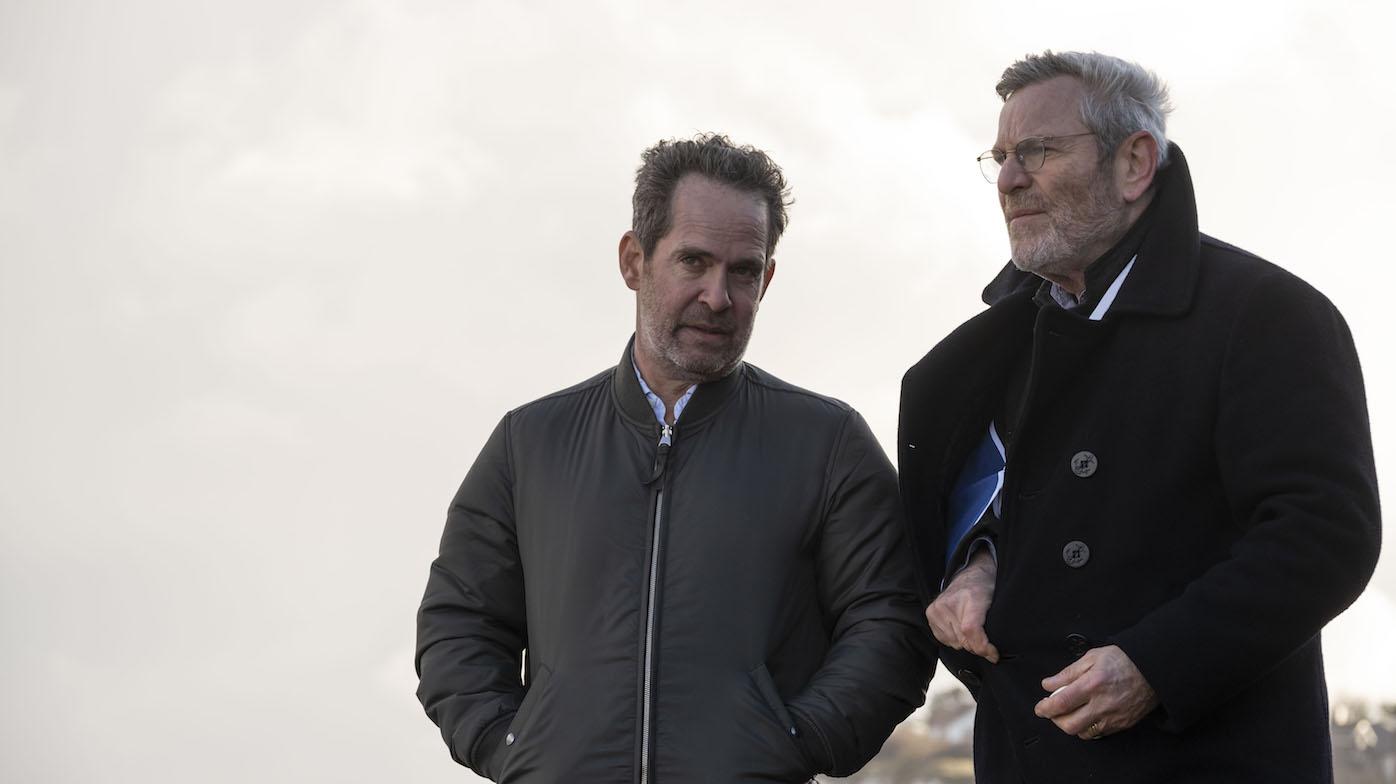 As the investigation winds down, Baptiste recaps its events to Edward. Photo: Two Brothers Pictures and all3media international

Baptiste airs Sundays at 9:00 pm and is available to stream. Recap the previous episode.

The Romanian gangster who killed Edward’s ex-wife and her partner lies prone and bleeding, the knife Edward stabbed into his side still stuck in him. He’ll die unless Edward calls an ambulance, so Edward uses his position of power to ask where Cristina is—he still wants to try to save Natalie’s sister from trafficking.

The Romanian says Dragomir might know—he was in charge of the trafficking years ago. He reveals that Dragomir is now Kim, but that he doesn’t know anything more. Edward lets him die. He leaves all three bodies in the rental home and only reports them after getting to the airport for a flight back to Amsterdam.

Baptiste and Genevieve are trying to track down Martha, who they believe is working for the Romanians. Unable to find her, they track down Niels at the bar by the police station. He’s still upset about learning that he is Baptiste’s son, and scoffs at the idea that Martha is a traitor. But he tells the detectives that she will be at a yoga class.

They corner Martha as she’s leaving the class, and she laughs when they accuse her. Genevieve lays everything out: the Europol investigation into the Romanians has been slow in Amsterdam; Martha put Baptiste on the case of Natalie so that he could find the lost money for the Romanians. Martha, angry and incredulous, tells them to get a warrant.

As Baptiste and Genevieve drive away, another car collides with theirs. A man gets out and starts shooting, and a dangerous chase ensues. Finally, several police cars arrive and they are saved.

Baptiste suddenly has an idea. He and Genevieve drive to visit Bram, the recluse who spied on a whole village with cameras. Bram has thrown out his whole surveillance set-up, like Baptiste told him to, but Baptiste digs through the dumpster to retrieve it.

He asks Bram to look at footage from the bathroom of a gas station where he stopped with Niels. The footage reveals the beginning of a phone call that Baptiste interrupted and found strange: Niels was talking to Constantin. Niels is the inside source, not his mother—and he seems to have ordered Kim’s murder while on that phone call.

Edward doesn’t yet know that Kim is dead. He goes to visit her and instead ends up speaking with her partner, who lets him look in the box of documents and photos that Kim left him. Edward believes it is records of Dragomir’s time working for the Romanians, a sort of insurance policy Kim could bring to the police if they ever tracked her down.

Baptiste and Genevieve return to speak with Martha again. They tell her Niels is the traitor, and she reluctantly brings them to his apartment and gives them keys, although she doesn’t quite believe it. Inside Niels’s home, they find a drawer full of burner phones and fake passports. Then Baptiste notices Martha on the phone on the street outside, and realizes she is warning Niels. He rushes down to her and grabs the phone, trying to convince Niels to turn himself in. Niels refuses, and says Baptiste will never find him. 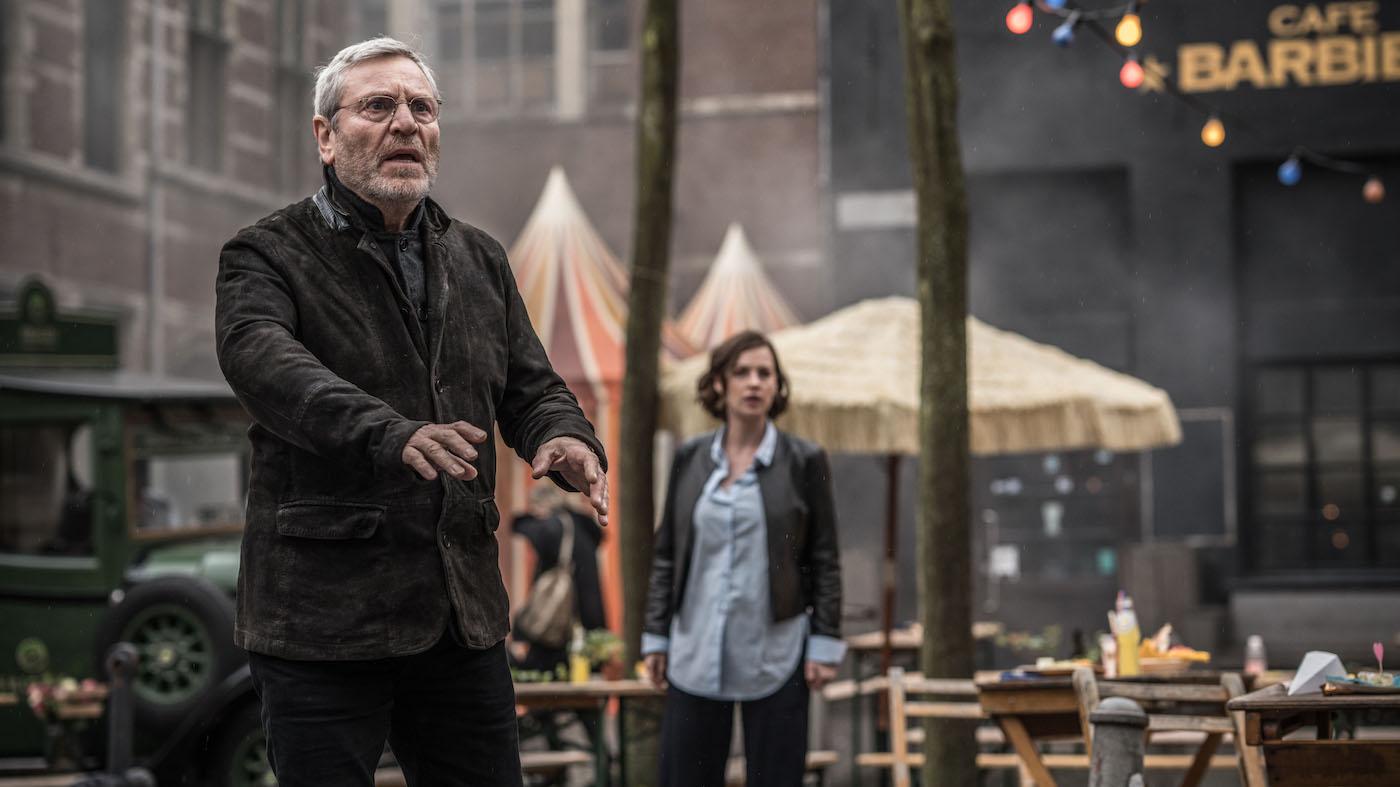 The discovery of the traitor in the police eventually has terrible consequences. Photo: Two Brothers Pictures and all3media international

Edward calls Baptiste and asks to meet. He hands over a sheet of paper from Kim’s box: it’s full of phone numbers and possibly a set of coordinates. Despite everything, he still wants to try to help Cristina.

Genevieve returns home. She notices an action figure next to her door has been moved—we have already seen an associate of Niels enter with a cleaver. She grabs a pair of scissors and cautiously moves through her apartment. No one is there—although the balcony door is open. She shuts it, and receives a breathless call from Europol.

As Baptiste returns to Celia and his family’s safe house, he receives a call from Genevieve. The Romanian gang has decided to suspend the Amsterdam operation—too much attention has been brought to it via Constantin and Niels. Baptiste, his family, Edward, Genevieve: they’re all safe now.

Two months later, Baptiste meets Edward on the English beach where Edward’s father took daily walks. The French detective’s arm is in a cast. Edward asks what came of the coordinates found amongst Kim’s things.

Genevieve, Baptiste, and the police raided the compound at the coordinates and rescued a number of girls being held there for trafficking. But Cristina was not among them. She was sold, one girl explains, for 750 euros.

Baptiste also tells Edward that Niels has been found and arrested. Niels had asked Martha to meet him at a fair and bring him a passport. He explained that the Romanians kept approaching him to work with them, but he continually refused—until the day of his cancer diagnosis, when he decided to go out with a bang. But then he survived, and convinced himself that the Romanians’ crimes would happen whether he worked with them or not, so it didn’t matter.

Niels then noticed several people watching him from afar: Martha led the police, including Genevieve and Baptiste, to him. He grabbed his mother, pointing a gun to her head, as police surrounded him and onlookers scattered. As he madly yelled, Martha rifled in her purse to grab a weapon. Baptiste shouted, “No, Martha!”—and Niels shot his mother in the head, killing her. He got off one more shot, hitting Baptiste—his father—in the arm, before he himself was apprehended. He’ll be in prison for life.

Genevieve visits Lucas, her lover who was paralyzed by Constantin after she sent him into the Romanian gang undercover. She says goodbye, then tells Lucas’s wife that she won’t come again. As she walks away, Lucas’s wife shouts after her: Genevieve should keep visiting. Lucas needs someone to read to him.