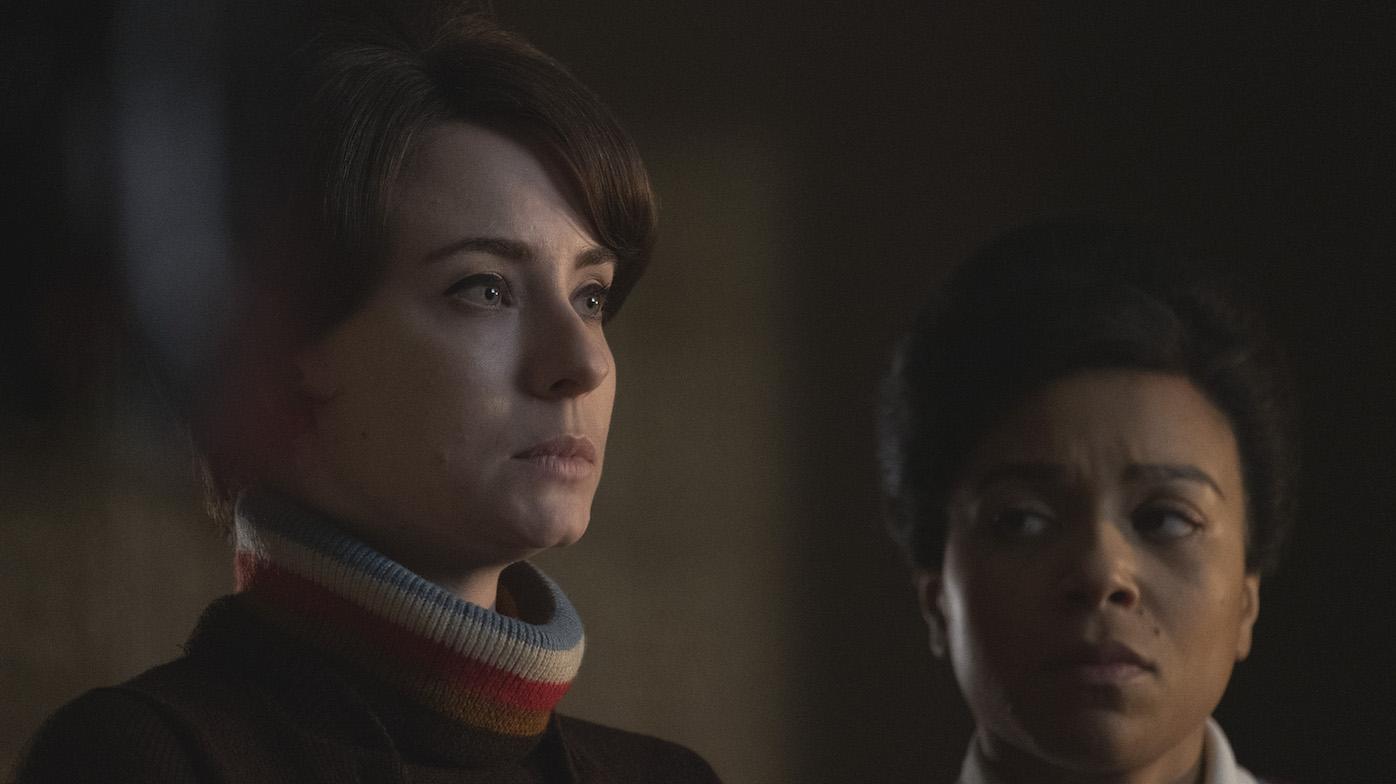 Valerie struggles with guilt as she is put in charge of her gran's care. Photo: BBC / Neal Street Productions

Call the Midwife airs Sundays at 7:00 pm and is available to stream for a limited time. Recap the previous episode and the following holiday special, and read recaps of the previous three seasons.

Petra Bevan and her mother are excited: they’re at Violet’s shop ordering Petra’s wedding dress, which has to be ready sooner rather than later since Petra is pregnant. Her fiancé, Eddie, is looking for an apartment for them so that they don’t have to live with her mother.

Bonnie Medlar doesn’t put much stock in marriage. She’s farther along in her pregnancy than Petra, but she doesn’t feel the need to marry. She does want her boyfriend, Eddie, present at her birth, which she wants to do without drugs at home. She switched to the maternity clinic from the hospital because of the hospital’s impersonal approach.

Despite the contrast between the midwives’ and the hospital’s care, however, Sister Julienne has received word that the budget for Nonnatus House has been halved. When she asks the Board of Health why, they respond that the hospital’s expansion of its maternity ward is making the midwives less necessary. Plus, the local council has decided to make the Nonnatans pay full, instead of reduced, rent.

Less budget, more rent: not a feasible combination for the survival of Nonnatus House.

Sister Julienne and Nurse Crane visit Violet at the clinic during her drop-in hours as a councilor and plead their case. While a relaxation class for new parents—including Bonnie and Eddie—takes place outside, Violet promises to try to get them a hearing before the Board of Health.

Suddenly, there’s a commotion in the relaxation class. Petra and her mother have come to the clinic to chastise Violet for ordering the wrong color fabric for Petra’s wedding dress and discovered that Petra’s Eddie is the same as Bonnie’s—he’s dating and has impregnated both of them.

Bonnie takes this revelation surprisingly well, saying that she’s worried about Eddie because she knows he doesn’t like hurting people. She’s less equanimous when she ends up in the same room at the maternity clinic with Petra. Bonnie has a headache and high blood pressure; Petra has had some bleeding and might soon have a miscarriage. Worse, Eddie marches in and hands Bonnie flowers before realizing that Petra is there, too. He quickly leaves, embarrassed. 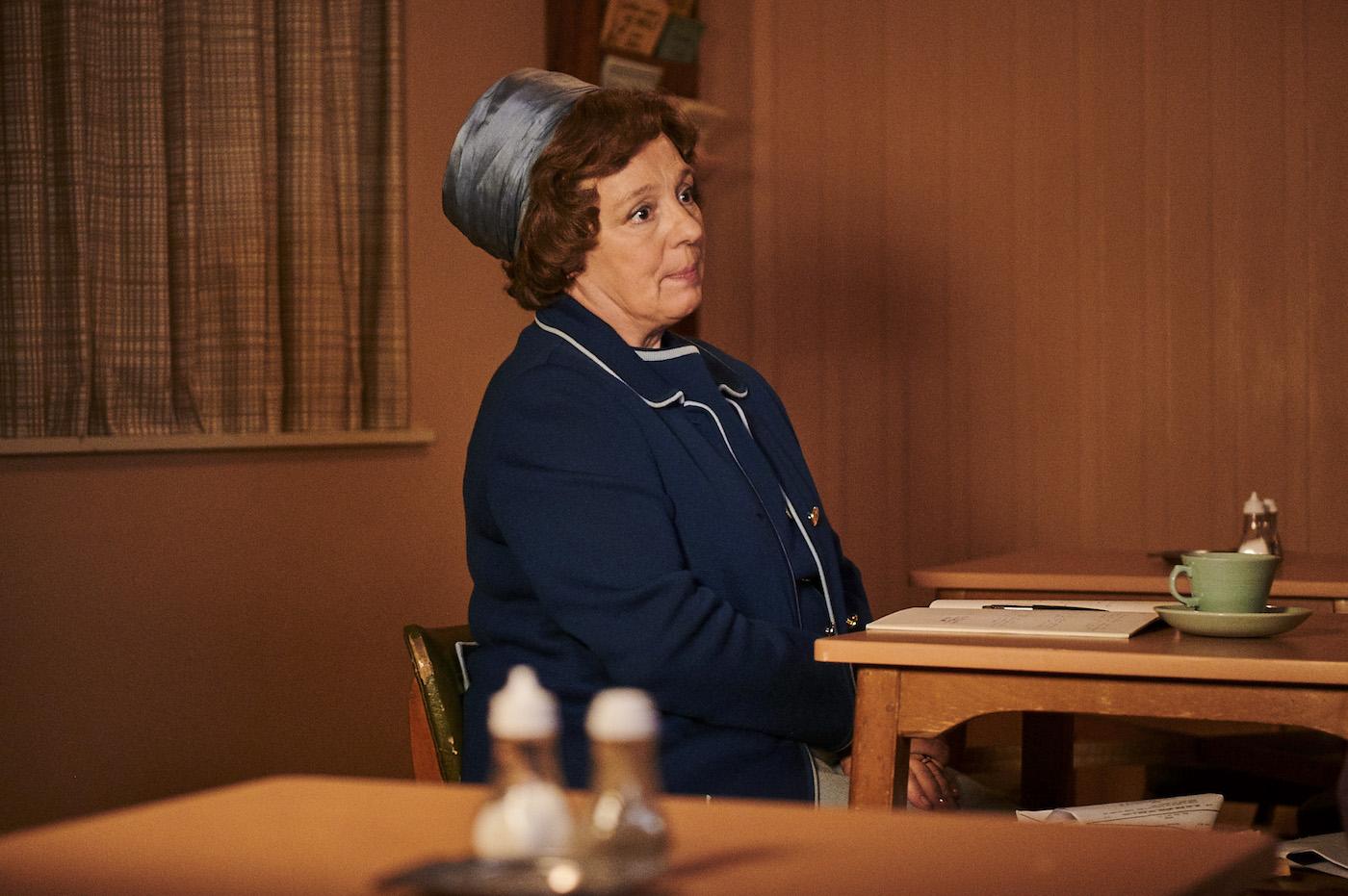 Finding him waiting outside, Nurse Crane talks to him. He says he longs for the home life he would have with Petra—he doesn’t have any family left—but that Bonnie is unlike anyone else he’s met. Nurse Crane tells him that he has to let the women decide what to do now.

Valerie is worried about her gran’s health—with due cause: when she visits the prison, her gran has been transferred to the hospital wing. The care there is not exceptional, however, and the nurses believe Valerie’s gran when she says she’s eating, even though Valerie knows she’s having trouble swallowing. She will be released from the hospital wing.

But later Trixie tells Valerie that she saw her gran being wheeled into the hospital on a gurney. When Valerie visits at the hospital, her gran dismisses any concern. But Valerie reads her charts: she vomited blood, she’s anemic, and she has esophageal cancer.

Valerie discusses the diagnosis with Sister Julienne and Dr. Turner, who tell her that her gran is being released from prison. She was already being considered for parole, and now she is dying. She’ll go back to her flat—which is now in a condemned building—and Valerie will be in charge of her, as she’s listed as next-of-kin. Sister Julienne gives Valerie a leave until this has passed, and says that the midwives will nurse her gran; Valerie should focus on caring for her.

Even though she’s in pain, Valerie’s gran refuses to take painkillers as she lives out her days in her old flat. She tells Valerie that the girls to whom she gave illegal abortions never got anything for their pain, so why should she? Valerie admits to Trixie that she feels responsible for the illness: maybe it wouldn’t have happened if she hadn’t helped send her gran to prison.

Sister Monica Joan visits Valerie and her gran, along with McNulty. As Monica Joan reminisces about Valerie’s own birth in that very room, Valerie refuses McNulty’s offer of pethidine, since even the mention of painkillers upsets her gran. He pockets the medicine—he’s still injecting himself with it, even though the clinic and Nonnatus have instituted new drug sign-out procedures because of “discrepancies.”

Remembering a past birth reminds Sister Monica Joan of a trove of letters from grateful mothers to the midwives of Nonnatus: useful evidence to bring to the Board of Health hearing. While the midwives only have five minutes to present, they have hundreds of letters and decades of treatment records to draw upon, as well as a petition with more than 600 signatures. 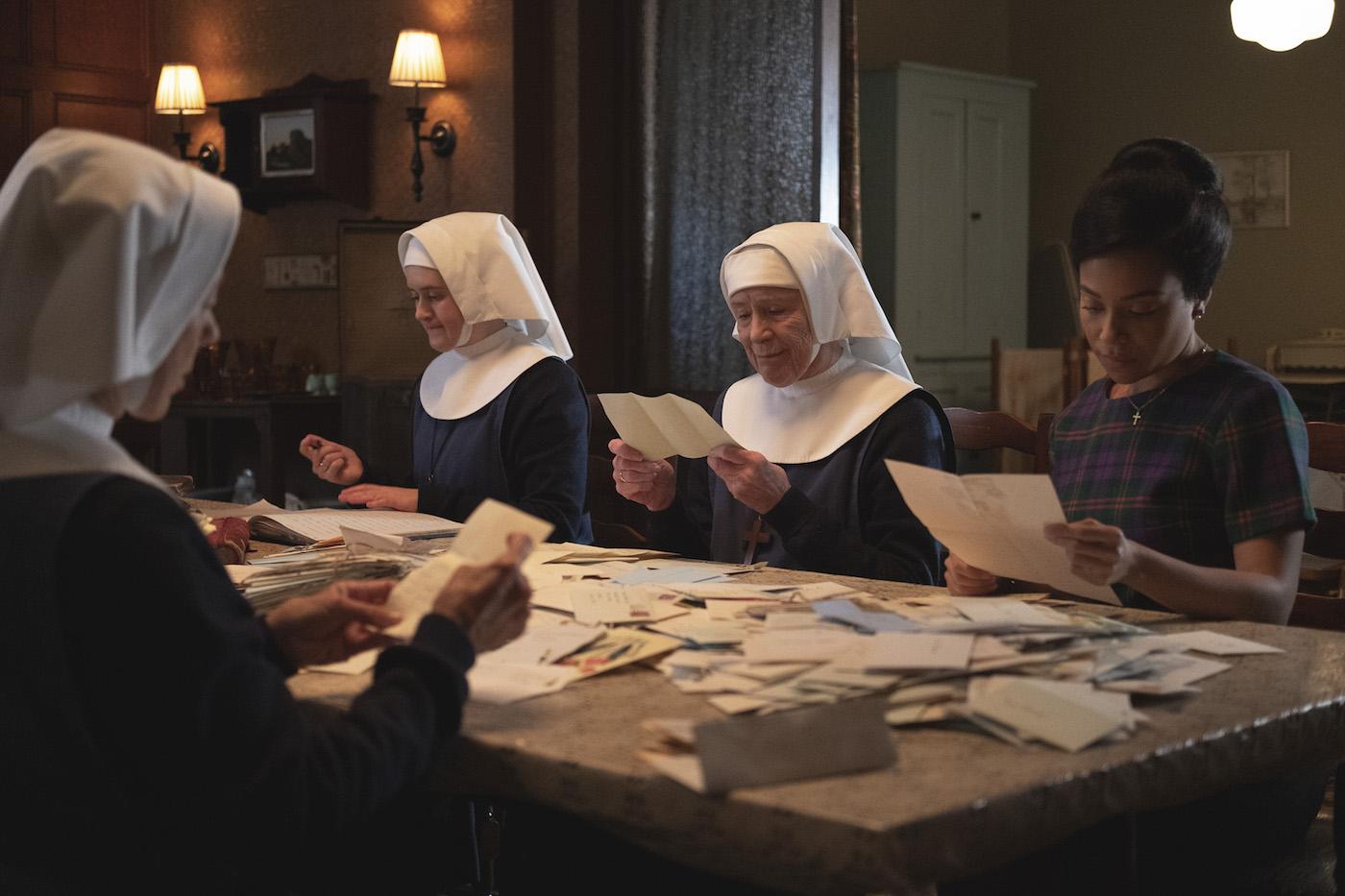 Sister Monica Joan remembers a trove of letters to the midwives from grateful mothers, useful for the Board of Health meeting. Photo: BBC / Neal Street Productions

Supported by sign-bearing demonstrators, Trixie makes a forceful speech about the importance of individual stories and names over simple statistics. The Nonnatans are granted reduced rent and a full budget—but only for twelve months.

For now, they’re still doing their work. Bonnie has gone into labor, and asks for Eddie to be there. He’s helpful and supportive. Outside the door, Petra listens. She has already told Bonnie that, while she loves Eddie, she is not going to fight over him. While Bonnie gives birth to a girl, Petra has a miscarriage. She will let Eddie be with Bonnie.

Valerie’s gran finally relents and says she will take painkillers. She asks for two last things as she fades: a minister, and for Valerie to wear her midwife uniform. She’s never been so proud as when Valerie became a midwife.

Back at the surgery, Miss Higgins asks McNulty about the stock of pethidine: records say he has been using it on Valerie’s gran, but now Miss Higgins has heard that this is the first time Valerie’s gran is taking it. McNulty, violently shaking, says the records are wrong, then collapses. Miss Higgins calls Dr. Turner.

Having revived McNulty and learned of his addiction, the Turners have brought him to their home. The young doctor will be going to a clinic for treatment. He says he took to the drug because there were so many people he couldn’t help, lives he couldn’t save. Dr. Turner gives him hope: it’s the failures, the crashes, that make you a better doctor.

Lucille brings Cyril to minister to Valerie’s gran, who sends Valerie out to buy herself an ice cream, just like when Valerie was a girl. While Valerie waits in line, Cyril and Lucille sing. Right before Valerie returns, her gran dies.