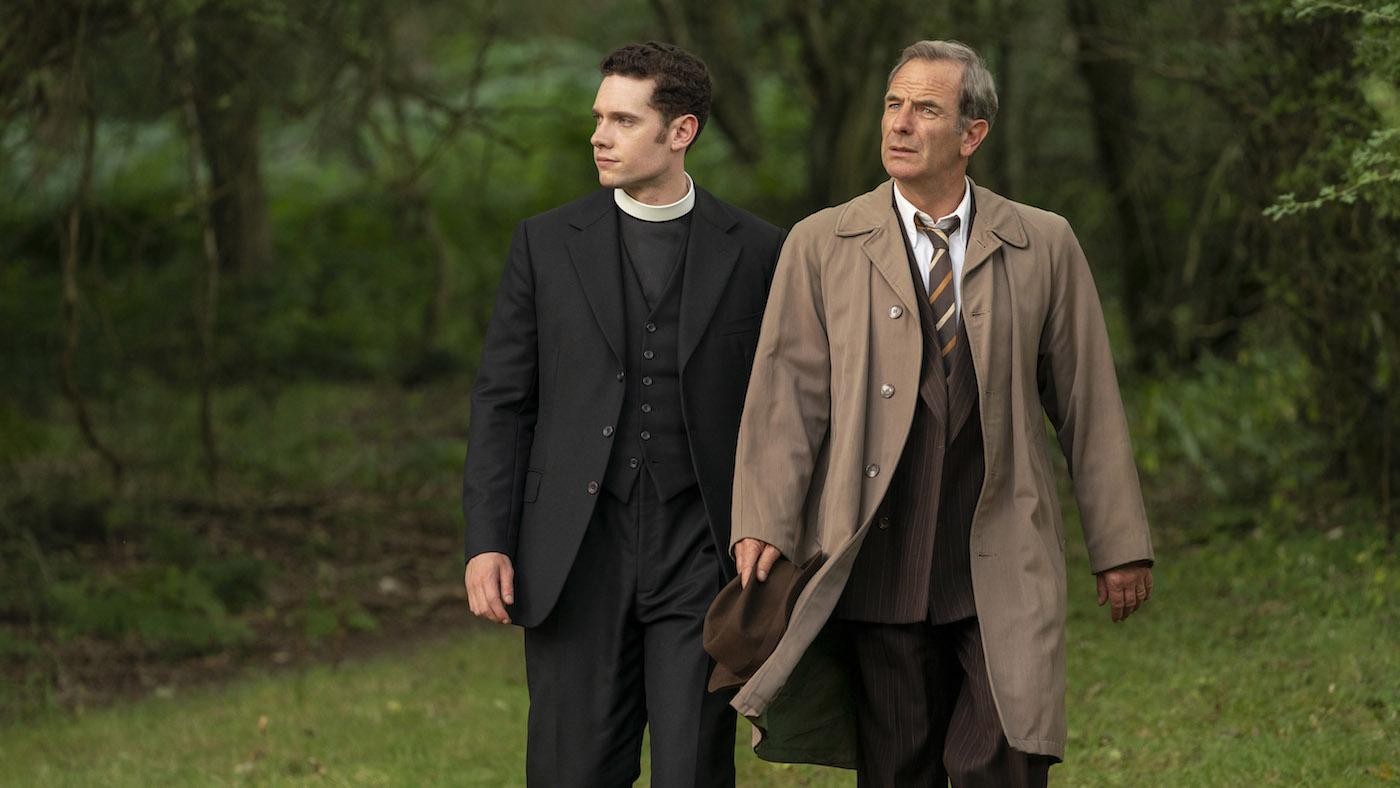 Will and Geordie investigate the death of a woman at one of the few female colleges at Cambridge. Photo: Kudos/ITV/Masterpiece

Grantchester airs Sundays at 8:00 pm and is available to stream. Recap the previous season finale and the following episode.

A young woman from one of the few female colleges at Cambridge has been found dead in a stream that runs through the campus. She’s still in a gown that she wore at a ball at another college the previous night. When Geordie and Will arrive at the scene, they find another young woman distressed by the death. “Vronky”—short for Veronica—was a friend of Jessica, the dead woman. She was with Jessica the night before—they had drunk a lot—but lost track of her before returning to her own college before curfew.

Her college is run by a proud feminist named Andrea Shaw. Andrea takes an immediate dislike to Geordie, but Will smooths over their interactions. All of the women who went to the ball signed back in to their rooms before curfew, she tells Geordie, although the sign-ins are all in the same handwriting—but she trusts her students. Geordie and Will speak to them, but none of them share anything useful.

In Jessica’s room, Geordie and Will discover a baggie of pills—uppers. They find the same thing in Jessica’s handbag. The postmortem determines that she was killed by a blow to the head—someone tried to make her death look like an accidental drowning.

To get a better sense of which women stayed at the ball late, despite their sign-in at their college, Will has the idea of checking the “survivor’s photo,” a portrait taken at the end of the ball featuring everyone still left. It shows both Jessica and Vronky—even though Vronky said she left earlier.

Will and Geordie return to Cambridge. They hear someone yell, “Help!” from an open window, and rush in to find one boy bleeding, another on the floor, and a third on top of him. The attacker flees when Will and Geordie arrive and Will gives chase, catching him—he’s a server helping set up for the upcoming women’s college ball. He tells Will he was attacking the boys because he thinks they killed Jessica. Geordie calls to Will, and the server takes the excuse to sock Will and escape.

The two boys who were beaten tell Will and Geordie that Jessica and Vronky did come back to their room, where they listened to music before leaving. The misogynistic boys are resentful that the women “led them on,” and slander the women’s secret “Valkyrie club” as a pale imitation of the men’s drinking clubs.

Disgusted, Will and Geordie leave the boys and visit Vronky to ask about the inconsistency in her story. She admits that she didn’t come back to her college as early as she told them—she didn’t want to be judged as “easy.” Jessica left her with the boys, and then Vronky later returned and signed in all the girls. She and Jessica were both on their way to becoming members of the Valkyries, and one of the rules of the club was that the first woman back to the college signed everyone in.

As Will and Geordie are leaving Cambridge, they spot a group of the other women who attended the ball—whom they now know are all Valkyries—huddled in the trees. They’re burying various items: ties from boys, pins, and another baggie of pills. Heather, the ringleader, says Jessica gave her the pills and Heather didn’t want them, while the other items are from the girls’ ex-boyfriends.

Will and Geordie track down the server who attacked the two boys at Cambridge. His name is Matthew, and he knew and liked Jessica from serving at various events that she attended. Matthew has had a difficult life, and his father is dead.

Will sympathizes: his own father recently committed suicide. His mother now lives in a flat alone, and is struggling to adjust to her reduced circumstances and the loss of her husband. Over lunch at the vicarage with Mrs. C and Leonard, who has just returned from a trip to Morocco with his lover, Daniel, Will chastises his mother for complaining: she has plenty of good fortune in her life.

Both Mrs. C and Leonard later admonish Will in their own way for being hardhearted. Eventually, Will sees their point and apologizes to his mother. She is in a brighter mood: she has begun seeing someone, and she’d like Will to meet him.

Will has met someone new: the enterprising reporter Ellie Harding. She hounds Geordie for reports, and Will initially dislikes her, thinking her a gossip taking advantage of other people. Overhearing Will and Geordie discuss Jessica at a pub, she suggests they look into Andrea Shaw, the principal of Jessica’s college. Andrea once slashed a younger male colleague’s tires when he was promoted over her. Ellie also suggests attending the college’s ball for clues—she could be one of their dates. Will likes the idea, but Geordie shoots it down. 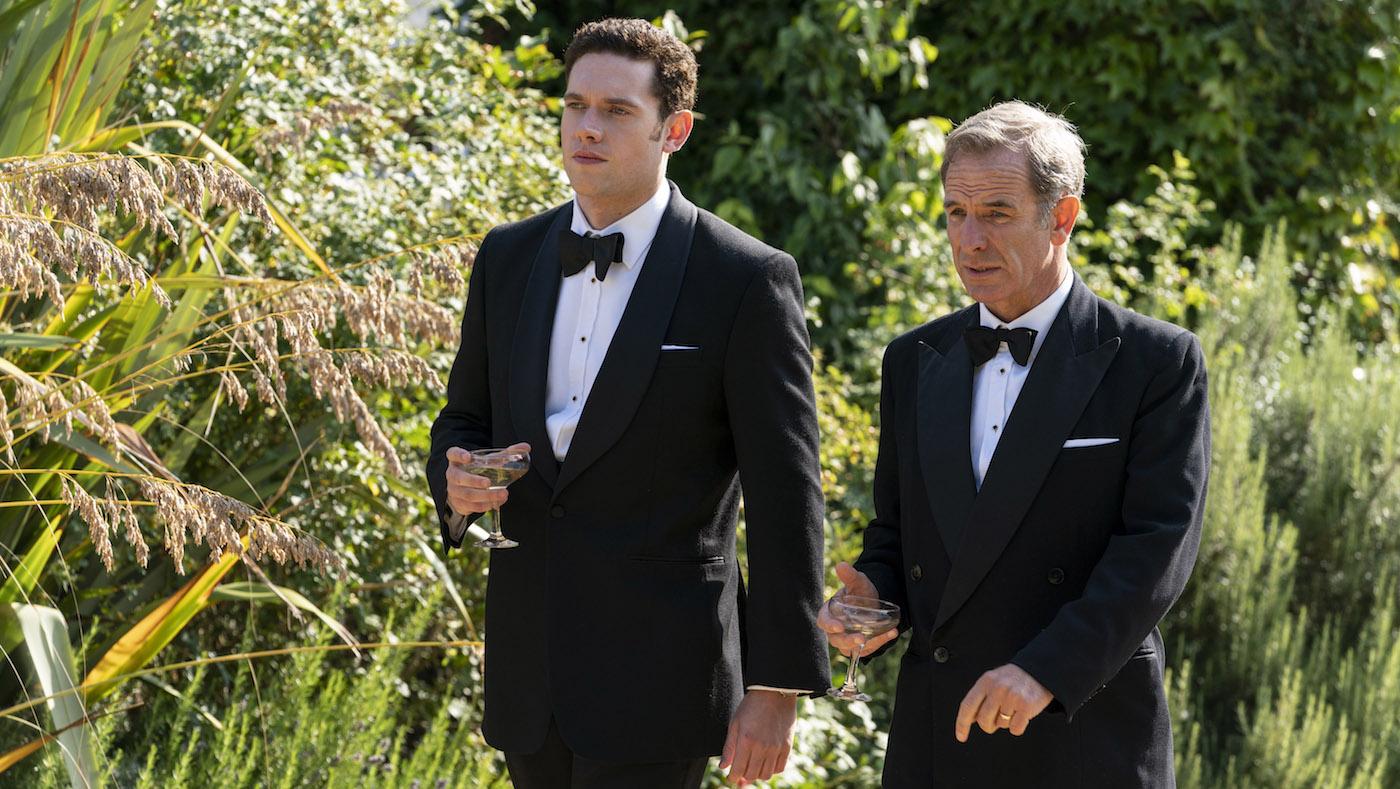 Will and Geordie attend the ball at the women's college to learn more about Jessica's death. Photo: Kudos/ITV/Masterpiece

Instead, they attend the ball stag. Geordie sees Andrea surreptitiously handing students something and interrupts her, thinking it’s pills. No; just condoms.

Vronky asks Will to dance with her. While they dance, she notices someone in Jessica’s window. Will rushes to the room: once again, it’s Matthew. He tries to punch Will, but this time the vicar parries, and Matthew drops a cufflink. It was his father’s—he was retrieving it from Jessica’s room. He gave it to her because she needed it to join the Valkyries: they require members to sleep with several boys and leave with a trinket.

Matthew was forced into a room with Jessica by the other Valkyries—he gave Jessica the pills to help her study, and the Valkyries threatened to turn him in. Jessica was kind, however, so he gave her the cufflinks without any physical intimacy.

When Will and Geordie reveal all this to Andrea, she lectures the Valkyries, but Heather argues back that they’re just having fun while they can; the world is so limited for women that they won’t have many more chances, even though they are attending a top college.

Later, Will notices that his pocket square is missing—Vronky must have taken it. He, Geordie, and Andrea find her outside with the Valkyries, saying she slept with Will—she really wants to join the Valkyries. Watching this, Will realizes that she killed Jessica. Jessica left her alone to an awful experience of sexual assault with the two boys after the ball, and when Vronky left she was upset with Jessica and hit her in an act of rage, accidentally killing her, and then tried to cover her tracks by putting Jessica’s body in the stream.

Andrea asks if the boys will be brought to justice—they are just as responsible as Vronky. But Will and Geordie know the law won’t reach them. Later, Andrea sends Jessica some reading for prison: Virginia Woolf’s A Room of One’s Own.

Will knows the justice system is unfair, and he pleads with Geordie to give Matthew a break. Instead of sending the boy to prison, Will asks Geordie to send him to a boxing trainer who helps reform wayward juveniles. He’ll raise the money to support it. Geordie agrees.