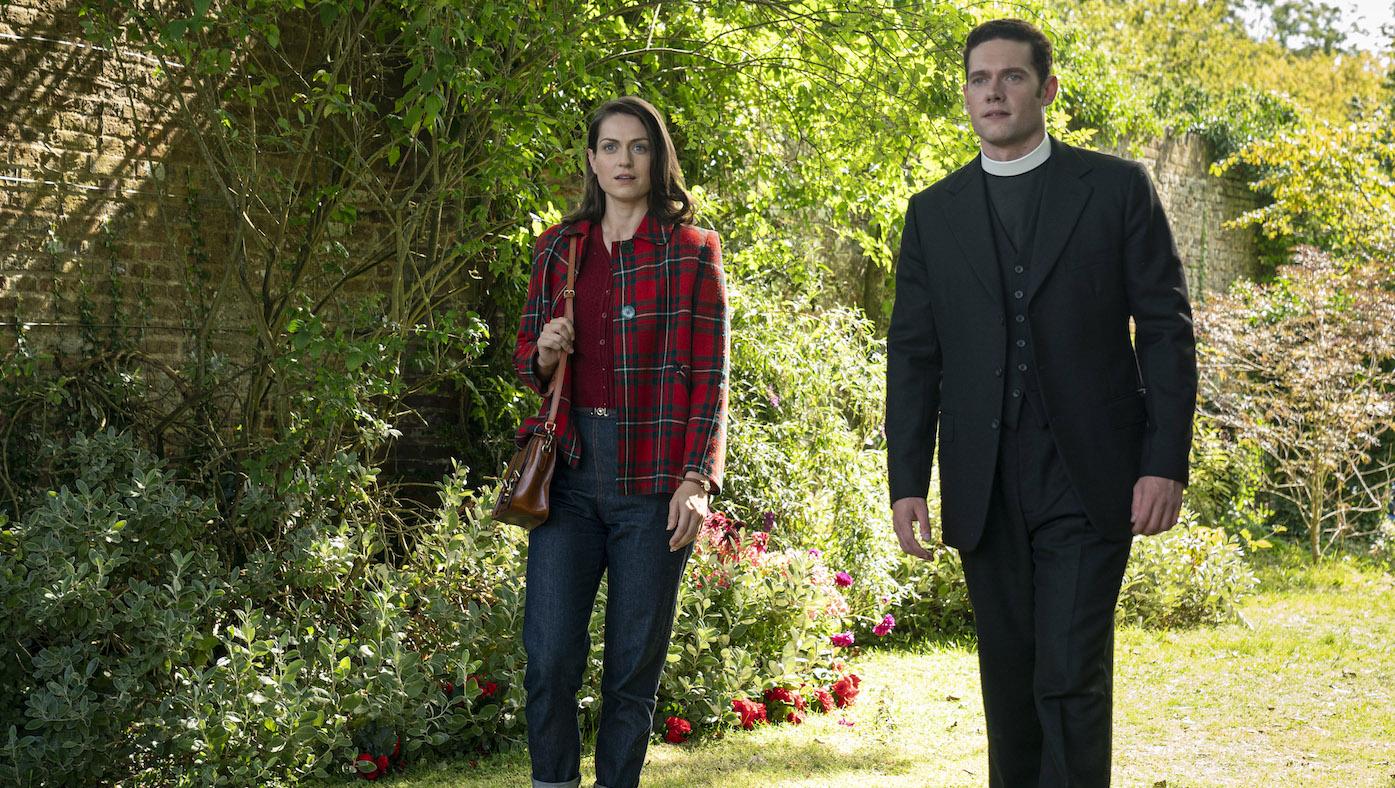 Ellie ends up helping Will interview a subject in a crime when she shows up looking for a lead. Photo: Kudos/ITV/Masterpiece

Grantchester airs Sundays at 8:00 pm and is available to stream. Recap the previous and following episode.

Geordie is regretting inviting his mother-in-law to move in and help out as Cathy becomes more involved in her job at the department store. She monopolizes the bathroom, and he has lost his coveted alone time.

Will also has familial issues: he has met his mother’s new beau, St. John, and found that he belittles his mother. And yet: Will’s mother and St. John are engaged. As Will shares his dislike of St. John with Leonard while on a walk, a car speeds past them and strikes a man carrying white orchids, then zooms off. Will and Leonard rush to the man and find him dead.

The dead man was named Dicky Astor, and he left behind a widow, Jacqueline. He was an investment broker for wealthy clients, his young female assistant admiringly tells Geordie and Will. Geordie discovers a hidden ledger in Dicky’s office and realizes he was stealing from his clients.

Despite witnessing the hit-and-run, Will has struggled to remember details—until suddenly the license plate number comes back to him. The plate is registered to an out-of-the-way address, a fine estate home. A gruff old man named Harry Graham answers the door, then yells at another old man who is lurking on the stairs to go back to his room.

Harry begrudgingly shows Will and Geordie the car for which the license plate is registered, telling them he has barely used it in the past twenty years. And yet: there is a dent on the front of the car.

Harry was listed in Dicky’s secret ledger, so Geordie asks about his business with Dicky. Harry replies that Dicky was a distant cousin, “not distant enough.” He was a con artist, but Harry’s brother John—the man he told to stay in his room—fell for Dicky’s scheme, and the elderly brothers lost their savings. Harry was furious. Given that motive and Harry’s temper, Geordie brings him to jail.

Will has purchased a television for the vicarage, to Mrs. C’s disapproval. But the novelty proves alluring when Leonard tests it out, and she sits and watches a program with him. Leonard wants her to leave sooner rather than later, however, as he is planning to watch TV and eat dinner with Daniel—without Mrs. C’s knowledge, since she is unable to accept his homosexuality.

After their pleasant evening together, Leonard asks Daniel to stay the night. Having witnessed Dicky’s death, he now wants to make sure he enjoys his life. In the morning, he makes breakfast and runs into Will while bringing it to Daniel in bed. He hesitantly tells Will that Daniel has stayed the night—and then Mrs. C announces her presence downstairs. Will distracts her as Leonard sneaks Daniel out.

Cathy also faces disapproval in her home. She is now shop steward of her union, and, while Geordie is proud of her, her mother calls her a Communist. Later, she criticizes Cathy for neglecting her duties as a wife and mother by getting a job that doesn’t even pay that much. 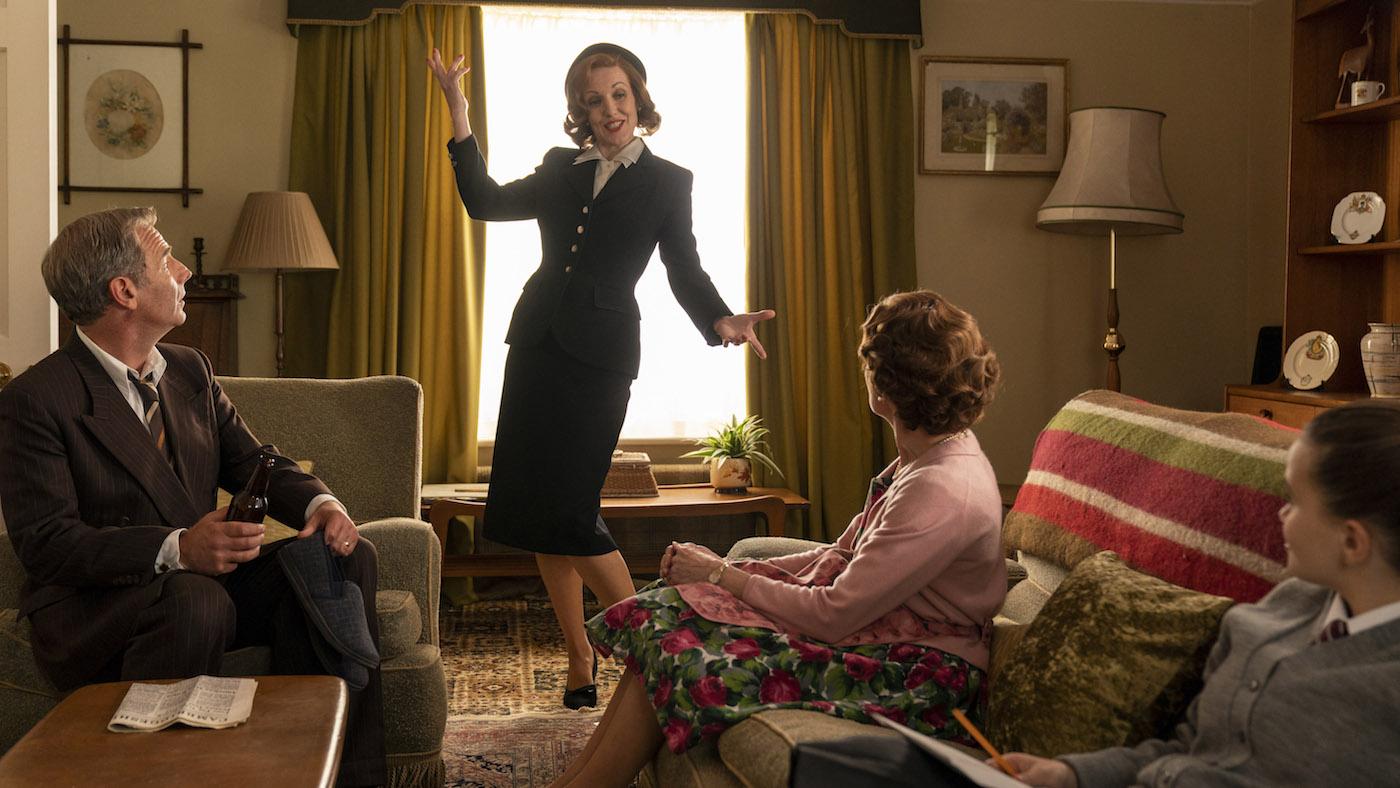 Cathy loves her job, but her mother disapproves of it. Photo: Kudos/ITV/Masterpiece

Will decides to talk to John Graham, to learn more about the Grahams’ relationship with Dicky. When he arrives at the Graham house, he finds the reporter Ellie Harding waiting for him. She’s been flirting with the young policeman Larry, and learned of Will’s plan. Will has taken a liking to her, so he lets her join him

Except no one answers the door, so they decide to climb the garden wall. In the lovingly tended garden they see Jacqueline Astor with John. She leaves, and Will and Ellie emerge from behind a tree to talk to John. Ellie masterfully relaxes John by asking about his garden, which he clearly treasures.  He gives her some white orchids—of the same kind that Dicky was carrying when he died. But when Will tries to ask about Dicky, John turns hostile and flees to the house.

Later, Will finds Jacqueline waiting for him in church. She asks Will to tell Geordie that Harry couldn’t have killed Dicky: she knows him and he wouldn’t do such a thing. She says Dicky treated Harry and John “despicably,” and that she no longer loved her husband.

Geordie asks Harry—who’s still in jail—if John suffers from shellshock. Having witnessed John’s temper, Will has suggested he might have been the one to run Dicky over. Harry admits that John has had a hard life: his fiancé left him after he returned from the war, and he would have been sent to an asylum had Harry not taken him in and watched over him. He says he hasn’t seen John drive in years, and that if John were to be locked up, he’d be “as good as dead,” given his issues.

Geordie and Will bring Harry home and find John yelling and attacking his garden with an axe, upset that Harry has been gone for so long. Harry calms him, and asks him to go with Geordie and Will.

John tells them that Dicky was a bastard; he didn’t deserve the orchids he took. When Geordie asks him point-blank if he ran Dicky down, John says yes.

After the admission, Larry bursts in: the orchid’s scientific name referneces Aphrodite, the goddess of love—it was a crime of passion! It makes Will wonder whom Dicky’s flowers were for, since Jacqueline said he wasn’t sentimental. He and Geordie go to speak to Dicky’s young secretary. When she sees them, she runs, clutching several bags.

They catch her—the bags are full of money. She was having an affair with Dicky; he was saving money for them to move to London. She didn’t kill him: she can’t drive, and she loved him.

Will and Geordie have a realization. They go to the Graham garden and find Jacqueline there. She admits that she was going to leave Dicky, having learned of his affair, but the prospects for a middle-aged woman on her own were slim. She borrowed the Grahams’ car to leave, and saw Dicky walking in the road with orchids. She wanted to frighten him, and then her anger drove her to kill him.

Geordie tells Cathy he’s proud of her for her job, and that he’s okay with her mother-in-law now, given that she brings him food and beer and his slippers. He hands Cathy a bouquet of orchids.

He also starts to set Will up with Ellie, calling her over at the pub then leaving the two of them alone. She apologizes for being so driven to find leads: she has to fight twice as hard to be successful as a woman.

And Will decides to tell his mother than St. John is wrong for her. He tells her St. John belittles her, like his late father, and he doesn’t approve of the engagement. She retorts that she’s finally happy; maybe Will is the bully.