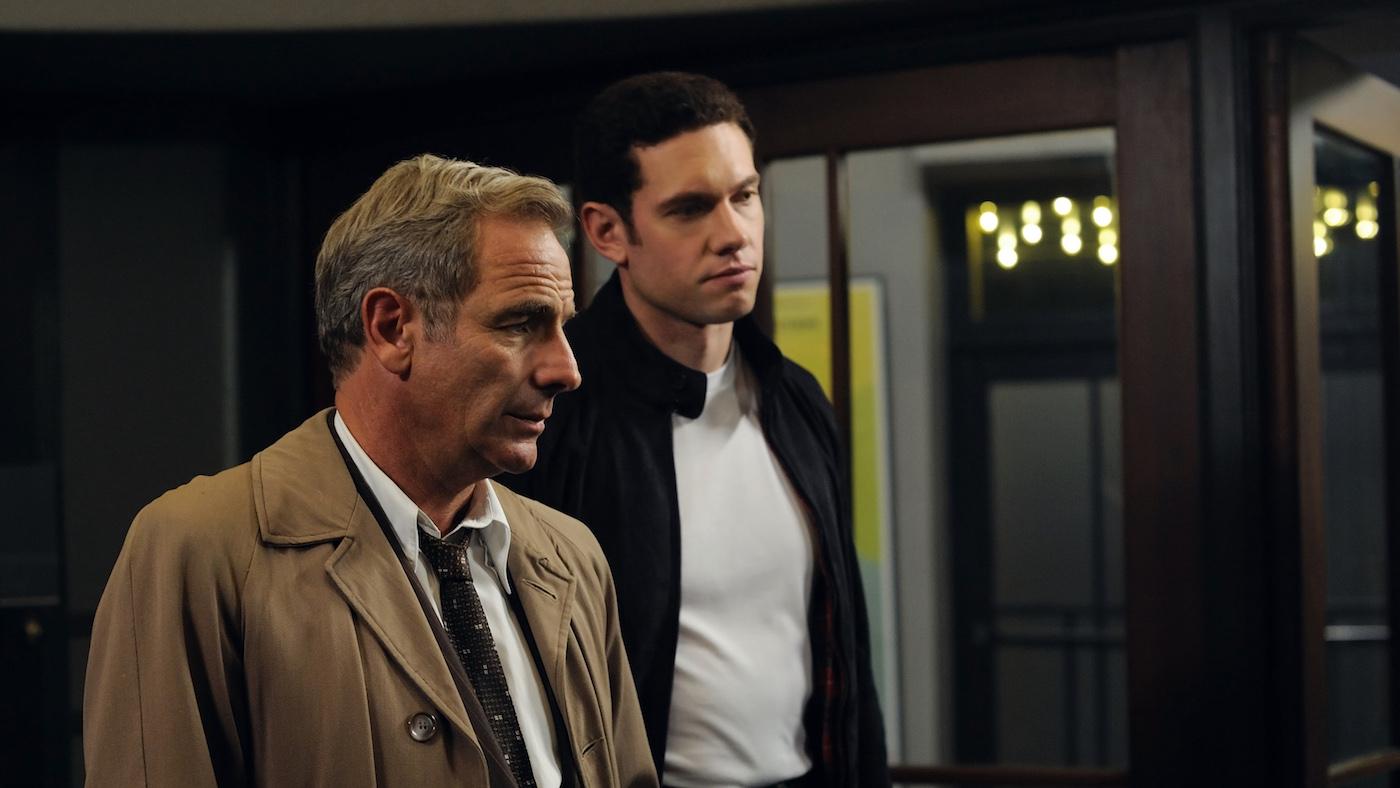 Geordie and Will investigate a murder at a movie theater. Photo: Kudos/ITV/Masterpiece

Will fears his mother has disowned him, after he told her he didn’t approve of her engagement. He is, however, advancing his relationship with Ellie Harding, planning a date with her to the movie theater.

Geordie has already been to the theater, for a reported break-in. Betsey Granger, who works there, saw an Indian man inside; he quickly fled. There’s leftover food in the projection room that the projectionist, Wyatt Rogers, says isn’t his. Between that and a broken lock on the front doors, it’s apparent that someone has been sleeping in the projection room. Wyatt, an American screenwriter who has been blacklisted, breezily brushes away the issue.

At the theater, Will and Ellie meet Vic, the boxing coach, and his wife. Matthew, the troubled young man whom Will convinced Vic to take in, is also there with some friends. Betsey tries to flirt with Will while selling concessions, and Matthew does the same with Ellie, but it just seems to draw Will and Ellie closer. Suddenly, the film stops. Betsey goes to check on Wyatt and screams.

Will rushes to the room and finds Wyatt on the ground, his head smashed in. When Geordie and Larry arrive, Larry is upset that Will is on a date with Ellie—he had also taken a liking to the reporter. Geordie speaks to Betsey and Edwin Parker, the nervous young usher. Betsey says she didn’t know Wyatt well; she was a typist, and has only been working at the theater for a month. Edwin says he may have seen an Indian man just before Wyatt was killed. A distinguished service medal from the Indian army is found in Wyatt’s pocket.

The same evening, Mrs. C and her husband Jack are relaxing in their parlor when a brick crashes through their window. Mrs. C glimpses an Indian man outside before he flees. Earlier in the day, Jack saw him standing in the street outside their home, although he doesn’t mention this to Mrs. C.

An Indian man is found sleeping in a hayloft and is brought into the police. He has the same last name as that on the medal. Tariq Hassan only arrived in England last week; he doesn’t trust the British at all. He demands to have the medal—it is his father’s. It must have fallen out of his pocket when he was sleeping in the projection room. He denies killing Wyatt, but is mute on the charge of smashing the Chapmans’ window.

Will and Geordie search Wyatt’s apartment. It looks like an American movie set, with a baseball set, a dented Remington typewriter, a teddy bear. Wyatt seems to have been a womanizer: he has a chest of female headshots, and there’s a champagne glass with lipstick on it. One of the headshots is of Betsey.

Betsey admits she was dating Wyatt. She didn’t say anything at first because she didn’t want to upset the fawning Edwin, “that creep.” She says Wyatt was kind to her; he took the headshots for her and other women to send to a Hollywood friend. She gives Geordie the letter she received from the agent, a Marcus Remington.

As Will and Geordie are leaving the theater, they see Matthew stealing money from the cash register. Will is sure there’s an excuse, but then Matthew flees. Catching up to him, Will asks what he’s doing. Matthew flips him off and dashes off.

Will and Geordie find him at Vic’s boxing gym. Vic says Matthew might have been stealing for him—the boy knows that funds are tight. But Matthew says he threw the money away, so Geordie arrests him.

Will gathers up the stolen amount from his own funds and turns it over to Geordie, telling him he found it in Matthew’s locker. Since the money has been returned, can Matthew be let go? Geordie demurs. Will then speaks to Matthew in his cell. Why is the boy doing this? Is everyone expecting too much of him? Matthew doesn’t want to talk.

Geordie brings in Mrs. C to identify Tariq from a line-up. Jack urges the police not to press charges, arguing that it’s the Christian thing to do: Tariq looks disheveled and deluded, not criminal. That means there’s nothing against Tariq, because he broke the window at the same time Wyatt was killed, so he can’t be the murderer.

When Tariq is released, Mrs. C meets him and buys him a meal. She’s not oblivious; she wants to know how he knows Jack. He says Jack was a civil servant in India. During Partition, he ferried families across the newly created India-Pakistan border—for a price.

Tariq’s father was delayed and Jack wouldn’t wait, so Tariq’s family left without his father. His mother gave Jack her emerald engagement ring in order to return and find her husband. She never heard from Jack or her husband again. Tariq just wants to know if Jack ever found Tariq’s father.

Mrs. C is shocked. She didn’t know Jack served in India, and knew nothing of the violence of Partition. She takes her emerald engagement ring off her finger and gives it to Tariq, telling him to return it to his mother. She then confronts Jack at home. He says there were different rules in India, and admits Tariq’s father didn’t survive. He was trying to give Tariq’s mother hope. Mrs. C is furious and distraught.

Larry discovers that Wyatt is survived by a sister—who lives in England. He wasn’t American at all. His parents died when he was young, and he was separated from his sister. A photo of them as children shows him holding the same teddy bear found in his apartment. Geordie thinks he was scamming women, pretending to have Hollywood connections, but Will thinks he was just a fantasist trying to build a kind world.

Betsey confirms Will’s theory: Wyatt didn’t charge for the headshots. He was a generous man, letting Edwin watch films for free—management didn’t want to hire the nerve-wracked boy, so he worked for free. Wyatt gave Edwin Tariq’s father’s medal, which he found in the projection room, thinking he could sell it. Edwin admits he put the medal in Wyatt’s pocket and that he lied about seeing Tariq, but that Wyatt was already dead.

Will and Geordie realize he was trying to protect Betsey, whom he loved. As a former typist, she saw through Wyatt’s illusion: the fictitious agent was named after Wyatt’s typewriter. When she confronted him, he laughed it off and was relentlessly positive. She felt he had taken her dreams away, so she killed him. Edwin knew what happened but wanted to protect Betsey.

She desperately wants fame: when Will and Geordie come to arrest her, they find her with Ellie and a photographer, posing for a front-page story in the paper.

Will gets Geordie to clear up another issue with the movie theater: he convinces Geordie to get the theater to drop charges against Matthew. Geordie then goes off for a pint with Larry, proud of his good work on the case, while Will goes to a nightclub with Ellie. They dance, becoming ever more intimate, then leave and begin to kiss in an alley.

One thing leads to another… except it doesn’t. Will, remembering his vow of celibacy, reluctantly pulls away, leaving without a word.