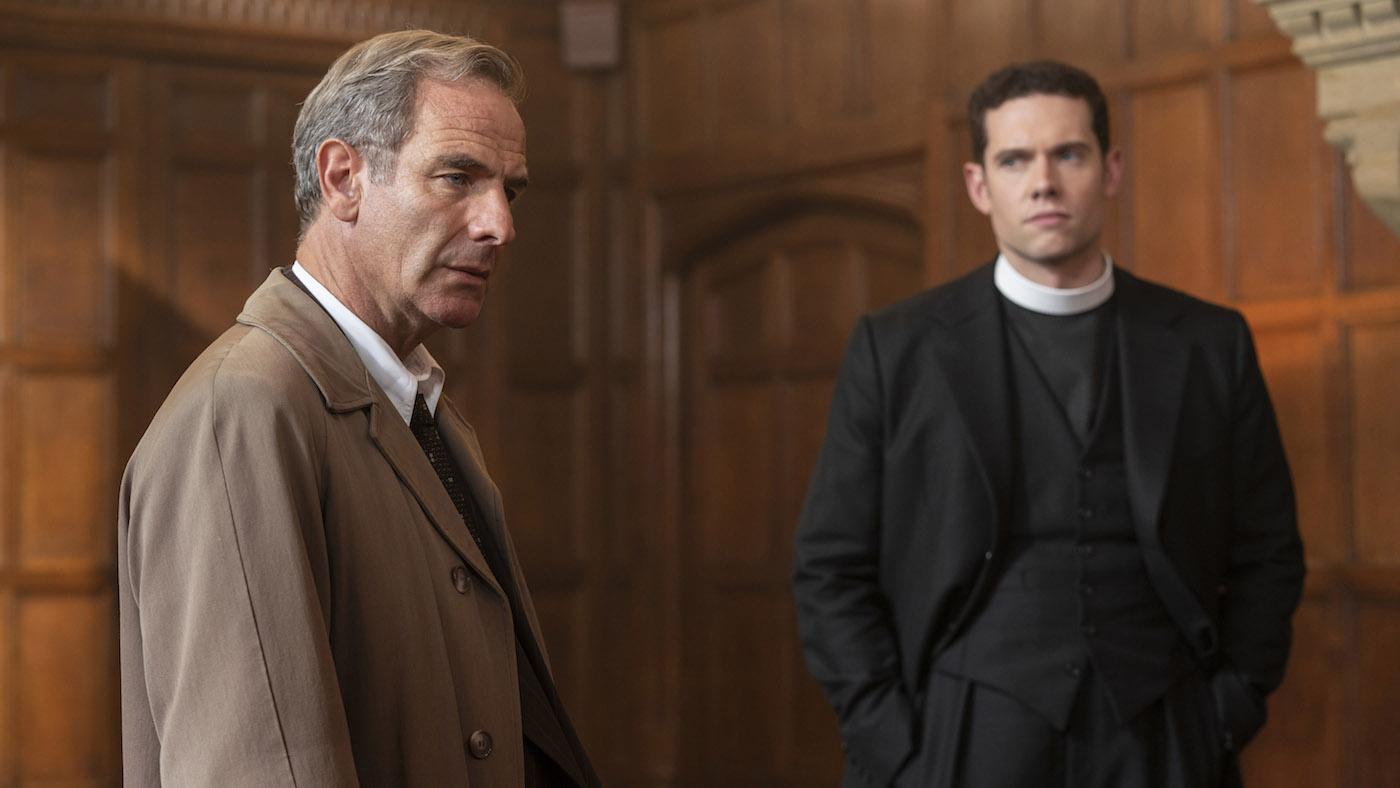 A naked man runs past Geordie and Will in the street. Will stops Geordie from chasing after to arrest the streaker, arguing that it’s simple fun. Later, the man starts shouting that “the aliens are coming.”

When the young man is found face-down in a fen the next day, dead from exposure, Ellie arrives as soon as Will and Geordie. She asks for information, but it turns out she knows more than the police. An anonymous tip to the paper gave her a name of the dead man: Chris Hartley. Geordie makes a date for a reluctant Will with Ellie, to have supper at the vicarage that evening.

Will is afraid to be around Ellie, lest he let himself break his vow of chastity, as he nearly did at the nightclub. There are other worries at the vicarage, too: Leonard notices Mrs. C is no longer wearing her ring or nice coat from Jack, and tries to convince her that God wants her to be happy—but she disagrees, rebutting any citation of Scripture.

Geordie and Will visit Chris’s dorm room and discover it in disarray: someone has turned it over in search of something. Following Chris’s calendar, they go to speak with Judy Monroe, a psychology fellow with whom Chris had recently met. Chris was studying psychology, and was supposed to meet Judy yesterday, but he never showed. Judy says she should have talked Chris out of taking part in a trial led by another professor, Martin Adler, exploring the effects of LSD—maybe that’s what led to him streaking through the streets.

Adler thinks LSD is a wonder drug and says it wouldn’t have driven Chris mad: Adler has used it himself, and the dosages for his research are small. Another student, Remi Adeyemi, walks into Adler’s office then, and Adler asks him to describe LSD’s effects—Remi is also part of the trial. Remi says the experience is peaceful and leads to insight. Adler then tells Will and Geordie that Judy Monroe is just jealous he received funding for research while she didn’t. Plus, he keeps the LSD under lock and key, so Chris couldn’t have taken a larger dose.

Will and Geordie visit the on-campus lab that manufactures LSD for Adler’s research, and they explain that they’re probably the only place in England that makes LSD, and only for Adler. Will and Geordie notice a student worker in the lab—Peter Soosai—wearing the same boating shirt as Remi and ask him about Remi and the trials. Peter admits that Remi paid Peter to make some LSD for him.

Under questioning, Remi says that he and Chris were going to try taking LSD outside of the constraints of Adler’s trial. After he heard about Chris’s death, he searched Chris’s room for the LSD, but couldn’t find it. Geordie wonders if Chris took the whole dose himself, but Will finds that implausible. Chris’s notes in an Aldous Huxley book on drugs are fearful, and his father, who was supposed to visit Chris this week, told Will and Geordie that Chris was timid.

Chris’s girlfriend Helen lends credence to Will. She says she convinced Chris to take part in the trial, and that he was afraid to take LSD outside it with her and Remi. Remi shows up and says that Peter was also planning to try the LSD with them. He explains that Peter was jealous that Chris was dating Helen, and that Peter said he saw the devil during a recent LSD trial. Peter admits that he didn’t like Chris and that the LSD made him abandon his Catholicism. But he wasn’t involved with Chris’s death.

Geordie’s mother-in-law, Diana, is acting increasingly odd. Cathy returns home one day to find her selling off some of her dishware, claiming that she needs more money to run the household. Another time, she discovers that Diana has invited friends that Cathy and Geordie haven’t seen in years over for a fancy dinner. Diana is endlessly chatty during the dinner, babbling about writing an opera, and accidentally lighting the tablecloth on fire while try to prepare a baked Alaska. After the friends leave, Diana takes a sledgehammer to a wall, claiming they need a service hatch.

Cathy has already tried to get her sisters to take care of Diana, but they have refused. Geordie asks her what’s wrong with Diana, and she admits that her mother has always been bipolar. Geordie says Diana needs hospitalization, but Cathy blames herself and says she’ll quit her job to watch Diana. Geordie eventually rejects this plan—Diana is not Cathy’s responsibility. He kindly convinces the panicky Diana to go to the hospital. Cathy cries softly as she watches.

Will has his own issues with his parents, as he tells Judy Monroe while speaking about feeling guilty for preventing Geordie from arresting Chris Hartley, a move that could have saved his life. She offers to set him up with a psychiatrist to work through his problems. She also mentions that Chris’s mother walked out when he was young, and that he had recently had an upsetting trip home.

That evening, after supper at the vicarage, Will apologizes to Ellie for abandoning her at the nightclub. Again, they begin to kiss, and again, he pulls away. She tells him he can’t keep doing this; it’s humiliating.

Will has a realization, and asks Ellie who gave her the tip about Chris Hartley. She says it was a well-spoken female voice. Will goes to Chris’s girlfriend Helen, but she says Adler has forbidden her from speaking about Chris or the trial. When Will visits Adler, he finds out why: the professor is angry about negative coverage of his research in the paper.

Will tells Adler some of the subjects were planning to take LSD outside the trial, and convinces him that helping Will could exonerate his research. Adler says the therapy dredged up memories in Chris, and shows Will a tape of the session. Under the influence of LSD, Chris remembered witnessing his father killing his mother.

Will rushes to Geordie: maybe Chris confronted his father on his trip home, and his father wanted to keep Chris quiet by discrediting him with a large dose of LSD? But when Geordie approaches Chris’s father, he cries. His wife was having an affair, and he tried to stop her from leaving. Things turned physical, but he didn’t kill her. She lives in Bedford, with two sons and a daughter—a fact he never told Chris. He was visiting to finally admit the truth to Chris.

Geordie is angry that Will had him accuse a grieving father of murdering his son. Vic tells Will he’s seeing too much of the dark side of humanity in his detective work. Inspired by Vic’s talk of his love for his wife, Will decides to propose to Ellie. She’s incredulous, and then angry. They don’t know each other, and he can’t use marriage as an excuse to deal with his difficulties around sex.

Leonard comes to Will and tells him that he is going to invite his father to visit, even though they don’t get along. Having learned from Mrs. C that she’s unhappy because of what she has learned about Jack’s unsavory past in India, Leonard has now decided he must confront his bad relationship with his father.

Will has another realization. He goes to Judy Monroe: she was trying to discredit Adler’s research because he got funding instead of her. She dosed Chris with LSD, hoping that an event like him streaking and yelling about aliens would ruin Adler’s reputation and research. Geordie arrests Judy.