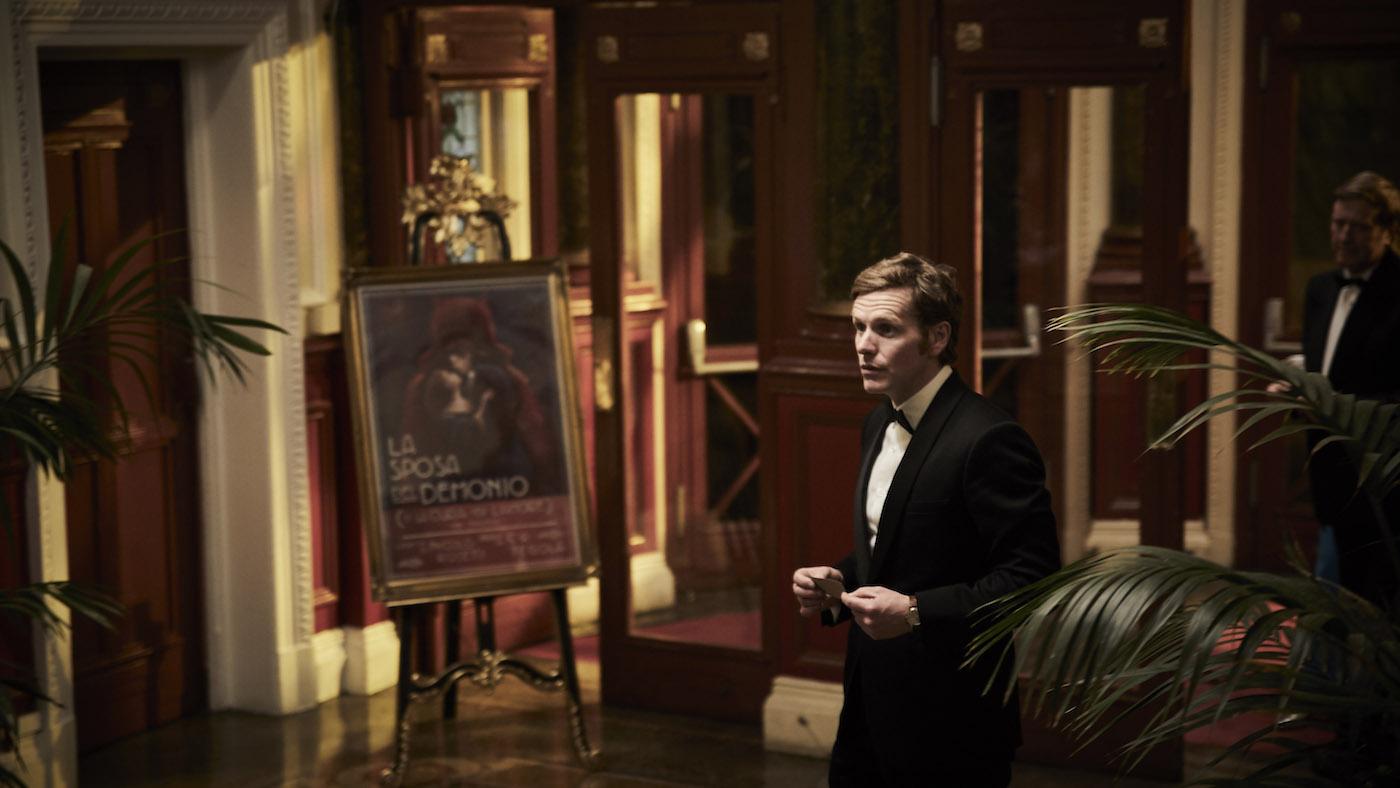 Morse falls for a mysterious woman at the opera while in Venice, but she wants to remain anonymous. Photo: Mammoth Screen

Endeavour airs Sundays at 8:00 pm and is available to stream. Recap the previous season finale and the following episode.

As the 1970s dawn, Morse is in Venice. Enthralled by a woman at the opera, he ends up sleeping with her. While he develops feelings for her, she wants it to remain casual, so he ends up returning to England lonely and longing for her, without even her name.

Back in England, a barmaid named Molly Andrews is found dead on the towpath beside the river on New Year’s morning. Her neck is broken, and her purse is missing. Thursday suspects her boyfriend, Carl Sturgis—they were seen fighting at the bar—but Carl has an alibi, having drunkenly taken a cab home from the pub. As the year stretches into May, Thursday has still been unable to definitively charge Carl, so Bright assigns Morse to take another look at the case.

Morse was away during the initial investigation, so he revisits the details. Someone was heard whistling on the towpath around the time of Molly’s death, and a barge called the Rosie Jugg was seen going down the river in the early hours of the morning—but it’s too long after the fact to track it down now. Morse visits Carl, who claims innocence but tells him he fought with Molly because she had been seen with another man, a “college type.”

A lead seems to pop up when a Doctor Naomi Benford calls the police with a tip, and asks Morse to meet her the following day. He arrives at the appointed Women’s Equal Rights Campaign event to find she has changed her mind—she must first check with someone to see if she can share her information with him. Morse leaves, frustrated, while the reporter Dorothea Frazil tails Naomi: the young scientist has just been named the host of a Higher Mathematics television show.

Naomi has been arguing with the leader of her team, Donald Blish, about sharing with the police something that emerged in their research, but he has refused. Their colleague Dai Ferman agrees with Blish, while the younger, ill-treated Jeremy Kreitsek—a habitual whistler—is too cowed to take Naomi’s side. Like Naomi, all three men auditioned for Higher Mathematics.

Morse goes to a garden concert, and is bumped into during intermission. He realizes his wallet is missing, and chases after the man, who escapes when a bicyclist startles Morse and he trips. A man from the concert helps Morse up, and says he knows him from Oxford, although Morse doesn’t remember him. The man, Ludo, insists on buying Morse a drink, and they return to the concert. Afterwards, Ludo insists on sharing a meal.

He questions Morse about his life but reveals little about his own, other than that his family is in shipping and that he runs a music festival. He’s both charming and strangely friendly.

While Morse is with Ludo, Jeremy interrupts Blish as he yells at Naomi behind a closed door—Blish is upset about Dorothea’s article on Naomi, and that Naomi will be on TV. Naomi later tells Jeremy she’s upset he’s not defending her in bringing evidence to the police.

At home, Thursday gets unduly upset when his wife Win questions his sudden decision to buy two canaries. He’s struggling with witnessing so much cruelty in his police work. 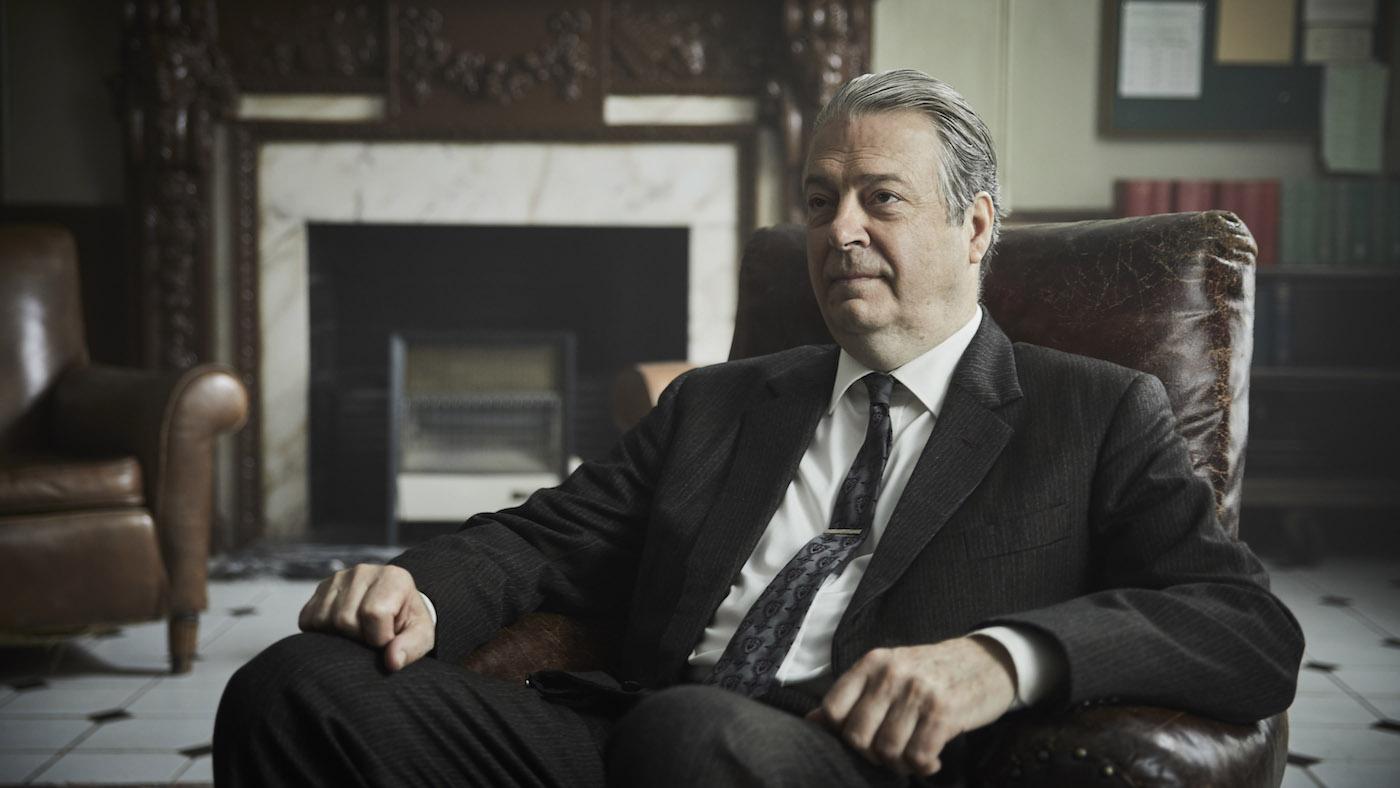 Investigating so much crime is beginning to take a toll on Thursday. Photo: Mammoth Screen

Bright’s home life is also challenging. His dying, cancer-stricken wife has taken to faith-healing: having men pray over her to help cure her.

The next day, cleaners at Naomi’s research building discover Naomi dead at the bottom of the stairs. Her biceps are bruised as though someone grabbed her, and she died from the fall. She was killed sometime Saturday evening—the same day Morse met her.

The police speak to Jeremy and Ferman. They explain that their research is into ESP. They test subjects’ ability to discern hidden flash cards. Morse is skeptical, and Jeremy is insulted by his disdain.

When Morse and Thursday visit Blish at home, he denies knowing anything about what Naomi wanted to reveal to Morse. He’s also revealed as a profound sexist, who won’t let his wife have her own checkbook and was annoyed to have a woman in his research lab.

Dorothea tells Morse that Naomi asked her off-the-record about the murder of Molly Andrews. In Naomi’s flat, Morse finds newspaper clippings about the death as well as a diary with an appointment with a Jen Tate “re: MA” on the day Naomi died.

Jen was a subject of Naomi’s research, who got high scores in testing of ESP. She had a vision of Molly’s death when it happened, and thought Naomi was going to share it with the police—but Blish had stopped Naomi. Jen says she saw Molly’s murder in a vision, although not who did it, and that she tasted blood. She somehow knows Molly was wearing a necklace that was stolen, so the police take her somewhat seriously.

In the evening, while Morse is working on his new home, Ludo drops by with a nice bottle of wine and invites Morse to a party that weekend. As they discuss music, and Morse gives him a rare opera LP, Ludo notices photos of Molly and asks about the murder and robbery. During the war, he saw a girl attacked by a soldier, the necklace ripped from her neck, and it left the same mark as on Molly’s neck. Then Strange shows up to update Morse on some minor developments. He chastises Morse for bringing evidence home, then leaves.

The police again speak to Jeremy and Ferman, to see if they were jealous that Naomi got the TV host position over them. Ferman denigrates women while Jeremy defends them, and Ferman reveals that Jeremy once asked Naomi out but was rejected. They both have decent alibis for her death: Ferman was at pubs, Jeremy seeing a folk singer at a club.

Then the Rosie Tugg is found with a dead man onboard. The boater died of alcoholism. Onboard is Molly’s purse. Inside are tickets to a show by the folk singer Jeremy likes, and a flash card from the ESP research with his name and number.

Jeremy says he didn’t tell the police he had been seeing Molly because he didn’t want Ferman and Blish to know. They would have made fun of him for liking a lowly barmaid who had no talent for ESP—she was kept in the study as a control.

The two older researchers defend not revealing Jen’s vision to the police, dismissing her veracity. Morse is more curious about her now, however, since she has asked him about his sadness surrounding a woman in a green dress—his lover from Venice.

Examining the list of research subjects, Morse notices a distinct ink pattern from the pen Blish used to sign off on each of them. It’s indicative of the pen found under Naomi’s dead body, but she didn’t use that type of pen—it wasn’t in her flat. The police rush to Blish’s office—and find him trying to strangle Jen Tate, lest she share more information with the police.

Blish wanted to be romantically involved with Naomi and asked her out, reading her normal behavior as interest on her part. She politely turned him down. After she got the TV job—a job he wanted—he became angry with her and tried to kiss her. Things spiraled, and her pushed her over the stair railing.

The police believe Blish was having an affair with Molly, and she tried to blackmail him, but he denies having killed her. That claim, at least, might be lent credence by another murder. A man who has been exposing himself to women along the towpath at night is killed. But that’s all we know for now.

At Ludo’s elegant party, Morse notices a familiar figure on a porch. She turns to him, and it’s his lover from Venice. Ludo then appears next to her. “Let me introduce you to my wife,” he says.