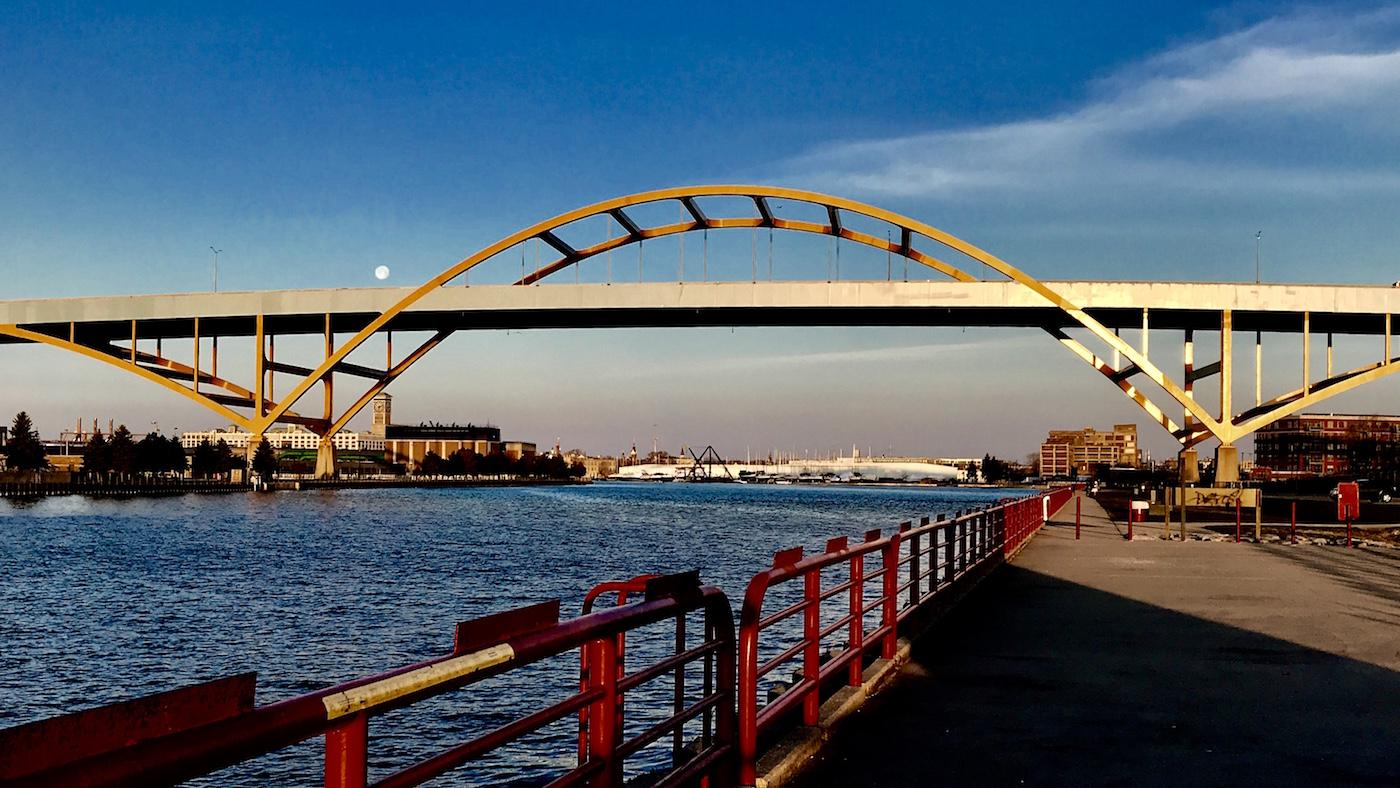 The Daniel Hoan Memorial Bridge in Milwaukee is named after Milwaukee's second, and longest-serving, socialist mayor

When the Democratic National Committee announced in March 2019 that its convention would be held in Milwaukee, the world was very different. Not only was it still feasible to gather in large groups indoors and schmooze in bars without a mask; the Democratic presidential candidate field was still wide open. Joe Biden, now the presumptive nominee, had yet to officially launch his campaign. Some of the farthest left candidates in generations were vying for the nomination, led once again by the self-described “democratic socialist” Bernie Sanders.

Now, more than a year later, the convention has been all but scuttled due to COVID-19, with plans for Biden to accept the nomination virtually when the convention occurs from August 17-20. (The Republican National Convention is the following week, from August 24-27; PBS NewsHour and WTTW News will offer extensive coverage of both.)

Had things turned out differently and Sanders been on track to win the nomination, Milwaukee would have been a fitting place for him to accept it. Milwaukee is the only large American city to have elected socialist mayors—and kept them in power for almost 40 years. And, just as Sanders professes a democratic socialism that he argues is akin to the FDR's New Deal, Milwaukee’s “sewer socialists,” as they were patronizingly called, were more pragmatic than ideological.

Between 1910 and 1960, socialists elected three separate mayors in Milwaukee, as well as state and local legislators and one congressman. Although “sewer socialist” was meant pejoratively, it was, in fact, accurate: their improvement of sewer systems was part of their focus on public health, which also included vaccination campaigns, as well as their investment in public infrastructure such as schools, parks, and housing projects. They also improved workplace safety and hiring practices.

Despite the public projects, they were also known for frugal budgeting and admirable integrity—unlike politicians in nearby Chicago and Illinois. “They never were approached by the lobbyists, because the lobbyists knew it was not possible to influence these men,” a Republican colleague said of the Socialists.

Milwaukee’s socialist party was rooted in a progressive German association from the mid-19th century called the Turnverein, or Turners. The movement was grounded in physical fitness but also valued intellectual and liberal political engagement. All three of Milwaukee’s socialist mayors were Turners.

As workers fought for rights in the turbulent labor conflicts of the late 19th century, including in Wisconsin, where National Guardsmen killed seven people during a strike for an eight-hour workday in 1886, political support for leftist parties grew. As Dan Kaufman recounted in the New York Times, a Milwaukee schoolteacher named Victor Berger decided to try to form a socialist party modeled on those in his native Europe. In 1895, he visited the labor leader Eugene V. Debs—who was in prison in Woodstock, Illinois, in connection with the historic Pullman strike—and gave him a copy of Karl Marx’s Capital. Soon after, the two men helped found what became the Socialist Party.

Seidel had just lost re-election as mayor of Milwaukee against a joint Democratic-Republican candidate. A tradesman, he had been elected in 1910 on an anti-corruption wave along with twenty-one aldermen and fourteen state legislators from his party. (Carl Sandburg served as Seidel’s personal secretary.) Seidel was the country’s first socialist mayor; Berger became its first socialist congressperson the same year.

Seidel’s term may have been short, but his legacy was picked up in 1916, when Daniel Hoan won the mayoralty. Under Hoan, Milwaukee built the first municipally sponsored public housing project in the country—Seidel himself lived there. (Despite their utopianism, the Garden Homes were originally restricted to Whites only, although Hoan, unlike the racist and xenophobic Berger, apparently took stands against racism.)

During his tenure, which lasted until 1940, Hoan supervised the creation of Milwaukee County’s park system and continued the public-focused investment of Seidel. “Yes, we wanted sewers in the workers’ houses,” Seidel wrote in a memoir. “But we wanted much, oh, so very much more than sewers. We wanted our workers to have pure air; we wanted them to have sunshine; we wanted planned homes; we wanted living wages; we wanted recreation for young and old; we wanted vocational education; we wanted a chance for every human being to be strong and live a life of happiness.”

The next—and final—socialist mayor after Hoan was Frank Zeidler. First elected in 1948, his tenure ironically coincided with that of the Wisconsin Senator Joseph McCarthy. In 1950, McCarthy launched his infamous crusade against Communists (somewhat accidentally, it so happens). But Zeidler outlasted McCarthy, who was formally condemned by the Senate in 1954 and died of alcoholism in 1957. During all the redbaiting of his fellow politician, Zeidler managed to win re-election twice.

“Despite hostility from both parties and the press, Zeidler proved to be a highly effective mayor,” wrote Kaufman. “The business magazine Fortune ran a series on the best-run American cities and ranked Milwaukee second.” (Time had given Milwaukee under Hoan similar praise.)

Facing violent threats on account of his support of Black Milwaukeeans—he made a point of offering the first homes in a new public housing project to one White and one Black family, and rumors spread that he was encouraging Southern Blacks to move to Milwaukee—Zeidler decided not to run for another term in 1960. He was the United States’ last major socialist executive leader.

With the popularity of Bernie Sanders and especially younger progressive politicians such as Alexandria Ocasio-Cortez, it may not be long before Zeidler loses that title.