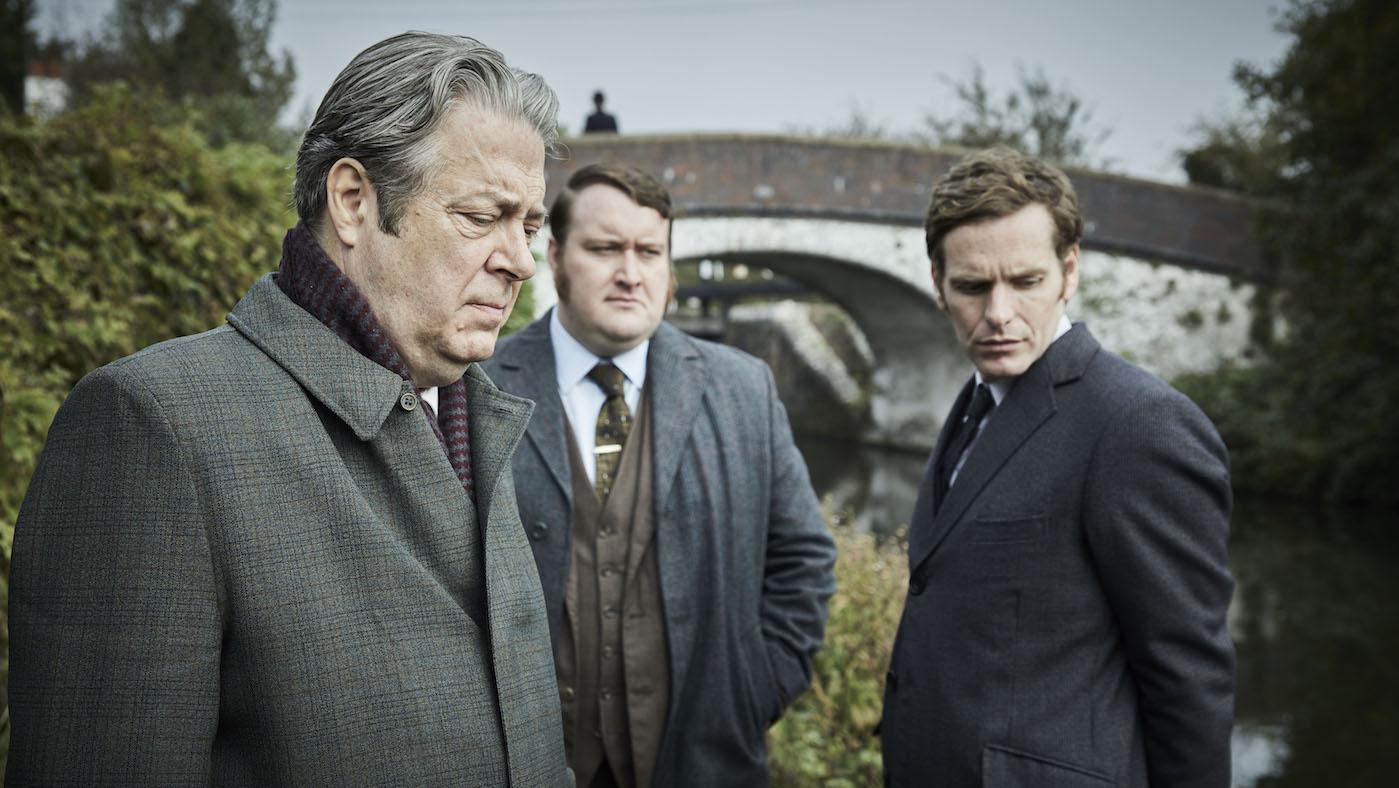 Disagreements over more murders on the towpath lead to an angry split between Thursday and Morse. Photo: Mammoth Screen

Endeavour is available to stream. Recap the previous episode.

The latest victim to be found dead on the riverside towpath is Bridget Mulcahy. Once again, whistling was heard around the time she was killed, although this time the murderer bit her and tried to suck her blood. Thursday arrests Carl Sturgis, the boyfriend of the first victim, Molly Andrews—Thursday’s initial suspect. Sturgis knew both Molly and Bridget, and he whistled the same tune when Thursday tailed him as that heard by the towpath. The second victim, a cook exposing himself to women, was probably killed because he infringed on Carl’s territory.

With Carl awaiting trial, Bright tells Thursday he regrets trusting Morse’s instincts that Carl wasn’t the murderer. Morse still isn’t sure, however: the necklace ripped from Molly’s neck hasn’t been found in Carl’s possessions, and he has some decent alibis. Thursday and Morse argue bitterly.

But then another young woman is killed on the towpath. Petra Connolly was a student at the all-female Lady Matilda’s College. Petra’s tutor, Maggie Byrne, shares that Petra had recently submitted a formal complaint against the misogynistic Dai Ferman, a professor at another college, for groping her, but he pleads innocence.

While examining the crime scene, Thursday tries to distinguish Petra’s murder from the others, thus proving his arrest of Carl correct. Morse argues with him, insulting his ability as a detective. The back-and-forth grows so intense that Dr. De Bryn and Strange have to angrily chastise the two men. Morse tells Thursday he will apply for a transfer as soon as the case is solved.

Bright is furious about this new development, because now Carl will be released—and all this on the day that his wife returns from the United States, where she was undergoing experimental treatment that seems to have sent her cancer into remission.

Although Thursday has continually dismissed his concerns, Morse is still looking into a spate of seemingly accidental deaths. Dorothea Frazil has discovered more accidents, farther afield from Oxford. They all involve falls, and Morse has found that several of the people killed had just cashed out their life insurance.

For clues on the towpath killings, Morse goes to Jen Tate, the woman who claimed to have had a vision of Molly Andrews’ murder. She wants to be left alone, but is panicky and continually glances at a room. Inside, Morse finds crucifixes and a painting of a menacing figure—the object of Jen’s terrifying visions. Tinfoil covers the windows. Jen asks Morse not to tell anyone—she doesn’t want to be institutionalized.

She also tells Morse of a troubling childhood. Her cousin would torment her and her siblings. They lived above a pub, and everyone in her family but her died in a terrible fire.

Morse asks Dorothea to look into the newspaper archives for news about the fire. She comes up with a story that matches the details, although Jen must have changed her name. She and her two siblings were orphans who lived with their aunt’s family. They were all killed in a fire that was blamed on the girl who survived—Jen. At the same time as the fire, a neighborhood boy named George Fontayne went missing. George has never been found.

Meanwhile, another accident has occurred—this time at Lady Matilda’s College. A faculty member fell from a ladder in a library, knocking down a heavy bust that smashed her head in. It happened around midnight—but the lights in the library were off, suggesting someone was there after the fall. The woman had recently cashed in on life insurance to buy a house.

Thursday still refuses to see a pattern in the accidents, and takes Morse off the towpath case for continuing to look into them. He has also requested that Morse be transferred as soon as possible.

Maggie Byrne and the Lady Matilda women decide to take matters into their own hands; no more of them will die. Maggie walks along the towpath at night. When she is attacked, a large group of women with flashlights emerges and chases the assailant, who runs into the street and is hit by a car.

It’s not Carl Sturgis, but rather the man who found Molly Andrews’ body. His flat was filled with newspaper clippings about Molly’s murder. He’s in a coma now. One strange note: he was whistling a different tune than that heard around the other assaults.

Meanwhile, Morse has been carrying on an affair with Violetta for months. They meet in the apartment of one of Violetta’s friends, who is abroad. Ludo has approached Morse in distress, concerned that his wife is having an affair. Suddenly, he calls Morse and asks him to meet the following day.

At the appointed restaurant, Morse is surprised to see Violetta there with Ludo. Ludo explains that he had tried to reach Morse recently and pretended to be a policeman with urgent business. Morse’s station gave Ludo a phone number, which Ludo recognized. When he called, Violetta picked up.

Now that Ludo knows about the affair, Morse asks Violetta to go with him. But she chooses the wealthy Ludo instead, saying she never felt anything for Morse. Money is a powerful motivator. 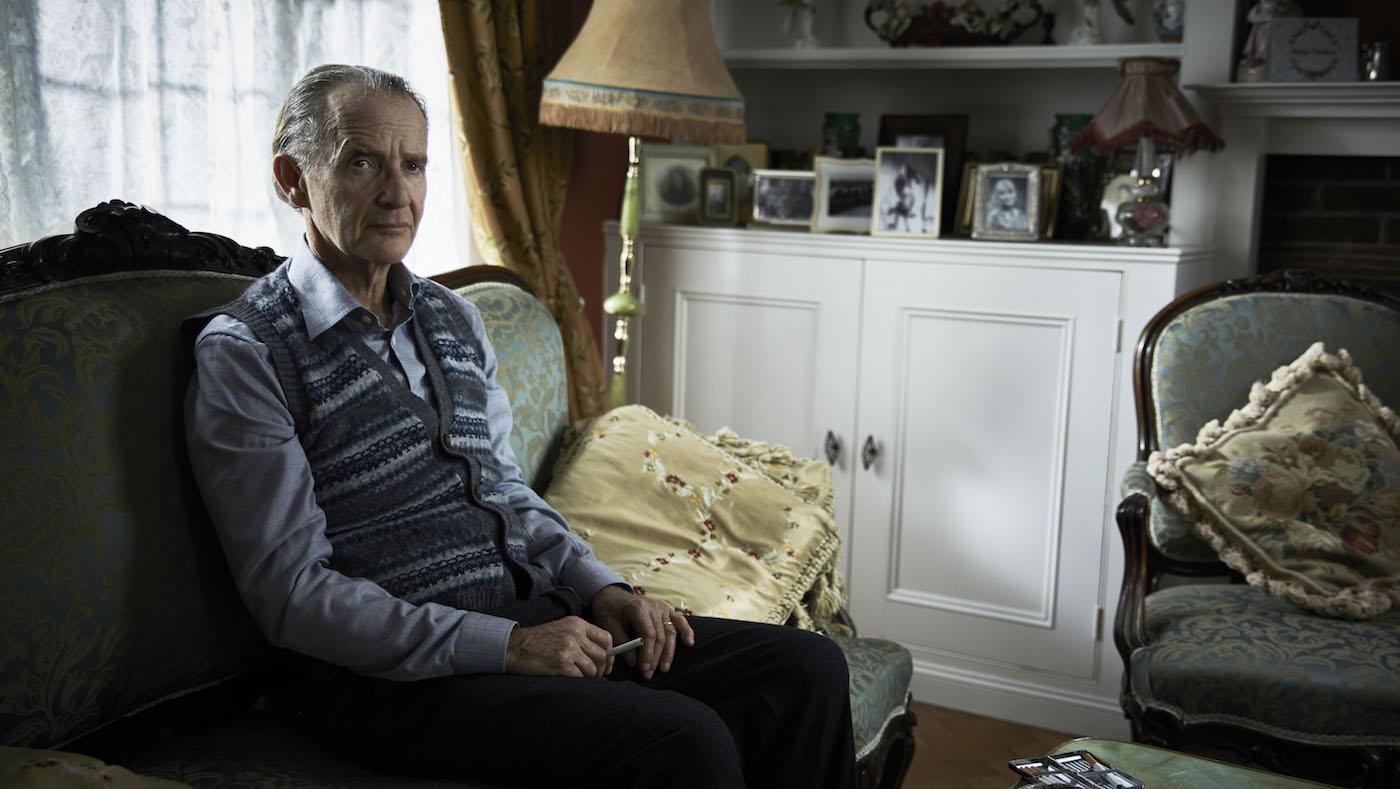 Bright suffers a devastating loss when a mysterious pattern investigated by Morse strikes his own home. Photo: Mammoth Screen

Dorothea calls Thursday with distressing news: Bright’s wife has died in an accident, an electrocution while hanging Christmas lights. Morse thinks it’s part of a scheme, like the other accidents: a company buys someone’s life insurance policy to give the person fast cash, then stages an accident and collects on the insurance. Morse tells Strange his theory and enlists his help, sending him to the site of a recent accident.

Morse goes to speak with owner of the pub that Jen’s family lived above. The owner remembers Jen’s brother as having a nasty streak, especially towards animals, and mentions that it probably came from the Sturgis side of the family.

Strange pulls up to a nice home, the site of a recent fatal fall, and is surprised to find Carl there. Carl says he’s watching the home for a friend. While he makes coffee for Strange, he whistles the tune people heard along the towpath. Strange sneaks off to look upstairs, and finds Jen Tate tied up in a room. As Morse pulls up outside, Strange gestures to him through the window—and Carl stabs him.

Morse rushes in and searches for Carl, who jumps on Morse. In a brief tussle, Morse throws Carl off him, and Carl falls down the stairs to his death.

Strange will recover from the stabbing. Jen, too, is at least physically safe, although Carl bit her forearm.

As an employee of the undertaker, Carl knew that this house was vacant, and so had shacked up in it. In a backroom, there are dismembered animal corpses—as well as Molly Andrews’ necklace.

Carl was Jen’s brother. Morse surmises that his cruel streak—perhaps magnified by the tormenting by his cousin—evolved from animals to humans, and that he killed George Fontayne, then set the fire to cover his tracks, and pretended to perish in it. As Thursday suspected, Carl killed Molly and Bridget, as well as the cook, who had intruded on his territory. The man who killed Petra and attacked Maggie must have had something awakened inside him by seeing Molly’s corpse, and was a copycat killer. Jen’s visions may be some mental connection with her brother or simply a vestige of childhood trauma.

Continuing to look into the freak accidents, Morse recognizes one electrocuted woman as Violetta’s friend, whose flat they were using for their affair. He then realizes that the names of the areas in which accidents were clustered spell out “Ludo.” He tries to ask the disconsolate Bright if his wife had recently cashed in her life insurance, but Bright is angered by Morse’s insinuation of foul play. Thursday chastises Morse—and brings up that he knows Morse is having an affair with a married woman, having witnessed them by the towpath. Morse and Thursday part on bad terms.

Yet when Thursday visits the grieving Bright on Christmas, Bright tells Thursday to apologize to Morse—he lost his temper, and his wife did in fact cash out her life policy to pay for treatment in the U.S.

At home, Thursday has received a letter from Morse via his daughter Joan. Morse apologizes to Thursday and praises him, then lays out his evidence in the life insurance scheme—and his plan to stop it.

Returning to Venice at the New Year, Morse once again finds Violetta at the opera, and confronts her. She says she tried to tell Morse—obliquely—about Ludo’s wrongdoing and her forced part in it, and couldn’t have been more forthright or Ludo would have killed her. She offers to bring Ludo to Morse, as long as Morse gives her 24 hours before arresting her.

She gives Morse a map of a cemetery with a meeting location. There, he finds Ludo, who has learned of Violetta’s plan to turn him in. Ludo says Morse was supposed to be his useful policeman friend, and then Violetta appears and he puts a gun to her head. Morse puts his gun down, and Ludo lets Violetta go.

Suddenly, Ludo moves to shoot Morse, but Violetta jumps in the way, taking the bullet. Thursday, who has followed Morse to Venice, shoots at Ludo, who flees. Cornered by Thursday on a pier, he tries to shoot Thursday but the policeman kills him first. Violetta dies in Morse’s arms. It’s over.