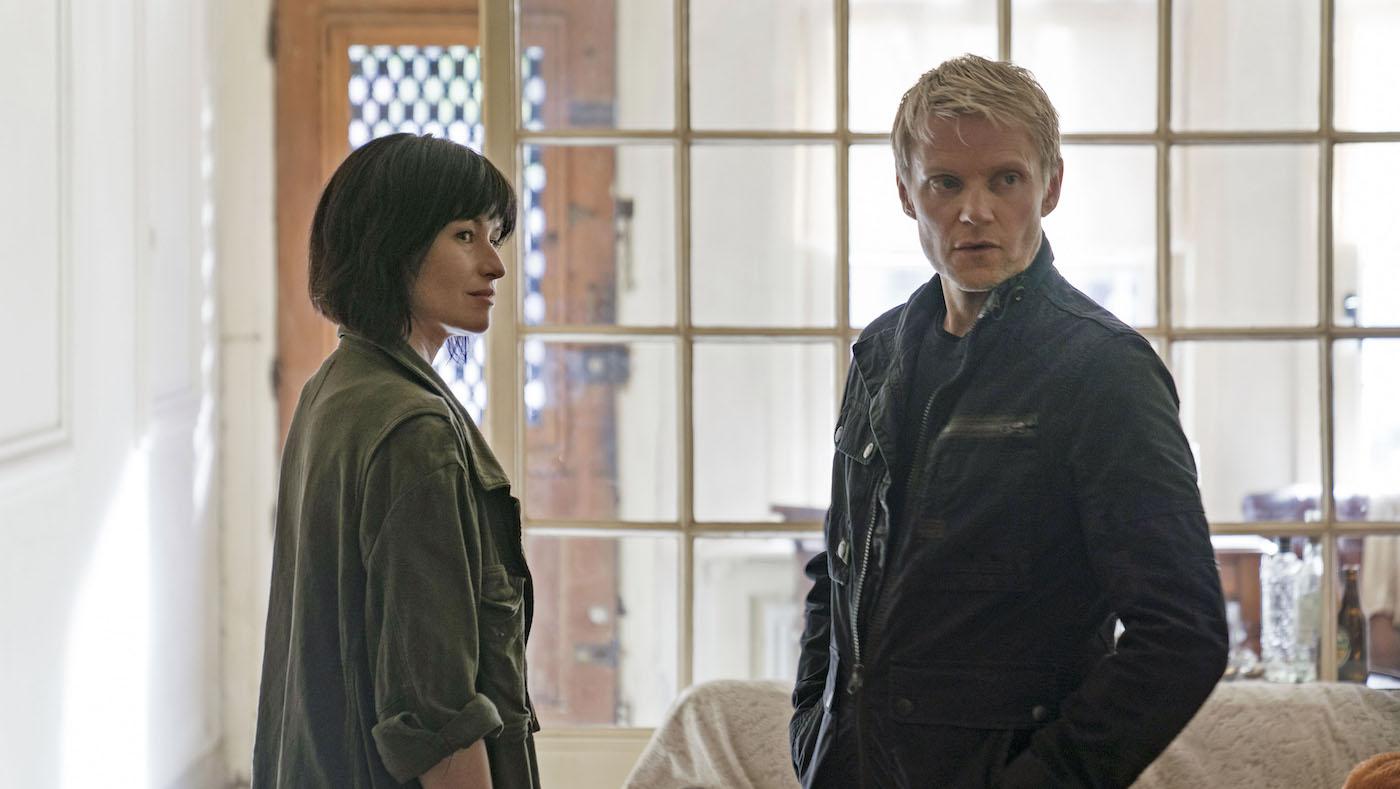 Van der Valk airs Sundays at 8:00 pm and is available to stream. Recap the following episode.

A man furiously pedals away from the police on a bike, losing them down an alley before being caught by another cop on a bike. After a brief scuffle, the fleeing man is handcuffed to a bridge by the cop. Piet Van der Valk has caught the suspect.

The man is a gang leader with strong anti-Muslim sentiments, and an election is approaching in which a right-wing candidate, Ed de Klerk, is running. De Klerk and his new campaign manager, Tim Brouwer, meet with Amsterdam’s chief commissioner of the police; they don’t want this high-profile arrest of an Islamophobe accidentally associated with their campaign.

Two men in dog masks leave a costume party. One walks into the path of a car, then opens the car door and knocks its driver out with a punch. The men throw the driver into a van, but not before a passerby sees them. They grab the passerby as well as another man who emerges from a house and begins calling the police, tossing them all in the back of the vehicle.

The next day, the first passerby is found dead in a canal. His father identifies him: he’s a university student named Milan; both parents are professors. Later that day, the other passerby, a man named Daniel, is found in an alley. Although there is a smashed bottle by his head, the amount of blood shows that he was killed somewhere else before being moved and the crime scene staged to look like he was killed in a fight—a fact that the eager Job Cloovers, who requested a transfer to learn from Van der Valk, deduces.

Van der Valk visits the coffee shop where Milan worked and asks about him, learning from Milan’s co-worker Eva that Milan had a boyfriend named Kalari, and that they were supposed to come to a party at her house the previous night but never showed up, even though Kalari called to say he was on his way. Van der Valk flirts with Eva throughout the conversation.

Meanwhile, Van der Valk’s partner Lucienne visits Daniel’s wife. Daniel’s wife hasn’t seen him, as he had a weekly tennis night, and she called but he didn’t answer. Neither of those things are true—Daniel no longer has a membership at the tennis club and his phone doesn’t have a call from Lucienne. It seems their marriage was on the rocks—a supposition confirmed when Job discovers that Daniel had dinner with the same young woman at the same restaurant every week. 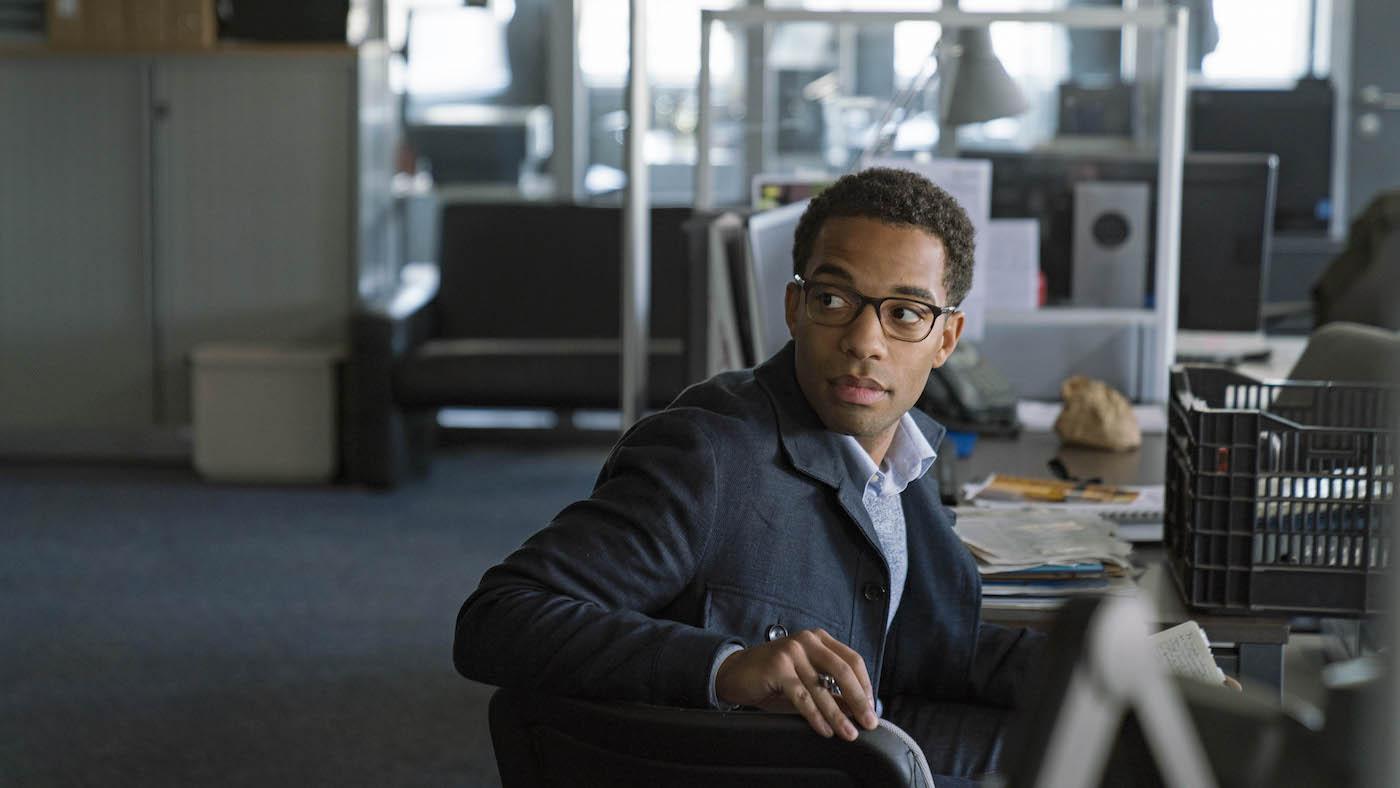 Autopsies show that both Milan and Daniel have each other’s blood on their clothes, as well as the same grease—so they were in the same vehicle together, and the murders are linked. Milan also has rubber under a fingernail: a fang from a mask. And they seem to have been professionally killed, suggesting a military person as the murderer.

The murders may have something to do with the election. Milan’s parents were supporters of the right-wing de Klerk, but Milan was a volunteer for de Klerk’s opponent, Paul Oosterhuis, as was Kalari—who is missing, as his mother, who works at the Rijksmuseum, confirms to Van der Valk.

Kalari’s car is found near Eva’s apartment. Van der Valk again speaks to Eva—and again flirts—and learns that she also works at an art gallery. Outside, his team speaks to a passerby—she’s the woman who met with Daniel every week. She lives on the same street, and is a law student who needs extra money for tuition.

Daniel seems to have just been in the wrong place at the wrong time when he was murdered.

Lucienne decides to visit the gallery where Eva worked, and learns that there were protesters there the previous evening. Brouwer, de Klerk’s campaign manager, is a guest of honor when Lucienne visits. He has a cut on his chin, but refuses to tell her why. When she leaves, she overhears a man mention Kalari on the phone; when she tries to approach him from behind, without seeing his face, he stabs her.

Luckily, Van der Valk was on his way to the gallery and finds Lucienne outside. She is saved at the hospital. She quickly checks herself out and comes to recover at Van der Valk’s.

Van der Valk has met with Oosterhuis, de Klerk’s political opponent. He suspects Oosterhuis is hiding a relationship with Kalari and Milan: Van der Valk only got through to the politician when he mentioned their names.

Kalari’s mother has received one of her son’s fingers in the mail—but she tells Van der Valk she doesn’t know anything about his disappearance.

Van der Valk’s team has narrowed down the list of military-trained killers who could have murdered Daniel and Milan. One of them, Bartel Peters, used to be the head of security for de Klerk, but he was dismissed after he hospitalized one of de Klerk’s political opponents, as de Klerk tells Van der Valk. Brouwer also explains his cut chin while Van der Valk is talking to the campaign: he was roughed up by the protesters outside the art gallery.

Wanting to spend more time with Eva, Van der Valk visits her and asks if she knows any of the military-trained killers. She says no, they flirt, and they sleep together.

Van der Valk deduces another romantic relationship: Kalari’s mother studied art in Antwerp a couple of decades ago, at the same time that Oosterhuis and his wife were there working for a publishing company that did close business with the art school. Kalari’s mother said his father has never been a part of her life; Van der Valk suspects she had an affair with Oosterhuis. Someone must have found out and kidnapped Kalari to blackmail Oosterhuis with his illegitimate son.

Perhaps Milan and Eva’s coworker at the coffee shop, Dave Smit? The police have been able to identify the van that drove away with Daniel and Milan from grainy video footage, and it’s registered to Dave. When Van der Valk approaches him, he tries running, but Job stops him. Dave says the van belongs to the gallery.

The police have nothing on Dave, so they release him—and trail him. He meets with Bartel Peters, but then the police lose him. As they rush to pick up his trail, they find him floating dead in a canal. The autopsy reveals that the knife that killed him is the same as the one that stabbed Lucienne. 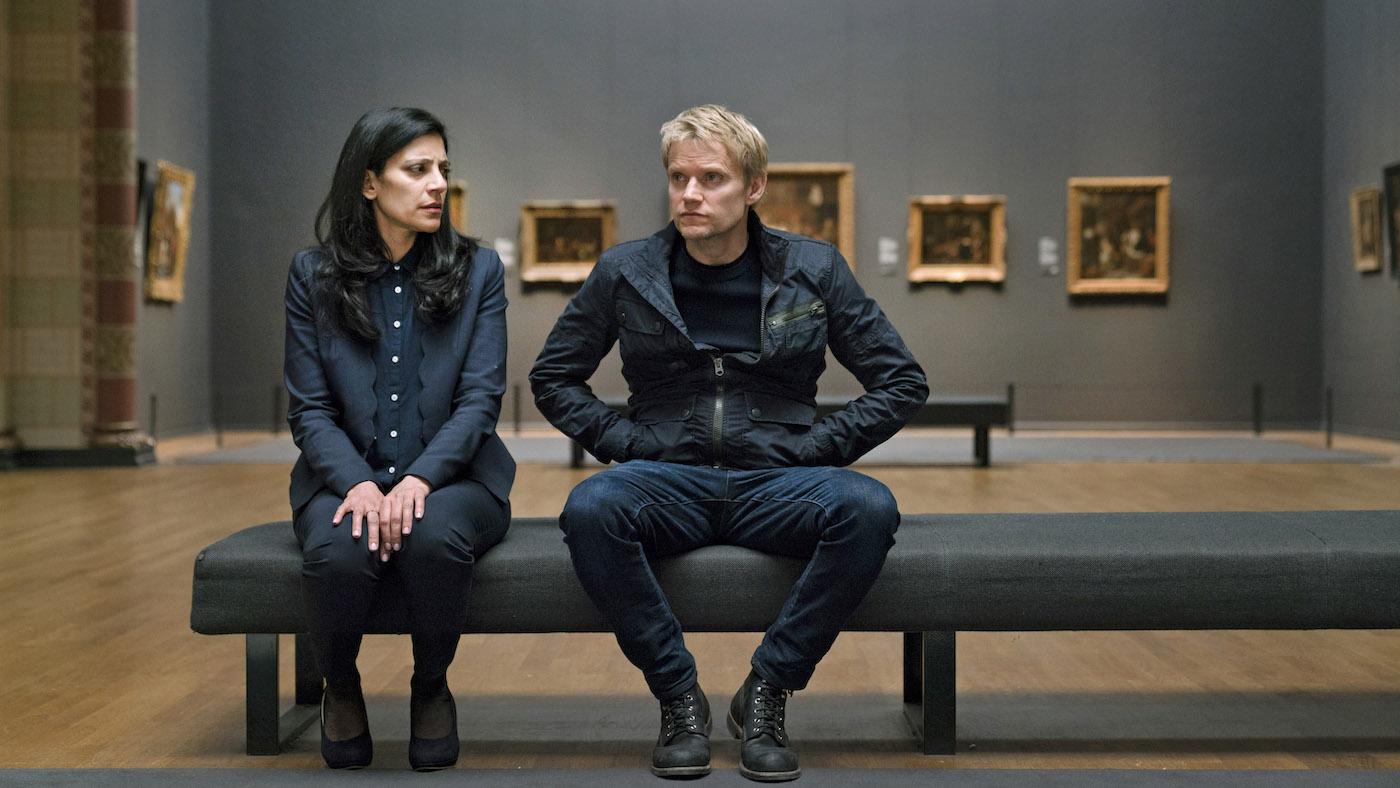 Van der Valk has convinced Kalari’s mother to admit her affair with Oosterhuis and reveal the kidnappers’ demands: they want Oosterhuis to drop out of the campaign. She also turns over Kalari’s finger. There are traces of Dave’s DNA on it; he and Peters must have been the kidnappers.

But Van der Valk is ordered to leave the case. Now that Oosterhuis knows the police know about his illegitimate son, the politician has ordered the Secret Service to take over the investigation. Van der Valk’s boss orders Job to arrest Van der Valk if he won’t give up the case.

But Van der Valk convinces Job to finish the case with him. They discover that the art gallery was recently sold, and is now owned by Brouwer’s girlfriend and specializes in right-wing art—hence the protesters. Going through photos of the event that Lucienne attended, they can’t find Bartel, even though he must have been there to stab her. Eventually, they realize he was the photographer. Visiting the gallery, they pick up his camera gear, which he left behind, and have a bloodhound sniff it for tracking.

Bringing the hound to an industrial area where the gallery has a warehouse, the dog leads them to Bartel. A standoff ensues—and Bartel ends it by shooting himself. Kalari is found, alive. Oosterhuis drops out of the race, his affair now revealed.

But Dave and Bartel were just the henchmen—who was the planner? Lucienne has found a photo that provides the answer: Eva with the Oosterhuis family. Eva was their nanny, and had an affair with Oosterhuis. When he dumped her, she was devastated and sought revenge. Van der Valk knows she was the mastermind, because Dave and Bartel were waiting outside her party for Kalari to arrive—but she’s the only person he called to say he was on his way. Furthermore, she dropped off Kalari’s finger for his mom.