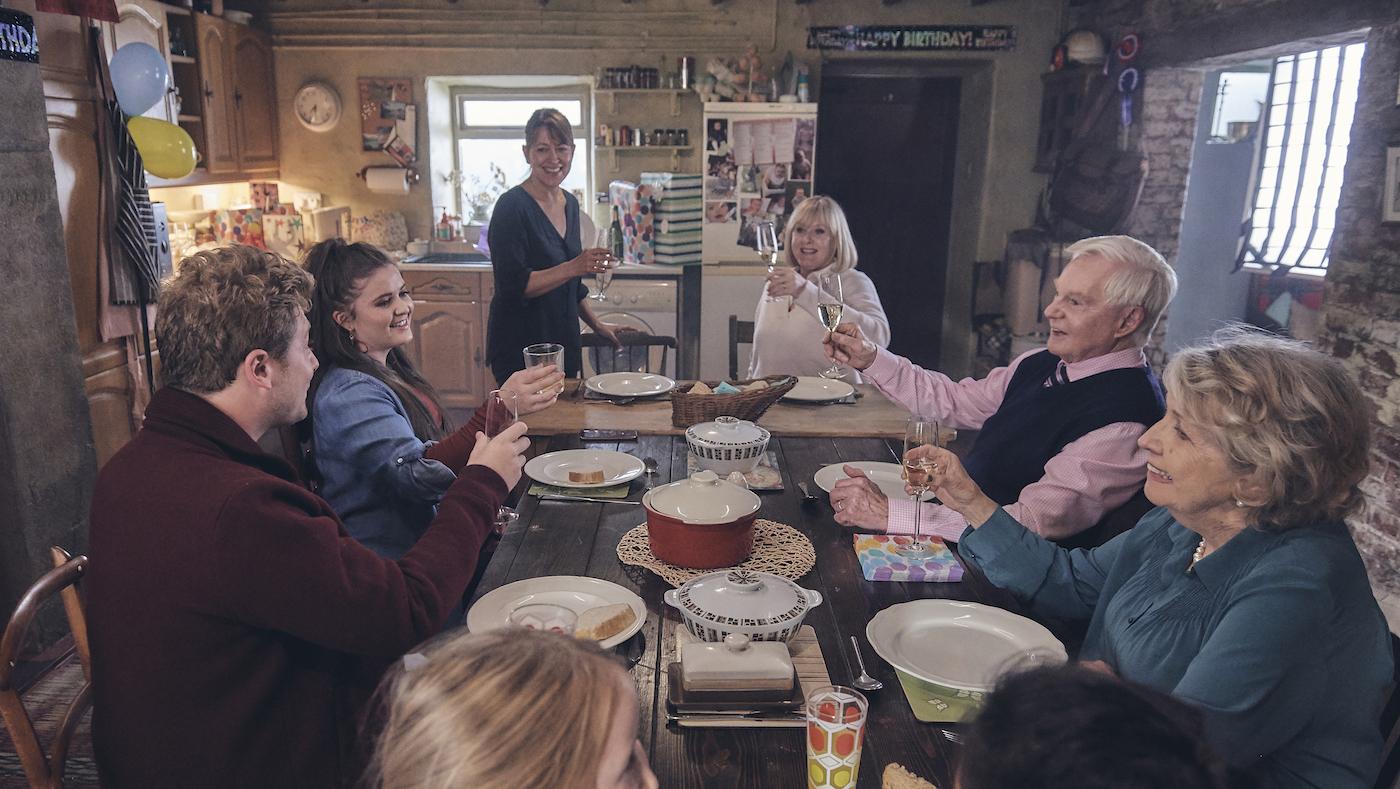 Caroline's and Gillian's joint birthday dinner is soured by a conversation about money. Photo: Stuart Wood

Last Tango in Halifax airs Sundays at 7:00 pm and is available to stream. Recap the previous season and the following episode.

Alan and Celia have been married seven years now, and are in the midst of improving the bungalow they recently bought. Celia wants a new, custom kitchen, and when Alan gets an unexpected call from his brother Ted that he’s coming to visit from New Zealand, she also insists on buying more furnishings for the guest bedroom.

While Celia focuses her attention on the house, Alan has decided to apply for a part-time job at the supermarket where his grandson’s wife Ellie works. Celia doesn’t understand why he wants a job—and, although she won’t admit it, is ashamed that he’d be working a menial one. But Alan is excited to interact with people, and happy to take the bus to work—Celia might need the Lexus.

Meanwhile, Gillian’s home has woodworm and needs to be fixed—at great cost—urgently, lest the roof collapse. She has recently taken out a loan to buy extra acres for her flock of sheep, so she asks Alan if he could lend her money. He wants to, but will have to discuss it with Celia, given the pending kitchen remodel.

Unlike the rest of her family, Caroline is blissfully free of problems—for now. In fact, she tells her ex-husband John over dinner, she’s the “happiest she’s ever been.” As he tries to find out if she’s seeing anyone, she ignores his questions and asks about their son, Lawrence, urging John to push him to do something with himself, since he doesn’t have a job and dropped out of college.

Lawrence’s idle life is enabled by the wild success of a series of Robin Hood books written by John’s girlfriend Judith. Judith is coming to the school where Celia is head teacher to speak as part of a series featuring powerful women—Michelle Obama was a guest. John warns Celia to have a contingency plan, however: Judith has had a few embarrassing bouts of drinking lately. Her publisher has assigned her a personal assistant to prevent any more incidents—but John finds the assistant’s constant presence in the house unnerving.

Alan is unsettled right before his interview at the supermarket. While he is walking through the parking lot, a boy sprints towards him with a security guard in pursuit. The unkempt boy is caught and forced to hand over the bread and few other goods he was hiding under his shirt.

He and the security guard wait outside the store manager’s office with Alan. The manager mistakes Alan for the boy’s guardian and calls them all in together. The manager knows Harrison, the boy, from previous incidents. 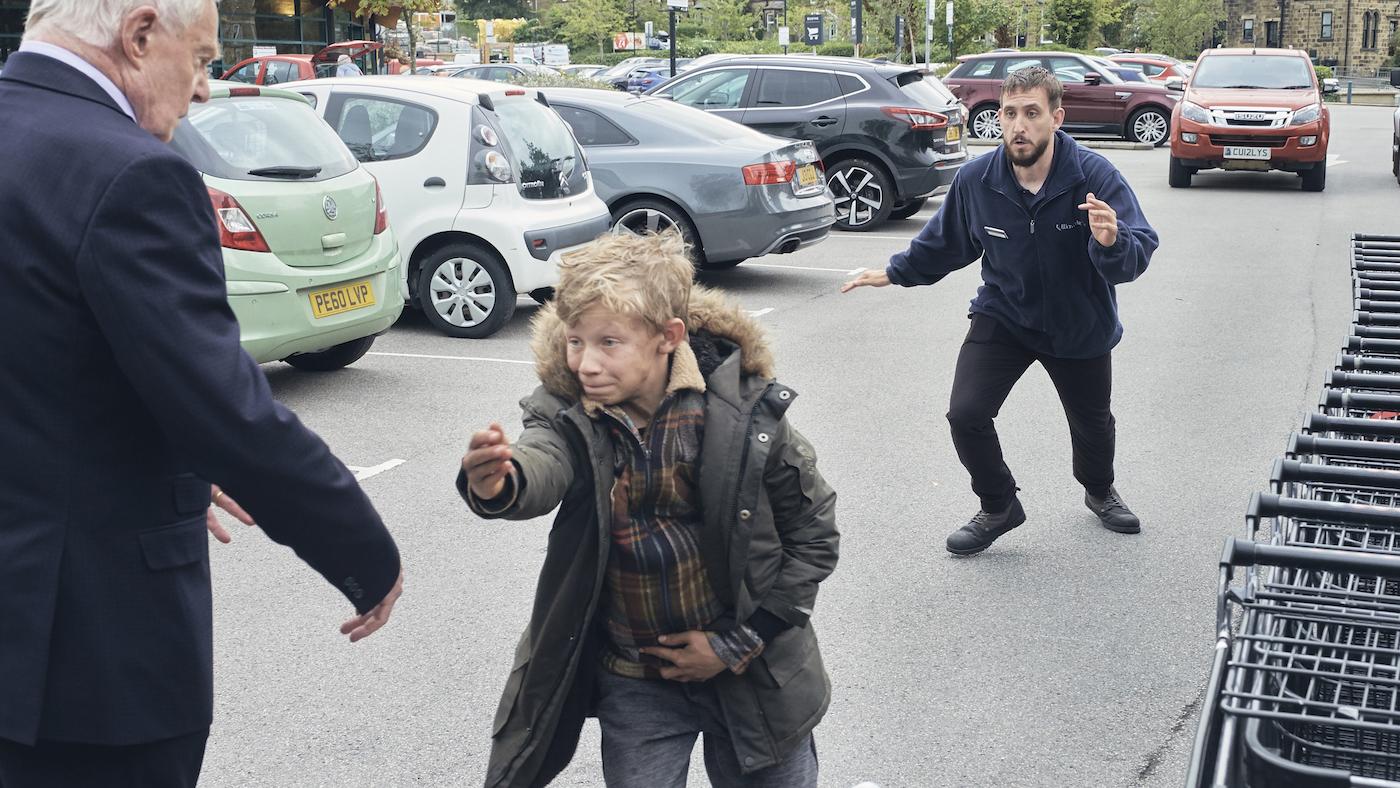 Alan takes an unexpected liking to a young boy caught stealing from the grocery store where Alan is interviewing for a job. Photo: Stuart Wood

After his interview, Alan pays for the stolen goods and drives Harrison home. He felt sad that what Harrison stole constituted a meal, he later tells his friend Harry; he doesn’t often encounter poverty up close. Harrison impresses Alan with his vocabulary, but dashes away when Alan drops him off at what he claimed was his home. Harrison reminds Alan of an impoverished boy from elementary school: once, the boy asked to come to Alan’s house to play and Alan said no; he’s regretted it ever since.

Hoping to avoid an experience she’ll regret, Caroline asks her colleague Ruth to handle the Q&A with Judith; that way, Caroline can step in if something goes wrong. It also doesn’t hurt that Caroline is interested in Ruth, whose husband has been sleeping in the spare bedroom, and that Ruth adores Judith’s books. Caroline invites Ruth to her house on the weekend to plan the Q&A.

It’s a big weekend: Caroline’s and Gillian’s joint birthday is Friday, and Ted is supposed to arrive Saturday. But Celia has received a worrisome call from Ted’s daughter Nadine. Ted has been showing signs of dementia, and recently had some argument with his kids over money—plus, he suddenly sold his home, for a hefty sum. And his children didn’t know about his solo flight to England: he paid his cleaning lady to plan it and take him to the airport, and now everyone is worried that he will get lost during his layovers in Hong Kong and Heathrow.

Ted’s whereabouts weigh on Alan at Caroline’s and Gillian’s birthday dinner. But when the woodworm is casually mentioned, he has another problem to distract him: he hasn’t discussed loaning money to Gillian with Celia yet. He’s forced to quickly explain, saying the kitchen will have to wait.

With that, the issue seems resolved, and conversation passes to the topic of the absent Lawrence. He’s coming to Gillian’s farm the next day to film something for his YouTube channel, “Lawrence and Angus Do Stuff.”  They “review” idiotic things, and seem to want to do something with Gillian’s sheep. It may not pay, but unlike Gillian’s son Raff’s teacher training, it’s easy—although Angus is starting to get fed up with Lawrence.

Suddenly, Celia cuts into the pleasant conversation. Gillian is once again manipulating her father, she says, taking away his hard-earned savings just as he and Celia try to enjoy a life of ease in their latter years. Gillian, hurt, says to forget the loan, she’ll find a way. Alan tries to defend her, but Gillian insists on dropping it.

Just then, Ted calls, interrupting the sour mood. He has made it to Hong Kong and seems fine, Alan says, relieved. The whole family will go pick him up from the airport tomorrow.

Woodworm aside, Gillian has other things to make her feel low: her ex-husband Robbie has sent her a birthday card.

Another ex-husband, John, is in for a surprise. As he and Judith sit at home one evening, she casually and uncertainly asks if he’d like to marry her.