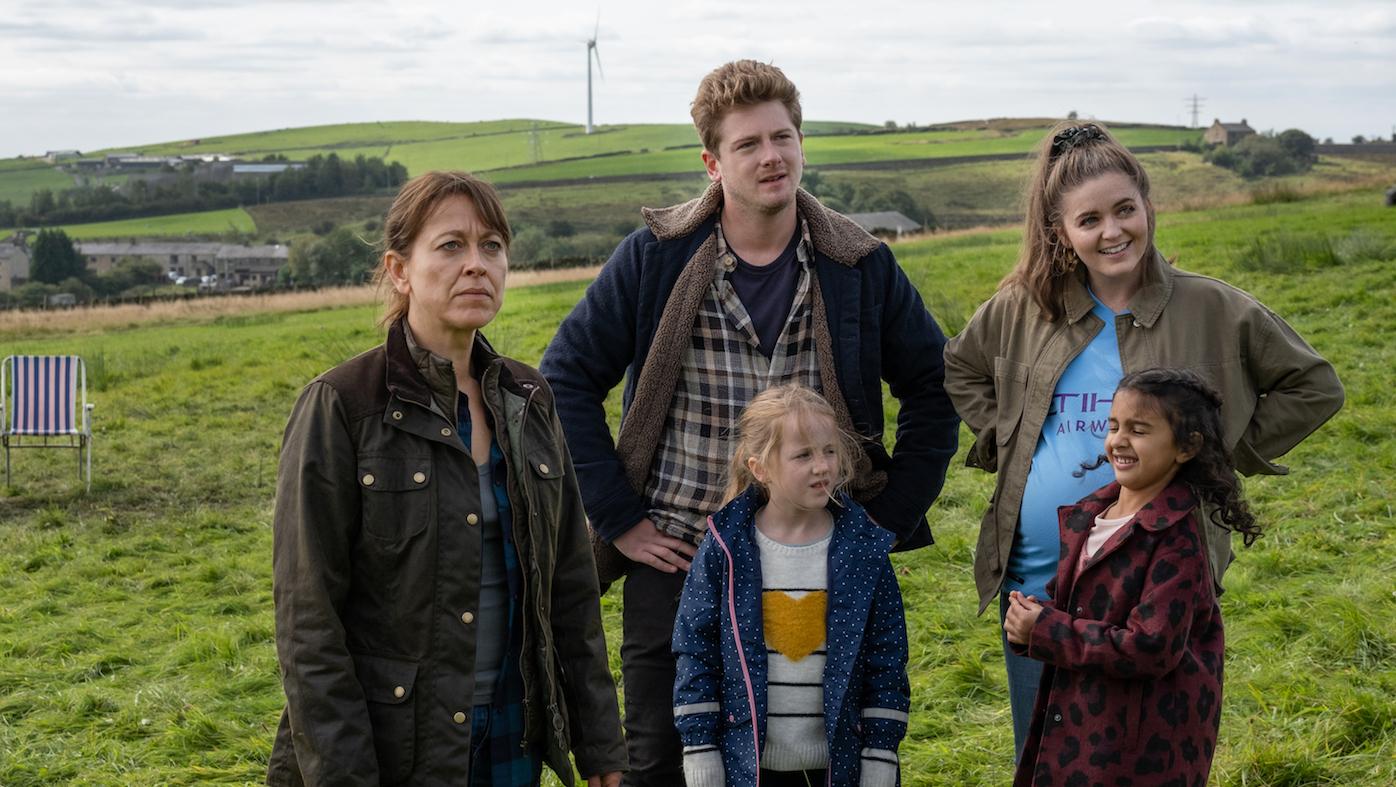 Something perplexing shows up on Gillian's farm, provoking a wide range of reactions. Photo: Matt Squire

Recap the previous and following episodes of Last Tango in Halifax.

Before they even get in the car to leave Gillian’s and Caroline’s birthday party, Celia is already apologizing to Alan for confronting him about offering to loan Gillian money. Alan in turn apologizes to Celia for not discussing it with her. Part of the reason for Celia’s quick apology is that she fears she’s losing Alan—perhaps he wants a job in order to get away from her. Their relationship has been a bit more difficult ever since they disagreed about Brexit. But Alan reassures her that he just wants to get out of the house and see some new faces.

While the money to address her home’s woodworm may not be coming from Alan, Gillian does get an offer of a loan from Caroline, but refuses it—Celia was right, she says; she should handle it herself.

She at least feels independent: although she has received a letter from Robbie, she doesn’t miss him and isn’t lonely. Caroline, on the other hand, is looking for a relationship, and has invited Ruth, a teacher from her school, over for dinner with the hope that it might lead somewhere. Even though Ruth is married to a man (who sleeps in the guest room), Gillian encourages Caroline to go for it.

Before Caroline’s dinner with Ruth, however, everyone must go pick up Alan’s brother Ted from the airport. Despite fears about his dementia, Ted arrives safely—with two young women in tow. They befriended him in Hong Kong, and now he has offered them a ride from the airport—which then morphs into a place to stay the night, too. Gillian and Caroline quickly decide that the young women will stay with Alan and Celia.

Since Ted suddenly declares that he wants a pint with Alan, and they drove separately, Celia is left alone with the women. She learns that they decided to stick by Ted in Hong Kong because they feared he would get lost on his own.

Ted doesn’t know this, of course. He’s simply happy to be back in Yorkshire. When Alan asks about his falling-out with his children, Ted says it’s because they wanted “hand-outs” after he sold his house. He quickly asks if Alan needs money—Alan has just got the job at the supermarket—but Alan laughs in response.

On the way home, Ted asks to stop at the supermarket to get champagne to celebrate his homecoming. He also reveals he’s not returning to New Zealand—he bought a one-way ticket. Alan learns more about Harrison, the boy caught shoplifting, at the supermarket from the security guard, who recognizes him. Harrison has lived in a series of foster homes, he tells Alan, and continually runs away to live on his own in sheds. 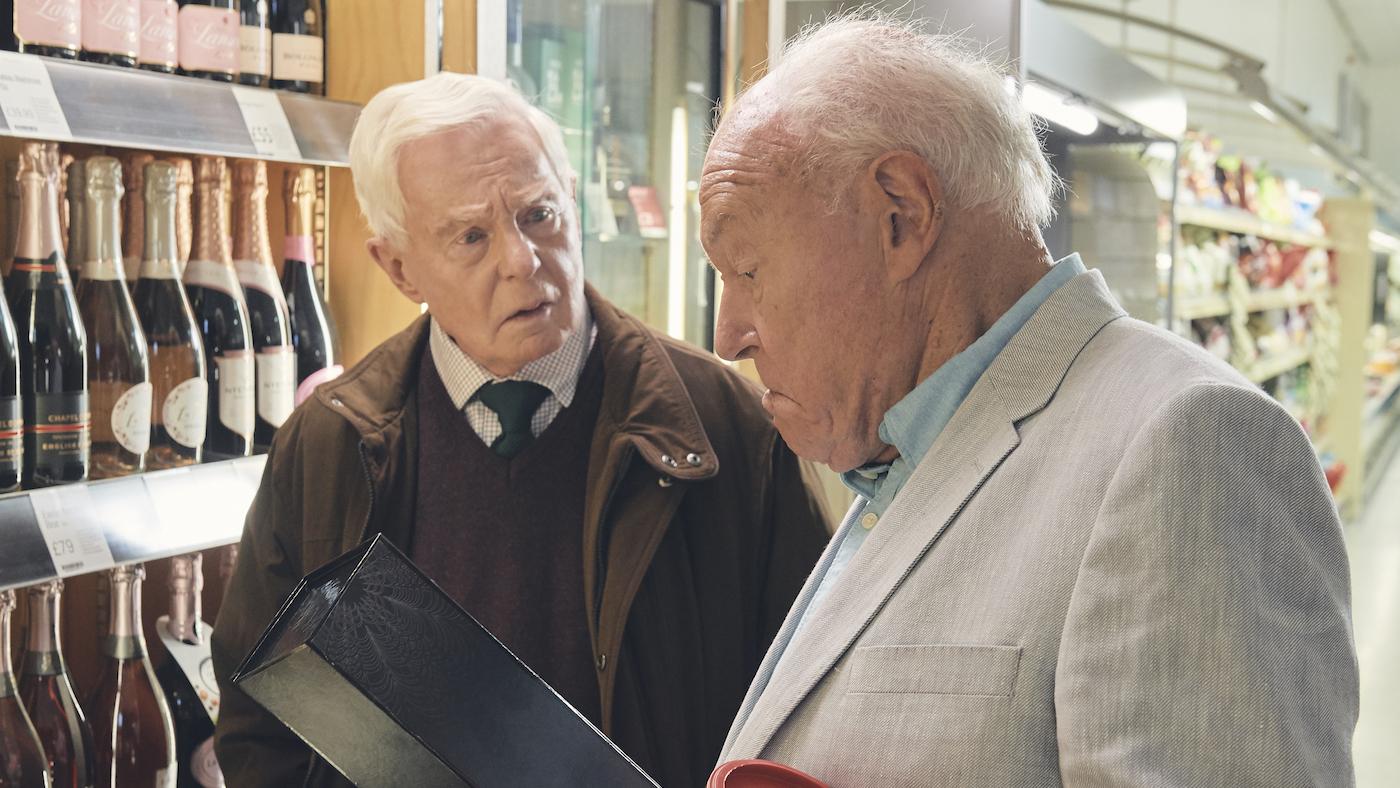 Ted misses his native Yorkshire, and has decided not to return to New Zealand. Photo: Stuart Wood

John might be having thoughts of running away, now that Judith has proposed that they get married. When John asks Lawrence if they should get married, Lawrence laughs. You hate each other, he says. He leaves John as he found him, sulking in the dark with a glass of wine.

John calls Caroline while she is en route to Gillian’s farm, and tells her that he knows marrying Judith is a bad idea—and he doesn’t want to—but he still said yes, given Judith’s fragile mental state of late. He then says he wishes he were still married to Caroline. But she’s so distracted that she doesn’t even hear: there’s a giant giraffe wearing 3D glasses and a shackle on its neck painted on the wall of Gillian’s barn.

Raff noticed it first, while sneaking cigarettes. Ellie thinks it’s a Banksy, and could be worth a lot. Gillian, however, is upset. The barn is where her husband Eddie died (was killed by Gillian to protect herself), and nothing good ever comes out of it.

Ted also has a late partner on his mind. He brought his wife Alice’s ashes with him to Yorkshire, and has plans to bury her with her parents. He, too, wants to be buried there—he wants to die in the land of his birth. As Alan tells Celia after Ted falls asleep on the couch, his mother made Ted move to New Zealand after he got Alice pregnant before they were married. He always felt banished, and has finally returned home.

Only Ted is sleeping at Celia and Alan’s home; the two women from New Zealand have decided to join Lawrence and Angus while they go camping at Gillian’s. Lawrence and Angus have already stopped by Caroline’s to pick up the tent, and met Ruth just as she was arriving for dinner. After they leave, Lawrence texts John, who is listening to Judith discuss wedding venues, that Caroline has a new woman—John had asked his son.

It certainly seems that Ruth is interested in Caroline. She has brought a bottle of wine, and asks to leave her car overnight and take a cab home, so that she can drink. Caroline offers to have her stay over.

Ruth will need it—she gulps down wine as Caroline shares humorous anecdotes about Judith and the rest of her family. It’s so nice not being at home with him, Ruth tells Caroline about her estranged husband.

She then asks about Flora. As Caroline explains her marriage to Kate, Ruth seems shocked; she didn’t realize Caroline was gay. The mood instantly darkens. Ruth says she’s not feeling well; she’ll take a cab home now. She believes Caroline invited her because Caroline was romantically interested in her—a truth Caroline quickly denies.

The next morning, Gillian wakes the happy campers in her field with a shotgun blast. There are foxes about, she says, as Lawrence, Angus, and the New Zealanders poke their sleepy heads out of the tent into the pouring rain.

When Alan wakes, he can’t find Ted on the couch where he fell asleep or in the guest room. The screen doors are open though. Ted could be anywhere in the rainy, hilly countryside.