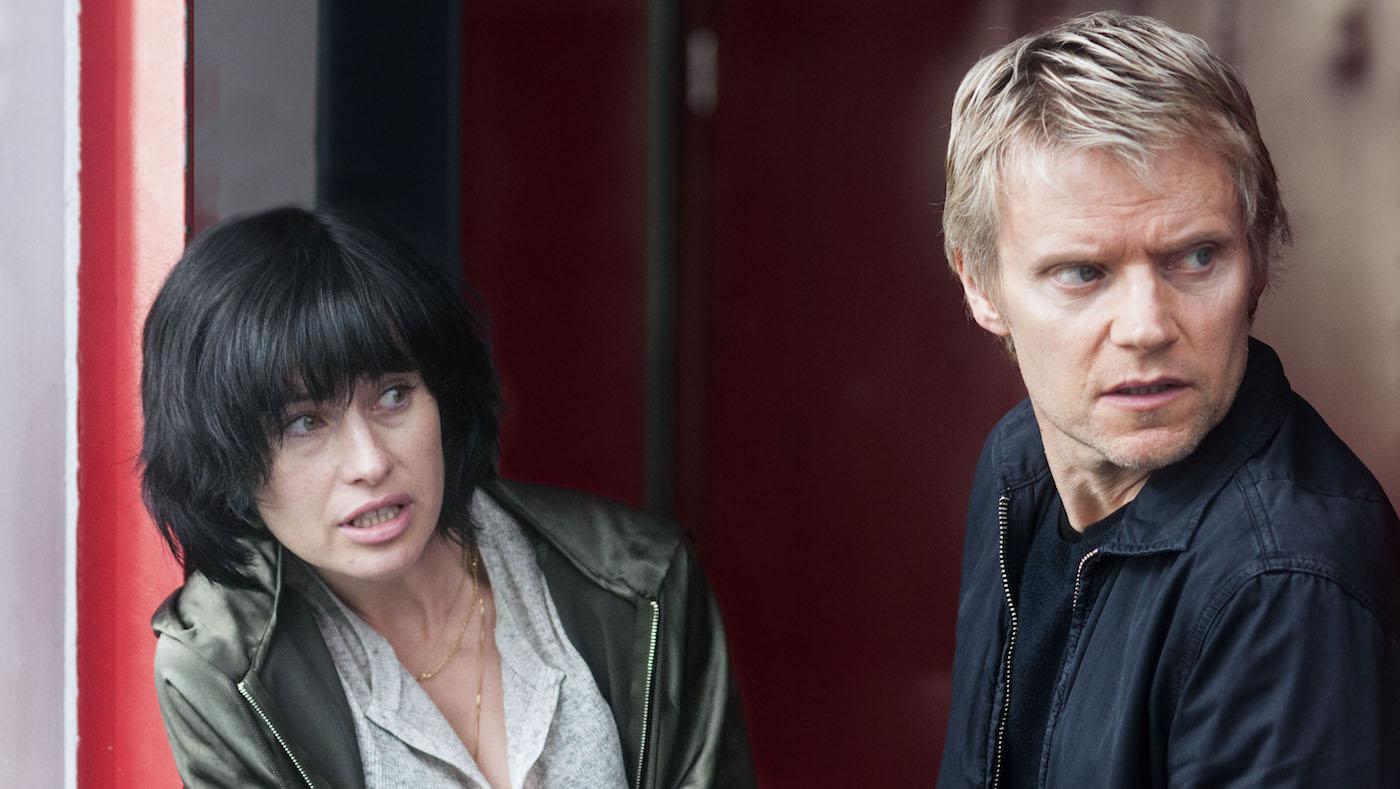 Van der Valk is available to stream. Recap the previous and following episodes.

The ethical fashion vlogger Ed Loman has a big announcement, to be made via his next video: he has been murdered. The video goes live on Ed slumped in a chair with tape over his mouth, his eyes stitched shut with vivid green thread. There’s no sign of a forced entry, although there seems to have been a struggle; Ed was stabbed in the heart with a kitchen knife. Both on Ed’s balcony and outside his building, there’s graffiti decrying the fashion world, signed Omega 616.

A scrap of orange fabric caught on the balcony provides a clue. A distressed woman outside Ed’s apartment might also be helpful. When Brad and Job speak to her, they learn that her name is Mila and she works for an ethical fashion house called Danhei—and she was informing Ed about possible violations at Danhei, including not paying their workers the past month. Perhaps Ed’s announcement was supposed to be about Danhei.

Or maybe it had to do with rival vlogger Lotta Nagel. She tells Brad and Job that, despite public appearances, she and Ed were friends. She mentions another rumor about Danhei: a larger, ethical label called Youniversality is trying to poach Danhei’s designer, Dani Nioh.

Danhei seems benign, however: they give their workers the day off to mourn Ed’s death. Dani has an alibi—he posted a photo from a coffee shop, and a waitress confirmed he was there—and his business partner Heidi Berlin says she was at the bank. Plus, they employ Syrian refugees to repurpose life jackets into clothes for other refugees. But the life jacket fabric might match that found on Ed’s balcony.

Testing reveals it doesn’t: it’s from a parka, which is what the elusive graffitist Omega 616 wears, although no one knows who they are. The thread used on Ed’s eyelids is an unusual substance: a mushroom-based thread that must be new, as no one is currently using it.

Perhaps it’s from Youniversality? No, but Ed was receiving monthly payments from the brand—until this month, when they suddenly stopped. When questioned about the payments, the label’s proud designer Gustav Schneider admits that he was preventing Ed from being a “nuisance” for the brand. His business partner Claudia Cabrera is surprised to hear of the payments.

While Youniversality apparently has extra cash lying around, Danhei certainly doesn’t. Heidi wasn’t at the bank, as she claimed: Danhei is on the brink of bankruptcy. She refuses to say where she really was, other than that she was meeting a friend protected by confidentiality.

She’s not the only one hiding things. Job discovers from Ed’s computer that Mila dated him until recently. From her, Ed moved on to a relationship with Youniversality’s Gustav Schneider.

Then another person appears with their mouth taped and eyes stitched shut: the police chief Dahlman’s driver. He’s alive, barely, in the hospital, after a beating suffered in a garage. But the thread isn’t mushroom-based; it must be a copycat attacker.

With all of these material analyses, Hendrik the coroner is proving quite useful. Van der Valk asks him to examine a new piece of Omega 616 graffiti that has appeared, smearing vloggers. He discovers that the paint is actually a spray-on fabric, and that the writing is slanted in a way that suggests the author is used to writing right to left, as in Arabic.

Despite the advances in the case, Van der Valk seems distracted. After he disappears without explanation, a concerned Lucienne asks him directly upon his resurfacing: why didn’t you tell me about the Theunis Visser court hearing?

Visser is in jail, and there was a hearing on whether to release him. Dahlman and Van der Valk attended. Dahlman visited the judge the day before; Van der Valk chastises her for this. Outside the courthouse, he runs into the law student who was sleeping with a murder victim killed by Bartel Peters for some extra cash. Van der Valk ends up spending the night, and later other dates, with her.

Visiting Danhei again, Van der Valk notices a can of spray-on fabric at one of the workstations. Dani says the workstation belongs to Chacko, a Syrian in charge of the refugee work program. He also mentions that most of the employees are at a Youniversality launch.

At the launch, Van der Valk and Lucienne spot Chacko. He sees them watching and tries to flee, but is caught—just as Youniversality’s Claudia Cabrera collapses onto the runway, dead.

Chacko admits that he is Omega 616; as a refugee himself, he hates the fashion world and its materialism, as contrasted to the plight of refugees. But he had nothing to do with the deaths.

Cabrera was poisoned: she took a number of designer drugs, and her latest batch was laced with cyanide. She also had a burner phone, which she was using to communicate with Heidi Berlin. It turns out that Heidi was being poached by Youniversality. She and Cabrera met several times at a posh café to discuss terms, which included a hefty advance with which Heidi could pay Danhei’s staff as the label struggled with bankruptcy.

One of Heidi’s ideas for Youniversality was a mushroom-based fiber. Cabrera had panicked after Ed’s death, since she recognized the stitching on his eyelids as the fiber, but the deal was still on. Heidi would have replaced Schneider and led the brand in a more ethical direction.

Schneider knew about all of this: he had tried to poach Dani from Danhei as a counter-move, but Dani turned the offer down. Ed had heard the rumor of Dani’s poaching from Schneider himself, via Mila: Schneider fed her information to give to Ed, who Schneider says was only sleeping with Mila for access to such gossip. Schneider recently told Mila that harsh truth—and now, Brad and Job find her collapsed in her home, trying to kill herself with drugs. Both her and Cabrera’s pills are marked “TA,” and Mila is muttering about “Total Angel” as she is brought to an ambulance.

Job realizes that “Total Angel” is an anagram of “Lotta Nagel,” and, when confronted, Lotta admits she is a dealer. But she insists she didn’t kill Cabrera.

Meanwhile, Van der Valk has gone to visit Theunis Visser’s son. I know you’re responsible for Dahlman’s driver, he tells the young criminal. Visser is upset that Dahlman visited the judge to apply pressure before the hearing. Leaving the encounter, Van der Valk orders protection for Dahlman without her knowledge.

Visser the elder was a corrupt cop—and Van der Valk’s mentor—who was taken down by Van der Valk and Dahlman; when he realized he was caught, he drove into Van der Valk’s car, causing the injuries that still pain Dahlman today.

When Dahlman notices the protection Van der Valk ordered, she calls it off, and visits Visser the younger himself. He has now redirected his anger at Van der Valk, believing he is responsible for keeping his father in jail. Dahlman leaves and orders protection for Van der Valk.

She returns home to find a floor-mat emblazoned with “RIP” on her doorstep. Noticing a car outside her door, she approaches it with a gun—and finds Hendrik the coroner. Van der Valk asked him to watch her. Worried about Van der Valk—he noticed the protection Dahlman ordered and snuck away from them—she and Hendrik set off to find him.

They make their way to a restaurant on the water, where Brad and Job have followed Dani and Heidi. They have learned that Dani fabricated his alibi for Ed’s murder: the waitress who said she saw him wasn’t working then. He bribed her and posted an old photo on social media to concoct an alibi.

Van der Valk and Lucienne are also on their way to the restaurant. They have discovered samples of Heidi’s mushroom thread hidden in the ceiling of her office—right where they once saw Dani climbing down a ladder. Dani knew Heidi was planning to leave him. Ed must have learned about the poaching and threatened Dani that he would reveal it; Dani killed him, using the mushroom thread to warn Cabrera off from Heidi. When that didn’t work, he poisoned Cabrera, trying to keep Heidi at Danhei.

Now, at the restaurant, Dani is trying to convince Heidi to stay with him. But as Van der Valk and Lucienne arrive, as well as Dahlman and Hendrik, so do Visser the younger and his thugs. As a tense shoot-out ensues, Dani rushes out of the restaurant, trying to avoid arrest, and is shot and killed by Visser’s men.

Van der Valk’s entire team behaves heroically, and Job, of all people, kills Visser before the criminal can shoot Van der Valk. Both cases are wrapped, both culprits dead. But the Visser case lives on for Van der Valk. He and Dahlman weren’t the only ones in the car when Visser crashed into them. There was another woman—the love of Van der Valk’s life. He’ll never get over her.