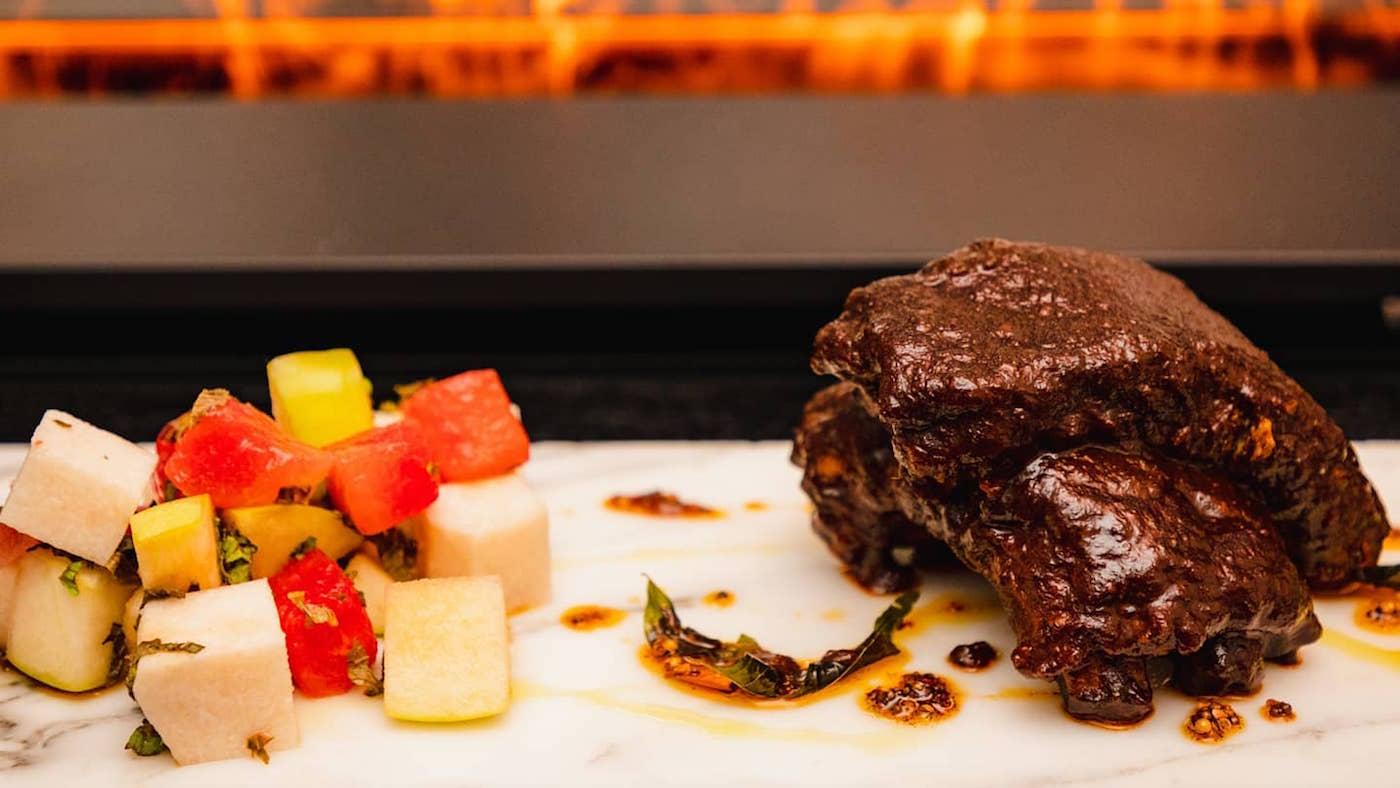 “The writing is on the wall: without a vaccine, with a potential surge in infections, and a justifiably cautious dining clientele, it’s very bleak,” says Rohini Dey about the outlook for the restaurant industry over the coming cold-weather months. Dey is the owner of the Indian-Latin American Vermilion Restaurant and has a background in economics and business, so she knows what she’s talking about, as she demonstrated in a May CNN op-ed about the dire prospects for restaurants during the COVID-19 pandemic.

But Dey is not someone to give up, nor are the fifteen other women restaurateurs she has partnered with to present “FLAVOR – October Tastings,” a series of four tasting menus available for pickup or delivery over the first four weekends of October. Each menu is a collaboration between four women restaurateurs featuring a course from each, allowing diners to sample four different restaurants and cuisines at once. (Orders must be placed by 4:00 pm on Thursday.)

“We all picked dishes reminiscent of our style, to give a taste of who we are as chefs,” says Sarah Stegner of Northbrook’s Prairie Grass Café. Her lamb sausage or grilled heirloom squash—locally sourced, as Prairie Grass’s food is, to help support local farms—appears on a menu with papaya salad from Pilsen’s HaiSous Vietnamese Kitchen, chili tamarind ribs or vegetarian gobi Portuguese from Vermilion, and milk chocolate Moe’eux caramel dessert from Carrie Nahabedian’s Brindille.

“This is a new model that lets people experience the richness that these different restaurants have to offer,” says Dey. “Who has ever done a tasting like this?”

FLAVOR is coordinated by Let’s Talk, a group of women restaurateurs put together during the pandemic by Dey, who co-founded the James Beard Foundation’s Women’s Leadership and Women’s Entrepreneurial Leadership programs. Founded with seventeen members, Let’s Talk Chicago now includes 25 women, while ten other cities have now formed their own groups.

“The intent of Let’s Talk is to create forums that give female operators/chef-owners the opportunity to support each other, take collective action, and to try to survive this crisis together,” says Clodagh Lawless, the proprietor of the Loop’s The Dearborn—featured in a French-focused FLAVOR menu alongside new Filipino restaurant and bakery Kasama, the Gold Coast’s Bistronomic, and the Logan Square-based Pretty Cool Ice Cream. “This group of strong and dynamic women is very important to us all…Let’s Talk encourages us all to try to adapt to survive the most brutal time the hospitality industry has ever seen.”

Initially, Let’s Talk was a place for owners to share advice about everything from personal protective equipment to where to get testing for their team, as well as to vent and offer moral support. But it has since evolved to include collective initiatives such as the FLAVOR meals and a Women’s Restaurant Week in August.

“The idea is to get people to come back and order, and expand our networks, because the networks that we have alone may or may not sustain us,” says Beverly Kim of Parachute, which recently reopened as the takeout and delivery Little Parachute, which operates out of Kim’s other restaurant, Wherewithall. “I think it shows our solidarity in supporting women-led restaurants by cross-marketing for each other.”

Tigist Reda, whose Demera Ethiopian Restaurant is featured on a FLAVOR menu alongside Parachute, Saigon Sisters, and Frontera (with an optional drink from Kumiko), has found the marketing aspect of Let’s Talk to be revelatory. “I learned to market more,” she says. “They’re all very good at marketing.”

Reda anticipated the FLAVOR meals by partnering early on with her friend Mary Aregoni of Saigon Sisters to offer special meals of each other’s food for pickup or delivery through their restaurants. At the beginning of the pandemic, they called each other almost daily to offer advice and support, before finding the larger Let’s Talk group. “It’s helpful to have the camaraderie,” Reda says, “and exciting to have different cuisines from different areas of the world in one package. It’s great to collaborate with so many phenomenal women.”

Let’s Talk’s collaborative initiatives have also drawn on its members’ disparate talents, from Dey’s business background to Danielle Dang of HaiSous’s graphic design work. “People have handled [the reservation and delivery platform] Tock and the accounting,” says Stegner. “I’m impressed by what we’ve pulled together, and it’s also really nice to see what other chefs are doing.”

Beyond the diverse cuisines represented in the group, there’s also a wide range of establishments, from James Beard Award-winning or Michelin-starred restaurants to an ice cream salon to bakeries like Vanille and Sugar Bliss (on a FLAVOR menu with Chocolat Uzma and cocktail bar The Dandy Crown). There’s modern Korean, Vietnamese, Mexican, French; restaurateurs just starting out and others who have been in the business for decades. Such a spread not only may help different customer bases find new places to try via the FLAVOR menus, but also disparate opinions and advice for the restaurateurs.

“We are diverse in our ideas,” says Kim. “But [Let’s Talk] is supposed to be a safe place to share our different perspectives over a variety of different subject matters related to surviving this pandemic.”

Dey hopes that Let’s Talk can continue collaborating, pooling their strength, offering advice, and banding together politically (as in their support of the Restaurants Act) after the pandemic—especially as a women-led group in a male-dominated industry. “It’s not purely a pandemic Band-Aid. We can put a bad crisis to good use,” she says.

But for now that crisis is foremost, especially as winter approaches. “I am very fearful for our survival,” says Lawless. “According to the Illinois Restaurant Association, 60% of restaurants will shutter due to the pandemic, and I will fight tooth and nail not to be one of them. However, the success of our business right now is completely out of our control…It is crucial that the government gets together to agree on another Paycheck Protection Program.”

“The restaurant industry will have to rebuild after this pandemic in a way that is more sustainable,” says Kim. For now, the Let’s Talk restaurateurs are just doing all they can to survive.