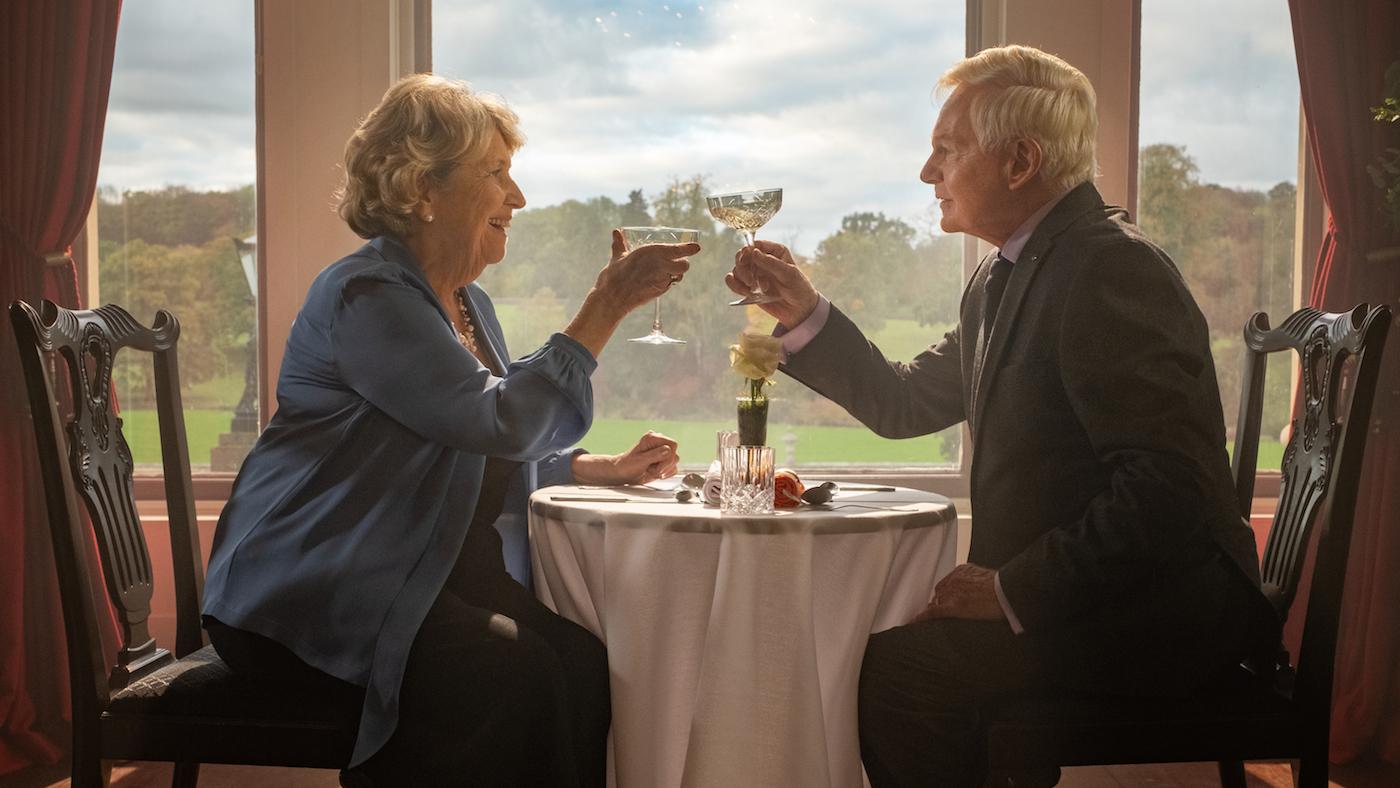 Celia and Alan work through their issues as they reach their seventh anniversary. Photo: Matt Squire

Recap the previous episode of Last Tango in Halifax.

Celia and Alan may be out of the money they invested in a new kitchen, but at least they won’t be out of a functioning kitchen. Rick, one of the workers who informed Celia and Alan that their contractor had disappeared with their money, is replacing their old kitchen, free of charge—but we’ll give him something, a grateful Celia says.

Gillian will help him with the work—it helps that he’s handsome—but for now Rick is left alone with Ted, who has finally convinced Celia and Alan to leave him alone for once. He promises not to wander off again.

While Ted has his breakfast, Harrison wanders in, saying he’s a friend of Alan. Are you the one living in our shed? Ted asks. He is—but Harrison denies it, spinning tall tales while he eagerly eats the food offered by Ted.

The odd pair strike up a conversation, and Ted tells Harrison about his whole situation, then mentions that he wants to go to Bridlington, where he went on his honeymoon with his late wife all those years ago. Harrison offers to drive Ted, shrugging off his youth—they’ll just have to take a bus to the train station, where Harrison left his car. Ted goes along with it.

Alan is upset about Ted’s mistakes and expectation that Alan will pick up the pieces, but Celia feels bad for him. But then Alan has another family member whose mistake he can lament. Raff calls him to admit that his friend is responsible for the giraffe graffiti on Gillian’s barn. He had joked with his friend, who can imitate Banksy’s work, that a Banksy could help his mom pay for treating the woodworm—and then the friend painted one. Raff feels so bad for upsetting his mom that he wants to offer his and Ellie’s savings to her, but Alan adamantly orders him not to.

Caroline also has to strongly refuse someone. Judith keeps calling her to schedule a dinner date, but Caroline is not interested. “Starting a relationship with an alcoholic is not on the top of my list to do,” she tells Judith.

Especially not while her ex-husband John is staying with her, having been kicked out of Judith’s home. He has been helpful in picking up Flora and Calamity from school, but Caroline doesn’t want him there. She pitches an idea to Gillian: what if they lived together and helped each other out? But Gillian says it could never work, and Caroline admits she’s right.

John does prove himself useful when Celia returns home to find Ted missing, his cell phone left in the house. John and Lawrence help her begin searching for Ted, while Harry goes to the grocery store to tell Alan. When the police arrive to help, they reveal to Celia and Alan that someone has been living in their shed—news to them.

Harrison has carjacked a vehicle from the train station, pretending it’s his, and Ted has navigated him to Bridlington. There, they enjoy rides and games before having lunch together. Ted tells Harrison that he wishes he could apologize to his late wife Alice for losing their house. As he and Harrison wade in the sea, he imagines he sees Alice in the water. “Come on in,” she says. “I love you,” he responds, and she vanishes.

Harrison decides he wants to visit his sister in another town—they were put in separate foster families—but Ted isn’t up for it. Go on without me, he tells Harrison, who angrily stomps off. 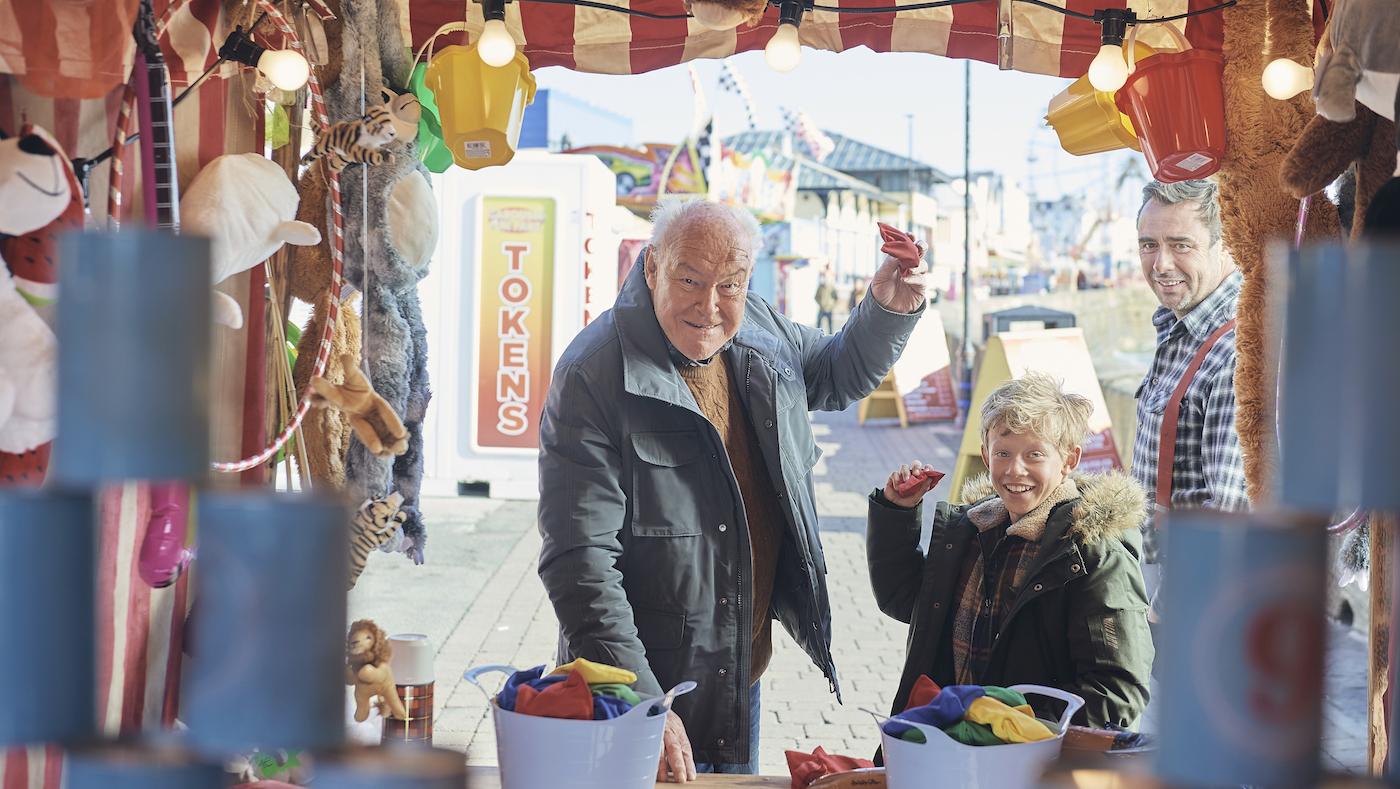 Ted and Harrison go on an adventure to a seaside town. Photo: Matt Squire

Back in Halifax, Celia and Alan decide to look for Ted at the church where he, Alan, their parents, and even Celia were married when they were young. Ted isn’t there, but Celia and Alan take the chance to rest and talk about their problems. They won’t get their money back that they paid for the kitchen, and won’t be able to afford to renovate any more.

There is some kitchen money that they hadn’t paid yet, so Celia suggests using it for a holiday. Alan asks if they might offer it to Gillian for her woodworm problem instead. After learning that Caroline offered Gillian money and Gillian refused, Celia agrees. They may have their disagreements, but Alan and Celia still love each other.

Caroline is working through her own issues. When Ruth arrives at work with “I am a mad bitch” painted on her car—probably by her husband—Caroline calls her in and apologizes for not being a better friend and truly listening to her talk about her marriage. Caroline has arranged for a new paint job as well as rides for Ruth while her car is in the shop, and also offers to have Gillian speak to her, as someone who has also been in an abusive marriage. Thank you, Ruth says—and means it.

While driving to see his sister, Harrison decides to turn back to be with Ted. Arriving at the beach where he left him, he sees an ambulance and a crowd of people. Ted has drowned.

By the time of the funeral, Ellie and Raff have had their baby. Harrison attends, and elicits some questions from guests. Alan and Celia explain that he might soon be able to live with his sister, who is about to turn 18—which seems to be what Harrison wants.

Gillian has decided not to sell the farm after all—and she finally convinces Caroline to go with her to the women’s disco, in the hopes of meeting someone. The two stepsisters have also decided to treat Celia and Alan to a holiday for their anniversary.

Despite the loss of Ted, Celia and Alan are happy once again. Rick has fixed some finicky things in the kitchen, and now they get a stay in a hotel courtesy of their daughters. They toast to Ted, and then to another seven years. (That was their problem, Celia says—the seven-year itch!) As a pianist plays, they dance together. Who cares who’s watching?