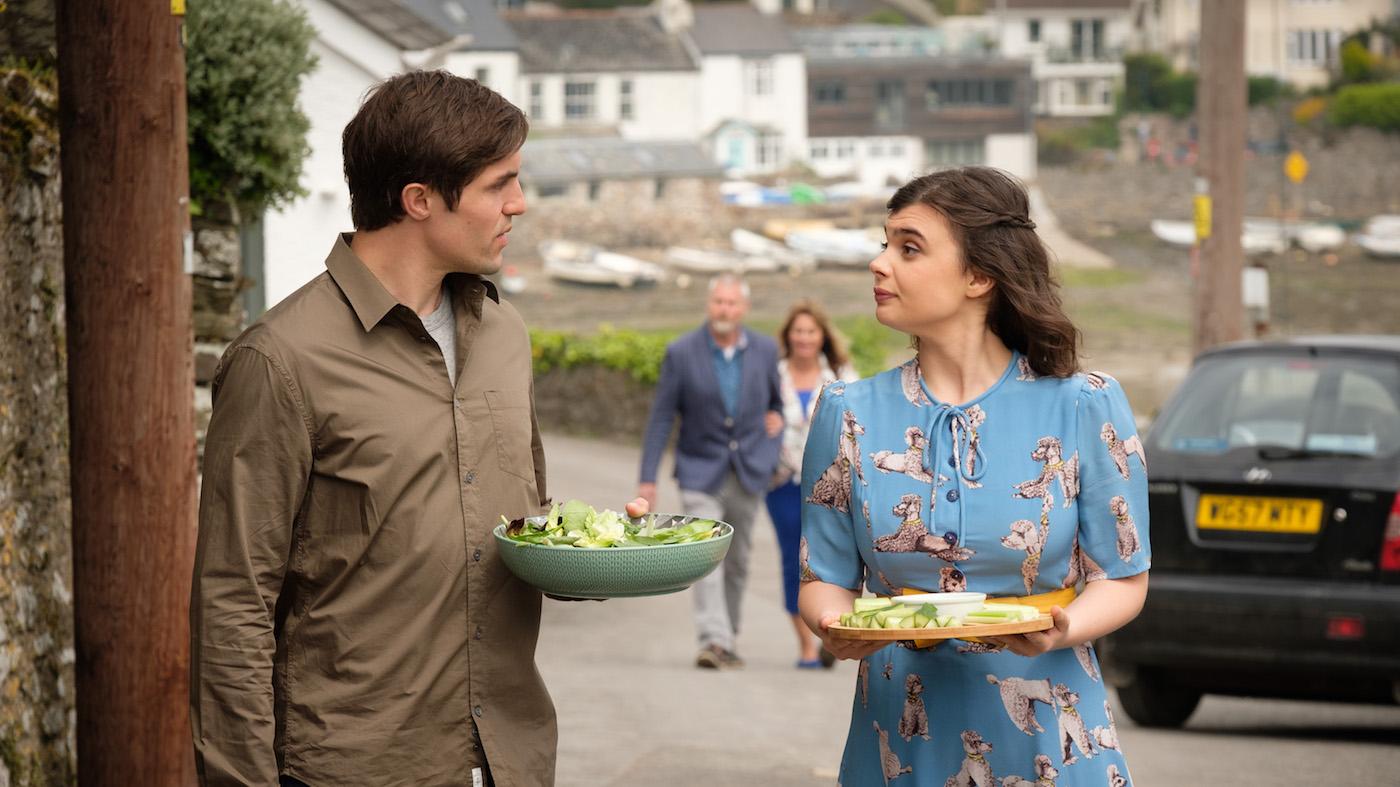 Jamie and Becka have some bad news for Maggie about her radio interview's popularity. Photo: Joss Barratt for Genial Productions Ltd./ITV Studios Ltd.

Maggie didn’t sleep at all following the airing of her disastrous radio interview, but she still insists on going to work. As she and Peter get in the car, she spots Carol leaving her house across the street and wonders if it’s too soon to speak to her. She nearly forces the issue by accidentally honking, drawing Carol’s attention. Maggie drives away, ducking.

Jamie and Becka visit Maggie at work: they have news they want to share in person. “#Radiogate,” as her interview is being called, has blown up on the internet, accompanied by a photo of her dressed as a witch for Halloween.

At Carol’s medical practice, Betty Jarvis—mother of a notorious child—also brings up the interview and its infamy, digging for dirt from Carol. As Carol returns home, Maggie rushes out of her house to apologize, but Carol doesn’t want to talk to Maggie and goes inside. Later, her husband Alan returns home and tells her he ended it. She hugs him.

Rubberneckers are gawking at the pub, where the bartender turns them away—but Brian, the owner, tells her to at least see if they want a pint next time. She suggests suing Maggie; he shrugs it off.

People are buying all of Marcus’s books from Emil’s store to see if they recognize themselves in them. Jill asks Emil how Roxie’s doing—not well—then buys one of the books herself.

Kelly and Neil have 70 grand, somehow, and had promised not to touch it for a year, but Neil had to go and buy a sports car—with a personalized plate, no less. They didn’t steal it, just took advantage of an opportunity—and decide to go with Maggie’s lottery story to take away suspicion. Neil even frames and hangs a fake winning lotto ticket.

The next day, the “outed six,” as the subjects of Maggie’s gossip are now known, are plastered over the front page of the newspaper. Maggie decides to call in sick, and go where sick people go: to the doctor.

Peter’s not immune from the drama: parents are commenting online that perhaps he shouldn’t be headmaster anymore. Karen, his assistant, defends him. He’s the real victim, she tells Jill—in addition to you and the other six, of course, she adds.

Jill is in the office to tell Peter that Roxie is going home—she’s not feeling well. Jill drives her home and consoles her. As Roxie gets out of the car, Jill notices Marcus walking his dog and gets out to introduce herself as a fellow victim of the gossip. She lightly flirts, and asks him to speak to her class about writing. After some hesitation, he says yes.

Roxie hasn’t been able to reach her boyfriend Alex since #Radiogate, although she doesn’t think he believes the allegations—and he doesn’t, as he agrees with his mom when she says none of it’s true. His stoner brother Liam joshes him for leaving a better job in the city to come back to Thurlbury, but his mother is thankful, though worried he did it for her. With her mom going into a home and what happened with her husband, Alex has been a great support.

At the doctor, Maggie claims she has trenchfoot so that she can get in to see Carol. After seeing everyone else, Carol lets Maggie in and gives her five minutes to make her case. Maggie was drunk, the interview was deceptively edited—but that doesn’t matter. She wants to help fix any issues she has caused between Carol and Alan.

Carol decides to tell Maggie the truth. Alan is having an affair of sorts, but Carol’s not the victim—she’s the other woman. She and Alan aren’t married, but he does have a wife, whom he frequently goes to see; the man he was seen with is his son. Carol and Alan pretend to be married to forestall questions. The sort-of bigamy suited Carol well, as she never wanted kids or a husband. And now Alan has left his wife, and Carol is committed in a way she never wanted.

Maggie, shocked, says she won’t tell anyone, and Carol replies, I know—and it will kill you. She then goes to see Alan’s wife and son. When Alan returns to her later, she tells him that she and his wife have agreed that his home should be with his wife and son. Carol’s life with him is done.

At school Peter runs into Jill. He tells her that not talking to her is breaking Maggie’s heart—could Jill just speak with her?

So Jill comes over to Maggie’s and asks for Maggie’s notebook of planning for Thurlbury’s anniversary. Maggie probably shouldn’t do it anymore, so Jill will take it over. Anyway, Maggie isn’t the local historian; she just runs a gift shop.

After Jill leaves, Maggie tells her whole family she won’t be a pariah—she may have shared the gossip, but she didn’t spread it across the radio, internet, and paper. They will all go to the pub and have a drink as in normal times—even if they never did that before.

As they enter the pub, a hush descends and everyone stares. Carol comes in and marches over to Maggie. Everything you said on the radio is true, she tells Maggie so that others can hear. Alan was living a lie and made Carol a part of it—now he has finally left. Maggie had no right to gossip, but she did reveal the truth, and that’s the end of it. Carol leaves and Maggie brightens—that’s one of the six fixed!

Liam, who’s helping out his girlfriend the bartender at the pub while Brian is away, is curious about the rumors surrounding Brian. He sneaks into Brian’s room upstairs and finds a case with a gun.