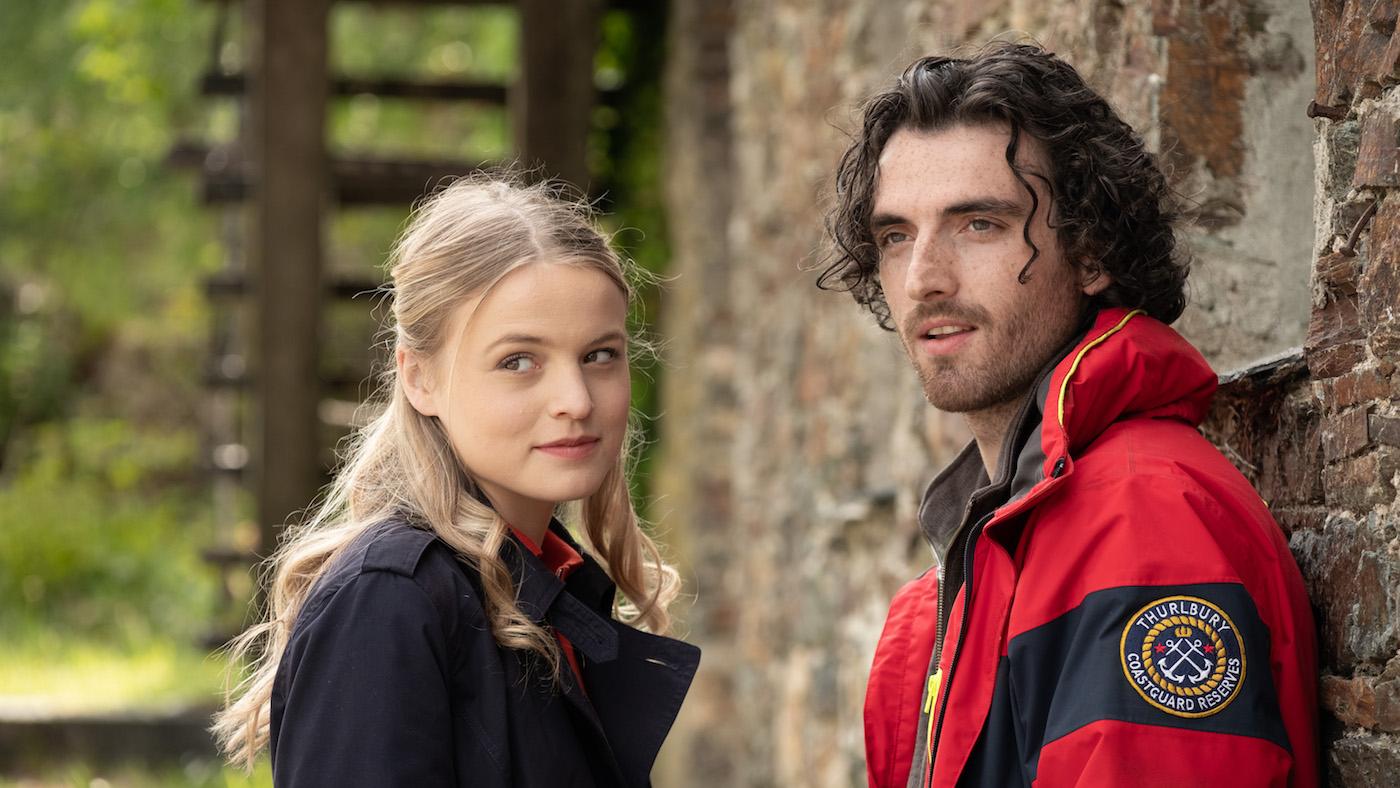 “Today deserves a soundtrack,” Maggie exclaims when Peter complains about her blasting “Karma Chameleon” in the morning. She’s eager to share the news that they will be grandparents, even though she has to go out of her way to get stamps, since she is still avoiding Emil’s shop because of her gossip about Roxie.

Running into Jamie and Becka outside Emil’s, she asks them to buy stamps for her. Becka tells Maggie that she has been doing a good job of apologizing to everyone; she should just go in and talk to Emil. But when Maggie tries to speak with Emil, her apology backfires. He insinuates that Maggie gossiped about Roxie because she’s the only Polish girl in town. Plus, he doesn’t have any stamps.

Meanwhile, a journalist has called for Peter at the school. Karen told them to never call there again, which Peter appreciates. But the reporter is dogged: they also call Marcus. They seem more interested in Maggie than him. Same thing with Jill.

Marcus has sent Jill flowers (to the annoyance of Karen), and asks Jill to dinner. Unfortunately, she has the Thurlbury anniversary planning meeting that evening—maybe he could come, for moral support, and they could have dinner after?

Maggie calls Peter to relate how upset she is that Emil thinks she’s racist. “I voted no for Brexit!” she says. Peter reassures her, then returns to brooding over his computer after they hang up. He’s scanning the Edinburgh Campus College Newsletter, from 2010.

Maggie’s not the only one who feels bad about the encounter at the shop. When Roxie comes home, Emil mentions that Maggie stopped by—and that he rues what he said. Roxie decides to go speak with Maggie at the keep.

Maggie is surprised by how friendly Roxie is towards her. She launches into her now-practiced apology and Roxie says that she’s heard everything Maggie said about her sleeping around before; she’s heard it for years, as a pretty young woman. Maggie’s interview didn’t actually change how people looked at her.

Do you believe the rumors? she asks Maggie. “I don’t know,” Maggie says—and Roxie appreciates the honesty. I’ve only had two boyfriends, she says, shocking Maggie—who quickly tries to hide her surprise. By the way, Maggie adds, none of this is because you’re Polish.

That leads Roxie to Emil. He has always felt like an outsider in Thurlbury, especially because everyone still treats him so gingerly, even after twelve years there. Everyone reassured him that they voted no for Brexit—but he voted yes! He just wants people to stop coddling him and engage with him as a real person.

With their differences talked out, Roxie reminisces about coming to the keep with Alex in the evening. Now he hasn’t spoken to her since #Radiogate. Maggie commiserates: she misses Jill and, like Roxie with Alex, eagerly hopes to hear from Jill everyday.

Alex’s brother Liam also finds it odd that Alex hasn’t spoken with Roxie—just like he says he hasn’t gambled for years. Not that Liam has connected them to his brother, but he has noticed Alex’s debtors at the pub—they stayed overnight, claiming they were developers—and found them suspicious.

Having realized his stash of money at the keep was gone, Alex has begged the debtors for more time to pay them back. They gave him 24 hours. When Liam and his mom go to visit Alex’s grandma, the debtors text Alex a video of the three of them. “Time is running out,” they write.

Alex runs into Neil down at the boatyard and they discuss Neil’s supposed lotto win, as well as how Neil and Kelly are going away for their anniversary this weekend; Roxie is watching their son Josh. Desperate, Alex decides to try Neil’s method of making money and buys lotto tickets. As he scratches them, he connects Neil’s comments and Alex’s discovery of a soccer ball just like Josh’s outside of where Alex hid his money, and realizes Neil must have found the stash.

Liam also wants money. With the help of his girlfriend Syd, he asks Brian, the pub owner, for a job. This may be motivated by his curiosity about Brian and his gun. Brian reluctantly gives him a dishwashing job on the weekends.

Maggie goes with Roxie to speak to Emil, criticizing his prices and shop. After Roxie gets a text from Alex and excuses herself, Emil lets Maggie buy stamps and smiles at her.

Alex later calls Roxie, apologizing: it’s been a hard week, with family stuff. She pushes back, but when he says he wants to see her, she relents. She’ll be babysitting Josh tomorrow, though—but Alex suggests that he could come over to Neil and Kelly’s house then.

After such a good day, Maggie decides to go to the anniversary planning meeting with her family. They won’t ask questions, they’ll just be there and show everyone that they are doing well. She even dresses up for the occasion.

As Jill nervously starts the meeting, everyone’s phones ding and murmuring overtakes Jill. Karen tries calling Peter as he and Maggie walk up to the meeting, but Maggie tells him to ignore it. They walk in, and everyone falls silent. Carol shows Maggie what everyone is looking at: a news story about the “family secret [Maggie] tried to hide.”

Maggie scrolls through. None of this is true, she insists. Peter pulls her out of the meeting, saying they should go. Becka and Jamie are just walking up. It’s not true, is it, Jamie? Maggie begs. Becka looks at them both, confused.