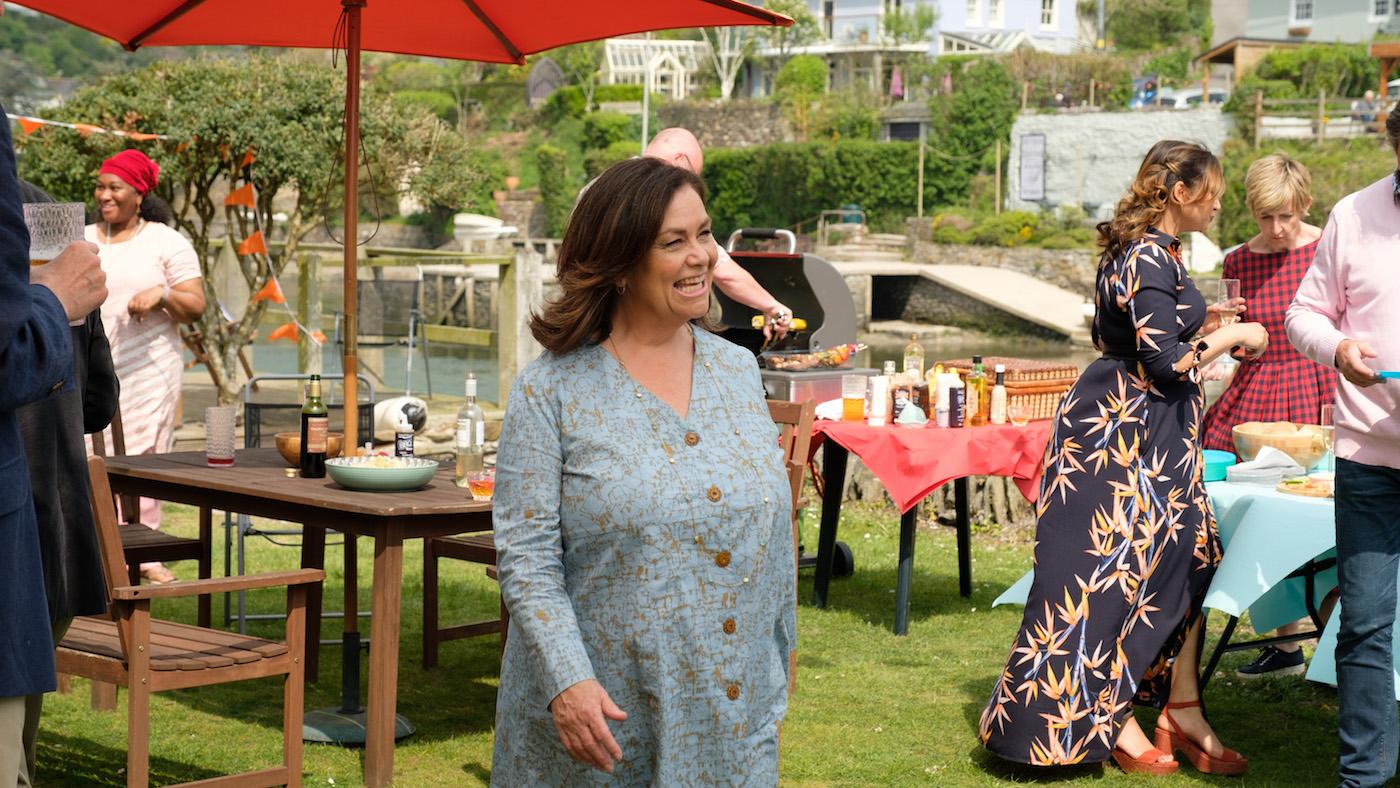 The Trouble with Maggie Cole airs Sundays at 7:00 pm and is available to stream. Recap the previous episode.

Maggie wakes Peter with a phone call after they spend their first night apart in 30 years. They apologize to each other. Peter promises never to keep another secret, and Maggie asks him and Jamie to meet her and Becka at Thurlbury’s anniversary party.

Jill has also had a difficult night. Having witnessed Karen kissing Peter, she knows she has to tell Maggie, whom she has barely spoken to since Radiogate. She no longer wants to go to the anniversary, and admits to Marcus that she only stole planning it from Maggie to punish her. Marcus convinces her to go, then admits that he has started writing a new book: a romance. Writing goes fast when you’re falling in love, he says, as he drops Jill off at the anniversary.

At least Jill didn’t fear danger over the night, like Roxie, who brought Josh to stay at her and her dad’s house after Alex left Kelly and Neil’s in a panic. Alex wants to flee Thurlbury but turns around at the last minute out of concern for what his debtors might do to his family. He calls Roxie and explains a bit of what has happened, and how he’s in too deep to call the police. He tells her he’s going to turn himself in to his debtors and apologizes for everything before hanging up. Roxie calls the police.

Alex meets his debtors at the pub and promises to do risky jobs for them to repay them. As they leave with him, Liam, who has gotten a job at the pub washing dishes, sees. Alex tells Liam to take care of their mom, while Syd and Brian watch. Liam runs.

At the anniversary, Jamie and Peter run into Karen, who is overly friendly with Jamie and solicitous of Peter. Maggie, with Becka, gets disdainful looks from people, but Jill eventually comes over and awkwardly says hello. I need to tell you something, she says.

Liam returns to the main room of the pub, pointing Brian’s gun at the thug who chased him. The other thug grabs Liam’s gun hand, banging it on the bar. The gun goes off, shooting Brian in the shoulder. Alex’s debtors grab the gun and flee, stealing Marcus’s car from him just as he is parking.

As rain pours down, Maggie angrily accuses Jill of trying to hurt her by making up a story about Peter. She pushes away from Jill, who tries to follow her across the street just as the debtors speed past. They hit Jill. She’s sent sprawling, motionless, on the ground.

When the police arrive, they notice the gun in the car with the debtors. One thug attacks a policeman, who subdues and cuffs him, while the other is tackled while trying to flee. Maggie wants to ride with Jill in the ambulance when it appears, but Marcus says no. He’ll call with any updates.

This is all my fault, Maggie says, mentioning how she was arguing with Jill about Karen. Peter admits that Karen did kiss him, and he was going to tell Maggie today—he promised he wouldn’t keep any more secrets. Maggie, Becka, and Jamie all believe him. He reveals that Karen was behind the revelation of Jamie’s secret as well as the forum posts calling for Peter’s ouster as headmaster.

Just then, Karen passes by. Maggie confronts her, shoving her against a pole. You can’t hurt my marriage, she says, before turning her back and returning to her family.

Emergency vehicles have arrived at the pub, although Brian is afraid of going to the hospital, given that he faces prison for deserting the military. Liam fears he’ll go to prison for accidentally shooting Brian. But when Neil and Kelly arrive and someone asks if they’re the couple who won the lottery, Alex emerges from the pub and says that they are—and that everything will be okay.

Syd has told the police that Alex’s debtors tried to rob the pub, and that Liam tackled them and Brian was shot in the struggle, saving Syd’s life. With the thugs apprehended, everyone’s problems will go away: Alex’s debt is erased and everyone can believe Neil and Kelly won the lottery.

Brian is safe, too: the bullet didn’t do any serious damage. In his hospital room, Syd gives him a pair of clothes and opens the window for him to escape. After closing the door and leaving Brian to flee, she runs into Maggie—Marcus has called with news of Jill, so Peter and Maggie have come to the hospital to see her. Syd explains Alex’s debt and what happened at the pub to a shocked Maggie.

Meanwhile, Peter overhears a man on the phone while he’s at the vending machine and recognizes the voice as that of the reporter who broadcast Maggie’s gossip on the radio, starting all of this. Peter strikes up a conversation as the reporter asks him to hold his coffee, then grabs the reporter’s phone from his coat pocket and drops it in his coffee—caffeinated revenge.

Maggie goes in to see Jill, who has just taken sedatives and is asleep. Maggie launches into a fervent apology, telling Jill, “I did this to you.” She explains everything her gossip led to: Alex’s debtors recognizing him in the paper, Liam finding Brian’s gun, Jill being run over. “It’s never just words,” she says. “I’m so, so sorry.”

Jill opens her eyes—she hadn’t taken the sedatives yet, and heard everything. She forgives Maggie, and thanks her for one important thing: if Maggie had never done the radio interview, Jill wouldn’t have met the man she’s falling in love with. Marcus overhears from the doorway and comes in to kiss Jill. Maggie leaves them alone, before remembering that she has yet to apologize to Marcus for gossiping about him. Interrupting an intimate moment, she does so and is quickly sent away.

She gives Peter his own kiss in the hallway. They meet Becka and Jamie at the beach for a walk. All is right again. Maggie even has a new rumor to spread.