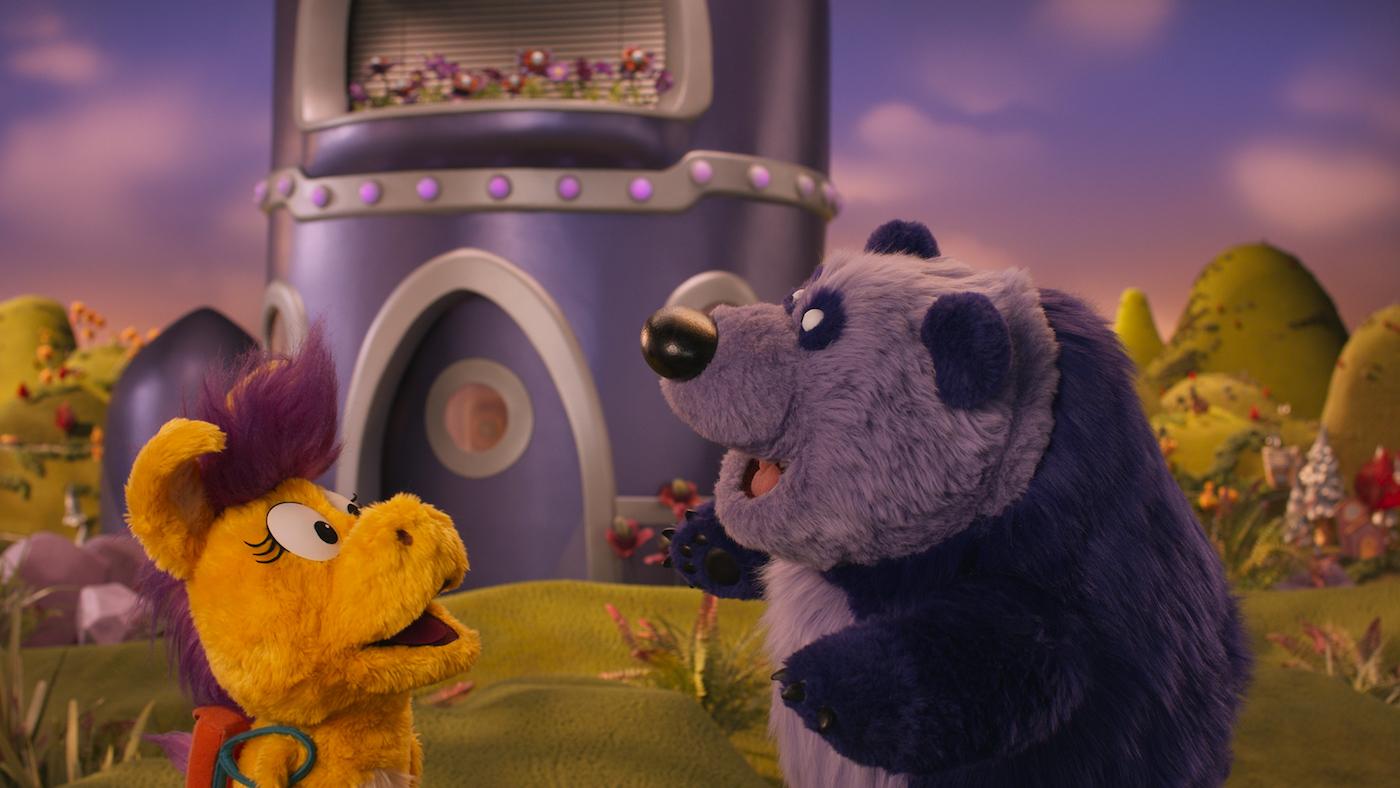 The determined Donkey Hodie goes on adventures with friends like Purple Panda in the new children's show named after her. Image: Courtesy Fred Rogers Productions

Donkey Hodie premieres Monday, May 3 on WTTW and the 24/7 WTTW Kids channel.

A purple spaceship has landed amongst verdant hills in WTTW’s Grainger Studio, bringing a lovable lilac panda to enjoy the company of a determined young donkey with a shock of magenta hair. The studio has become a new place—it has transformed into Someplace Else.

Someplace Else can be found near the puppet-filled Neighborhood of Make-Believe from Mister Rogers’ Neighborhood. It was established by Donkey Hodie when King Friday ordered him to build his windmill home “someplace else.” It’s now the playground of the founder’s granddaughter—she’s also named Donkey Hodie, while he’s now known as Grampy Hodie—and the setting for a new show aimed at children aged 3-5. Its name? You guessed it: Donkey Hodie.

“We decided that we wanted to do a preschool show about big dreams and overcoming obstacles featuring a rebooted version of Donkey Hodie, the character created by Fred Rogers,” explains Ellen Doherty, the chief creative officer of Fred Rogers Productions and executive producer of Donkey Hodie. “We wanted to do it as a puppet show because the expressiveness of puppets is different than the kind of expression you get in animation. That kind of emotion you can get with puppets is very much like the big emotions that young children have.

“When we decided that we wanted it to be a puppet series, Adam and David were the first people we wanted to call.”

Adam and David Rudman are brothers who have worked on children’s shows ranging from Sesame Street to Nature Cat, which is produced by their company Spiffy Pictures, a co-producer of Donkey Hodie with Fred Rogers Productions. David is among other things a puppeteer who plays Cookie Monster on Sesame Street, while Adam is a scriptwriter who first worked with Doherty on PBS KIDS’ Cyberchase.

“We grew up watching Sesame and Fred Rogers and loved them, and we just love the opportunity to work with Fred Rogers’ legacy and be a part of it and find ways to update it when it calls for it,” says Adam. “We feel very lucky.” 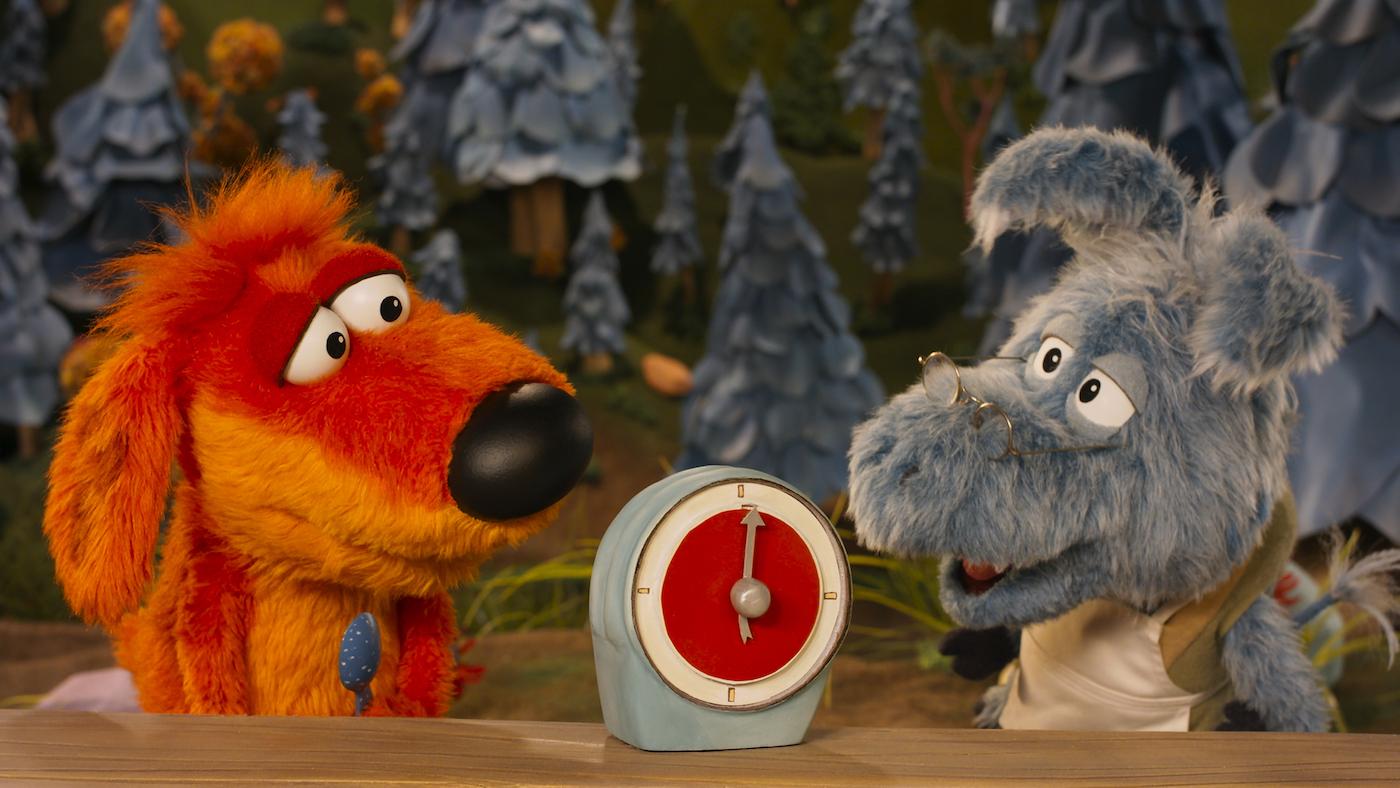 While Donkey Hodie is inspired by Fred Rogers and includes some of his songs, it’s an entirely new show, with novel characters, updated favorites, and new songs, too. “We based a lot of the characters on existing characters that Fred Rogers created, but then we redesigned them, we gave them new personalities. So it’s all new,” David explains.

“It was fun to do research, going through all the characters that he created,” Adam adds. “Some of the secondary, third-tier characters were so interesting and funny and bizarre that we gravitated to some of those.”

One of those lesser-known characters who has been completely reimagined for Donkey Hodie is the spaceship-owning Purple Panda. “They weren’t necessarily trying to mimic the voice or the character of the Purple Panda from the original Fred Rogers series, so they gave me freedom to explore new things with him,” says Frankie Cordero, the puppeteer behind Panda.

Like the Rudmans, Cordero is a Chicagoland native who went on to work on Sesame Street. (Cordero plays Rudy and has trained puppeteers for international versions of the show). The son of a children’s magician, he met David through an old classmate whom his father connected with at a conference. The summer after his junior year of college, Cordero worked with the Rudmans on a Nickelodeon DVD series called Curious Buddies; a couple years later, he worked on their Jack’s Big Music Show.

“Once in a while, I pinch myself on the way to work at WTTW,” he says. “When I was a kid, I was a huge fan of Sesame Street and Mister Rogers, so it’s just a bit surreal to be driving in to our local station here working on a Fred Rogers production. I sometimes feel like this is a dream come true.”

On Donkey Hodie, Cordero not only plays Panda and a few other characters (including one of Adam’s favorites, a penguin referee), but also builds some puppets and will be directing some episodes.

Catch a glimpse of some of the Donkey Hodie sets being constructed in WTTW's Grainger Studio in the video below.


Most of the episodes have been directed by David, who also plays Bob Dog. “Sometimes it’s easier, because I know what I want and don’t have to explain it—I can just do it,” he says of directing and performing. “But it’s very hard to have your eye on everything when you’re performing. Playback is pretty important.”

Another video tool became especially important over the past year: Zoom. Filming on Donkey Hodie began in WTTW’s studio in the fall of 2019. When the COVID-19 pandemic shut down the country in spring 2020, production of the show stopped. After several months, it restarted with safety protocols in place, including the limiting of the number of people in the studio.

Doherty and the supervising producer began overseeing shoots from afar via Zoom, constantly texting and emailing and calling the team in Chicago. “Everybody’s trying to do a lot of what Donkey does: be resilient and persevere through these very challenging times,” says Doherty. “So the theme of the show is a metaphor for the last year of producing a show under a pandemic.”

Work on an episode begins with a premise based on the show’s curriculum, which is then turned into an outline and eventually a script, explains Adam, the show’s head writer. Each stage involves input from numerous people, and a script usually takes about two months to write.

The art department and puppet builders then set about creating any new props, costumes, set pieces, or characters called for by the script. Meanwhile, the Rudmans storyboard the episode, determining what happens in every shot. “Sometimes it gets really tricky dealing with the limitations of puppetry: they can’t pick things up; they don’t have hands,” David explains. 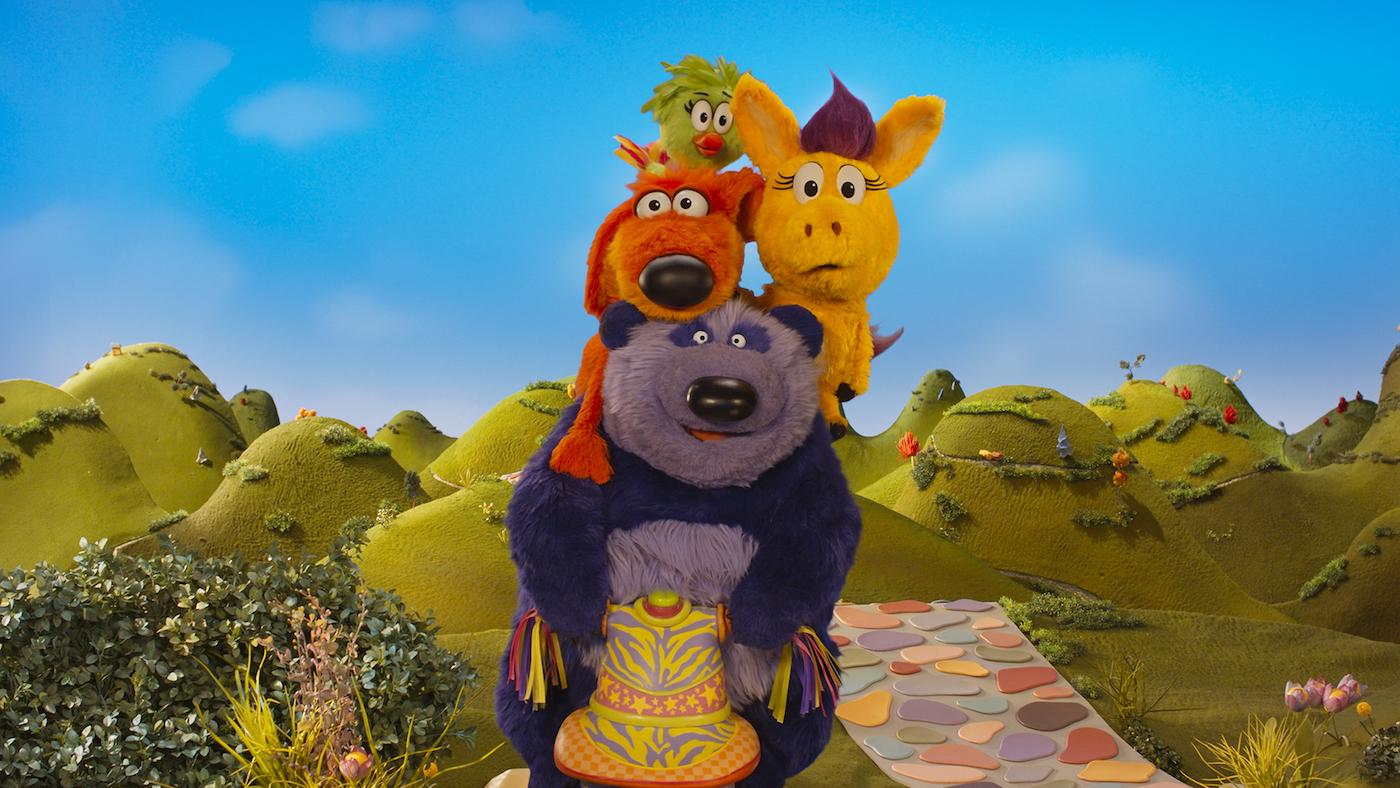 After all that, production begins. “Usually before filming a scene, we read the scene as the characters, and then we’ll note if there are any props that need to be handled,” Cordero explains. “Sometimes we’ll do a walk-through rehearsal on camera, but sometimes we’ll just go straight to shooting.”

“We try to anticipate as much as possible in advance,” Doherty says. She then offers commentary as the filming unfolds, for instance, “‘There’s a lack of clarity in that line read, or that gesture doesn’t really come through.’ Live action is kind of like basketball or hockey, which are very fast. You’re in the moment all the time as things happen. It’s true that every frame has to be right, but you’re really looking more at the whole thing.”

A full, two-part episode takes a week to film, and five or six puppeteers are present on set, including assistants. “There are certain things you can’t do with one person, like clapping or handling books and different props,” Cordero explains. Some ad-libbing occurs. “Our performers are so talented and funny, they’ll come up with lines, something that wasn’t figured out beforehand, and we like to encourage that,” says David.

“We definitely go towards the wacky, silly, fun, physical-comedy way, as long as there’s a great character-driven story,” says Adam. “We just want children to enjoy it and have fun, and actually parents, too. And definitely to learn as they laugh.”

“We take inspiration from the playful and funny side of Fred [Rogers],” says Doherty. “It’s clear that Fred had a very creative and playful side. Always it’s the core of helping children navigate childhood and really respecting that kids go through tough stuff. We want to give them tools that they can use in their daily lives, but in a fun way, with great music and great characters that are modeling empathy and perseverance and grit.

“We hope that kids will watch the show and feel that they too, just like Donkey, can do hard things.” Like build a vibrant land of Someplace Else in a blank studio, land a spaceship there, and produce a children’s show during a pandemic. 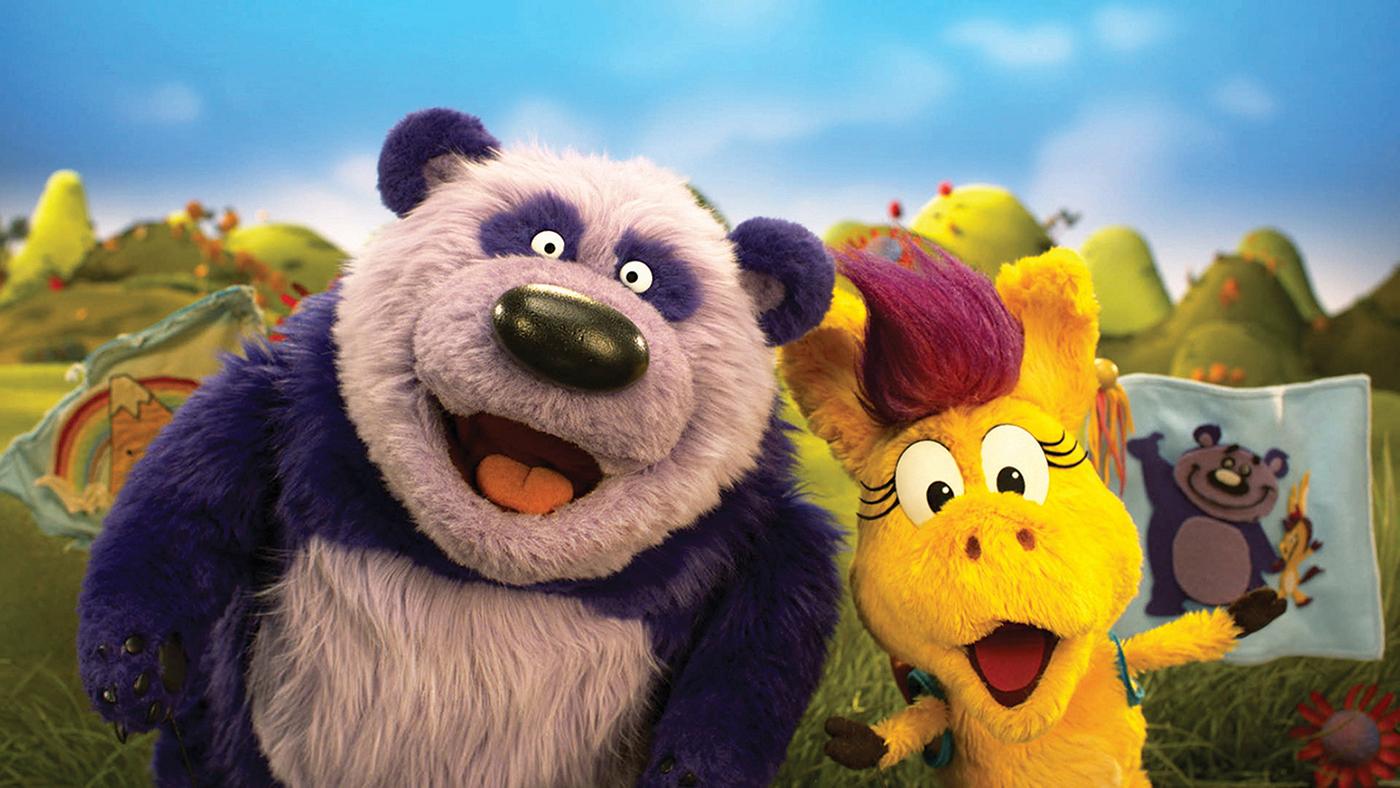