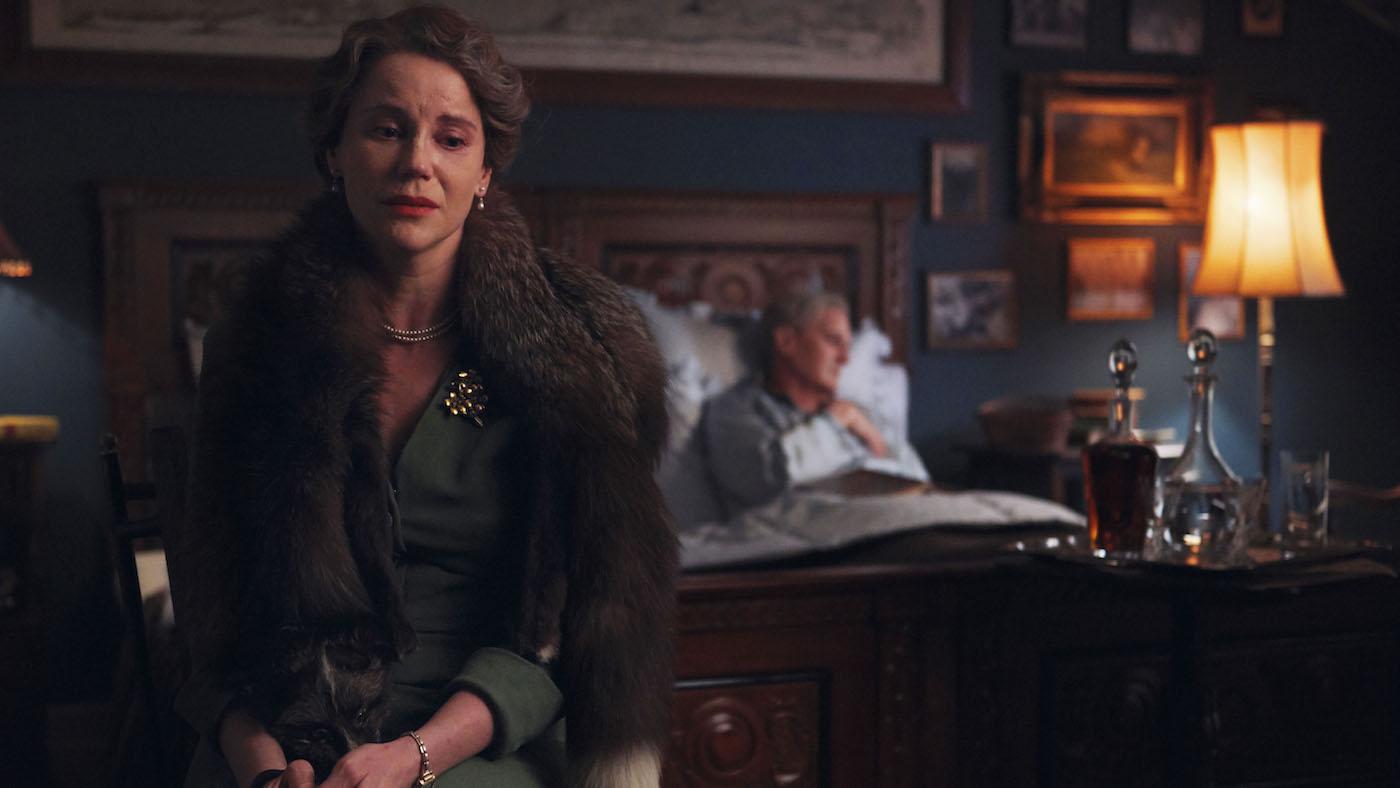 Atlantic Crossing airs Sundays at 8:00 pm and is available to stream. Recap the previous episode.

The suicide of General Fleischer hits Olav hard. He drowns his sadness in drink at the pub, and when Nikolai tries to pull him home he angrily resists. When he insults his loyal friend, Nikolai slaps him and ushers him into a waiting car.

The next morning, Haakon and Nikolai drag the hungover Olav to a Cabinet meeting. There, he is nominated and overwhelmingly voted in as Norway’s Chief of Defense—a position he had wanted Fleischer to hold.

Olav also receives a letter from FDR, urging him to visit his family in the United States over the Christmas holiday. He has barely seen his children over the war years, and they’ve become accustomed to America as they grow up quickly. Harald speaks English better than Norwegian now, and Märtha overhears her daughter saying she would rather stay in the States even after the war is over. Märtha asked FDR to write the letter, believing Olav might take it better from him instead of her.

She’s wrong. Olav says he’ll only go if the president demands it, and FDR doesn’t. After the holiday and a hopeful New Year’s radio address—the Allies are coming closer and closer to victory in Europe—Olav is advised by Haakon that he should have seen his family.

Olav takes his father’s advice and concocts an official excuse to visit Washington. In advance of the Yalta conference between FDR, Churchill, and Stalin, he must ask FDR to prevent Stalin from annexing parts of Norway after the war, as the USSR has already done with Finland. FDR, whose health is declining, sees through the ruse: you could have just called me, he says. As Olav leaves, FDR tells him he hopes to see him back in Washington for a victory party—together with Märtha.

Märtha and the children are visiting the White House and are surprised by Olav’s presence. He thanks Märtha for taking such good care of the children over the past years, then maximizes his time with his children, especially his heir and youngest, Harald.

Märtha invites him back to her home, where he falls asleep reading to Harald. He leaves early the next morning without saying goodbye. Märtha wakes up just as he is driving away and runs after, shouting “No!” He doesn’t see.

Upon his return from Yalta, FDR is in even worse health. He cancels a press conference. When Märtha tries to see him, his aide Harry tells her that FDR is going to his health retreat in Warm Springs, Georgia. He will probably not return.

Märtha insists on seeing FDR, against his wishes. She faces away from his wasting form to spare him embarrassment and recalls their pleasant drives together, singing a song from one of them. She leaves him. He dies not long after.

Ulla’s friend, whom Olav met once at the pub, also dies, while fighting in the war. Olav insists that he receive a medal of honor, and delivers it himself to his widow. He learns that she lost her first child suddenly, and yet she still says they must look forward, to a better life and better Norway.

It is on the way: the Germans surrender, to the joy of the Norwegians. Olav decides to return to his homeland before all the Germans have even left, despite Haakon’s fear for his safety.

He finds Skaugum, the family estate, in bad shape, with Nazi gear and records spread throughout the space. He smashes a portrait of Hitler and throws books off his desk in a rage, before sinking to the floor and looking through photos of his family at Skaugum—photos he purposefully brought with him from London.

When Märtha and the children return to Norway with Haakon not long after, they are greeted by flag-waving Norwegians on the docks and in boats. One of those boats holds Olav, who boards their ship as it approaches the harbor. I couldn’t wait until you arrived at the dock to see you, he tells Märtha. I should have come sooner, he continues. They kiss.

Harald doesn’t even recognize Skaugum when they arrive there, its rooms still being cleaned and restored. A new desk is waiting for Märtha in an office Olav has set up for her, with the medal bestowed upon her by Haakon sitting proudly on it. As the children run around outside, Olav chases after them and Märtha films. A bit of their pre-war life has been restored.