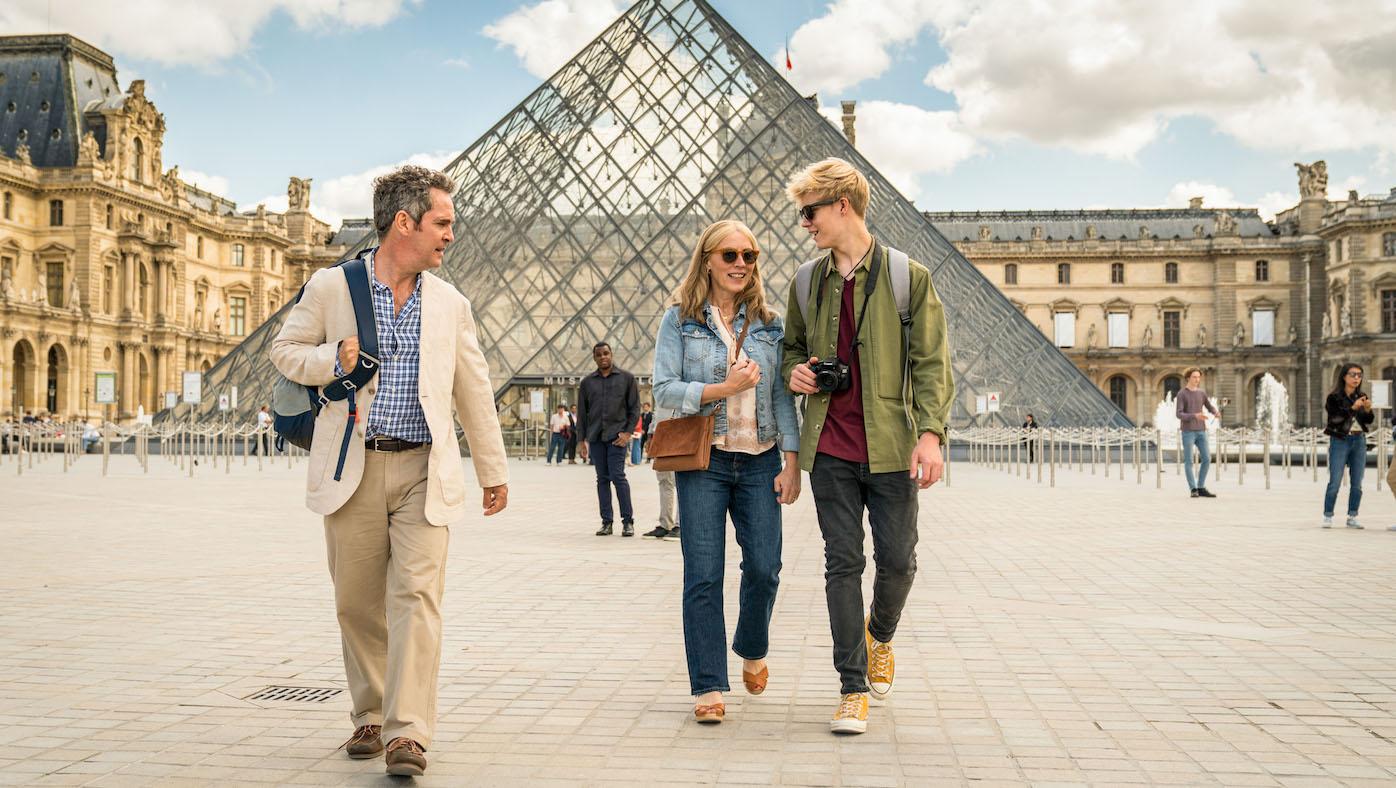 Douglas struggles to connect with his son and his wife wants a divorce, but maybe a vacation can fix things. Photo: Masterpiece

Us is available to stream. Recap the second part.

“I think our marriage might be over,” Connie tells Douglas as they lie in bed trying to fall asleep. They’ve been together some twenty-four years and have a teenaged son, Albie, who will soon be off to university, but Connie is ready for change. It’s not that she dislikes Douglas; she just needs something new. The couple talk through the night, Douglas trying to understand while Connie attempts to articulate her feelings.

Day has dawned when they finally exhaust the conversation and try to sleep. But the doorbell wakes them: grocery delivery. Douglas is irritable now; whatever truce he and Connie had reached is broken now by his anger. He gathers things to throw away at the dump, then sits in his car and cries.

When he returns home, Connie tells him they should still go on their planned three-week holiday, a grand tour of Europe, for Albie’s sake. Douglas refuses.

But when Connie leaves for work, Douglas watches through the window, then bolts after her car—sans shoes—finally catching her in the street. We should go on the holiday, he tells her while cars honk. Maybe I haven’t been paying enough attention to you.

At home, he types out a “note to self,” listing ways to show Connie that he can change—or change her mind. All he has to do is be a little bit less rigid and get along better with Albie.

Easier said than done. Douglas is a biochemist who loves to natter on about facts and figures. He tracks his steps and is obsessed with getting 10,000 a day, he plans incessantly, wants everything to be perfect, and claims to like art but not to understand it. Connie and Albie, meanwhile, are more artistic: she pursued art early in life and now works in community arts, he is a budding photographer. Both are spontaneous, comfortable and happy at parties and with other people.

Connie and Douglas met when his bohemian sister invited him to a dinner party and set them up. Douglas quickly got into an argument with a circus performer over medicine and the importance of science. Connie was in a phase of doing lots of drugs and longed for more inhibitions; Douglas personified inhibition. Eventually Connie asked him to walk her home—eight miles away. At the end of it, she invited him to her room.

Despite Douglas’s attempts to show interest in Albie’s photography, Albie goes off on his own to take photos and try to busk once they arrive in Paris. Connie and Douglas get a dinner to themselves. When he tries to revisit the past, she encourages him to live more in the moment. They ride electric scooters after the meal and end up having sex.

I’m confused, too, Connie tells Douglas afterwards. Then their sleep is once again interrupted, this time by first music from the adjoining room—Albie’s—and then the unmistakable sounds of sex. They try to ignore it and read through the night.

They meet Albie’s friend the next morning, a free-spirited girl named Kat who has been wandering around Europe on her own for years. Douglas is affronted when she pockets food from the buffet.

He tries to bond with Albie by talking about Kat after she leaves them, but Albie is embarrassed. At the Louvre, Douglas still won’t stop talking, now babbling incessantly about the art, to the chagrin of Albie and Connie. He’s trying to be more spontaneous, less rigid, but he’s having a hard time of it. When he accidentally gets chili oil in his eyes during dinner at an Albie-selected Sichuan restaurant, he abruptly leaves the restaurant.

It’s difficult to live in the moment when the moment is so hard, he tells Connie when she calls. I feel like I’m losing you both, he says as she finds him. He wonders aloud what it would have been like if their daughter had survived. Connie was pregnant with a girl when they got married. She was born a few weeks early and did survive the delivery, but that’s all we know. Connie and Douglas still have a box labeled “June” in their house. 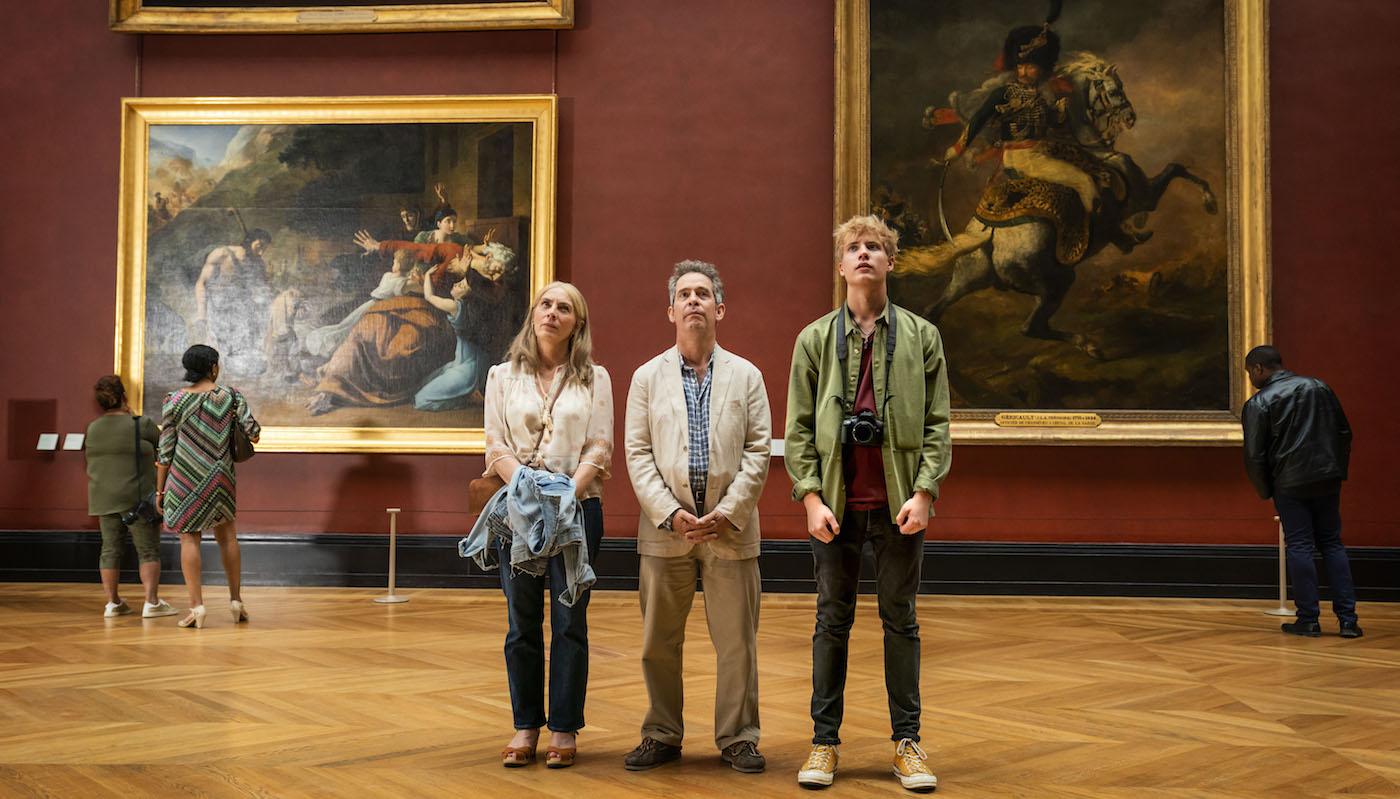 Connie and Albie are artistic while Douglas claims to like art but not understand it. Photo: Masterpiece

In Amsterdam, Connie and Douglas are startled when Kat shows up—Albie invited her. She wants to show off the partying side of Amsterdam, but Douglas has a strict itinerary and resists, snapping at Albie for wanting to change plans. Connie decides to join Albie and Kat at a weed shop but can’t convince Douglas.

Instead he has a few drinks alone before eventually deciding to join his family. Albie tells Connie he’ll text Douglas their location—but he never does.

Douglas has always worried he’s a killjoy, from the time he was first dating Connie. A conversation about his fear led her to first say “I love you.” He eventually reciprocated, after she joined him at home—he had left a party early.

In Amsterdam, he gets frustrated looking for his bike and smashes someone else’s, then visits a weed shop for something that will make him relax. He smokes, alone, in the Jacuzzi in his room at the hotel. When Connie finally returns from a night of fun, he tells her that he regrets not being more light-hearted over the years, and that he loves her and Albie both. She has fallen asleep.

But a dispute at breakfast is a breaking point. When Kat and Albie try to stand up for a waitress to some rude patrons, Douglas intervenes, apologizing for his son’s “idiot” behavior.

Albie storms off. Connie tells Douglas he should have stood up for his son. This holiday has become unbearable, she says; we should go home. I thought you could change, that I might recognize a trace of the man I fell in love with, but “the reason I can’t love you is because it’s you.”

In their hotel room, they find a note from Albie. He has left with Kat. I feel like I can’t do anything right, he writes, and it seems like you two need to work some things out. Don’t try to get in touch; I’ll reach out when the time is right.

At the train station—Connie wants to go home—Douglas gets a call from his hotel in Venice. It seems Albie has moved the reservation up, pretending to be Douglas. As Connie moves away on an escalator with their luggage, Douglas decides to go to Venice and find his son. He wants to correct all his mistakes.

In Venice, at the hotel he and Connie stayed in on their honeymoon, Douglas asks the concierge to tell him if Albie shows up—but not to tell Albie Douglas is there. Lacking luggage, he buys an “I Love Venice” shirt for a change of clothes.

At an early breakfast, the only other woman there strikes up a conversation, but he cuts off the conversation to go search for Albie, showing photos of his son to buskers and people on the street.

He again runs into the woman from breakfast, whose name is Freja. They have coffee and he describes his plan to find Albie. She’s alone in Venice, too, celebrating her divorce. Once again, Douglas cuts the meeting short to search for Albie.

That evening, he talks to Connie as he soaks his blistered feet. I have gone a bit mad, he tells her: maybe it’s a nervous breakdown, or a midlife crisis, or a combination of the two. But he’s determined to find Albie.

He might be trying to atone for an argument he had with his son sometime earlier over Albie’s future. Douglas fears Albie won’t survive as a photographer and wants him to find something more practical for a career. “It’s a mistake to believe that you’re special,” he told his son.