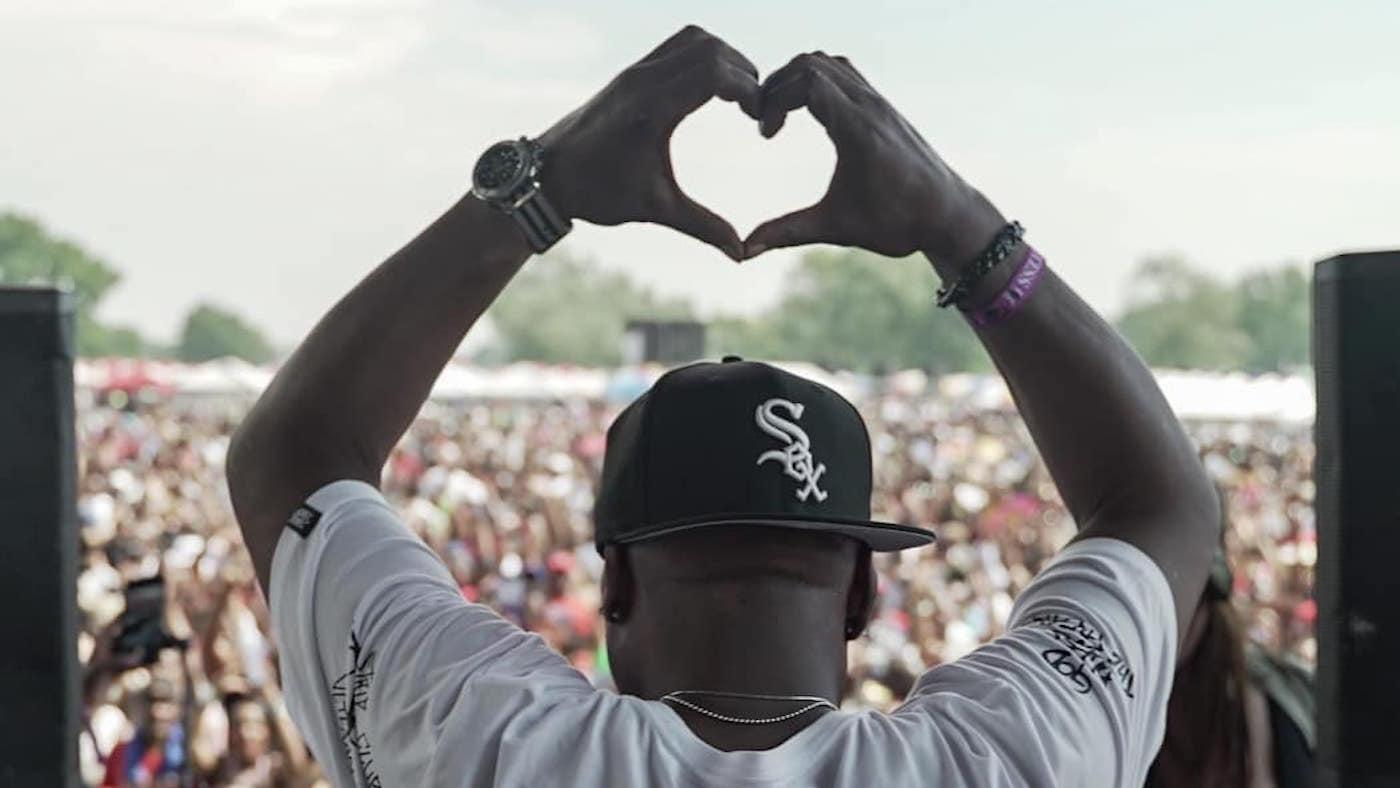 The first time Alan King ever DJed was at his eighth grade graduation party in 1977. “I used my dad’s stereo—I think I had one turntable and a cassette deck,” he recalls. “So I was just putting on records one after the other. But that day, that process of seeing how people reacted to what I was playing—I’ve been hooked ever since.”

Decades later, he performs at and helps organize an annual house music festival that attracts upwards of 40,000 fans to Chicago’s Jackson Park every Fourth of July weekend: The Chosen Few Picnic and Festival, which this year will take place virtually on Saturday, July 3, from 10:00 am to 10:00 pm. King will perform along with the six other members of The Chosen Few DJ collective, as will guest DJs Louie Vega, David Morales, DJ Spen, and vocalists Monique Bingham, Lady Alma, and Dajae. Tickets are $10 on the digital platform StageIt, which will include an active chat room.

“Everybody in the world now loves the chat,” says King, who has been live streaming DJ sets every Saturday night on the streaming platform Twitch over the course of the pandemic. “Obviously I’m not playing for a [live] crowd, and I don’t have that energy and reaction to feed off of. The chat has kind of taken the place of that. You can’t necessarily read everything, but you see a lot of hearts going up.”

That feeling of community has been essential to house music since its origins in Chicago clubs, basements, and lofts on the South and West Sides in the late 1970s and early 1980s, when King started attending and DJing spaces such as First Impression, Sauer's, and The Loft. (He was even once hired to DJ the prom at Lincoln Park’s Francis W. Parker school.) The influential DJ Frankie Knuckles presided over a club called The Warehouse just west of the Loop, which was frequented primarily by gay Black and Latino men, and is now regarded as the birthplace of house music.

“It was a magical experience,” recalls King of The Warehouse, which he started attending when he turned 18. “Frankie, of course, was amazing. From 1981 on, I was at The Warehouse like every week.”

King had joined The Chosen Few the previous year. Wayne Williams founded the collective in 1977 and recruited his stepbrother Jesse Saunders, who would eventually release “On and On,” which many consider the first house track. “I wouldn’t say we were rivals, but we were doing parties kind of in the same scene,” King says. “I think one of the reasons Wayne asked me to join was that I had my own records,” he laughs.

Including brothers Tony and Andre Hatchett, The Chosen Few consisted of five DJs back then. (Terry Hunter and Mike Dunn joined decades later.) “In the early days, I think that the biggest contribution we made was that we brought the music and sort of that loft underground experience [associated with The Warehouse] to straight teenage kids,” King says.

Now, though he considers their biggest contribution to be the Picnic and Festival. It began as a sort of reunion of The Chosen Few after several of them had moved away from Chicago, including King, who had gone to college and law school. And it took place at a literal reunion, that of the Hatchett family, which met annually around the Fourth of July by the Museum of Science and Industry for a cookout.

“People would always say, ‘When are you guys going to play together again?’” King says. “So the first thing we had was a party, because we were all home around Christmas [of 1989]. And it was one of those nights where it was like 80 below, so we thought, ‘Nobody’s going to come to this party.’ And then all of a sudden, it’s packed. We decided after that, ‘We have to do this again, but we’re not doing December any more. What other time of year is everybody home?’ And it was pretty much Fourth of July.” 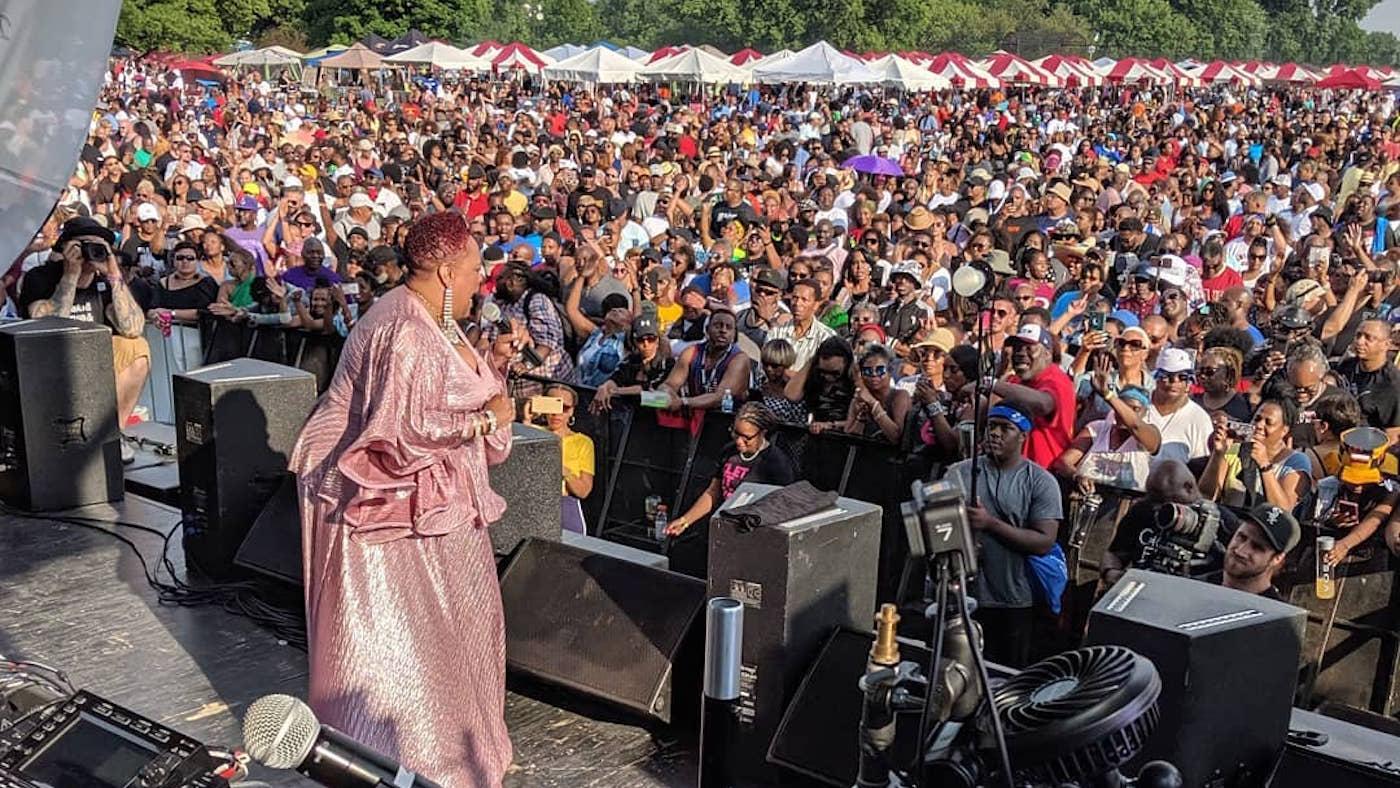 “I don’t know if there’s anything else like it," says DJ Alan King of the communal atmosphere of The Chosen Few Picnic and Festival. Photo: Courtesy The Chosen Few DJs

So in summer of 1990, The Chosen Few joined the Hatchett picnic. “We probably had 40 or 50 people,” King recalls. They set up turntables on a piece of plywood balanced on two garbage cans, and “for the first few years, music was a part of it, but mainly we were out there throwing a football and playing softball. We really had no plans for it, but year after year, we kept doing it.”

It grew until a watershed moment—emphasis on the water—in the early 2000s that The Chosen Few refer to as the “monsoon year.” “It rained out there so hard, and we were thinking, ‘It’s a wrap, we’re going to pack up the equipment and leave,’” King says. “There were probably a couple hundred people out there, and nobody left. That was when it really hit us: ‘Yeah, we got something special going on here.’” Only after that year did people start bringing tents, beginning a tradition in which attendees bring grills, coolers, food, and chairs to camp out for the day.

As the Picnic grew, it eventually had to find a bigger space. The Chosen Few tried the Midway Plaisance one year, but realized immediately that it was too small and moved to Jackson Park, where it remains (except this year and last year, when it was also virtual). For the first twenty years, it was free—“we used to pass the bucket around for donations,” King recalls—but eventually the logistics and scope of the event required the institution of paid tickets.

Now the Picnic and Festival attracts people not only from the South Side, but around Chicago and even the world. In ordinary years, it draws about 40,000 fans. In 2015, President Obama honored its 25th anniversary with a video greeting. King, a lawyer by day who lives in Kenwood, had known Obama since the mid-1990s.

A few weeks before the 2015 picnic, he had attended a party at the White House and spoken to the president about the event’s 25th anniversary, emphasizing that “one of the things that’s so special is we get 30 or 40 thousand people in a park on the South Side of Chicago, and we’ve had absolutely no incidents of violence, we’ve had no security incidents of any significance. I think that kind of drew him in.”

King asked if Obama would record an audio greeting, not expecting much. “About three days later, I’m sitting in my office and I get a call from the White House saying, ‘The president has a video for you,’” he recalls. Wanting to surprise everyone, including the rest of The Chosen Few, he kept it to himself. “I had this video burning a hole in my phone for a week!”

King credits the Picnic and Festival’s success with its start as a family reunion and maintenance of that communal atmosphere through the years. “It means a lot to be part of something that is so important to so many people,” he says. “I don’t know if there’s anything else like it.”

“There really is a whole culture surrounding house music,” he continues. “It’s about music, obviously, but also peace and togetherness and love. It’s the reason that nothing has ever happened with all those people in the park.

“I fell in love with dance music early on, and seeing how you can provoke reactions and emotions in people by what you’re doing, that excitement never left me. I never imagined that at 58 years old I’d be as immersed in this as I’ve ever been, and enjoying it as much as ever. It’s just the feeling of being able to, in a word, make people happy.”