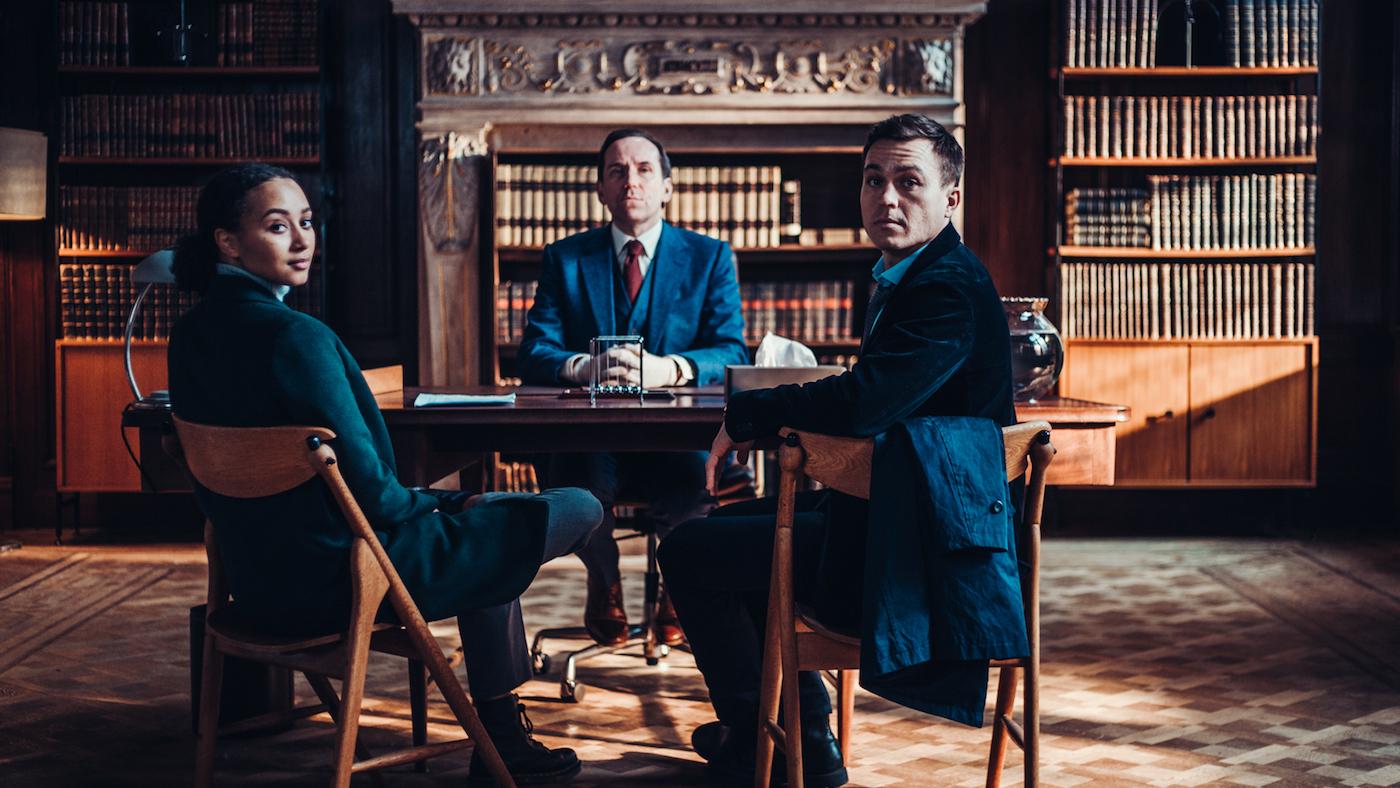 Lisa and Dan again go to Professor T for guidance when someone is poisoned at a museum reception. Photo: Sofie Gheysens

A man gulps champagne at a museum reception. He falls, foaming at the mouth, and is soon dead.

He’s the chief librarian at the university, and had no spouse, children, or seemingly even friends or enemies.

Poison is a rare method of murder, Professor T tells Lisa and Dan, who have been sent by Christina for advice on the case. Women are much more likely to use it than men. That statistic isn’t much, but it could at least help narrow down the list of suspects, which includes over a hundred people, since the poisoner could have been anyone at the gala.

Professor T does recognize one name on the list: Claudine Frogatt, who also works at the university. Gossip has it that her husband, Roy, is a philanderer, Professor T’s assistant Mrs. Snares tells him—she was eavesdropping on his conversation with the detectives.

Professor T visits Claudine and mentions her husband’s infidelity, to her shock, and warns her to be truthful when she is questioned by the police.

She shows up voluntarily to speak to the detectives. She suspects her husband is having an affair, given that she found a receipt for a hotel room. Furthermore, a man appeared at their door recently and threatened him. When questioned, Roy claims not to remember the threat. He says he angers plenty of people as a member of the council planning board.

Lisa informs Professor T of these updates, and he admits he talked to Claudine. Do you think she’s the murderer? Lisa asks. No, he replies. Then why, she wants to know, did you have me waste time speaking to her?

Professor T does his own digging into the Frogatts when the dean comes to visit. The dean, who was a museum trustee with Roy, describes him as a “preening popinjay” who bought his way onto the board. The dean also mentions a spate of very late returns recently made to the library by a certain professor. In exchange for a moratorium on late fees, might the dean discuss Professor T’s return to his childhood home, on behalf of his mother?

No. Professor T won’t even let his mother in the house to talk to her, instead shouting at her through the window. He has at least replaced the broken fridge in the home full of memories of an alcoholic father and a suicide.

Christina has a proposal for Professor T. Proposals don’t work well for us, he tells her, so let’s call it a proposition. He then orders a bouquet with the message, “Sorry.”

Christina wants to hire Professor T on an ad hoc basis. He joins her in the questioning of a woman who has just lost her husband.

Jonathan Fell was found dead at a construction site, having fallen from a high place. Given that his daughter has leukemia, it’s assumed a suicide—although Lisa remembers a statistic that most suicides remove their glasses first, and Jonathan didn’t.

Lena Fell is initially too broken up to answer questions, but responds to Professor T’s blunt inquiries. Jonathan was an optimist, unlikely to have committed suicide, although he did harbor anger. The Fells discovered that their home was built on the site of a zinc factory, and the contamination may have caused their daughter’s leukemia. Neither the council nor the construction company has thus far been held accountable; Jonathan had been working two jobs to pay the legal fees.

Roy Frogatt was in charge of contamination testing for the council. Jonathan, it is deduced, was the man who threatened him. Cyanide was also purchased from Jonathan’s laptop.

Lisa and Dan interrogate Roy. He donates a lot of money for his income, Professor T has pointed out. Lisa asks if he was bribed by the construction company; he says no. But a footprint at the site of Jonathan’s death has a nice sole, like that of Roy’s shoe. Furthermore, his fingerprints are on Jonathan’s phone. Roy had called Jonathan to the site to try to bribe him to drop his legal case. Jonathan recorded the interaction, Roy tussled with him, and Jonathan fell. Roy then erased the recording from the phone and left, hoping it would look like a suicide.

Lisa is troubled that no one saw Jonathan at the museum reception, and by Professor T’s statistic that women are more likely to use poison, as she explains to Dan at the pub before leaving him after a phone call that makes him jealous of what he believes is a boyfriend. She speaks again to the caterer and learns that Lena Fell worked the reception off-the-books, for cash.

Professor T visits Lena at the hospital, telling her he grew up without a father and that her daughter will need her mother. You must unburden your conscience, he says.

Lena admits under questioning to attempting to poison Roy. Jonathan had no part. She only went through with it when she heard Roy boasting about his donations at the reception.

Professor T finds a note in his office from Mrs. Snares: thanks for the bouquet (he had forgotten her birthday), and don’t feed the fish (which he accidentally killed, and she has replaced). Lisa asks him to accept Christina’s proposition—she could learn a lot from him. He already has.

And Lisa has already learned a lot: in a lecture, he reads to his students from one of her old papers, the product of what he calls a “first-rate mind.”