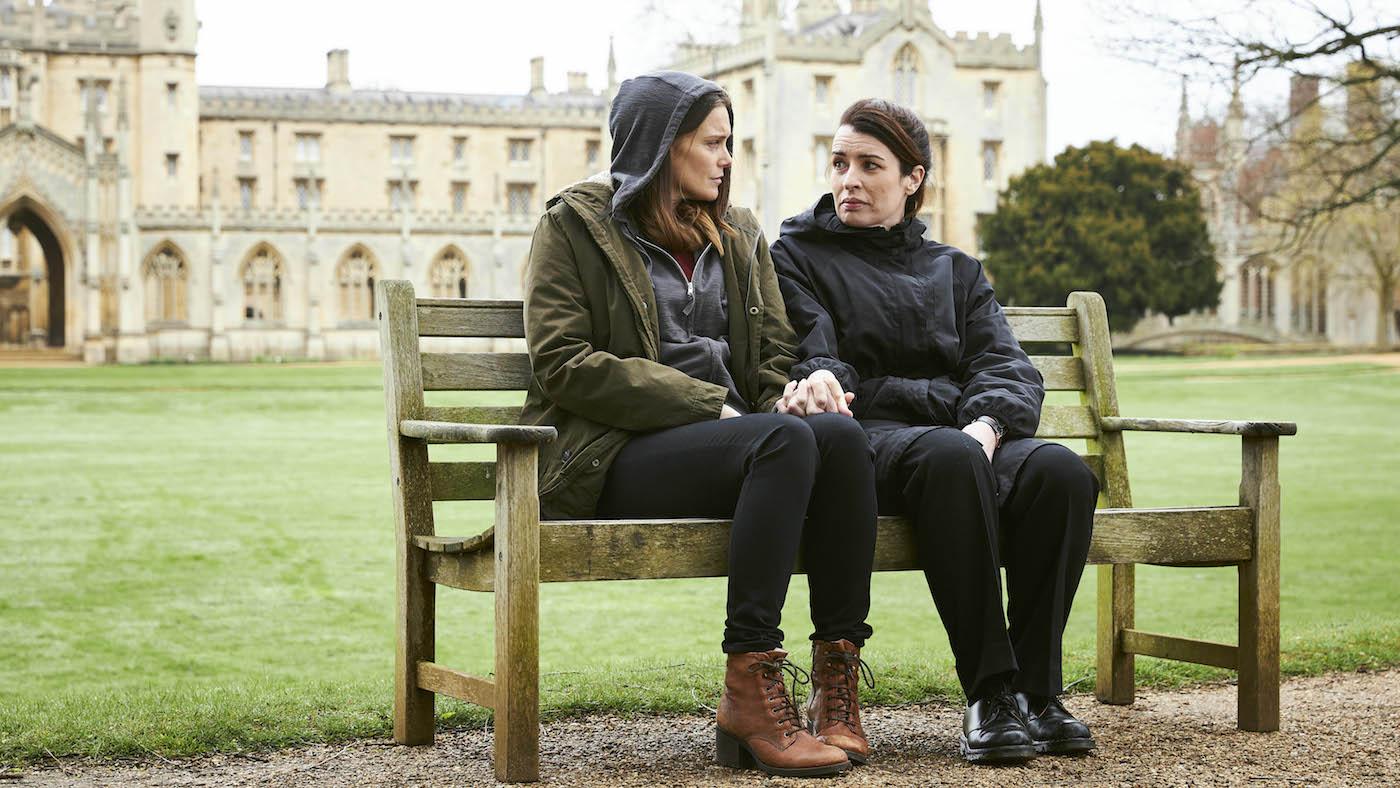 Fiona and Liz meet anonymously, as do Ram and Dean, to brief each other on police interviews. Photo: Mainstreet Pictures LTD

The detectives have noticed that, amongst his brushes with police, Matthew Walsh was cautioned after an altercation at a pub frequented by police trainees. It occurred three weeks before his last known appearance.

When Fiona Grayson and Liz Baildon meet as anonymously as possible, Fiona fearfully asks Liz about the pub—what if the detectives find out about it? Or about what Liz did for Fiona? Liz reassures Fiona that they can’t be traced to those things. After checking Fiona for a wire, Liz tells her to just stick to the “truth, like we agreed,” if the detectives interview her again about the night of Walsh’s disappearance. Liz has set up a Hotmail account if Fiona needs to contact her again. She kisses Fiona goodbye and tells her, “You’re still beautiful. I hope your life has been happy.”

Cassie and Sunny meet with the person who trained the police class that included Liz and all the rest. His prejudices are obvious as he speaks about Ram, whom he believes could have done something terrible—he was cocky, angry, a risk-taker who frequently “played the race card.” If he were white, he’d probably be in jail by now, he asserts with no evidence. Dean was the opposite, an analytical team player, although a loner socially. But honest.

Liz was a natural, a great team leader who was very close to Fiona, who hated being in the academy. Rob Fogerty wasn’t the sharpest, but was very gentle and not at all violent. The one thing tying them all together is that none had a guest at their graduation—very unusual.

It seems they do still have each other, to an extent. Ram and Dean meet in a secluded forest. If they both continue to stick with the truth in talking to the detectives, they’ll be fine, they reassure each other. They allude to a recent job carried out by Dean—presumably his apparent smuggling of goods from France—with which it seems Ram helped. Both say they don’t do that anymore; that was their last time.

Dean’s wife, trying to find him, has learned from his secretary that the police interviewed him about Walsh. It’s not that, he tells her, they can’t trace us to that. He dismisses the interview as unassociated with him.

Later, she admits to him that she has (very rarely) been angry at their son Jack, who is running a temperature, for what his disability has done to their lives—Dean completely missed that his other son recently won a prize, and has apologized heartily and sincerely to him that Jack sometimes takes all their attention. She wants him to know that she can be an awful person, but he still loves her—and she will do the same, if he finally talks about his past and no longer keeps secrets. Like how he writes Mother’s Day cards to a mother he says is dead, or how he went to France even though they don’t do that anymore.

You’re tired, he replies, distressed. We will do this, but please, not now.

She’s not the only partner who wants to know more about the past. Geoff’s brother has told him about Fiona’s last-minute request to change her name on their mortgage documents due to a past criminal conviction. Fiona reveals that she killed a child in a car crash—the car seat was improperly fastened, and she was slightly speeding. She’s not even sure it was her fault. How could you not tell me this over seventeen years together, Geoff asks. Is there anything else? She says no. If we lose this deposit… Geoff says.

Cassie and John are buying a house. He has put together a list of possibilities, but she’s too busy to look right now. (Sunny has a similar problem—he misses helping move in to a home with his girlfriend Sal because of work, but she welcomes him and is excited nonetheless.) Cassie tells John she spoke to a lawyer about her dad’s will, despite her son telling her after his conversation with his grandfather to let it go. (Don’t come to me when you need money ten years from now, she replied.) John thinks a lawyer is a bad idea. Cassie halfheartedly agrees, but she can’t let go of her anger.

It stirs her decision to bring in Ram for questioning, despite Sunny’s reluctance given that their evidence against him is mainly that witnesses saw an Asian man at various incidents decades ago. They hear from the officer called to Walsh’s altercation at the pub that he made a pass at a woman and then racially abusive remarks, which led to a fight between him an Asian man. Both he and the woman were cops-in-training. The officer’s sergeant buried the charge, seemingly to protect the woman and the Asian man—the police had only just started recruiting minorities, and didn’t want a bad situation. Walsh was let off, and no one else’s name was recorded.

The detectives have located Walsh’s brother, Clive, who says he was with Walsh the night he disappeared. Clive was peeing in some bushes when a car stopped and an Asian man yelled at Walsh, then chased him. Another man from the car followed, then eventually another man, and finally two women. Clive left for a foreign job the next day, and didn’t realize Walsh was missing for a while, although he never saw him again. He didn’t tell anyone about that night because he was ashamed that he didn’t try to help his brother.

In his interview, Ram remembers leaving a party with Rob and Liz that night, but says he doesn’t recall Dean or Fiona, or an incident with Walsh. He tells Cassie and Sunny they have nothing on him, just white witnesses from decades ago saying they saw an Asian man in a place where he could have been. Cassie is furious; Sunny suggests they slow down in their investigation.

Later, Ram laments to his brother that everyone wants the police to be superheroes, but they’re just normal people who mess things up like everybody else. After Anna learns that their child will have Down syndrome, he has a change of heart on whether to keep the baby. What if something happens to me, he says. Can we just think about it a bit longer?

Liz has apparently made her own mistakes. Her mother’s caretaker, Eugenia, approaches her and asks again for a wage increase, so that she can pay her heating bill and occasionally buy her daughter a present. She regrets having to resort to blackmail, but she heard Cassie interviewing Liz; if Liz doesn’t pay her just a whit more, she will tell the police what Liz’s mother told her about Liz. You can have the money, Liz says.

It does seem that Liz has a secret. Fiona’s dangerous driving conviction is oddly scant in detail. (The police also struggle to find basic documents, such as a birth certificate, for Dean.) But once the report is dug up, it reveals that an officer smelled alcohol on Fiona’s breath after the death of the child in the car crash. She was too distraught to submit to a test then, but a blood test was taken at the station—and lost. Liz worked at that station at the time; two years earlier, she and Fiona were living at the same address. If the blood test had come back with alcohol in Fiona’s system, she would be in jail now.

Finally, Walsh’s cause of death may be identified. There’s a sharp object in his skull and brick dust around his head. Plant material on his clothes suggests he was in an allotment soon before his death. He may have tripped and hit his head on bricks, falling onto a metal spike. Or someone drove the spike through his head.