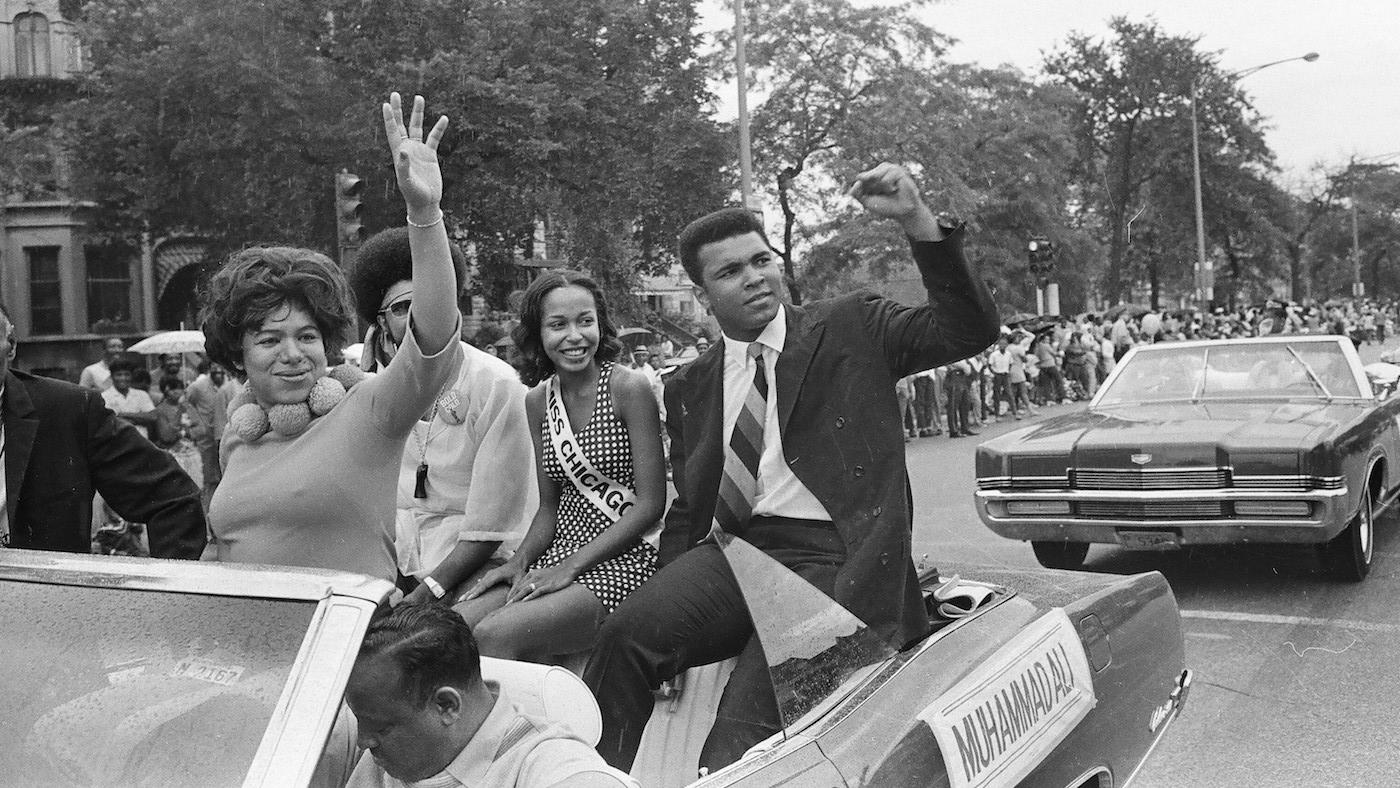 Muhammad Ali sitting in the back of a convertible waving to a crowd during the Bud Billiken Day Parade at 39th Street and Martin Luther King Drive, Chicago, Illinois on August 9, 1969. Photo: ST-40001287-0032, Chicago Sun-Times collection, Chicago History Museum

Among the many things for which Chicago is known, one that is often overlooked is that the city is a boxing town. Three of the most famous world heavyweight champions—indeed, most famous athletes, full stop—lived here for important parts of their careers, while legions of amateur boxers have vigorously trained for and vied in the Golden Gloves tournament here over the past near-century.

Jack Johnson was the first iconic boxing champion to have a strong association with Chicago. He bought his mother a Victorian home at 3344 S. Wabash Avenue after easily defeating Tommy Burns to become the first Black heavyweight champion of the world in 1908 in Sydney. The police stopped the Burns-Johnson fight and its filming before Johnson finished the bout, lest the world see a Black man defeat a white man on film.

The fears proved warranted two years later, when a Johnson victory set off race riots across America. The undefeated former heavyweight champion Jim Jeffries—the “great white hope,” as he was dubbed—had come out of retirement to fight Johnson for the heavyweight title “for the sole purpose of proving that a white man is better than a Negro,” in his own words. The riots set off by Johnson’s triumph in the “battle of the century” led to a law banning the interstate shipment of fight films, in order to prevent more riots as Johnson defeated more white boxers.

Johnson returned to a jubilant crowd in Chicago—and a white man who tried to break into his home and kill him. On top of the world, Johnson opened a nightclub called the Café de Champion in Chicago in 1912. It was one of the few places in the city where Black and white people could gather together after dark.

The Everleigh Club was different. A high-class brothel, it had only white employees and allowed only white customers. But Johnson found his way in, inviting some of its employees to a hotel; all of the women who joined him were fired. One was named Belle Schreiber, and she would eventually help send Johnson to prison.

Johnson’s penchant for traveling and living openly with white women—he married two—infuriated white supremacists, and even portions of Black America. With no white boxer able to beat Johnson in the ring, federal agents set out to take him down another way. Under the Mann Act, a progressive law meant to curtail prostitution and human trafficking, Johnson was prosecuted twice for transporting a white woman across state lines for “immoral purposes.”

The first attempt failed when the woman, his eventual wife, refused to cooperate. But Schreiber testified against Johnson in a second court case, and he was locked in the Cook County Jail by Judge Kenesaw Mountain Landis, who later became the first commissioner of major league baseball and is believed to have opposed the sport’s integration. An all-white jury later found Johnson guilty, even though the Mann Act had been passed after the alleged actions, and was not meant to be used in instances of consenting adults.

Johnson managed to escape to Canada before going to prison, possibly with the help of Rube Foster, the pitcher/manager of the Chicago American Giants and later founder of baseball’s Negro Leagues. He later turned himself in after years of living abroad.

After his death in a car crash in 1946, Johnson was buried in Chicago’s Graceland Cemetery following a widely attended funeral at Pilgrim Baptist Church. He was pardoned in 2018 by President Donald Trump. 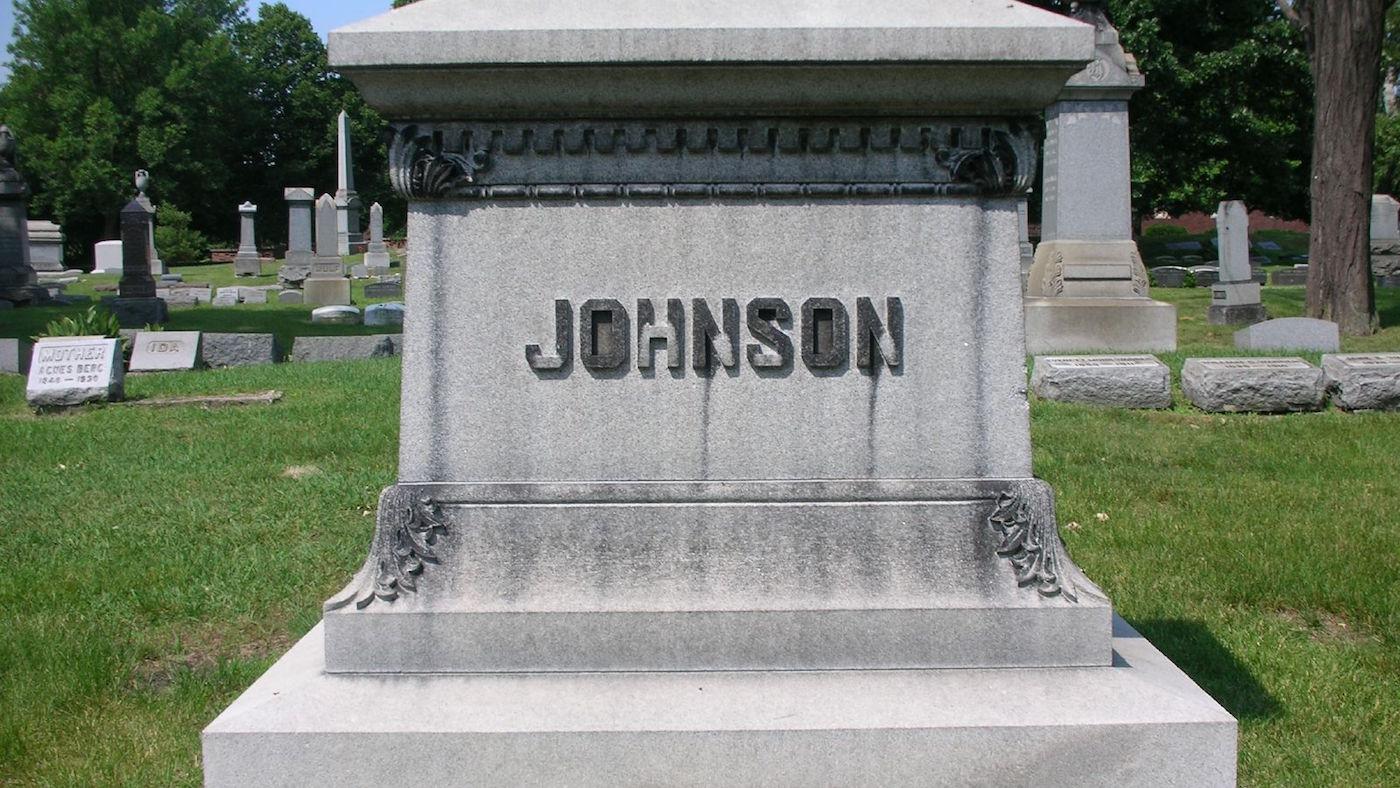 The next Black world heavyweight champion was the anti-Jack Johnson, his reputation carefully cultivated by his managers to contrast with the brash and confrontational Johnson’s. Joe Louis wasn’t allowed to enter nightclubs alone, to be photographed with a white woman, or gloat when he defeated an opponent. Johnson’s offer to train Louis was rejected.

Louis won the world heavyweight title by defeating James J. Braddock in 1937 at Comiskey Park, and eventually lived in Chicago. He had first broken onto the scene via the amateur Golden Gloves, winning the prestigious Chicago tournament in 1934.

The Golden Gloves began in the 1920s in Chicago under the sponsorship of the Chicago Tribune. An amateur tournament that still exists today, it was meant to teach discipline to the young men of Chicago’s neighborhoods and provide a constructive path off the streets. While the tournaments take place in numerous cities, Chicago was the first, and along with New York City, is the top tier. The former Illinois attorney general Jim Ryan partook in the Chicago Golden Gloves, as did numerous Olympians, the West Side champion Ernie Terrell, and two other world heavyweight champions: Sonny Liston, and the man who defeated him for the title—Muhammad Ali.

Ali was the third world-famous boxer to have pivotal experiences—and live—in Chicago. Much closer in temperament and reputation to Johnson than Louis—“I grew to love the Jack Johnson image,” he would say—he first began attracting notice in three consecutive Golden Gloves tournaments in the city. It was in Chicago that he first encountered the Nation of Islam, which he would later join.

Ali met and lived with several of his wives in Chicago (and claims to have lost his virginity here, too), and built an extravagant house and funded the construction of a mosque in Kenwood. The city was also where he first ran into professional problems because of his refusal to join the military: a scheduled fight with Terrell in 1966 was canceled by the Illinois State Athletic Commission.

Banned from the sport, Ali didn’t fight for several years after he was drafted, and was stripped of his boxing titles. He did eventually win his case before the Supreme Court, unlike Johnson, who never even got to the highest court and instead served time. But the parallels between the two extraordinary boxers still extended beyond just their association with Chicago. After watching the Broadway play The Great White Hope, which was based on Johnson’s life, Ali told its starring actor James Earl Jones, “That’s my story.”