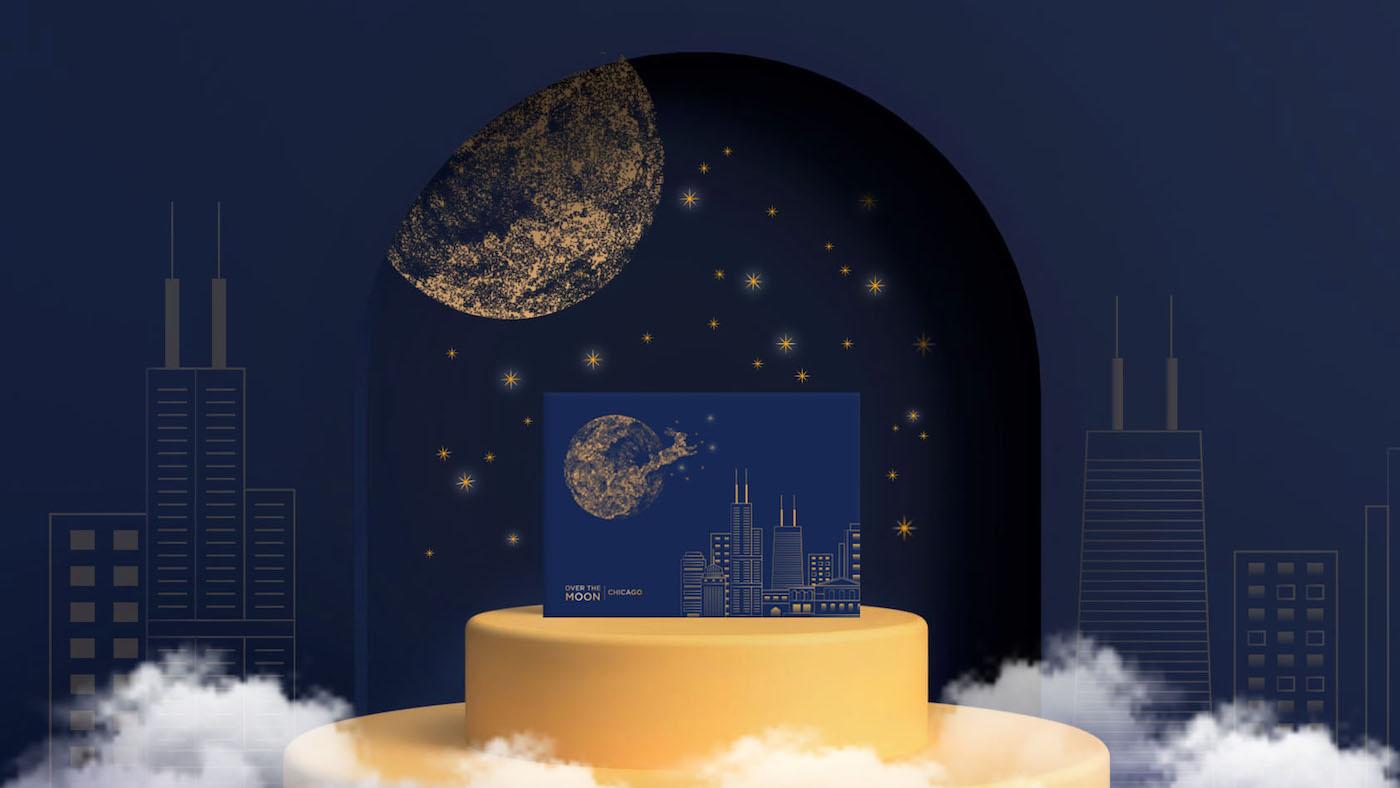 Every year around the beginning of fall, Anna Desai’s father sends her a box of his homemade mooncakes. His grandfather was a baker in Vietnam, so he and his brothers learned to bake before they knew how to cook. After immigrating to St. Louis and opening a Chinese carryout restaurant, he started making the mooncakes for his friends and family, always ensuring that Desai received some in the mail even after she moved to Chicago for college.

He makes the round pastries in celebration of the Mid-Autumn or Moon Festival, one of the most important holidays in East and Southeast Asia. “It’s like Thanksgiving,” Desai says. “It’s a time for families and friends to come together. Traditionally, it was to celebrate the harvest of the season.” Occurring on a full moon, it has become so strongly associated with mooncakes over the centuries that it’s now sometimes called the Mooncake Festival.

Despite the importance of the Mid-Autumn Festival and the size of Chicagoland’s Asian population, there are surprisingly few establishments in the area that make their own mooncakes. So Desai has organized Over the Moon – Chicago, a collection of mooncakes made by twelve local Asian American bakers that is available to order via Tock beginning Thursday, September 2 at 11:00 am. Pick-up will be on September 18 at Side Practice Coffee, 5139 N. Damen Avenue. (Ten percent of total sales will go to the Chinatown-based youth support nonprofit Project: Vision.)

“I was downstairs in my parents’ basement recently and I found a whole bunch of my dad’s wooden mooncake molds,” Desai recalls of the origin of the project. “His mooncakes are fairly traditional: he’ll use lotus paste or a salted egg yolk—when you crosscut it, it looks like a yellow circle that’s supposed to symbolize the full moon—and he’s also made mooncakes with different types of nuts.” These standard fillings are typically surrounded by a pastry crust that is imprinted with Chinese characters or designs.

“I usually like more modern types of flavors, and I found that a lot of mooncakes in those different varieties are found in Singapore or Malaysia, but they’re not readily available here in Chicago,” Desai continues.

The bakers she has assembled are indulging her taste for innovation. Jasmine Sheth of the virtual restaurant Tasting India will contribute a South Asian spin on the mooncake, flavoring it with saffron, jaggery, and coconut. The Michelin-starred chef Mari Katsumura offers a twist on an American classic, blueberries and cream. Stellar Granola’s Chrissy Camba taps into the season with a coconut-caramel-pumpkin filling.

“I really wanted the bakers to have the freedom to do whatever type of mooncake speaks to them,” Desai says. “Some gravitated toward flavors that are their specialty, that they use with their own types of pastry”—like the maker of Filipino desserts Eina Kathlyn Malunay’s ube mooncake—“and some of them really had ties to their own story,” for instance Bliss Point Bakery’s Mimi Chonnipa, who will fold her Thai, American, and Chinese heritages into a single pastry flavored with Thai tea custard and a cheesy salted egg yolk.

The one standard classic included in Over the Moon is a baby lotus mooncake from Pui Yup Chiu of Chinatown’s Chiu Quon Bakery, Chicago’s oldest Chinese bakery. “He makes a couple varieties at the bakery year-round,” says Desai. “He’s really the OG in Chicago.”

Chiu (along with Camba, Katsumura, and a couple of the other bakers) also took part in the project that inspired Over the Moon: With Warm Welcome’s Bakers Box, an ongoing national series that spotlights Asian American bakers in different cities and was curated in Chicago by Desai. “I know a lot of these bakers have had to pivot over the last year and a half, and I think a lot of them haven’t necessarily received the recognition that they should,” Desai says. “I wanted to find a medium to bring everyone together, to amplify their stories and their voices, and then also introduce holiday traditions to a new audience.”

Those holiday traditions and stories are also subtly present in the packaging of Over the Moon, which was designed by the Brooklyn-based artist Cindy Tan. In Chinese folklore, a rabbit lives on the moon as a companion of the moon goddess Chang’e (recent Chinese space missions have been named after Chang’e and the rabbit); the Over the Moon box features a rabbit leaping out of the moon over Chicago’s skyline. In addition to Tan’s work, the box will also feature illustrations of the mooncakes by the Chicago artist Tony Moy, while Tin Nguyen and Stella Marie Fanega will take video and photos of the boxes and their packing and pick-up.

“It’s rare to showcase a baker alongside artwork like Tony Moy’s,” says Desai, who wanted to highlight Asian American visual artists in addition to bakers. That ethos of promoting creative work is shared with Side Practice Coffee, the pick-up location. In addition to being a coffee shop, “they promote local vendors and local creatives, and I just love that,” says Desai. “A lot of their vendors might be people who have nine-to-five jobs, but they enjoy baking on the side, and Side Practice tries to celebrate that.”

In a different life, Desai’s father might have been one of those people selling pastries out of a place like Side Practice. “He is a very, very good cook, but I think baking is really his passion,” says Desai. “I think it was his dream to open a bakery with all of his brothers, but that just didn’t come to fruition. I think he’s going to be really curious to see how [the Over the Moon bakers] make their mooncakes, because he loves to educate himself on different ways to make food, and then try to incorporate that when he experiments in the kitchen. He is definitely a lifelong student when it comes to food.”

Maybe next Mid-Autumn Festival when he bakes his mooncakes and sends them to Desai, some of them might be filled with ube or saffron or some other exciting new flavor.