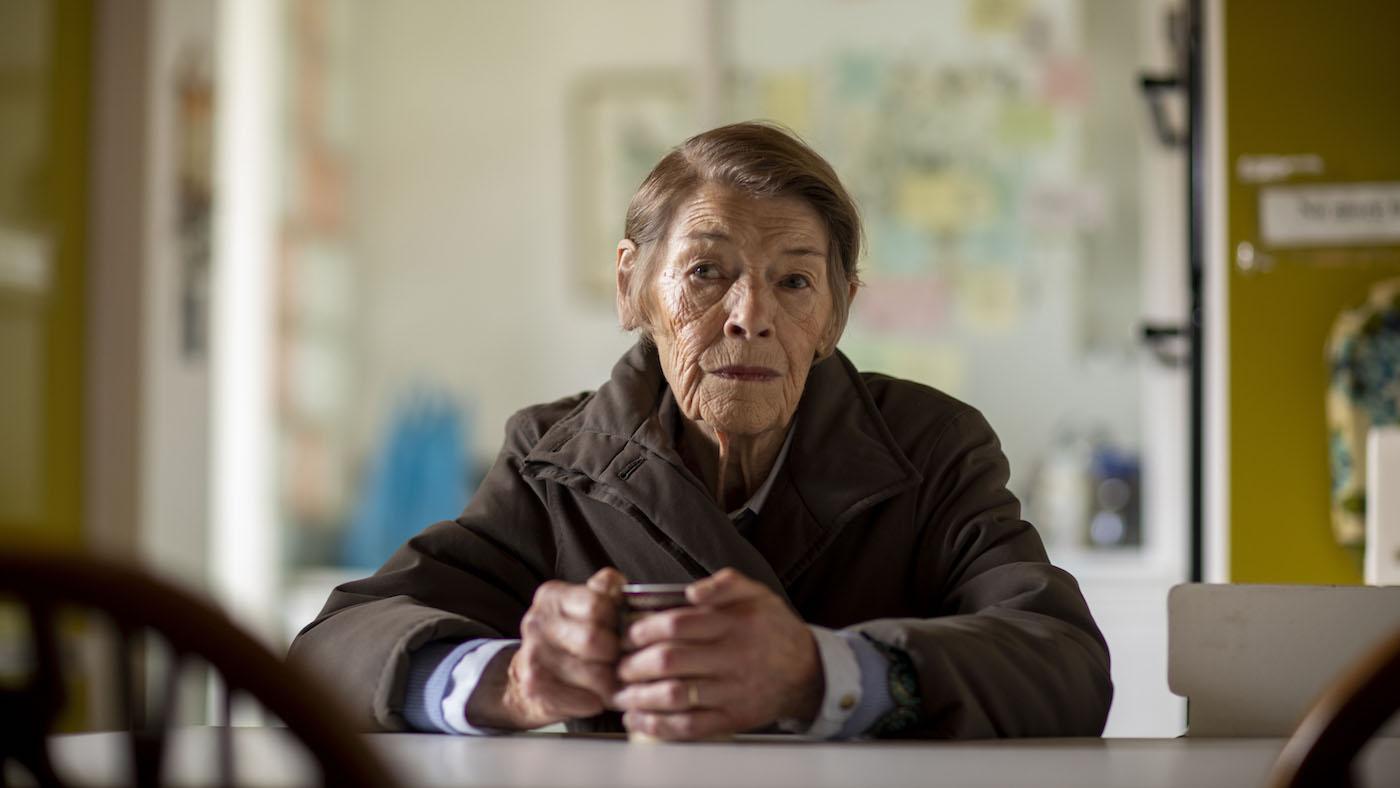 Maud fears her friend Elizabeth has disappeared, just like her sister Sukey did decades ago, but her dementia complicates her investigation. Photo: STV Productions

Elizabeth is Missing is available to stream for a limited time.

Maud’s memory may be slipping enough that she requires notes throughout her house—don’t forget to lock up, Elizabeth’s house for gardening today—but she at least has a caring if put-upon daughter, Helen, who visits her daily, unlike her friend Elizabeth. As Elizabeth complains while she and Maud garden, her son Peter barely speaks with her and may be stealing from her as well.

But when Elizabeth fails to meet Maud outside the Salvation Army where they first met, it’s uncertain if Maud got the day wrong. She visits Elizabeth’s house and finds the garden in disarray and a footstep in the mud matching her own—which she obscures. Through the blinds, she sees Elizabeth’s glasses on the table. A woman was recently attacked in the area, and Maud begins to worry that Elizabeth is in trouble.

Maud tries to reconstruct a narrative via the notes she scribbles throughout her day. Her granddaughter Katy suggests dating the notes from now on, even though her mother Helen disapproves of indulging Maud in her worry.

It doesn’t help that Maud’s foggy recent memories are infiltrated by ancient ones of another person she lost: her beloved older sister Sukey. When Maud was young, Sukey went missing soon before she and her husband Frank were due to move into a new home—the one where Elizabeth now lives. Sukey’s packed suitcase was found on a railroad line. Frank was in London at the time and suspected Maud’s parent’s lodger, Doug, of foul play. A mad woman who lost a daughter in the Blitz continually spouted nonsense about Sukey after her disappearance.

Again searching for clues of Elizabeth, Maud notices a broken vase in Elizabeth’s house. She is able to access Elizabeth’s spare key by using her notes to recall Elizabeth’s birth year—the lockbox code. No one is inside the house. Maud reports Elizabeth’s disappearance to the police—forgetting that she has already done so.

Maud is becoming more forgetful. After she calls the doctor some twelve times in a month, he checks on her and asks her a series of questions, then has a serious conversation with Helen. Maud fears being put into a home, but living alone is beginning to be untenable: she recently tripped and badly bruised her arm. Caving to Maud’s concern for Elizabeth, Helen tries calling Elizabeth’s son Peter, and leaves a message.

A turning point comes when Helen finds Maud soaking in the tub in her clothes with mud streaks throughout the house. Reliving a memory of finding a smashed record of Sukey’s favorite record in the garden—Doug was the only one with a record player—Maud went digging in her own garden in the rain. Helen tearfully locks Maud in her own home; Maud throws away all of her reminder notes. Later, Helen has her brother Tom, whom Maud adores, break the news to Maud that she has to move in with Helen. 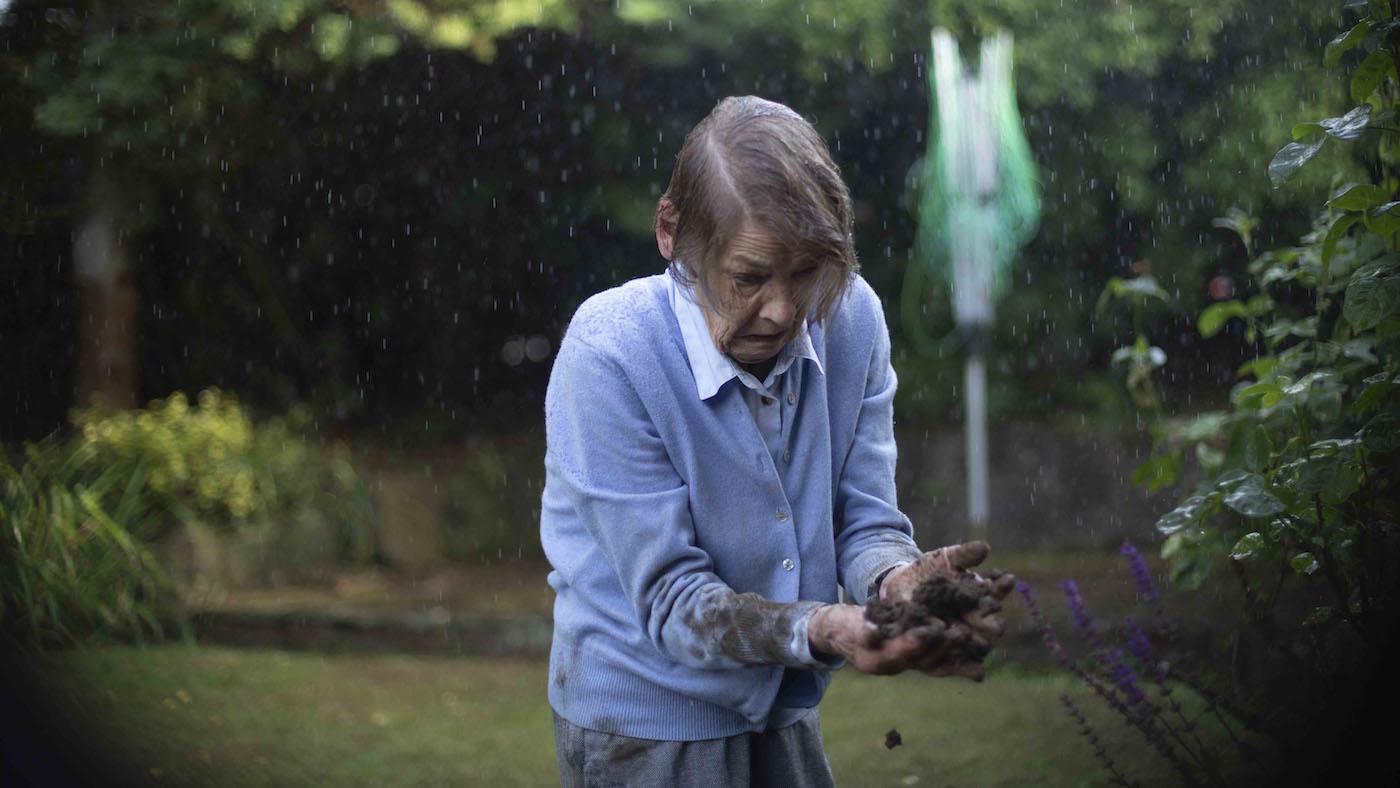 When Maud digs frantically in her garden in the rain, her daughter Helen decides she can no longer live alone. Photo: STV Productions/Mark Mainz

Before Maud moves out, she calls Peter in the middle of the night. He’s annoyed and cagey about answering her questions about Elizabeth.

As Helen packs up Maud’s house, Maud is overtaken by a memory. She runs down the street, following a Doug of decades past. The young Maud had found a note from Sukey to Doug but was unable to read it, having dropped it in a pot of soup when Doug suddenly appeared. Maud suspects Doug of bringing food to someone—is it Sukey?

Following him, young Maud discovers that Doug was leaving food for the mad woman. Both Doug and Maud are surprised to find Sukey’s comb in the mad woman’s shack. Later, he admits that he and Sukey often talked, but there was nothing more between them. Sukey wanted to have the mad woman institutionalized, because she often looked in on Sukey’s home, but Doug disagreed.

Back in the present day, Helen finds a distressed Maud knocking at Elizabeth’s door and brings her home.

After moving in with Helen, Maud puts a missing persons ad in the paper for Elizabeth. Peter comes to Helen’s home and furiously threatens everyone, accusing Maud of harassment. Maud in turn threatens Helen and Katy later: confused about where she is and who they are, she hits at them, telling them to leave her house.

Soon, Maud forgets who Helen is when Helen finds her at a bus stop. The experience devastates both women. Worse is when Maud calls Katy lazy, thinking she is hired help. Helen yells at Maud for insulting her daughter; once again, Maud realizes her lapse and is utterly embarrassed and sad.

Young Maud also experienced familial antagonism, in the form of Frank. Her father didn’t like Frank. When Frank learned Maud had a note from Sukey to Doug, he nearly pushed her down the stairs trying to get it from her. Maud also witnessed Frank come home drunk and act aggressively towards Sukey. After Sukey disappeared, Maud found half a compact and bits of smashed glass in Frank and Sukey’s fireplace.

As Maud descends further into dementia—and the past—a moment of clarity finally comes. A memory of the last time she saw Sukey had driven her to Elizabeth’s house on the day she last saw Elizabeth. Maud dug in Elizabeth’s garden in the night; when Elizabeth saw and tried to help, she either slipped and fell or was hit by Maud—we’ll never know which, although Helen believes Peter neglected the safety of his mother by allowing her to work in an unsafe garden.

Maud asks to visit Elizabeth in the hospital, and Helen and Peter reluctantly agree. After tenderly combing Elizabeth’s hair, Maud begins insisting she’s in the garden. Helen decides to take her seriously, realizing she was never talking about Elizabeth, and returns with Maud to Elizabeth’s garden. Helen begins digging.

She eventually finds a shoe buckle, the other half of the compact, a glass shard—and a skull. Maud—and the police—finally piece it together. The mad woman, who often looked in at Sukey and Frank in their home, was telling the truth about Sukey, albeit in odd form. Frank came home drunk and accused Sukey of cheating on him with Doug. She packed a suitcase to leave him. He shoved her into the mantelpiece, and a glass case shattered on her head. Frank buried Sukey in the garden where their new house was being built—the house that Elizabeth later lived in.

That mystery put to bed, Elizabeth too goes to her rest. Maud attends the funeral with Helen. Maud believes she’s at a wedding.