The Stars Celebrating the Kennedy Center's 50th Anniversary on PBS 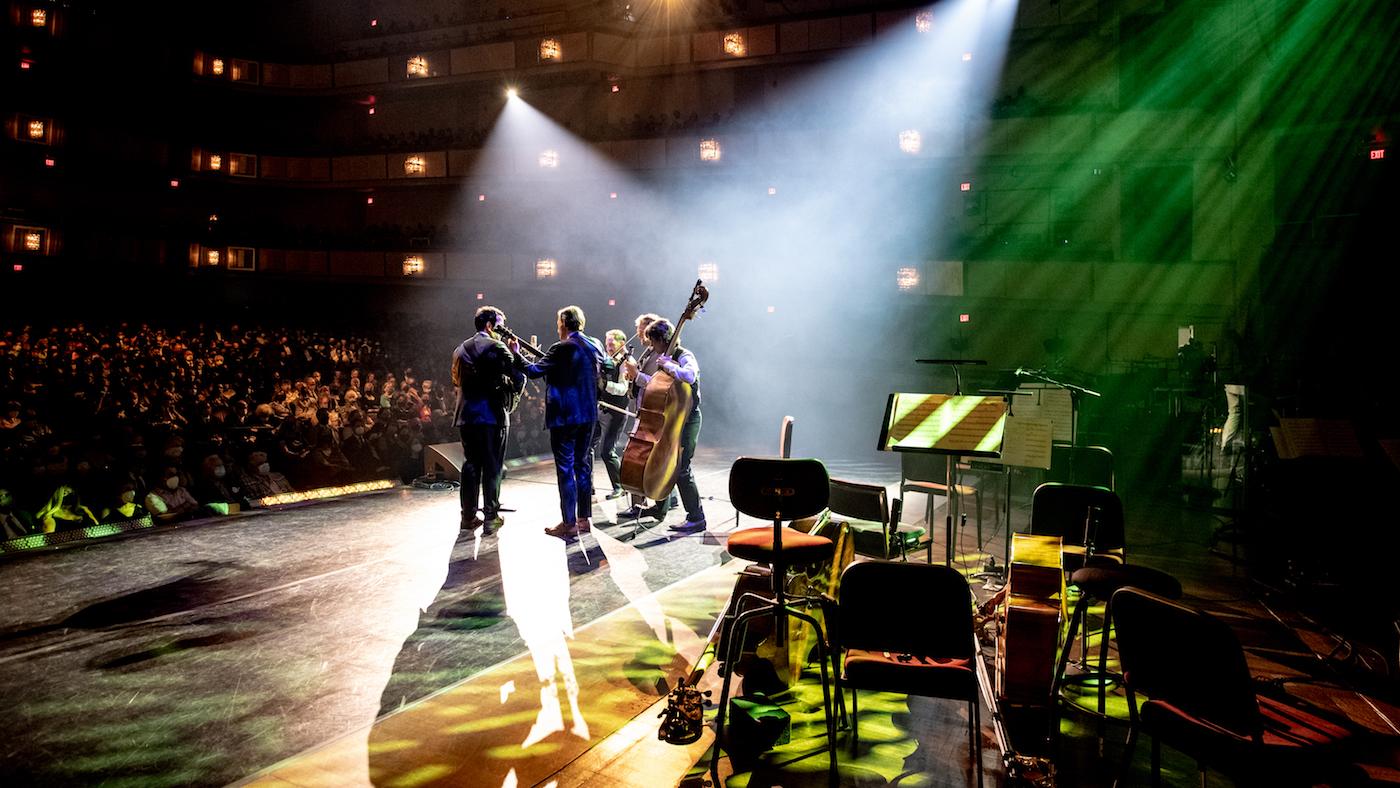 Fifty years ago, what was then the National Cultural Center in Washington, D.C. inaugurated its opening with a performance of Leonard Bernstein's Mass. (You can stream the Chicago Symphony Orchestra performing the Mass at the Ravinia Festival under Bernstein protégé Marin Alsop via Great Performances.) A year later, Bernstein himself led a star-studded gala performance billed as An American Pageant of the Arts to raise money for the Center. Everyone from Danny Kaye to Maria Tallchief to Marian Anderson to a very young Yo-Yo Ma took part in a televised concert that was graced by Presidents Dwight D. Eisenhower and John F. Kennedy. After Kennedy was assassinated the next year, the Center was renamed the John F. Kennedy Memorial Center for the Performing Arts in his honor.

Now, in a celebration of the fiftieth anniversary of the Kennedy Center, WTTW and PBS are airing a concert echoing that American Pageant of the Arts. Hosted by multiple Tony Award-winner Audra McDonald and directed and choreographed by Emmy Award-winner Joshua Bergasse, the concert took place on September 14 and will air October 1 at 9:00 pm. The National Symphony Orchestra—which was part of the original American Pageant—accompanies artists from across genres under the batons of accomplished conductors JoAnn Falletta, Steven Reinecke, and Thomas Wilkins. Meet the rest of the performers here.

Acevedo is a popular young Dominican-American poet and author who has won a National Book Award and cracked the New York Times Bestseller list with her young adult novel The Poet X. 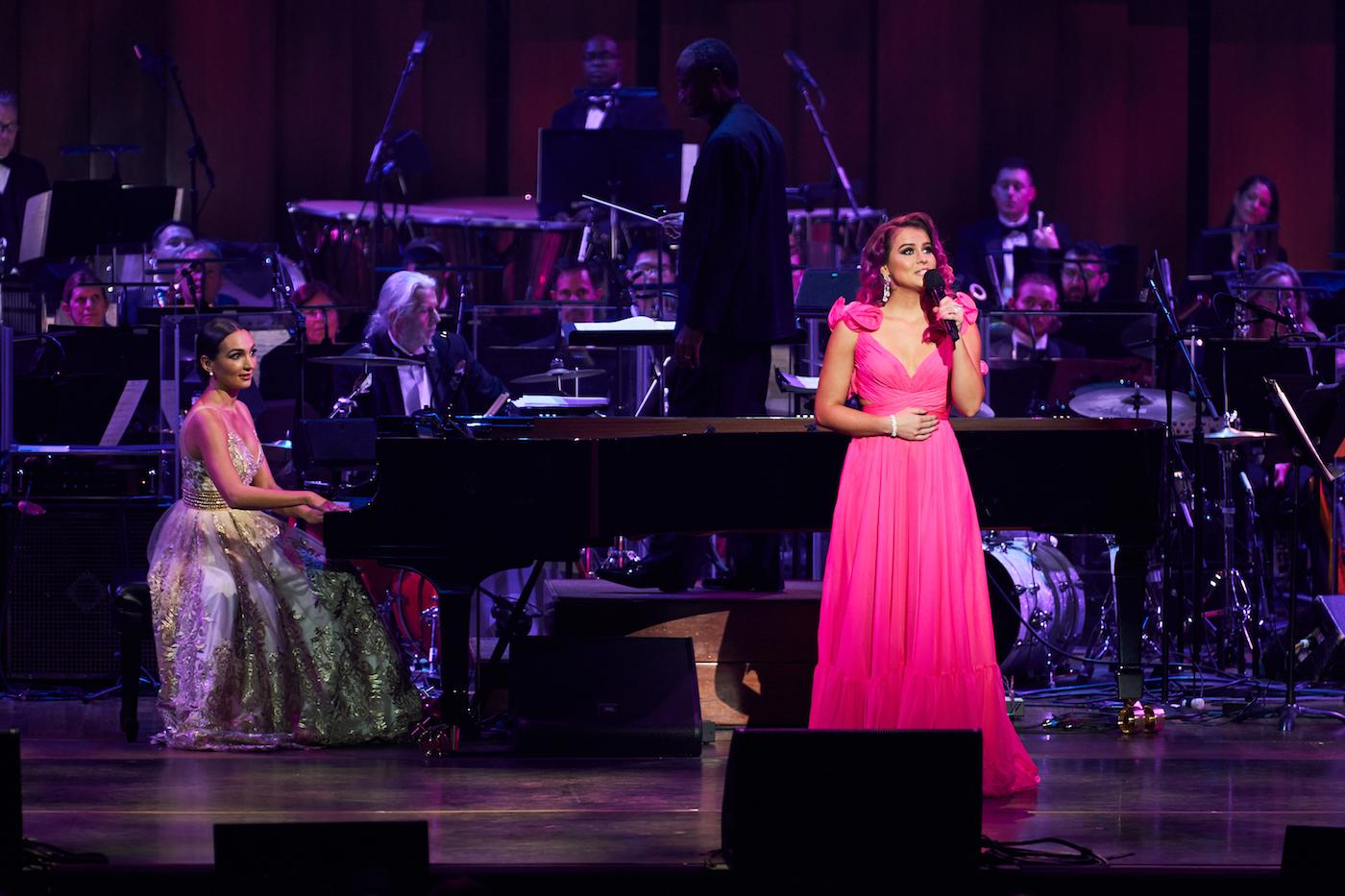 The twenty-year-old Bear, a Rockford native, debuted on piano at the Ravinia Festival at the age of five—the youngest performer to ever play there. She released a Quincy Jones-produced album in her early teens, and this year partnered with Barlow to write The Unofficial Bridgerton Musical, a series of songs based on the Netflix romance series Bridgerton that went viral on TikTok.

Barnes is a dancer, choreographer, and self-described "Tradition-bearer of Black American Social Dance" who covers everything from house music to the Lindy Hop.

Chen is a young Taiwanese-Australian violinist who has already recorded with such masters as Christoph Eschenbach, among others.

Criss first found fame with the parody A Very Potter Musical before starring on Glee and then moving into a successful Broadway, film, and television career, including in an acclaimed role as the serial killer Andrew Cunanan in The Assassination of Gianni Versace: American Crime Story. 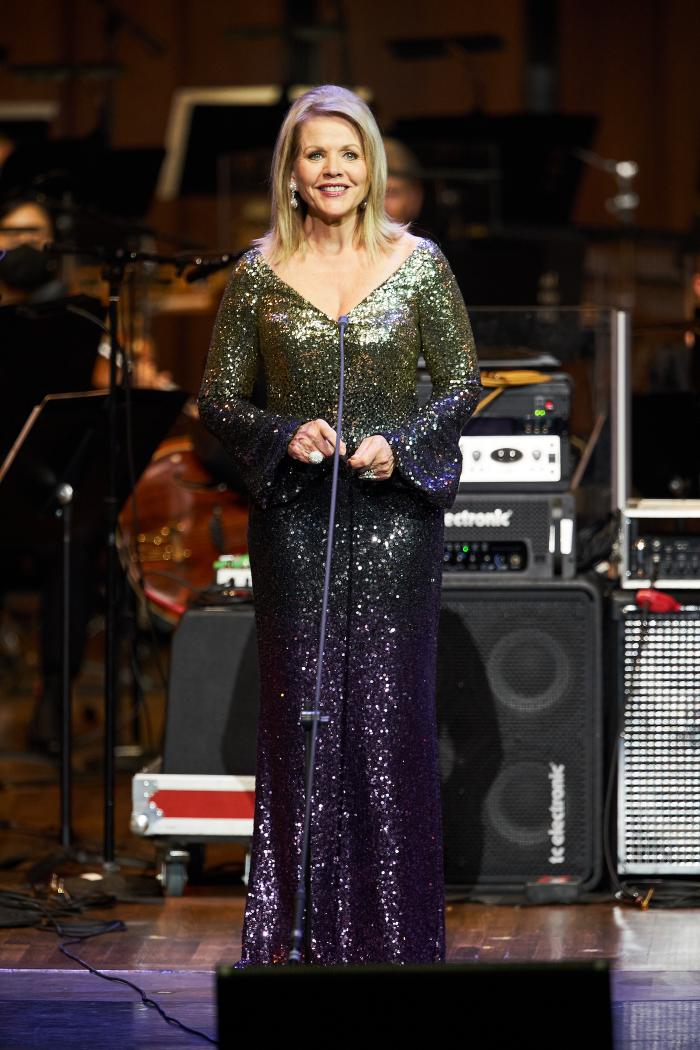 Glasper is a pianist who came up in jazz but has long incorporated hip-hop, rap, and other genres, collaborating with Kendrick Lamar, Common, Erykah Badu, and many more artists.

Goosby is an up-and-coming violinist still in his mid-20s who released an album with pianist Wang this year that focuses on African American composers, mainly in the classical tradition.

Hwang is a celebrated playwright; Tesori an in-demand composer for the stage. The original cast of their musical Soft Power, which imagines looking at America through the lens of a future Chinese musical, perform for the Kennedy Center anniversary concert.

Henry is an actor whom Chicago audiences may have seen: he played Aaron Burr in the Chicago production of Hamilton.

A blues musician who preserves and updates the genre, Keb' Mo' has won multiple Grammy Awards.

Blues Hall of Famer LaVette has had a long and often undersung career as a soul singer and songwriter who finally began to gain widespread critical acclaim in the 2000s. 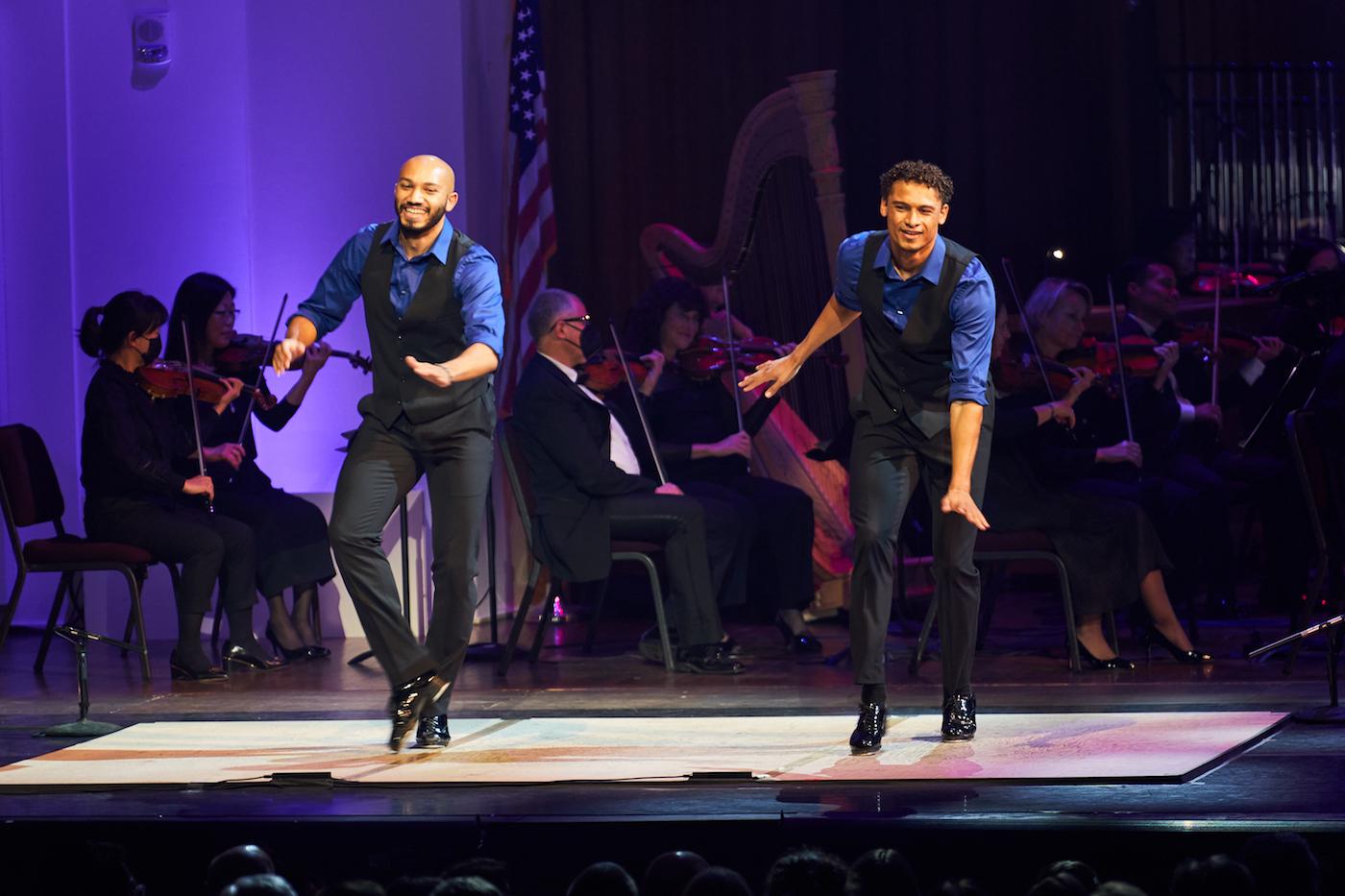 John Manzari and Leo Manzari tapping to “It Don’t Mean a Thing (If it Ain’t Got That Swing)” by Duke Ellington and Irving Mills. Photo: Scott Suchman

The Manzari brothers have been taken up by legendary tap dancer Maurice Hines, and have been featured on So You Think You Can Dance.

Jazz bassist McBride has played with legions of jazz greats as well as stars outside his genre such as Paul McCartney, Celine Dion, James Brown, and more. Plus, he's won many Grammy Awards.

Guatemalan singer-songwriter and guitarist Moreno sings in four different languages and has won a Latin Grammy.

Broadway star O'Hara has a Tony Award for Best Actress in a Musical and has also appeared in TV shows like Masters of Sex and 13 Reasons Why as well as at The Metropolitan Opera.

The lead singer of the inventive band Lake Street Dive, Price crosses genres in her music.

Speaking of cross-genre: The Punch Brothers, led by virtuoso mandolinist Chris Thile, are nominally a bluegrass quintet, but incorporate everything from classical to jazz to rock into their ambitious music. 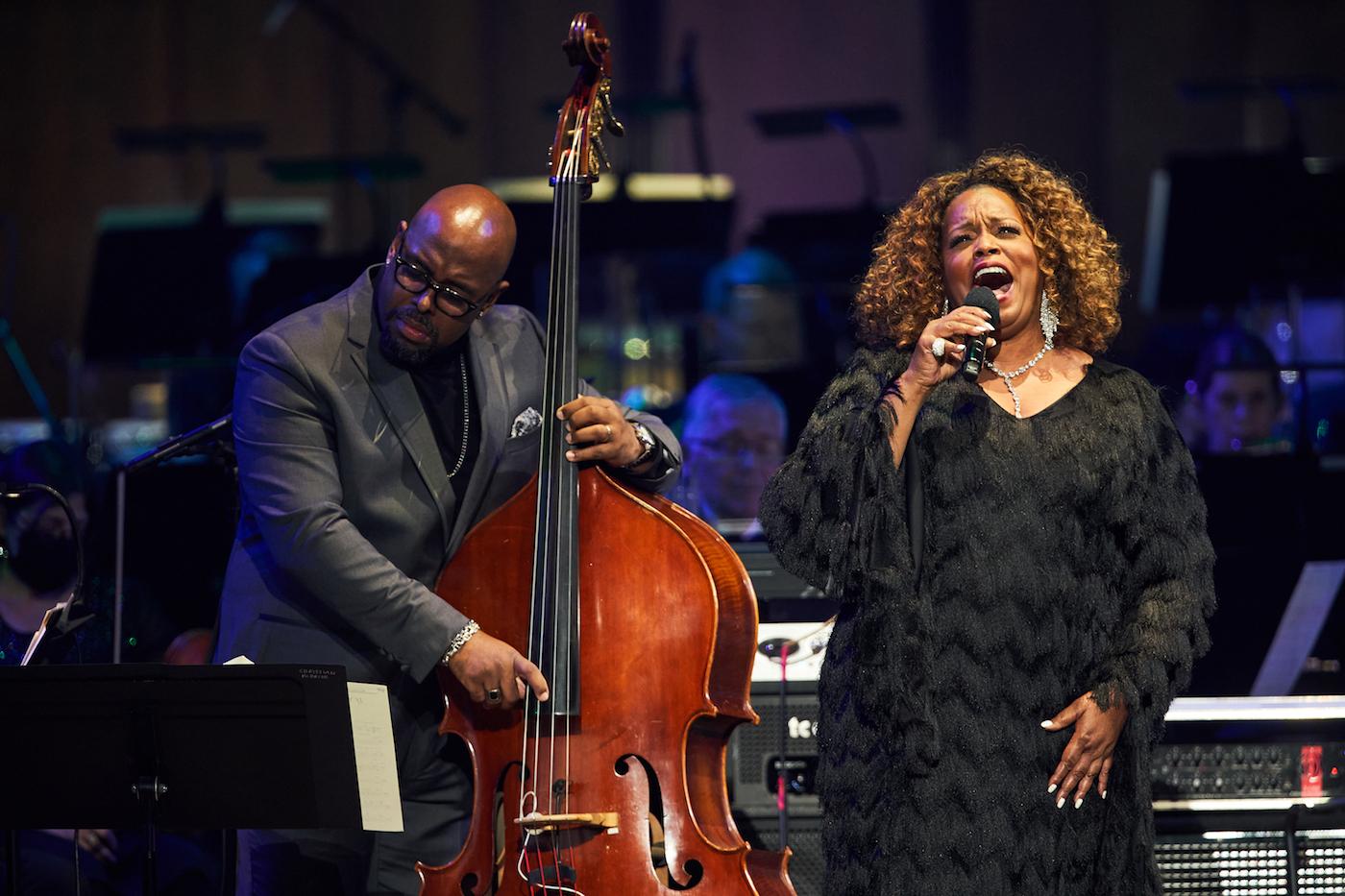 Christian McBride and Dianne Reeves perform “It Don’t Mean a Thing (If it Ain’t Got That Swing)” by Duke Ellington and Irving Mills. Photo: Scott Suchman

Grammy Award-winning jazz singer Reeves has performed and recorded with some jazz greats, including Herbie Hancock, Freddie Hubbard, and Tony Williams, on her debut album.

Tran starred in the second two films of the new trilogy of Star Wars films, and voiced Raya in the animated Disney film Raya and the Last Dragon.

Trenary and Cornejo are principal dancers in the storied company American Ballet Theatre.

Willems is a beloved children's book author who has also worked on Sesame Street, while Folds is a pianist, singer, and songwriter. Both are associated with the Kennedy Center, and are brought together for a world premiere collaboration here.

Yazbeck is another Broadway star who is particularly known for appearing in Bernstein's On the Town, Finding Neverland, and other musicals.