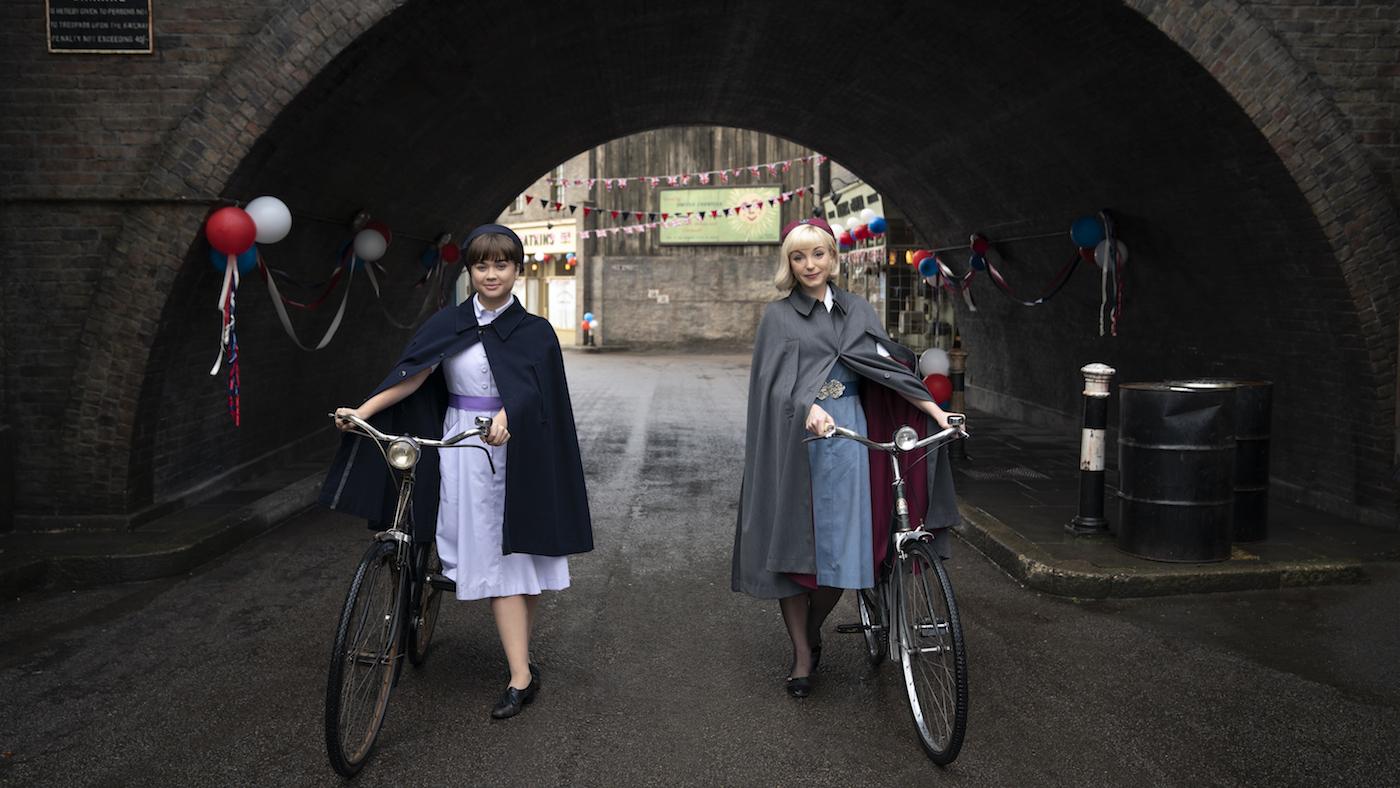 World Cup fever has overtaken Poplar. The Buckle general store has its best day of sales yet as England enters the quarterfinals, and Fred has secretly made some meticulously chosen bets—including on Germany to beat England in the finals. Even the midwives are taking part in a sweepstakes based on what country will take home the trophy.

Cyril has won his own prize, for scoring well on a civil engineering exam. One opportunity has presented itself for him to use the award money: his boss is opening a new garage and wants Cyril to be a partner. But Cyril would have to buy in, which would also require taking out a small loan—and he doesn’t want to be in debt. Instead, he buys a fancy record player, to Lucille’s disappointment.

There’s also reason for celebration at the Leeks home: their only son, Michael, is coming home for a visit from his job as a bellboy at a posh London hotel. Unfortunately, he ends up bedridden with an infected cyst at the base of his spine and is unable to return immediately to work. Dr. Turner sends him to a hospital for surgery.

At the hospital, it is discovered that Michael has genital warts, including around his anus, suggesting that he’s a homosexual. Nurse Crane and Dr. Turner delicately broach the subject with him and refer him to a clinic for treatment of the venereal disease. Michael is ashamed of being gay, especially since homosexuality is criminalized in England, but Dr. Turner defends him and tells him the law needs to change; there’s nothing wrong with him.

Upon discovering that Michael works as a prostitute at the hotel, Nurse Crane warns him that he’s putting himself in danger and recommends that he leave his job there. He objects, saying that his parents are proud of him for escaping the East End and working around the rich and famous.

The Turners know something about being proud of their children: Tim has decided he wants to go to medical school, and he has the grades and work ethic to do it.

The Leeks are aghast when Michael tells them he won’t be returning to the hotel. They guess that he has gotten a girl pregnant, but he uses the chance to say that he will never be in that kind of trouble: he’s gay. His parents are devastated, to the point that he has to lock himself in his room to escape his mother’s wailing.

The next day, he sneaks out in the early morning and leaves his parents a note. They call Nurse Crane for help, and Michael’s mother explains that she blames herself for her son’s homosexuality. She has considered suicide for what she considers her failure. Michael’s note apologizes for the way he is, and asks them to remember him as the son they thought they had.

Matthew Aylward must remember not his son but his wife, Fiona, who died of leukemia shortly after giving birth to their son Jonathan. Matthew finally feels strong enough to christen Jonathan, and invites Trixie to the rite. Afterwards, she and he chat in the nursery, and he reveals that he has yet to open the letter Fiona wrote him with Trixie’s help. She, meanwhile, offers baby advice.

Trixie is also helping a young midwife, Nancy Corrigan, one of four midwives training at Nonnatus as part of a new scheme to raise funds for the clinic. Nancy was brought up by Catholic sisters in her native Ireland after her mother died when Nancy was around seven years old. The sisters love her dearly but are also eager to deposit her at Nonnatus.

Trixie gets a sense of why when she goes on rounds with Nancy: she’s always rushing onward, and accidentally frightens a nervous mother away from a home birth by chatting too much. Shelagh later chides her for losing a patient, but Trixie defends her.

Nevertheless, Beryl Greaney ends up at Nonnatus for her birth. Her labor begins during the World Cup final, and her husband won’t tear himself away from the England-Germany game to bring her to the hospital. When the game goes into extra time, she sets off to find a cab, but the streets are quiet, so she makes her way to Nonnatus, where the only active midwife is Nancy.

Nancy bustles Sister Monica Joan out of her bed to put Beryl there, and is aided through the birth by Monica Joan’s advice. After the birth, Sister Frances finds Monica Joan marveling at the placenta: the “miracle of God Himself, his handiwork, his love.” Sister Monica Joan has found her faith again by observing birth, her life’s work.

The life’s work of Dr. Turner and Nurse Crane is treating people, so they are eager to help find Michael Leeks. Among the possessions sent to his parents from the hotel is a business card that he labeled “queer doctor.” Nurse Crane and Miss Higgins investigate, and discover that the doctor is a licensed psychiatrist who nonetheless offers conversion therapy.

Dr. Turner is furious. He and Nurse Crane visit the clinic and demand to see Michael, despite an agreement he signed upon admittance, in order to treat his cyst wound. Only after threatening an inquest are they allowed in to Michael’s room, where he is lying in a bed, vomiting because of medicine. “I don’t want this,” he tells Crane and Turner.

Back at home, Michael’s father tells him he is proud of him for telling his parents the truth about himself, among other things. His mother tells him that his happiness is the most important thing; that’s all that matters to her.

Cyril makes the ultimate gesture to tell Lucille the same thing when she arrives at his apartment with a record as a gift. He has sold his record player—in order to buy an engagement ring. I shouldn’t have made a big decision without consulting you first, he says about buying the record player, before proposing. Lucille accepts.

And the World Cup? England wins.