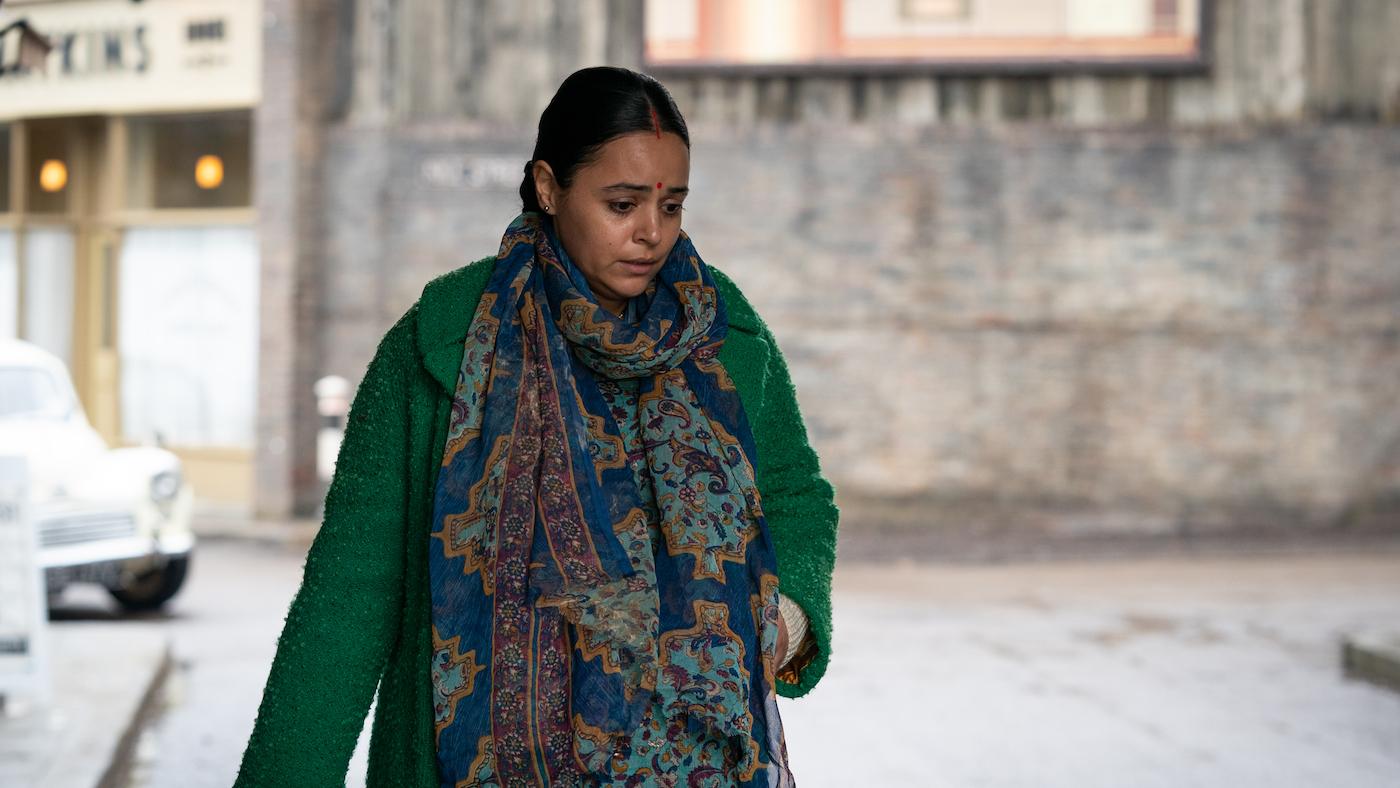 There’s an emergency: a mother has given birth to a girl without the aid of midwives, but she won’t stop bleeding. A neighbor calls Nonnatus, and Lucille and Sister Frances rush over, sending Manju, the mother, to the hospital. Some of the placenta remains inside her womb.

The Nonnatans have found that South Asian women like Manju often do not call the midwives for help, whether as a result of not speaking English, cultural norms, or other factors. Sarita Gupta, who lives in the same building as Manju, is also reluctant to receive medical attention despite her husband Raj’s pleas. He has heard that the midwives saved Manju’s life, but that doesn’t convince Sarita.

So he visits Nonnatus, introducing himself to Phyllis. She suggests that Sarita attend a new class that Sister Frances has suggested holding for the South Asian women of the neighborhood, to encourage mutual learning on the part of the women and midwives and help the nurses better serve the women. Raj says the invitation would be better coming from Phyllis herself, so she visits the nervous Sarita at home. Sarita barely speaks, but says she will come to the meeting, and is relieved when Phyllis leaves.

Sister Julienne has agreed to Sister Frances’s class idea, but only if she can secure funding for it after a trial run. Miss Higgins lived in India as a child and still remembers some Punjabi, so she offers to translate pamphlets and to serve as a translator during the class, until they can find someone else. Sister Frances also goes to Violet for council funding, and is told to provide much more information than she had prepared.

Manju’s mother brings Indian desserts to the class in gratitude for the midwives’ care of her daughter. Not very many women show up, nor does Sarita.

She’s busy cleaning her apartment obsessively, the mixture of chemicals leading to a coughing fit. When she feels one day that the baby is too quiet, Raj finally convinces her to see Dr. Turner. Nothing is wrong with her or the baby, but Raj does coax her into revealing to the doctor the root of her fear and obsessive cleaning.

When Sarita was five years old, she and other Hindus were put on a train out of what became Pakistan in the Partition of India. Guards beat her mother on the packed train, then urinated on her and threw her off the train. Her aunt gave birth to a baby on the filthy floor of the train car; the baby died, and the experience has haunted Sarita ever since.

Dr. Turner tells Sarita that she has suffered trauma, and assures her that it’s not her fault. He will find her a psychiatrist, but her labor will come first. Offered a choice of where to give birth, she decides on the sanitized maternity home.

She also attends Sister Frances’s next class. Soon after, she goes into labor. Frances and Dr. Turner attend her labor while Raj waits anxiously. Everything goes smoothly, and she gives birth to a boy.

Cherry Watson is at the other end of her pregnancy; her husband doesn’t even know she’s pregnant yet. She already has four kids and lives in abject poverty, plus her husband just lost his job, but she had trouble with the pill and so has another child on the way. When her husband realizes, he yells at her. Don’t blame me, I’m doing my best, he says. This is your best? she asks, looking at their dingy home. He gets angry.

When Cherry next shows up at the maternity clinic, she has a black eye, cigarette burns, and a bad infection. Dr. Turner and Trixie try to get her to tell them everything, but she won’t discuss her home life. She does finally admit to trying to use a skewer to give herself an abortion—that’s how she got the infection. You can’t treat me for what’s really wrong, she tells them: the poverty, the terrible living quarters.

During a pupil midwife debriefing later, Nancy, who observed the appointment, asks Trixie about it. Abortion is illegal and so Cherry broke the law, but both Dr. Turner and Trixie were sympathetic and didn’t report it. Trixie defends Cherry, but Nancy gets upset and insists that everyone has to follow the law and leaves in a huff.

Trixie decides to write a letter in the newspaper in support of an abortion bill that is being debated. Dr. Turner is proud of her, but many other acquaintances are nervous and uncertain—especially the religious sisters and Nancy. Trixie asks Nancy if she can do anything to help with Nancy’s anger; Nancy says she’s not angry about the letter, and that Trixie can’t help.

Meanwhile, Trixie does her best to help Cherry, contacting social services to see if they can arrange better housing. But that’s as much as she can do; other decisions have to be made by Cherry, who says that her husband loves her and isn’t a bad man. He’s just lost.

The BBC invites Trixie to debate the abortion bill on the radio, and Mother Mildred reluctantly grants permission. Sister Julienne tells Trixie that she envies her for not having to resolve a conflict between religious belief and her duty to help the women of Poplar; for Sister Julienne, her faith will always win out, but she does not begrudge Trixie. It also helps that Matthew Aylward has donated a substantial sum to Nonnatus House because of their good work and how much Trixie helped him and his wife Fiona before she died.

The two men on the radio with Trixie are against the abortion bill and barely let her speak, but she finally gets off an impassioned defense of it, citing her own experience helping women. Everyone listens at Nonnatus House, and Nancy gets angry about the men. They have no clue what making a decision about your own child is like, she says, and she would know. She has had a baby.

Sister Julienne calls Nancy to her office. The religious sisters who brought Nancy to Nonnatus didn’t mention that she was an unwed mother. Furthermore, Nancy goes to visit her daughter, who is in a London orphanage, once a month—her daughter believes Nancy is her sister—and has been lying to the Nonnatans about it. Nancy just wants a respectable life for herself, and hopefully eventually her daughter.

But no hospital would hire an unwed mother, and Nancy and the sisters have lied to Sister Julienne. She must consider what to do in this matter.