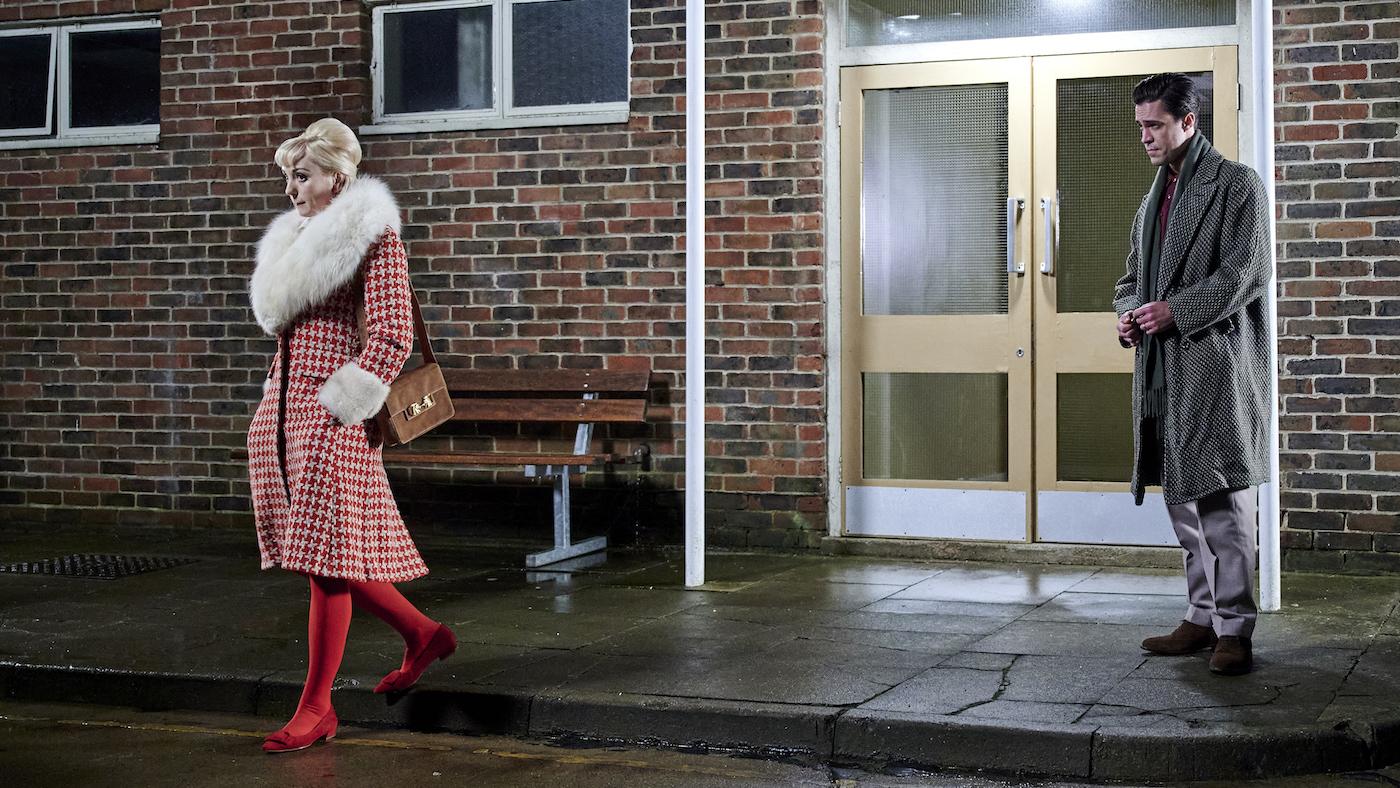 Call the Midwife airs Sundays at 7:00 pm and is available to stream for a limited time. Recap the previous episode and other seasons.

Sister Frances is attending Doreen Norris as she gives birth at home, but it’s not much of a home. Her husband isn’t around, so it’s just Doreen and her young daughter. There’s no running water currently, although the room is damp, and Doreen’s mattress sags so much Frances moves her to the couch to give birth. Trixie comes with hot water and other supplies, and Doreen gives birth to a girl.

She cries immediately afterward, lamenting that her life is “such a mess.” Sister Frances will stay with her overnight as they wait for a bed at the maternity clinic to open up. Frances wakes in the night to the newborn’s cries, and finds a rat with the baby. Horrified, she beats the rat to kill it.

The next day, she marches to Violet and shows her the dead rat. “This is how people live!” she tells Violet, who is a council member for the borough.

Sister Hilda later chides Frances for startling Violet, but she and Violet set up a meeting with a representative of the company that owns Doreen’s building, letting tenant landlords maintain the building. The midwives insist the representative meet them at Doreen’s apartment to see the conditions.

It turns out the representative is Matthew Aylward, to Trixie’s shock and disgust. He himself is disgusted by the conditions of the tenement. The medical examiner declared the building “unfit for human habitation,” Violet tells him. Stunned, he says he will speak to the tenant landlords, and rushes out. Trixie follows and loudly reprimands at him for not doing more, throwing a toy from Doreen’s apartment at him.

Later, he calls Nonnatus to apologize to her, but she hangs up: the tenants deserve an apology, not her.

Sylvia Potts is attending classes at the maternity clinic, although she is not pregnant. She can’t have kids, but will be adopting from her older sister Blanche, who is 42 and already has two grown daughters; she doesn’t want another child but knew Sylvia wanted one of her own. The arrangement is harmonious and happy. When Blanche gives birth to a boy, she insists that Sylvia hold him first.

Blanche gives Sylvia a silver cup for the newborn, with a space for his name to be engraved. Sylvia wants to name him Justin. As Blanche holds him—you can tell she is trying not to show how much she loves the baby—Nurse Crane notices something about the boy. Dr. Turner confirms her suspicions: he has Down Syndrome.

The midwife-in-training Nancy learns a lot from Sylvia and Blanche’s adoption. She visits the orphanage where her daughter, Colette, lives, and tells the nun in charge that she knows about her rights now. But she has agreed to the terms—that she visit only once a month and pretend she is Colette’s sister—the nun rejoins. When Nancy sees that Colette has a bruise on her arm, however, and Colette won’t say which nun gave it to her, Nancy pulls her daughter out of the orphanage. I’ll bring her up myself, she tells the nun in charge.

The Turners are about to send their own son out into the world. Tim is off to medical school, and has been “discharged from duty” at the clinic by Miss Higgins, who gives him her personal pen as a parting gift.

Cyril had to say goodbye to his whole family when he crossed the ocean to England, and now he will never be able to see one member again: his beloved grandfather has died. Lucille suggests holding a prayer service at the same time as his grandfather’s funeral, as a way of connecting. Afterwards, Cyril and Lucille decide that they should stop delaying their marriage in order to save up money to go back home and just get married at Christmas in Poplar. They’re from two different countries, so it would be difficult to organize a wedding at home anyway, and they have a family of friends in England.

When Sylvia Potts learns that Blanche’s baby has Down Syndrome she’s terribly upset, and runs out crying. Blanche is more levelheaded, and later visits the baby in his incubator, holding him. “You don’t look like a Justin,” she tells him.

She later argues with Sylvia over the baby. He will have to go into a home, Sylvia says. The only home he’ll go into is mine, Blanche responds. She will keep him, and name him Robert. Her husband, Walter, is uncertain, but her daughters love their new baby brother.

Hearing about Robert and understanding the situation because of Reggie, Violet brings the newborn a present. You are a very lucky woman, she tells a smiling Blanche.

Walter is less sanguine. When Fred and Reggie visit the pub, he rushes out. Fred follows and talks to him. Walter won’t tell Blanche, but he fears a difficult road ahead with Robert. When he was a boy he once joined other kids in throwing stones at a “simple” boy. What will it be like to raise Robert? Fred reassures him that Reggie taught him to love more. It won’t always be easy, but it will be worth it.

Reggie goes to meet Robert and his family, and Sylvia returns Blanche the silver cup. She has had it engraved “Robert.”

Matthew comes to Nonnatus to apologize to Trixie in person, but she has bedbugs—Sister Frances brought them home from Doreen’s home—and tells him they will talk another time. Later, he explains that his family bought tenements a century ago as a sideline investment. He intends to make amends and change things, to do something forward-looking in order to also help move past his grief at the death of his wife Fiona.

So he donates £1,000 to Nonnatus House, and promises to do so every year as long as they continue their work in Poplar, as a means of reparation. He makes the donation in memory of Fiona—and he finally reads the letter she wrote him before she died, with Trixie.

Nancy also has a bright future—after enduring a near-catastrophe. When the hotel landlord comes for the rent and she doesn’t have it, he says he’ll wait—if she’s “kind” to him. She slams the door on him and gets a cut cheek in the struggle that ensues before he leaves.

She brings Colette to Nonnatus and benefits from Monica Joan’s defense of her. The midwives ask her what she wants. I want to qualify as a midwife, to make a home for Colette, to no longer have secrets, she says.

That is granted. She can continue to live at Nonnatus and train, and the midwives will be honest about her situation. A local foster home will be found for Colette, although Nancy should wait a while before revealing her true relationship to her daughter. As everyone gathers for a harvest supper at the clinic, Nancy brings Colette, holding her hand and beaming. 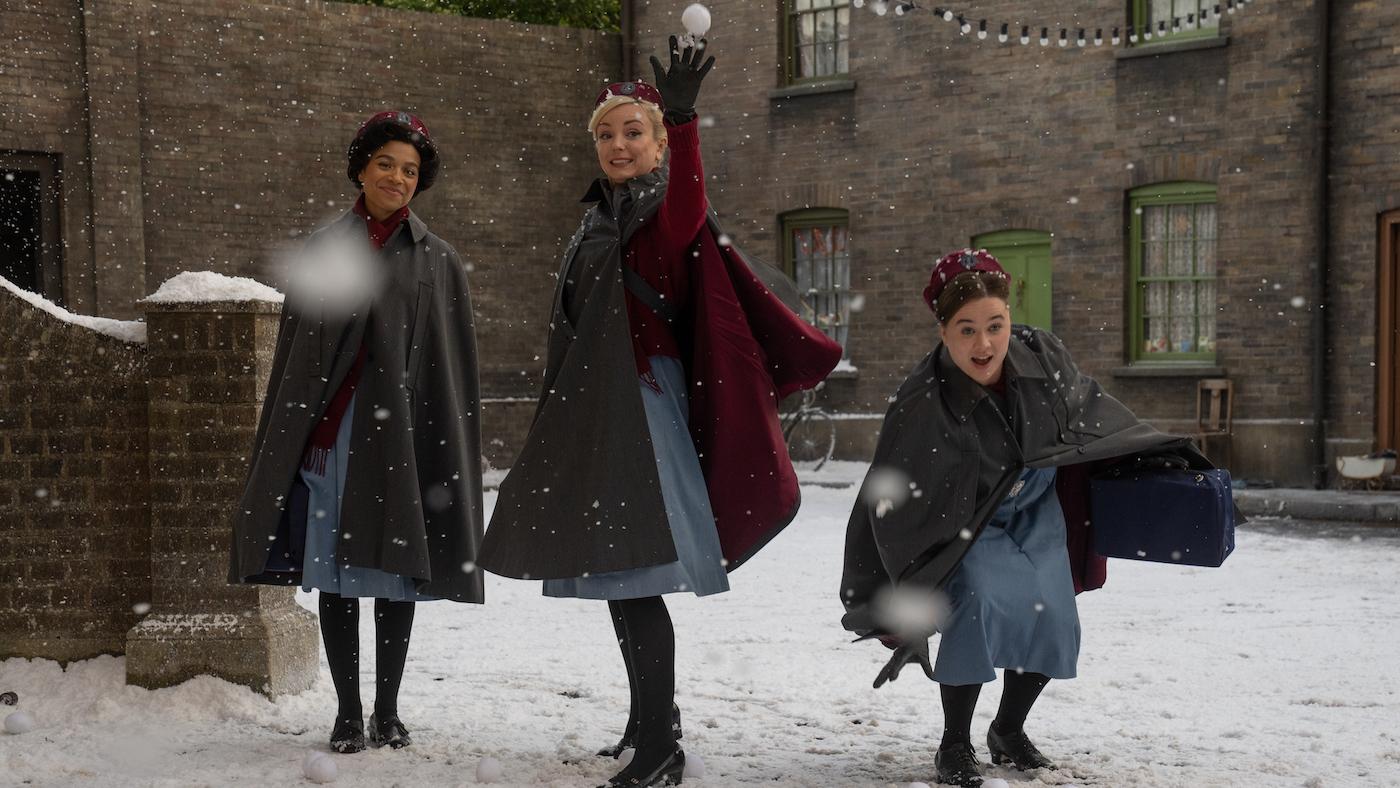