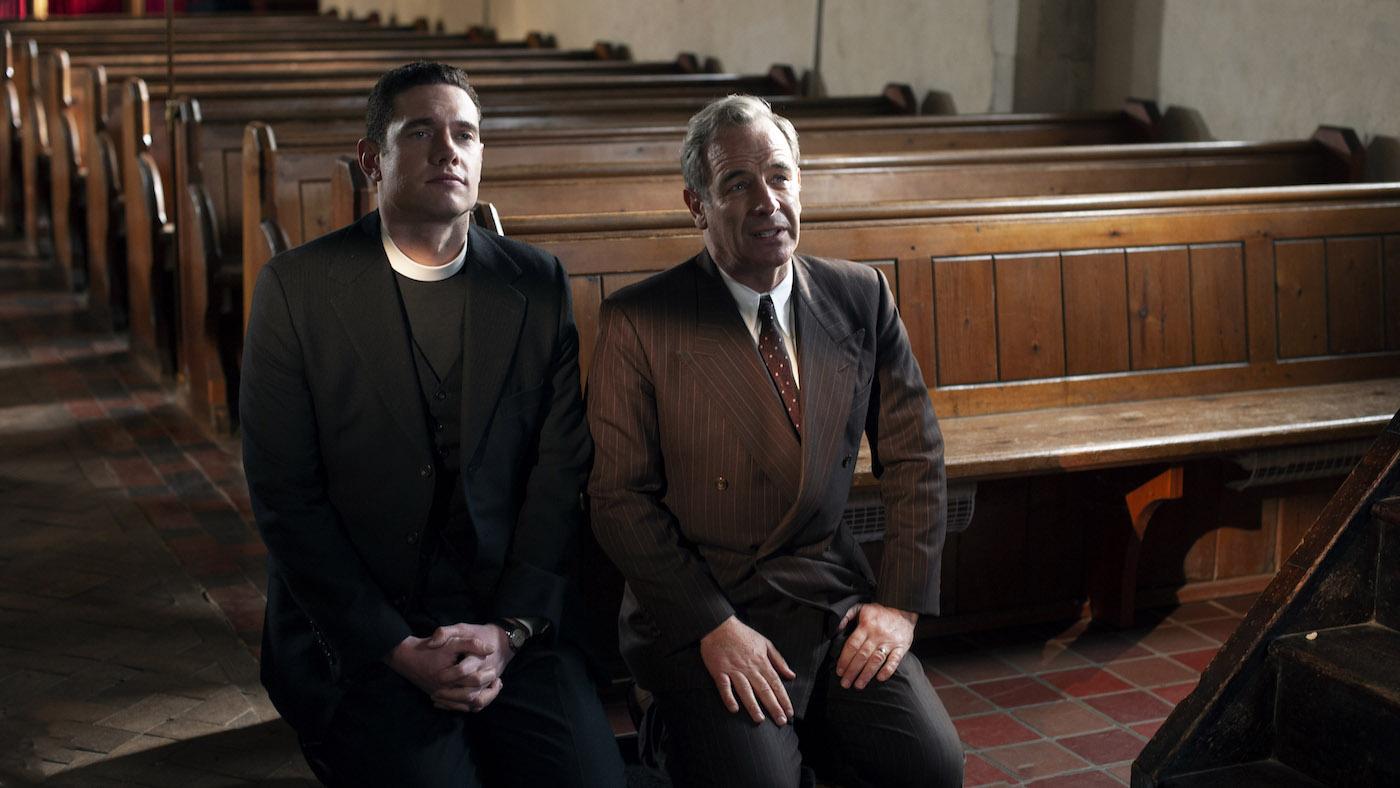 Geordie is having a crisis of faith in the law, in his friendships, and in his marriage. Photo: Masterpiece and Kudos

Grantchester airs Sundays at 8:00 pm and is available to stream. Recap the previous episode and other seasons.

Will is preparing a speech advocating the decriminalization of homosexuality, but is told by the bishop that he won’t be speaking at the convention. Instead, he should prepare for a visit—and make sure not to have any half-dressed women such as Tamara around. Will realizes that Henry has been reporting on him to the bishop; Mrs. C. calls Henry a “Judas Iscariot.”

Henry apologizes to Will: the bishop asked how Grantchester was, and Henry can’t lie. Will may have the luxury of bending the rules, but, as a Black man, Henry is held to a higher standard—including by himself.

Cathy is showing Geordie that he should hold himself to a higher standard—he’s sleeping on the couch after their fight. He is called to investigate marital strife worse than his: a singer, Rita Daltrey, calls for Geordie specifically with accusations of abuse at home. But when Geordie and Will arrive—the maid setting off a blaring alarm by letting them in—Rita and her husband Gene claim her bruised face is from tripping on the stairs.

While they are there, Rita’s doctor arrives, saying “not again,” and gives her some pills. As they leave, Geordie purposefully leaves his hat behind; the maid rushes out to give it to him, along with a card from Rita. It’s a business card for Geordie’s old army comrade, the lawyer Johnny.

Johnny told Rita to ask for Geordie, he explains at the police station. Asking to speak to Geordie alone, Johnny tells Geordie that Rita wants to leave Gene but is afraid. The alarm system is meant to keep her in, not burglars out. But it’s wired directly to the police station, so Geordie can tell him when it’s turned off. Geordie reluctantly acquiesces. His assistant, Miss Scott, sees him show the records to Johnny.

The next day, Gene is found shot dead at home. The alarm only started when the doctor arrived, after the maid found Gene. Rita was asleep from her pills at the time. Geordie tries to talk to Johnny alone after bringing Rita to the station, but Johnny asks Will to stay: Rita could use a vicar. In her interrogation, Johnny aggressively defends her against Will’s questions, until she finally interrupts. I sometimes wish I had fought back against Gene, she says, but I was never strong enough—she didn’t kill him.

Geordie sends Will to drive Rita home and speaks to Johnny alone. Johnny admits to shooting Gene. He was coming to rescue Rita, with whom he is having an affair, and Gene startled him; it wasn’t meant to happen. He tried to make it look like a robbery. Gene deserved it for how he treats Rita. She herself doesn’t know what happened.

Learning that the maid was oddly tired and went to bed early the previous night, and again finding the doctor at the Daltrey house, Will takes samples of drinks from the previous night to test for drugs. But when he comes into the station the next day, he learns that Geordie cancelled the tests. Geordie’s also late for work—unusual for him. Miss Scott tells Will that Geordie showed Johnny the Daltrey house’s alarm codes.

Henry finds Will asleep in the chapel and tries to help him, but Geordie resists. Instead he is confronted by an angry Will, who has learned from Cathy that Geordie almost hit her. I know about letting Johnny see the alarm timings, too, Will says. Geordie has lost faith in the law: just look at what has happened to Leonard.

Will tries to understand why Geordie has been struggling lately, ever since Johnny reappeared. Geordie shows Will the list of comrades with whom he was in prison in Burma, and explains that he and Johnny were the last two survivors. The night before they knew one of them would be shot, Geordie prayed that it would be Johnny. The next day, Johnny was taken—and the camp was liberated.

After the war, Geordie avoided ever seeing Johnny again, until he showed up recently. He has never forgiven himself. “You prayed to live,” Will tells Geordie. Look at the life you have built out of that awfulness; you can’t give that up. So Geordie goes to speak with Johnny.

Meanwhile, Leonard has been released early for his help exposing the prison chaplain as corrupt. Jack comes to pick him up, with Daniel hidden in the back seat, and asks Leonard to have a word with Mrs. C. She has turned against Henry for “tattling” on Will—she’s already lost Leonard, she can’t lose Will too—and is going to frame him as a drunken partier when the bishop comes to the vicarage. Leonard immediately chides her and then reassures Henry that Will and Mrs. C. will warm to him.

When the bishop does arrive, he’s kept waiting for Will, and lays into him when he finally arrives. But Henry defends Will: I’m naïve, he says, and misconstrued Will’s actions. I have a lot to learn from him. Will responds that he can learn from Henry too.

Why was Will late?

He has learned from Larry, who tested the drinks from the Daltrey house, that there was sedative in them. The Daltrey doctor says he prescribed it to Rita: she’s been hurting herself lately. The maid chimes in, saying that Gene never hurt Rita; he was trying to protect her from herself. The sedative drinks weren’t for Rita: they were Gene’s and the maid’s—which means Rita wasn’t drugged that night, but drugged the rest of her household.

Will rushes to the hotel where Johnny is staying. Geordie has told Johnny he is going to reveal the truth about Gene’s murder, but he’ll try to get a reduced sentence for Johnny. Johnny says he felt abandoned by Geordie when they returned from the war and Geordie avoided him.

But when Will bursts in—Rita has arrived too—he tells Geordie he doesn’t owe Johnny anything. You did what you had to do, he tells Geordie. Plus, he knows the truth: Rita killed Gene, not Johnny. She’s using you just like you’re using Geordie, he tells Johnny. Rita pulls a gun. Johnny pushes it away as she fires at Will, causing her to miss. Geordie wrests it away and arrests both her and Johnny.

Later, he comforts Johnny, who is distraught at the idea of being in a prison again. This is nothing like Burma, he says; plus, you saved Will, which will be taken into account.

Geordie can only hope for clemency from Cathy, who has packed a bag for him. She wants time apart. Geordie goes to the chapel and prays, before being joined by Will. I’m not all right, Geordie tells him—but at least I know it now.

I have to win Cathy back, he says. I’ll help, Will says with a smile. With your track record, I might be better off alone, Geordie replies with a laugh.