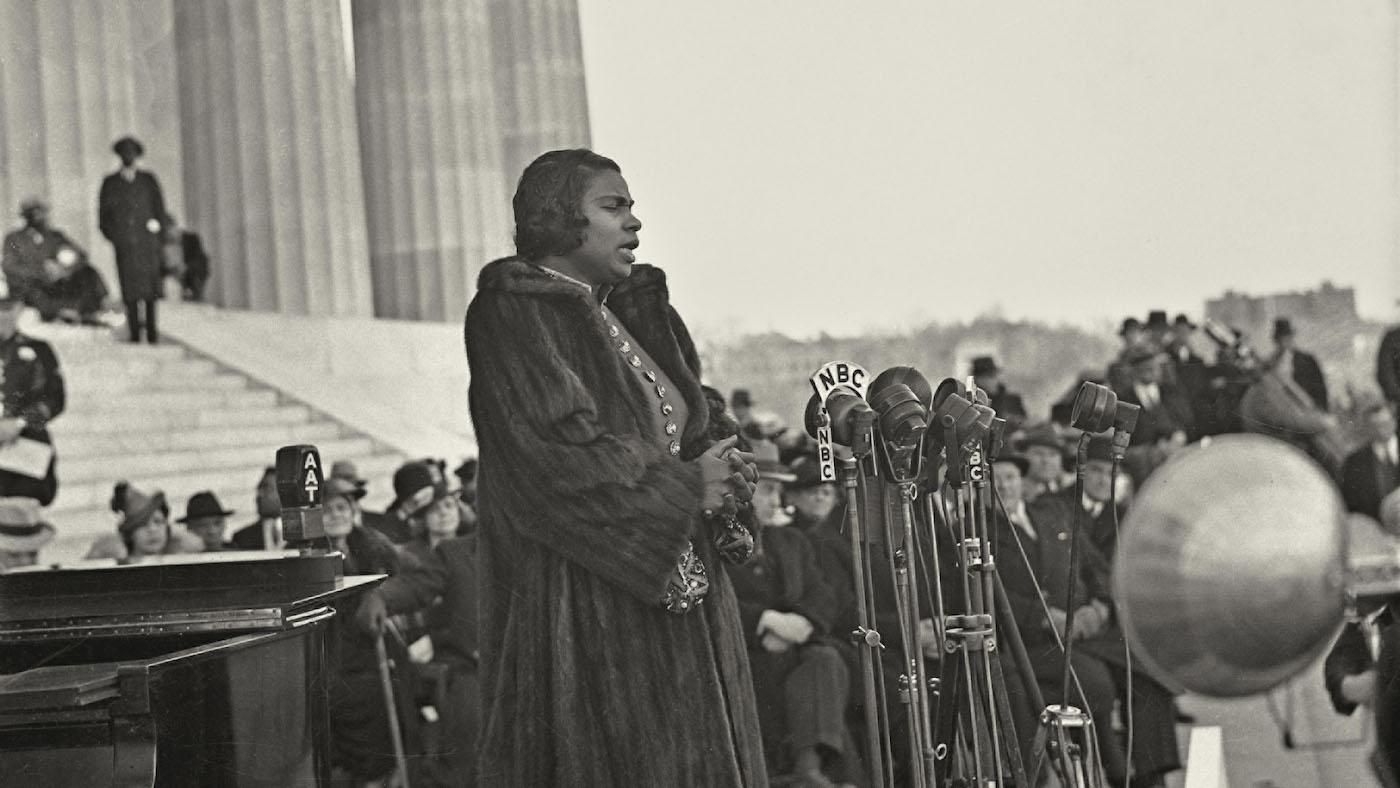 American Masters — Marian Anderson: The Whole World in Her Hands airs on WTTW Tuesday, February 8 at 9:00 pm and will be available to stream.

Marian Anderson is most remembered for her unforgettable 1939 concert at the Lincoln Memorial, held there after the Daughters of the American Revolution denied her the use of their concert hall because she was Black. But the classical singer’s life and artistry encompassed much more. Arturo Toscanini called her a voice of the century. She was the first Black soloist to perform at the Metropolitan Opera. She found fame in Europe, garnering praise from the composer Jean Sibelius. She sang for nobility, presidents, and the March on Washington, and served as a delegate for the United Nations and cultural ambassador for the State Department.

We spoke to Rita Coburn, the director of a new American Masters on Anderson, about the documentary. Coburn is a a Chicago area native who lives in the south suburbs. She previously co-directed an American Masters profile of Maya Angelou—you can revisit our interview with her about that documentary.

You can also hear Anderson herself in a two-part interview conducted by Studs Terkel of our sister station WFMT. She spoke to Terkel alongside her nephew, the conductor James DePreist, in 1966, as well as by herself in 1960. Furthermore, the impresario Sol Hurok, who helped shepherd Anderson's career into the limelight, spoke with Terkel in 1971.

What drew you to Marian Anderson?

Rita Coburn: Marian Anderson came to me. Regardless of what other people may think, this is just the truth. When I finished doing the Maya Angelou [documentary], I said, “Oh my God, what am I going to do now?”

I don't believe people come back from the dead. But what I do believe is that what's on your heart is in your dreams, is in your mind, it's in your relationship with God, if that's what you have, and I do. So I went to bed one night just in a tither, and I heard and saw Maya Angelou. She said to me, “Your next documentary is Marian Anderson.” And I'm like, "Marian Anderson?" I wasn't thinking about Marian Anderson. So I woke up and ordered a book [on her].

Time went on. And then I got a call from Michael Kantor at American Masters and he said, “Hey, Rita, I got a documentary I want you to do: Marian Anderson.” And I said, “I'll do it.” So that documentary chased me.

My daughter studied classical music and opera. I was not unfamiliar with classical music. But my sweet spot is Black history, and it is also Black women and the culture. And of course, that leads into civil rights because that's just where we are as a people, as a country, as women and it is the crucial question for the American society as to when will there be parity.

So much of the narration in this documentary is in Marian Anderson’s own voice. Why did you want to tell the story in that way?

Coburn: I went to the University of Pennsylvania, which has her collection, and I began to look through her collection. I looked at the letters and talked to the people who manage the collection. I found out that they had recordings of her voice and they were going to soon have that available in the collection. Automatically, my spirit, my antenna said, Listen.

I didn't know I was going have to listen to 34 reel-to-reel tapes. I had the tapes transcribed and highlighted what she said about her life and built the story around that. What did she have to say? What came through was how she felt about certain things; deep belly laughs; what her father meant to her. You tell a story the way the story cries out to you, and what I had not heard in everything that I researched was her voice. Not singing voice, her speaking voice.

What was most interesting to you about Marian Anderson’s life?

Coburn: Everyone wants to start you with [her concert at the Lincoln Memorial in] 1939. But that’s not where she started. She was born in 1897. How did she make it from there to 1939? When I go into that, I see a Black family, a Black community, a struggle. It is important that we understand that this woman was able to come from all of that and rise to this. And then I want to know, once she got to 1939, what happened then, and how did she get on the stage of the Met, and why didn't she get on there earlier? And then I want to know what happened to her afterwards.

Why did you want to show the lineage of Black classical singers who followed Marian Anderson by including so many of their voices in the documentary?

Coburn: Historians are important. But you also need to have people who in the present day connect the dots of their craft. So Angela Brown, J’Nai Bridges, George Shirley, Martina Arroyo, and Denyce Graves were asked to come on board because they live the life of a classical singer. And they know things culturally that we wouldn’t know unless they told us. I thought it was important that they got to speak on that.

What do you admire most about Marian Anderson?

Coburn: I think Marian Anderson was a God-fearing woman who came to an understanding of herself and her culture. I won’t say she transcended racism; I think she found a way within her own voice—not just the classical voice—to be heard. I don’t think she was the demure person that people pass her off to be. I think she was shrewd. I think she was very much in charge of her career from the very beginning. She made her political statements about being a woman, being a Black woman, and being in this society in much more than a speaking voice that may have pushed her out of situations. I have a great deal of respect for her.