"You really just need the flour and the sugar and the water," says Jaye Fong about Nin Gou, a glutinous rice cake often prepared and given as a gift at the Lunar New Year in Chinese households. "Everything else is a bonus." It's a simple recipe, but it carries meaningful symbolism nonetheless. "Both my grandmas are from smaller village regions," Fong explains. "A lot of those provinces are very poor or humble, so a lot of the foods that they have are basic: they're meant to last long, they use easy-to-find ingredients. This New Year's Cake is able to keep for a very long time. The notion that you're continuing to bring good luck and prosperity well into the new year is really great, and that you can give it to people and it will travel well."

Fong is a baker who sells Asian and Asian-inspired pastries through pop-ups and Instagram under the name Maa Maa Dei. "It is a Cantonese phrase that means, 'It's not great. It's alright,'" she says about the moniker with a laugh. "I wanted to set those expectations low for myself because I had never done any of this before." Her parents owned Chinese and Japanese restaurants in Bloomington-Normal, Illinois when she was growing up, but she went on to study architecture at IIT in Chicago at her parents' urging. Her heart was never really in it, and she eventually moved back into the world of hospitality. She was working in sales and catering at London House downtown when the pandemic hit and she was furloughed.

After baking buns for a Black Lives Matter fundraiser and hearing encouraging feedback, she decided, like so many others during the pandemic, to try to turn her hobby into a job, and launched Maa Maa Dei in September of 2020. "I think a lot of young Asian Americans have a hard time connecting with their elders or the culture that they've kind of stepped away from," she says. "I feel like a lot of the older generation are hesitant to speak about their time in China or whatever Asian country they're originally from." Fong explores and researches traditional recipes to try to restore some of that lost connection, and she always tries to talk to her grandma about the dishes to see if she has any advice. "Part of it is preserving that cultural heritage—as our elders get older, we're slowly losing that knowledge in the U.S., those ties to Hong Kong and China and Taiwan."

But Fong doesn't slavishly reproduce traditional recipes. She also tries to reconcile the flavors she grew up with in America with those of China and other Asian countries. "A lot of the people that I talk to are kind of in that awkward space in between where they really want to know what their parents or grandparents ate, but they also enjoy all of the things that they grew up eating," she explains.

She often ties her dishes into holidays and seasons, making mooncakes for the Mid-Autumn Festival, floral pastries for cherry blossom season, ube pies for Thanksgiving, and glutinous rice dumplings for the Dragon Boat Festival. "I really think that it's important to expose people to as much diversity as possible," she says. "Diversity really helps everybody to be more kind to each other. If we keep on shutting out people or not paying attention to the things that are important to other people, we're going to lose touch with what makes us good on this planet. The more you know about each other and your backgrounds and your cultures and where you come from, the more people realize, 'I can be empathetic to somebody, because I can understand that they have their own traditions and special ways of celebrating things.'"

That includes traditions like making and sharing Nin Gou with friends and family, just as Fong's grandma has always done. 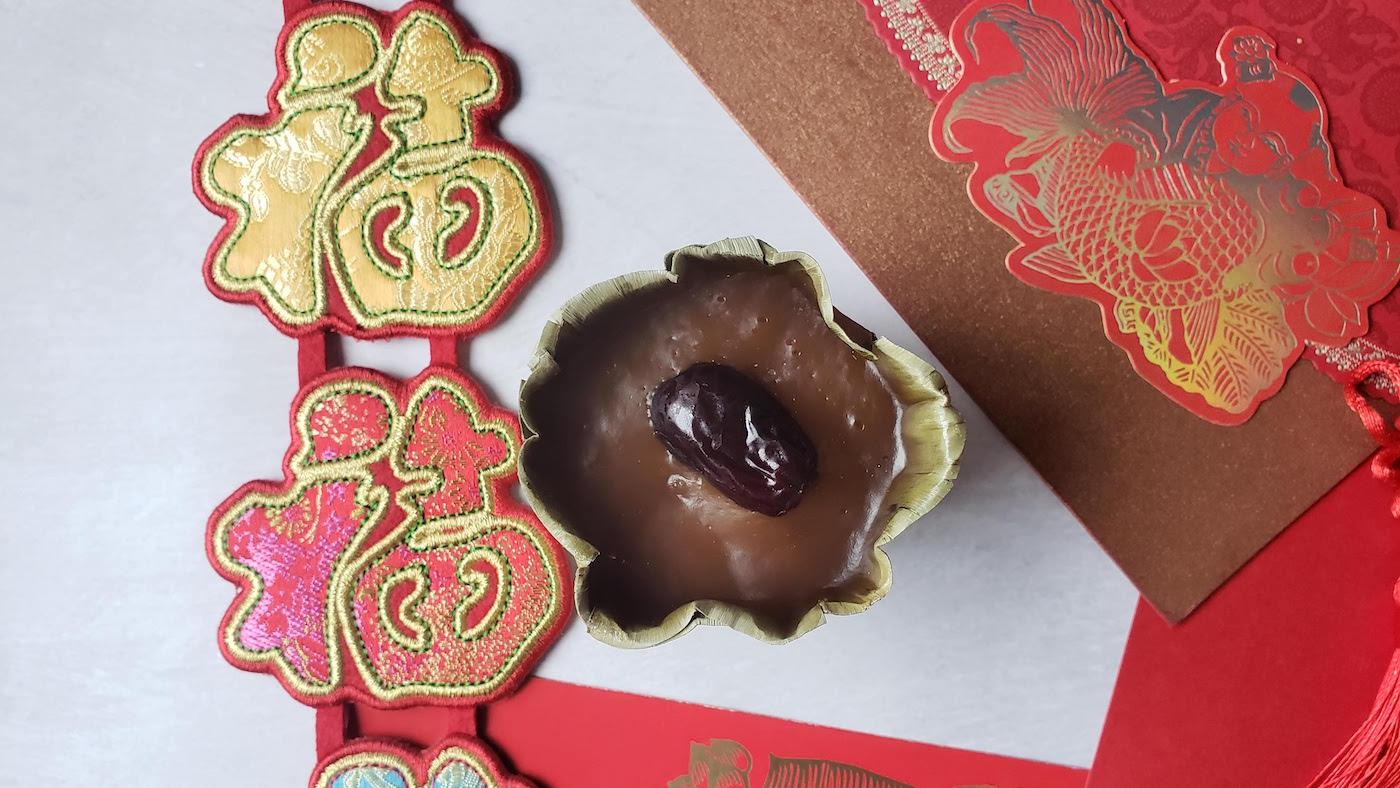 You can also prepare Nin Gou in banana leaves if you want to dress it up. Photo: Courtesy Jaye Fong

Nin Gou is a traditional steamed cane sugar-based mochi-like glutinous rice cake with a firmer chew. The name 年糕 comes from the Chinese word 粘 (nián/nim), meaning "sticky", which is identical in sound to 年, meaning "year". The word 糕 (gāo/gou), meaning "cake" is identical in sound to 高, meaning "high or tall". Chinese love their homonyms! As such, eating New Year’s Cake has the symbolism of raising oneself taller/higher in each coming year (年年高升 nián nián gāoshēng/nin nin gou sing). That is why people love giving it as a gift to family and friends during Lunar New Year.

Since Nin Gou is often given as a gift, most families will make it in single-use metal tins. My grandma always makes them in the rectangular or circular kind. However, if you want to dress them up, you can make them using banana leaves.

The cake is meant to keep for a longer period of time. It will firm up as the days go by and that’s ok. Keep it wrapped in plastic film or in an air-tight container in the fridge for 1-2 weeks. To serve, pan fry each slice to create a warm, crispy yet chewy, sweet and savory treat. (See below for two suggested methods, or to microwave.)

1. If using banana leaves, be sure to blanch, scrub, and dry them thoroughly with a clean cloth, then line the tin/pan with the leaf, ensuring no tears or gaps. Trim the leaves so they are only 2" above the tin/pan. Spray lightly with oil. If using a regular metal tin or pan without banana leaves, spray or wipe with oil.

2. Bring water and ginger slices to boil in a small pot. Simmer on low for 10 minutes with the lid on.

3. Remove the ginger slices and add the sugar, stirring until completely melted. Add zest if desired. Allow the mixture to cool completely.

4. In a large bowl, add the glutinous rice flour and create a well. Pour the flavored sugar water into the center of the well and whisk to combine until smooth with no lumps.

5. Fill the oiled pan(s) to near the top with the liquid batter. Tap to bring any bubbles to the surface and prick any bubbles with a toothpick. Decorate the top of the batter with jujube as desired.

6. Place pan(s) in a steamer filled with water and steam over medium-high flame for 30-60 minutes. (The bigger the pan, the longer the steam, so if you are making several smaller tins, it will be a shorter time). Cake is done when a toothpick comes out with just some cling or completely clean.

8. Cover with plastic wrap or foil and rest for 24 hours at cool room temperature before gifting or transferring to the fridge.

Microwave method: Cut a slice (at least ¼” thick) and microwave for 10-15 second bursts until it is soft and gooey again. This is the way my grandma always prepared it for us as kids. It is the purest way of tasting the base sweetness of the Nin Gou.

Pan-fry plain method: Cut slices ¼” thick. Lightly oil a non-stick pan and heat over medium-high. Pan fry each side of the slices until crisp and browned. I like a little char on mine! The result is a crispy/crunchy outside and a gooey soft inside! 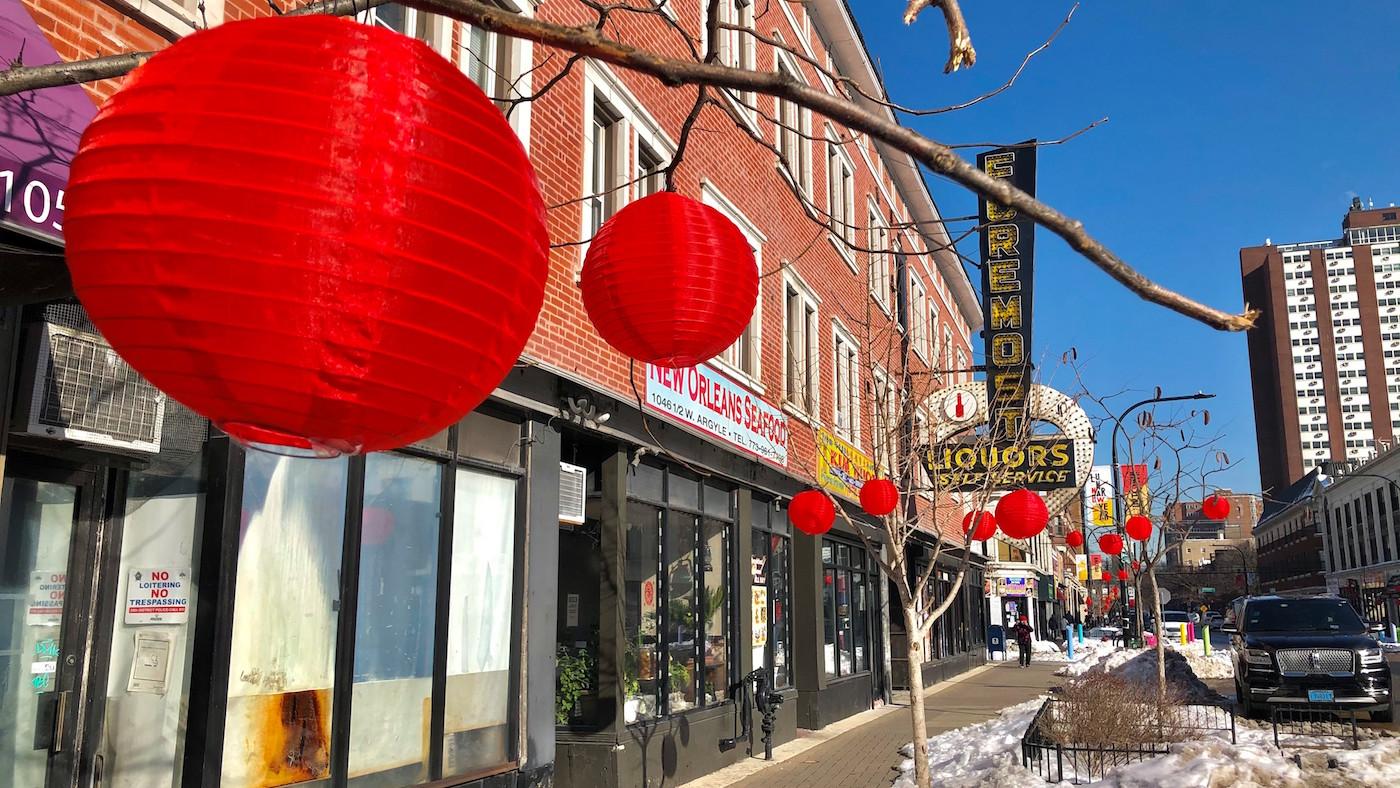