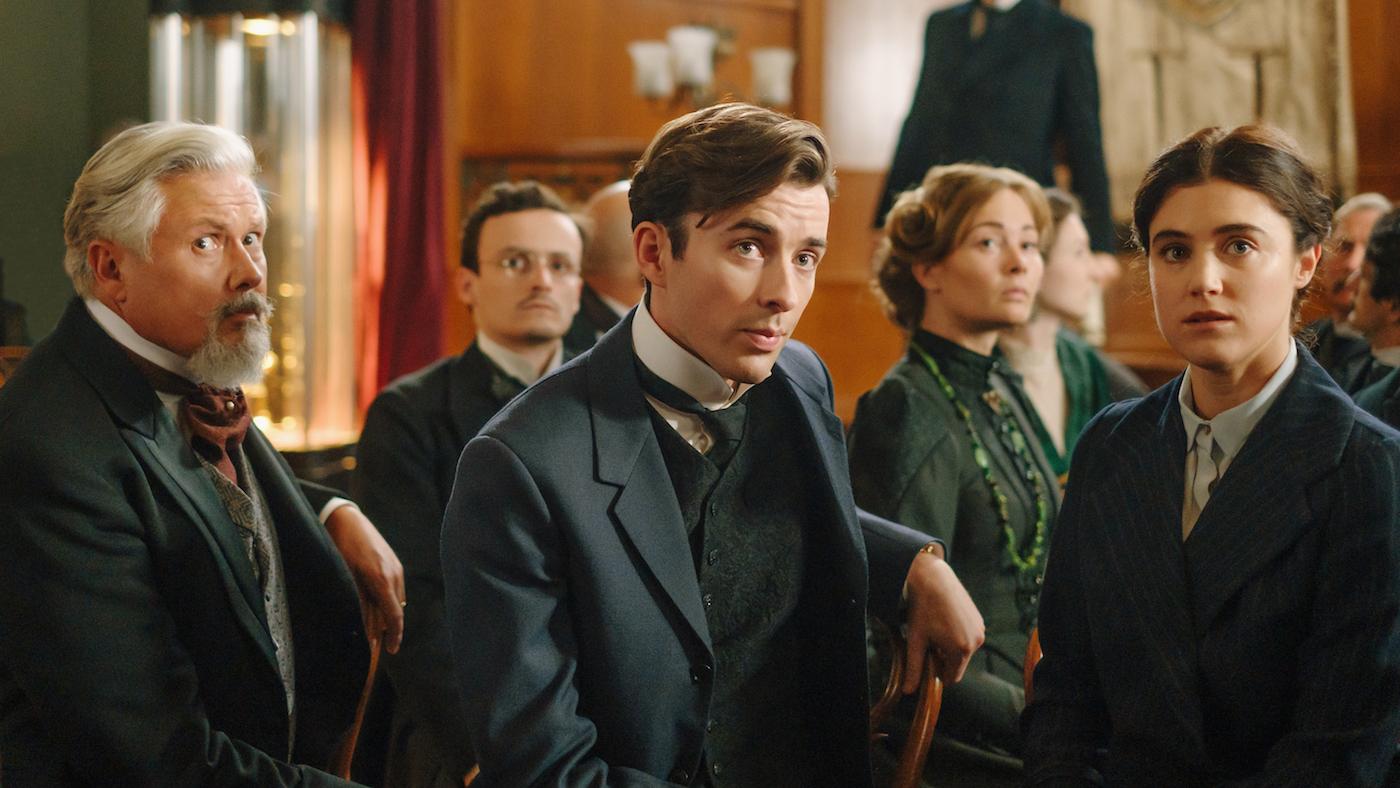 Max, his father, and Amelia witness a confrontation between a Jewish man and an extremist monk. Photo: Endor Production Ltd/MR Film GmbH

Max’s father is pleasantly surprised: his son wants to join him at a lecture on religious relics at the historical society, even though Max places no stock in religion. His interest is explained when they arrive to find Amelia waiting. The lecture also ends up being far more eventful than expected.

As the speaker, a Brother Stanislav from a nearby monastery, is introduced, a man calls out from the back of the room to accuse the monk of being a bigot. Stanislav recently wrote an article stirring up hatred of Jews. A Jewish boy was just beaten by other boys, who scrawled “demon” on a nearby wall—the same word Stanislav used in his article, quoting early church fathers. The man cites his own scripture, that he “shall pelt him with stones,” and hurls a rock at Stanislav, breaking one of the displayed relics.

Max’s father recognizes the man as someone from their synagogue, Isaak Korngold—the brother of Clara’s new fiancé Jonas. Max is embarrassed that he and his father did nothing in the face of the revelation of Stanislav’s bigotry, unlike Isaak.

But then Stanislav is found beaten to death in the sacristy of his monastery. The sacristy is where the relics are kept; no one could view them without Stanislav’s permission, and the only other key is held by the chamberlain, Brother Killian. Oskar arrives to investigate, but the abbot of the monastery won’t let him remove the body for a post-mortem. Instead, the coroner comes to the monastery and determines that Stanislav was beaten to death with stones.

The abbot tells Oskar that Stanislav held controversial views and had recently been threatened at the lecture, but they didn’t take the threat seriously. Oskar arrests Isaak.

Clara visits Max at his practice to ask him to intervene on behalf of her soon-to-be brother-in-law. When Max goes to the police station, Oskar tells him no before he even opens his mouth. But Max manages to convince Oskar to let him talk to Isaak.

Isaak is devout, unlike Max, and is planning to plead his own case and denounce Stanislav’s bigotry in court. He taught the boy who was beaten in Hebrew school.

Max entreats Oskar to open an investigation: why would Isaak so publicly announce a threat that could tie him to a killing? Oskar reluctantly agrees, despite his boss von Bülow’s pressure to solve the case quickly. Oskar knows there isn’t much evidence against Isaak.

But the abbot won’t let Oskar back in to the monastery. He also orders all the brothers not to speak to the police. This unnerves Brother Killian, who comes to Oskar at the police station. Something is being kept secret, he says, offering to help Oskar. But he can’t go so far as to admit him to the monastery.

Instead, Max devises a plan to pose as a monk on a pilgrimage from Oxford in order to gain access. Killian can vouch for him as an old companion, and he knows his catechism from school. He tells his parents and an upset Amelia that he is going away on a conference for a few days.

His parents find the timing odd, given that Max wants to help the Korngolds on behalf of Clara as some atonement for ending their engagement. Jonas, a banker, has already begun to lose clients due to the stench of scandal surrounding his brother. Luckily, he has been offered help by Strobl, an old friend and a benefactor of the historical society.

Killian gets Max into the monastery and discreetly leaves him a key to Stanislav’s now-vacant cell amongst his sheets. Max searches it during mealtime, paging through the late brother’s books. Later, Killian lets Max into the sacristy while the other monks are in the refectory. It hasn’t been cleaned yet, but there aren’t any bloodstains. Stanislav must have been killed somewhere else and brought there, but the only way into the sacristy is through the chapel and there’s no blood there either.

Searching for more information, Max goes to the infirmary and requests a remedy for sore joints as a pretext for speaking to the monk in charge there, Brother David. When he asks about Stanislav, David drops a bottle. Max also asks to offer a prayer over Stanislav, and David takes him to see the body, which must lie out according to the rules of the order. Max notices scratches on Stanislav’s feet and ankles, as though he had walked through thorns.

Leaving the monastery walls—the abbot notices—Max finds some thorny plants and follows a path through them to a small building. There are bloodstains on a rock outside it: this must have been where Stanislav was killed.

Oskar visits the monastery to “confess” to Max, who explains what he has found. He brings Oskar to the site of the murder, but rain has washed away the bloodstains. If Stanislav left the safety of the monastery walls to come there of his own volition, he must have been meeting someone he knew, someone he thought was a friend.

Oskar notices a message scratched into a rock. It reads “enemy” in Hebrew. 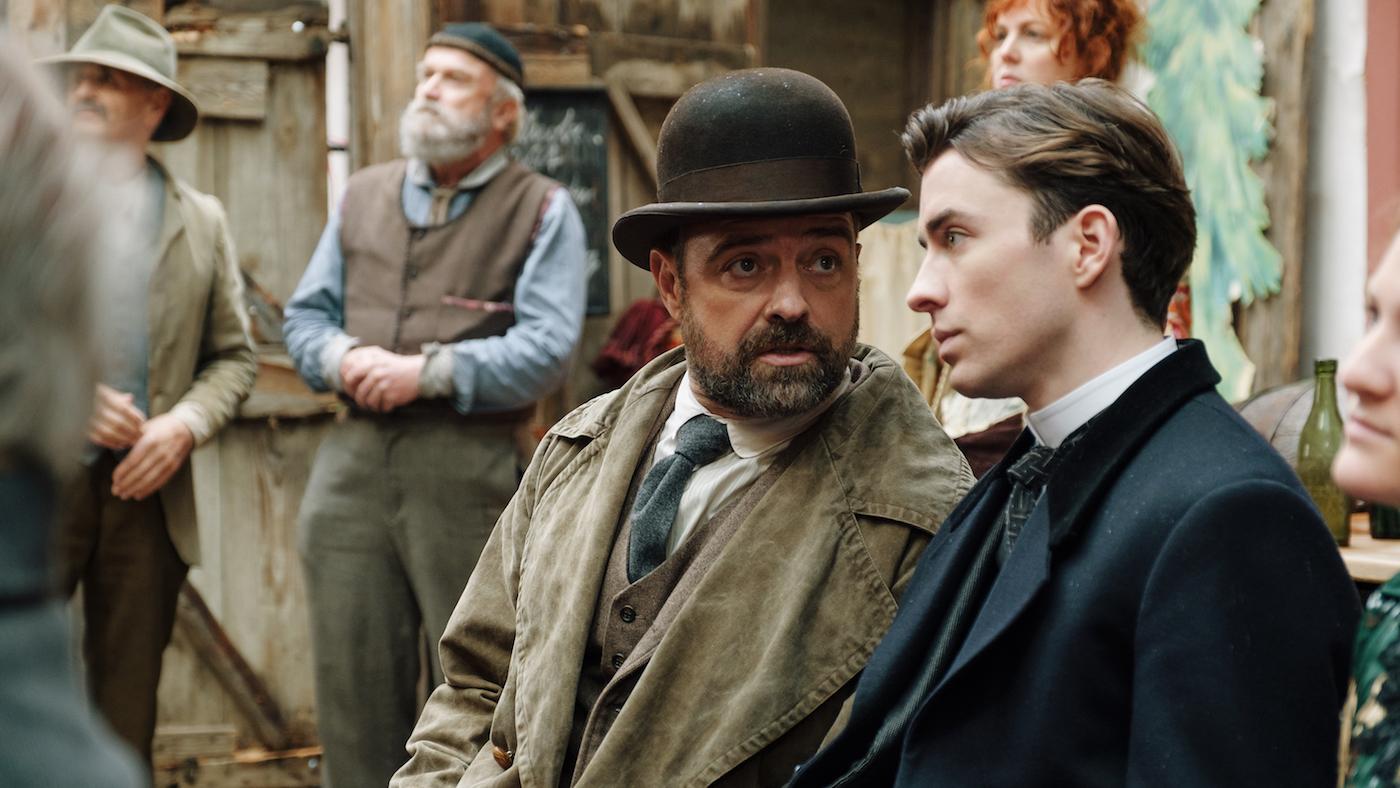 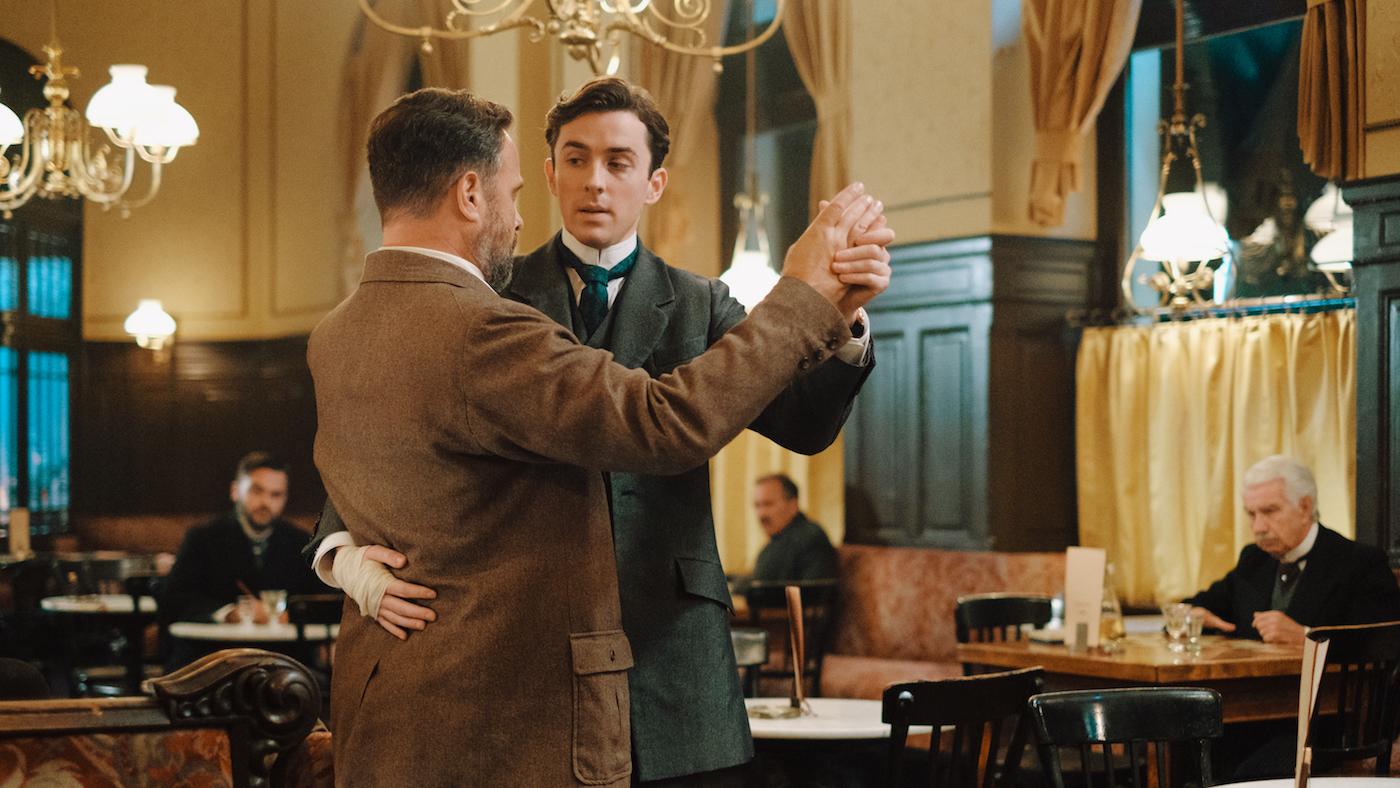