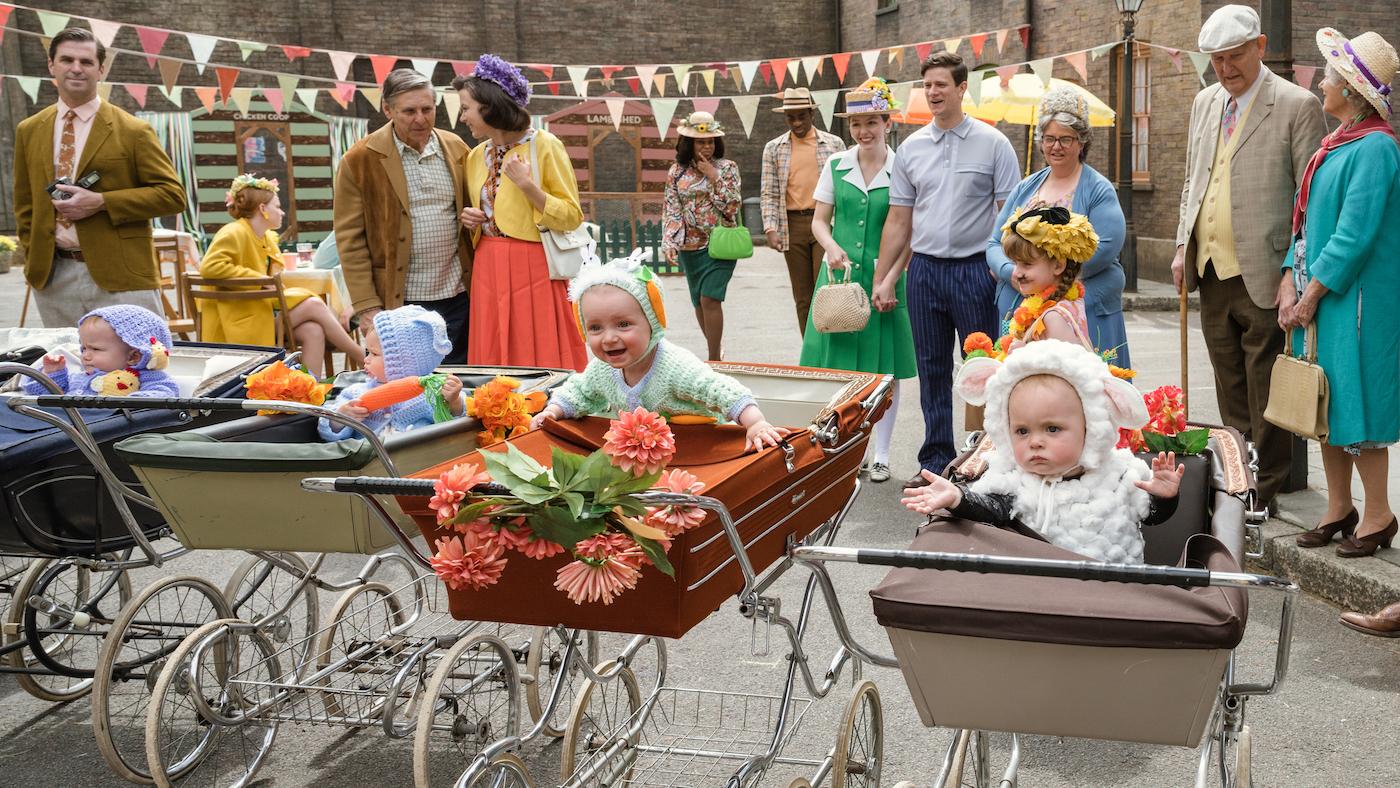 It’s Easter in Poplar: children and adults are decked out in adorable bunny and chick costumes and sweaters, while women air out their homes and sweep out the dust.

Spring heralds a new beginning for the midwife-in-training Nancy: she’s now a full midwife. Her uniform is laid out and ready to don—but it gets covered in plaster when dry rot in the ceiling above her bed causes a collapse. She’ll have to sleep in Trixie’s room for now. Luckily, Matthew Aylward’s continuing support of Nonnatus House means the sisters have money to fix the ceiling.

Matthew is engaging in some other construction nearby, demolishing some of the slums owned by his family to make way for better housing. Beneath the floorboards of one building lies a horrible secret: the skeleton of an infant, wrapped in a blouse. Trixie is with Matthew when the bones are discovered, and is traumatized.

The police begin to try to learn the identity of the infant. They visit the maternity clinic to peruse their records, suspecting the skeleton might date from a time when the building housed unmarried nurses during the war.

The Flemings are doing their own sort of investigation into the past. After Audrey gave birth to a baby without full legs who didn’t survive the night, and her husband Derek had part of his stomach removed due to a hemorrhage, Dr. Turner began to suspect that Derek and his fellow Navy mates had been exposed to radiation during nuclear tests, despite the denials of the government. The Flemings have been gathering information on those men and their children and their ill health, but now Audrey is due to have another baby. When Sister Julienne visits her at home after she breaks down at the clinic out of fear for her baby’s health, Audrey passes off the information she has collected so that she won’t have to think about it.

Shelagh offers to collate the mess of papers on the nuclear tests—all her children are currently stuck at home with chicken pox, so it will give her something to do. Sister Francis has also caught the pox, which leads to a quarantine and a check on the people with whom she has been in contact. Nancy is frustrated that she doesn’t know whether her daughter, Colette, has had chicken pox before, since Colette has been living in an orphanage and now with foster parents.

Nancy longs to be Colette’s mother in full, and decides to tell her daughter the truth. I’ll work hard and save up so that we can have a home of our own soon, she promises Colette.

Marigold Nyall and her mother have a comfortable home of their own, but her mother has begun to suffer from dementia and incontinence, an especially embarrassing affliction for a family obsessed with respectability. Nurse Crane visits and has Lucille drop off incontinence pads later when she is on her way to help another mother in the building give birth. Her patient, a Gujarati woman is nervous and doesn’t speak English, but Lucille comforts her through the birth with a few words in her own language.

The detective leading the inquiry into the infant skeleton has determined that it predates the use of the building as a nurses’ home, from an examination of the floorboards and newspaper underneath them. She is questioning women who lived there around 1936 or 1937, which includes the Nyalls. Since Marigold was once in a mental institution for severe depression, Dr. Turner requests that Nurse Crane accompany the detective.

Marigold eventually admits that she and her mother are responsible—and that there is another infant skeleton, hidden behind the chimney flue. No one but she and her mother knew; her mother was a respectable widow, so couldn’t let people find out that she had two illegitimate children, even if they died at birth.

Nurse Crane tells the detective that she noticed a C-section scar on Marigold’s mother while taking a urine sample and suggests that they consult Dr. Turner and his records. Marigold is her mother’s only child; she had a hysterectomy after Marigold’s birth. The deceased infants must be Marigold’s. Marigold cries while she admits it.

Marigold had an “arrangement” with a married man who took advantage of her for years—it’s him they should be investigating, she says. When asked if either child breathed upon birth, Marigold breaks down before eventually explaining that neither made a noise after their cord was cut.

The detective assigns a psychiatrist to Marigold. She is declared unfit to stand trial, and released without charges, despite the existence of an antiquated law that would have sent her to prison. When Marigold’s two children are buried, Matthew and Trixie visit the grave to leave flowers.

Audrey Fleming fears that Derek will go to an early grave, given the amount of cigarettes he smokes. Dr. Turner encourages him to quit, sending him to a new class led by Sister Hilda on the effects of smoking. Audrey convinces Derek to quit; she needs him around to help raise their coming child. He stomps his pack of cigarettes into a puddle.

When Audrey goes into labor it’s a long one; the baby needs to shift position. Once it finally does, everything goes well, and a healthy daughter is born, to Audrey and Derek’s relief and joy.

It’s a celebratory time: Reggie’s birthday falls on the day of the Eurovision Song Contest, which Nancy has hyped up for Sister Monica Joan by introducing her to Top of the Pops. Sister Julienne dismisses it all as frivolity, but when the Buckle television breaks on the day of the contest, she allows Reggie’s party to move to Nonnatus House, to everyone’s delight. It’s even better than Easter.