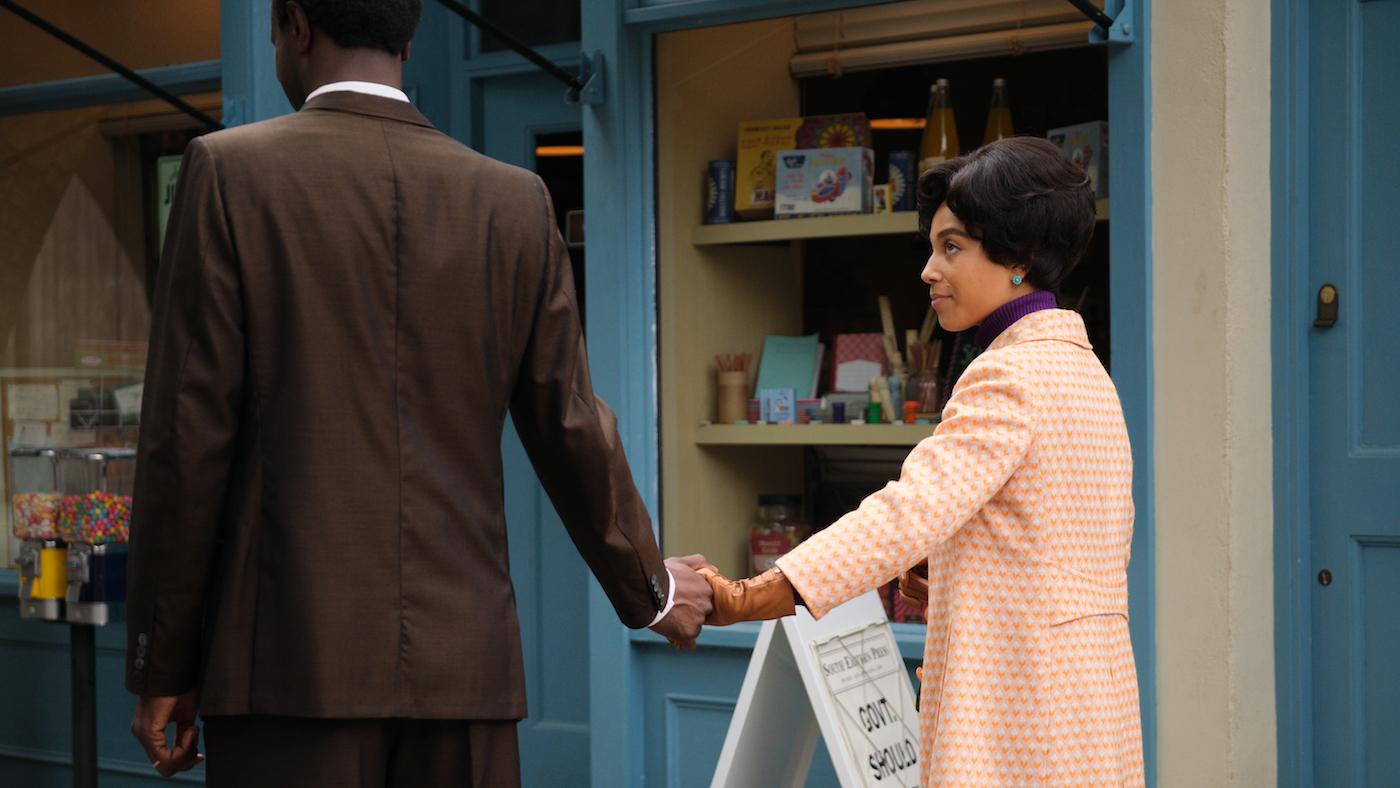 Cyril and Lucille are trying to reconcile their plans for the future. Photo: Neal Street Productions

The midwives often offer support far beyond care surrounding birth. While Trixie has delivered one of Glenda Packer’s children, Deborah, she’s now at the Packer apartment for Glenda’s husband Gordon. He fell from a crane at work and is now paraplegic. He hasn’t completed his rehab or learned how to take care of his catheter yet, but he came home early rather than being sent by the hospital to a long-term facility. Glenda figures she can manage—with Trixie’s help.

But the elevator in their building is broken and it’s difficult for Gordon to maneuver in his wheelchair in their small home. Trixie is upset at the situation but tries her best to help, offering the Packers the chance for home help or a social worker. Glenda especially dislikes the idea of the second possibility. When Trixie discovers bruises on Gordon’s back from what he says was a fall taken while getting into his wheelchair, she boils over and berates the local council for not providing Gordon with better care.

Shelagh is also frustrated with the council, for not maintaining playground equipment. Mae has gashed her ankle on a rusty bolt there, leading Shelagh to take matters into her own hands and begin a fundraiser via the donations of goods to improve the playground.

Sister Hilda is also concerned with the wellbeing of the area’s children: a teacher has told her that several girls have been frightened by the onset of their period. The available educational materials and classes are for older girls, so Hilda asks Sister Frances and Nancy, being closer to the girls’ ages themselves, to lead a class at the school.

Terry Heslop enjoys learning about biology. He wants to be present for his wife Pamela’s delivery, but she must give birth in the maternity clinic, since she is older—she already has two children from another marriage. When she has heartburn, Terry calls Lucille to check on her, despite Pamela’s protestations. Pamela is fine, and sends Terry off to work.

Pamela works from her home as a bookkeeper—it’s how she met Terry. She needed a job where she would be around to raise her children, so she went to night school. Lucille is having similar thoughts now that she’s pregnant, as she explains to Nurse Crane. She’s going to train as a health visitor, so that she can still use her skills but have more predictable hours when she has a child of her own.

Cyril is also thinking of the future, and has another interview for a job. But he’s upset when Lucille reveals her plan without having discussed it with him, and they get into an argument that leads to him walking out. When he finally returns in the morning, he finds a letter waiting: he got the job. He quickly picks some flowers and brings them to Lucille, apologizing and telling her the good news.

Nurse Crane has received her own big news, although she’s not sure it’s good. She has won five thousand pounds from a premium bond her mother bought for her years ago. But she has saved for so long on her own, and never had enough money to want for extra things, that she’s struggling to adjust to the vast sum. Miss Higgins encourages her to take advantage of her fortune, and she decides to ask Sister Julienne for a vacation to take a motor coach tour through Europe. She has rarely used her time off, and has six weeks available, so Sister Julienne okays it—although she’s a bit worried about staffing.

Sister Frances and Nancy receive a worrying anonymous query via the question box they leave for the girls to whom they taught sex education: how do you tell child protective services? Deborah Packer eventually admits to her teacher that she wrote it. Her mother, Glenda, disciplines her and her brother with a dog leash.

Dr. Turner finds instances of injuries in the Packer children’s files that retrospectively could be signs of abuse, and when Trixie learns about the report she realizes that Gordon’s bruises probably also came from Glenda, not falling. Trixie accompanies a police officer to the Parker apartment, where Glenda begins screaming and picks up a chain dog leash while her son covers his ears. Gordon comes out of this bedroom in his wheelchair and points out that they don’t have a dog.

Part of the reason Gordon left the hospital early, other than Glenda’s urging, was because he didn’t want to leave the children alone with her. Now he determines to work on his rehab so that he can keep his children safe and provide for them without Glenda, who moves into a hostel. Dr. Turner promises to help him get a ground-floor apartment and more help from the hospital with his recovery.

Trixie explains her anguish at the case—and her own difficult childhood—to Matthew, with whom she has occasionally begun spending the night. He tells her he loves her. But their relationship must pause: Trixie’s godmother is dying of cancer in Italy, and Trixie decides she must go support her through it. Matthew tells her he will join her if she needs but Trixie tells him she will be back; he can keep Poplar warm for her.

While Pamela Heslop is in labor, Terry asks too many questions, and Lucille sends him out of the room. Lucille notices blood when she uses the restroom, but must return to Pamela before she can do anything about it. When a healthy daughter is delivered, she cries, and then calls Nurse Crane, who takes over Pamela’s care and makes Lucille rest.

But Lucille must again return to the restroom; the bleeding is getting worse. She is miscarrying, she tells a weeping Crane through the door. After it all, Crane calls her an ambulance—she’s bleeding more than she should—and Cyril.

When Lucille wakes in the hospital, she tells Cyril she thought she would have an easy time with pregnancy, given all her training—but she couldn’t do anything to stop the miscarriage. He comforts her, telling her she can’t be an expert all the time.

Another frightening incident occurs when some boys bring donations to Fred for Shelagh’s fundraiser. He sends them along to a collection point at Nonnatus, where Sister Julienne later notices that they have dropped an unexploded mine—they thought it was a toy. At the same time, they bring more mines to Fred in his store.

Fred draws on his military training and takes charge. The army comes in and safely extricates and explodes the mines. No one is hurt.