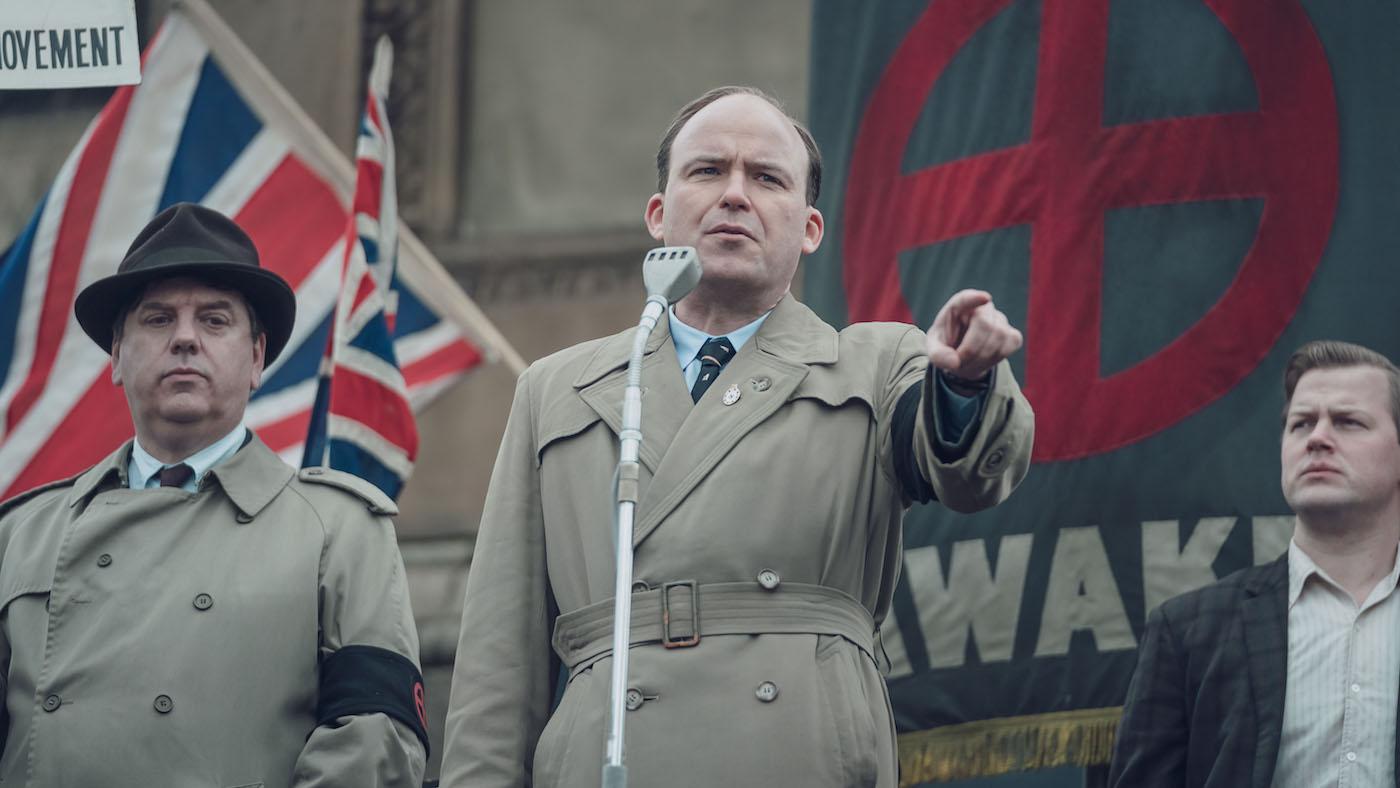 Colin Jordan and his National Socialist Movement did hold a rally in Trafalgar Square that led to a riot. Photo: Red Production Company and Masterpiece

Ridley Road airs Sundays at 8:00 pm on WTTW and is available to stream. WTTW Passport members can stream the entire show now. Find our recaps here.

You might find yourself wondering while you watch Ridley Road: was there really a prominent neo-Nazi movement in England only seventeen years after Hitler was defeated in World War II? Believe it or not, there was. Here’s a rundown of some of the real history featured in Ridley Road.

Not only was there a resurgent fascist movement in England in the 1960s; there was one during and immediately after World War II. Oswald Mosley, an erstwhile member of Parliament, founded the British Union of Fascists in 1932. He was arrested in 1940 and the BUF was banned, but he was released in 1943 and revived his movement.

In 1946, a group of 43 British Jews that included veterans of the war founded the 43 Group to oppose Mosley and the BUF by carrying out raids and disrupting meetings, including at a market on Ridley Road in London. Non-Jewish allies infiltrated fascist organizations, and some London cab drivers provided support—just like Soly Malinovsky in Ridley Road. “We decided we had to out-fascist the fascists,” a 43 Group veteran told The Guardian decades later. 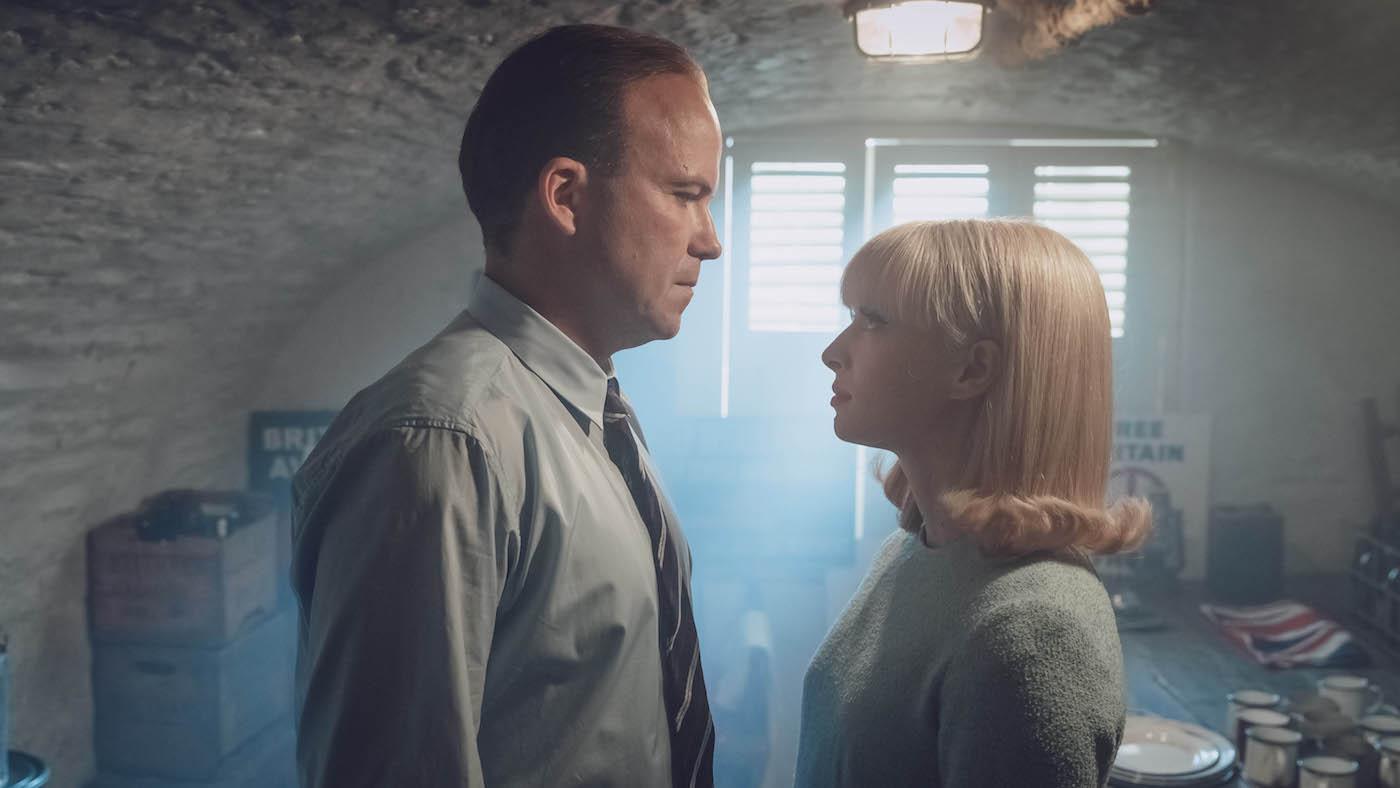 Colin Jordan was a real person who founded the National Socialist Movement and was arrested for having a paramilitary. Photo: Red Production Company and Masterpiece

Mosley moved abroad in 1951, but fascist movements began to again emerge in England later that decade. Colin Jordan, inspired by the ideas of Arnold Leese, who found Mosley too tame, formed various nationalist and racist groups in the 1950s before joining another group to found the British National party in 1960. Two years later, he and John Tyndall broke off to form the National Socialist Movement, on Adolf Hitler’s birthday.

The NSM did in fact have a paramilitary group named “Spearhead,” as in Ridley Road. Its existence sent Jordan and Tyndall to prison in late 1962. After that, Jordan was frequently seen in court and again spent time in prison for peddling racist literature. He was publicly embarrassed in 1975 when he was fined for shoplifting three pairs of underwear from a supermarket. He died in 2009.

Jordan’s NSM had its high point, according to The Guardian, at a rally in Trafalgar Square in July of 1962—just like the one depicted in episode 1 of Ridley Road. (Even the banners behind Jordan, played by Rory Kinnear, and his outfit at the rally in the show as seen above are accurate.) A crowd of 5,000 people attended—some 800 supporters of the NSM, the rest opponents. The police arrested the speakers after a riot broke out.

During the 1960s, NSM supporters instigated at least 34 arsons against Jewish buildings in London, according to The Guardian. A 35th, at a theological college, killed a student, as in Ridley Road. While some have argued that that arson was connected to the NSM and shared characteristics with the other attacks, no charges were brought and the coroner recorded the student’s death as “accidental,” just as in Ridley Road.

The NSM was re-formed as the British Movement in the late 1960s, which has continued to exist in various forms until the present. 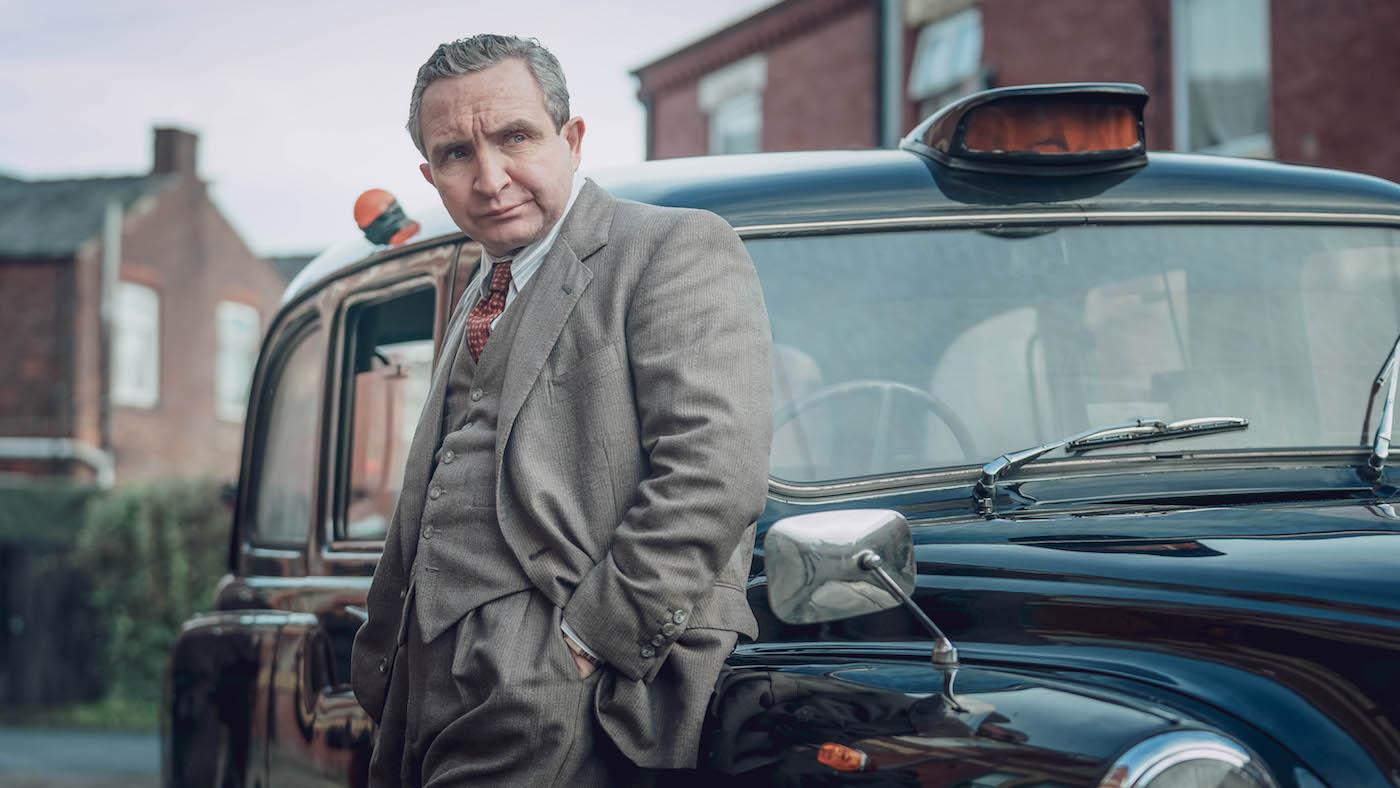 Soly Malinovsky was based off Wally Levy, who supported the real-life 62 Group fighting against fascism. Photo: Red Production Company and Masterpiece

When the NSM began gaining public notice, members of the Jewish community again decided to form a group to militantly oppose fascism in England. Among them was Wally Levy, the owner of London’s largest black cab business, who inspired the character of Soly Malinovsky in Ridley Road, as show creator Sarah Solemani wrote in The Guardian. Rabbi Leslie Hardman, who saw the concentration camp at Bergen-Belsen firsthand during the war, supported the group—he’s the inspiration for Rabbi Leslie Lehrer in Ridley Road. The 62 Group included women, too, like Vivien Epstein and Nancy Malinovsky in the show. They did infiltrate and wire-tap fascist organizations.

Dior was the daughter of a left-wing journalist and the niece of the French Resistance fighter Catherine Dior, who was captured by the Gestapo and imprisoned in several concentration camps and prisons. The fashion designer Christian Dior was an uncle. Françoise became a supporter of Jordan and the NSM after the Trafalgar Square rally, and became engaged to Tyndall in 1963 before instead marrying Jordan that year. She wore a jeweled swastika at the wedding; protesters pelted the couple with rotten apples and eggs, according to a contemporaneous report in The New York Times.

They had another marriage ceremony at NSM headquarters where they cut their fingers and mixed their blood. The marriage only lasted until 1967. Dior was arrested after being tied to an arson by members of the 62 Group. She died in 1993. 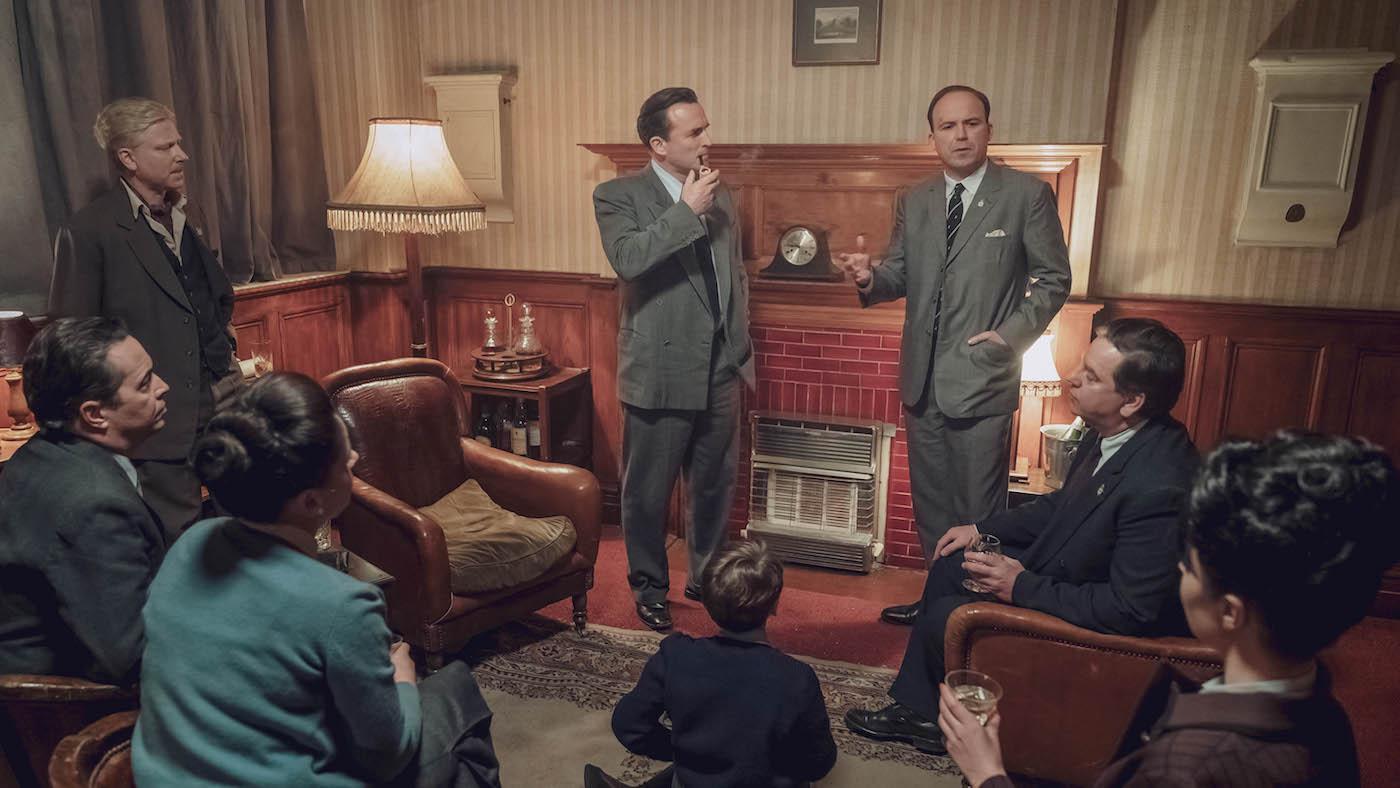 George Lincoln Rockwell did visit England for a conference of fascists, despite being banned by Britain from traveling there. Photo: Red Production Company and Masterpiece

The founder of the American Nazi Party did indeed visit England in 1962, to attend a conference of international fascists hosted by Colin Jordan. Jordan was elected leader of the World Union of National Socialists, and Rockwell his deputy. Britain tried to prevent Rockwell from entering the country and eventually deported him.

He was born in Bloomington, Illinois, served in the Navy, ran for president of the United States and governor of Virginia, and founded the American Nazi Party in the late 1950s. It had about 30 members in 1962, according to The New York Times, and was headquartered in a house in Arlington, Virginia provided by a rich supporter just like Jordan’s NSM in Ridley Road. (The idea of a noble backer of the NSM was inspired by the 12th Duke of Bedford, who supported British fascists in the period surrounding World War II.) Rockwell led a counter-protest against Martin Luther King, Jr. in Chicago in 1966 and was killed by a banned member of his own party the next year. A decade later, neo-Nazis tried to march in Skokie, setting off a national uproar and court battle. 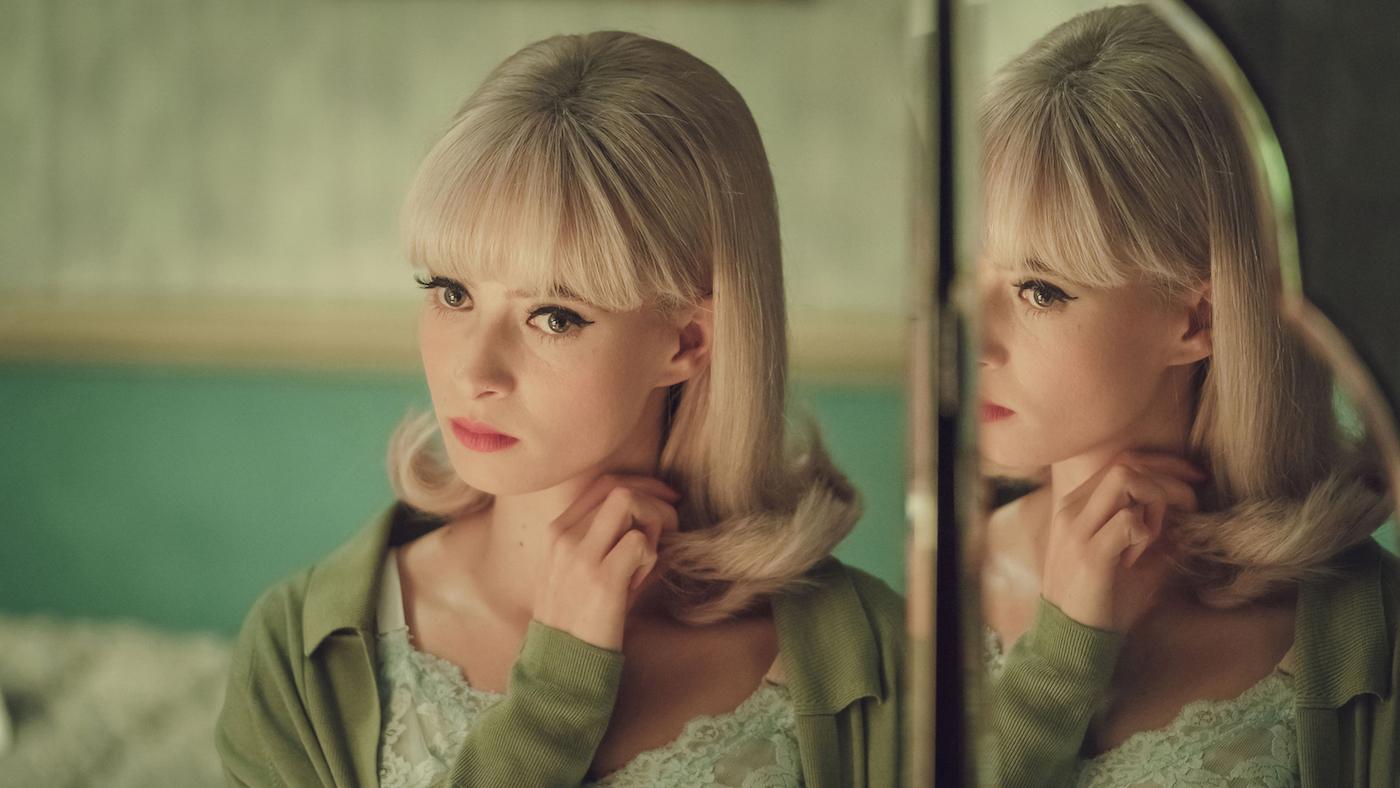