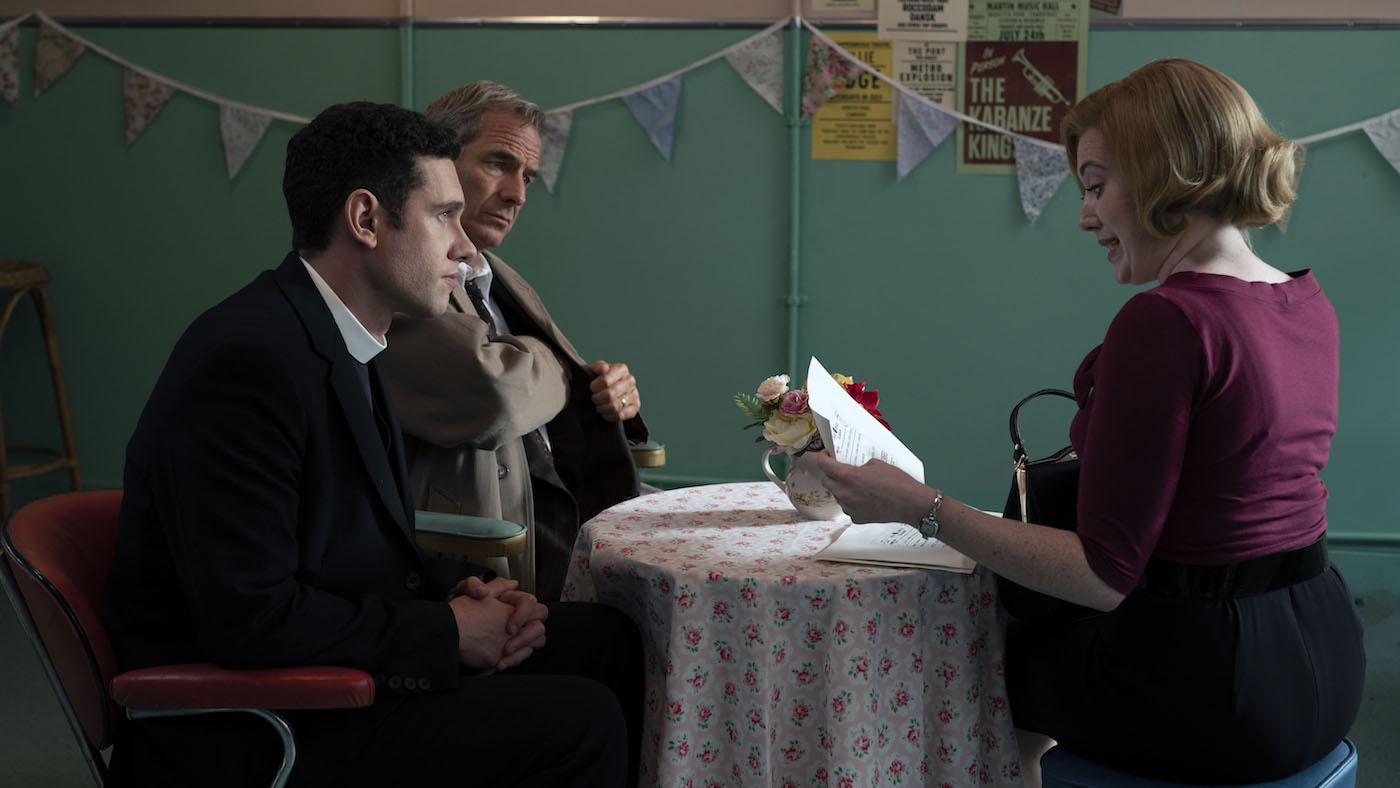 Geordie's new boss is a stickler for rules, so he, Will, and Miss Scott must meet in Leonard's new cafe to surreptitiously discuss a case. Photo: Kudos Film and TV Ltd

Geordie is living at the vicarage, trying to grow Cathy’s favorite flowers for her in an attempt to win her forgiveness after she has kicked him out. Since he lives with Will, he goes with him to a jazz club one night but leaves to go work when Will begins dancing sensually with a woman there. She runs home early, leaving Will smitten with a kiss but without a name or number.

That means Will is up and aware enough the next day to help Geordie entertain his children on his day with them. The Fitzgerald estate has opened its pool to local children, so Geordie and Will take the kids there.

Adele Fitzgerald is soon to be married; her sister Maude is less sunny and spends the day keeping children away from her gardens. Soon she is calling for help: a man is dead in her shed.

He appears to be homeless, and seems to have fallen into a brick wall that collapsed around him. Geordie’s new boss arrives and assigns Larry to the case, dismissing Geordie since it’s his day off.

But Geordie is suspicious, even after the cause of death is ascertained as a heart attack. It turns out that the man is Edmund Fitzgerald, Maude and Adele’s brother, who has been wasting the family fortune abroad ever since the war—the Fitzgerald money goes only to men, who have also typically had weak hearts. Miss Scott helps Geordie look into the case by asking a friend at the post office to pull any recent telegrams from Edmund.

Edmund had planned to return for the wedding: he wired his sisters back in January and asked for money for airfare, but they didn’t have the funds. Their estate is disintegrating since he squandered their fortune.

The Fitzgerald money will now go to Adele’s fiancé, Howard: he’s a fifth cousin. Mrs. C suggests that Geordie and Will look into Irene Gibbons if they think there was foul play around Edmund’s death: she was let down in a relationship by Edmund. A love letter found in his pocket upon his death was from Irene, dated years ago.

Irene explains that she and Edmund were as good as engaged until he went off to the war. She wrote all the time, but he never responded until the war ended, and then he cut off their relationship, disappearing from England.

Edmund was seen crossing the field between the Gibbons home and Fitzgerald estate before his death, so Geordie and Will search it—and find his backpack. Inside, there’s a first class train ticket bought in Mayfair, which is where Adele’s fiancé Howard lives.

Geordie and Will have to discuss the case surreptitiously, given Geordie’s boss’s disapproval of meddling, so they meet at Leonard’s soon-to-be-opened beat poet café, which he is running with help from an investment from Jack. Mrs. C has imposed her own decorations over Leonard’s vision, and she gets upset when he disagrees with her.

Miss Scott has found more information about the Fitzgeralds’ telegrams. Edmund had also telegrammed Irene Gibbons, telling her he still had the ring if she was interested, and she responded yes. He never replied. Irene also tells Will and Geordie that she never sent the letter he had from her. She kept it in her jewelry box, which he had made for her. Inside the jewelry box there is now a ring for her.

Geordie figures it out: Edmund came to her house and climbed through the window as he did when they were young, but she wasn’t there so he left the ring in the jewelry box—and found and took the letter. He was interrupted by the return of Irene’s father. Irene then came home and saw her father struggling with someone, whom her father said was a homeless man and sent away—she couldn’t see Edmund well enough to recognize him.

Irene’s father didn’t like Edmund. A handyman, he felt that Irene would be ridiculed if she married into an aristocratic family. He stopped the young lovers’ letters from reaching each other during the war.

He had set up tents for the pool party at the Fitzgerald estate the same day he encountered Edmund—perhaps he hid the body in the tents and brought it to the estate. But a neighbor confirms that they heard Irene scream when she saw her father’s struggle—and it was after he set up the tents.

Adele is not as in love with Howard as Edmund was with Irene: she and her sister and she need money, and Howard is at least kind. They got engaged in March—but Edmund’s telegram about the wedding was in January. He was talking about his own. Miss Scott also discovers that Adele did reply to Edmund’s telegram, just from a different post office. She offered congratulations and a ticket home, then sold a painting to pay for the ticket and went on to convince Howard to marry her.

But why did she wait until June for her wedding and to have Edmund return home? That’s when Maude’s hemlock—a poisonous plant—would be ready. The sisters knew Edmund would evict them from their home once he was married, so they brought him home and poisoned him. Since he was bruised from his encounter with Irene’s father, they pretended he had collapsed into a brick wall.

Maude was planning to go even further. Howard is the last male of the Fitzgerald line. If he were to die after Adele married him—from a hemlock-induced heart attack—Adele would receive the fortune. Maude and Adele are arrested.

Taking advantage of his success in the case, Geordie tells his new boss he wants to look into the deaths of the vagrants. He and Will also meet the boss’s fiancée: it’s the woman whom Will danced with at the club. Worse, she has already tracked down Will at the vicarage and slept with him, leaving him with a name this time—Maya—but otherwise saying they can’t be together. Will is infatuated.

At the opening of Leonard’s café, which Mrs. C has allowed him to decorate as he sees fit after acknowledging his passion for the project, Geordie finally brings Cathy the flowers he’s been growing for her. But they’re not her favorites, and he’s always late picking up the kids and then sending them home with dirty clothes. He’s too self-involved to appreciate Cathy’s time and efforts.