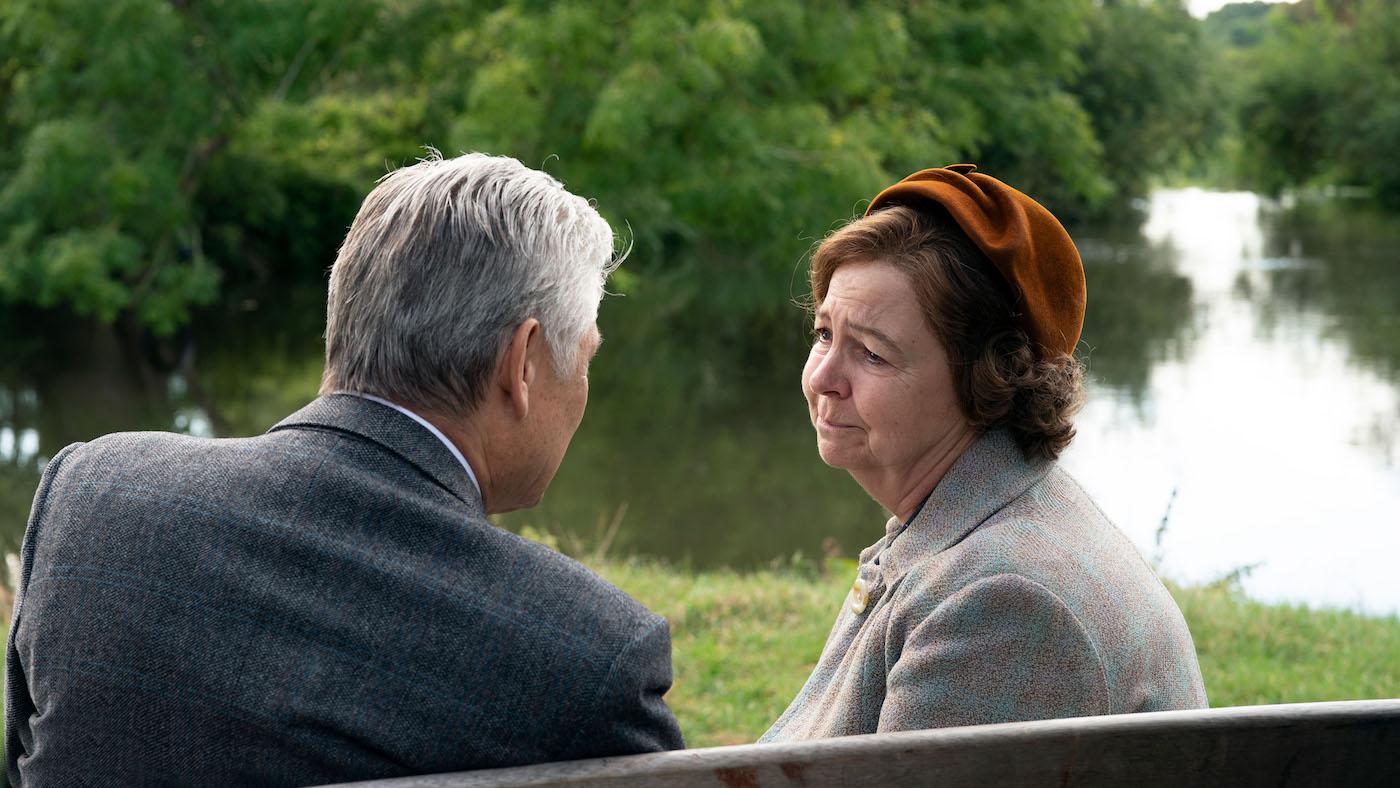 Mrs. C finally tells Jack why she has been irritable and aloof. Photo: Kudos Film and TV Ltd

Will’s congregation is tight-knit and loves gossip—especially the ladies organizing a charity auction for refugees, with Daniel’s help. Mrs. C has promised twelve cakes for the event tomorrow and failed to deliver, they all tell Will. And Bonnie’s arrival to speak with him sets them all atwitter. She tries to help him as he bakes Mrs. C’s cakes, but he keeps burning them.

Perhaps there is something to the gossip: Will tenderly wipes flour off Bonnie’s face. But she’s there to try to save Cathy and Geordie’s marriage, since they’re both miserable. She and Will hatch a plan.

Will runs into Mrs. C working at Leonard’s café when he brings the young Jim Baker to speak to Leonard about being a vicar—after the arrest of Jim’s friend Robin, Jim is ready to become a priest, an occupation Leonard misses every day. Will chastises Mrs. C for working at the café while neglecting the vicarage, and she tells him she’s on hiatus because she has lost her faith.

So Will must bring Leonard’s baba ghanoush to the auction instead of Mrs. C’s cakes—but there’s a far worse surprise in store. Neil Hughes, an electrician and the wife of Grace, an organizer of the auction, is dead behind the curtain in the village hall. He didn’t come home last night, Grace says, but he often slept in his van when he worked late.

Someone seems to have tried to break into Neil’s van: there are scratches near the handle and a hammer nearby. Inside, Geordie finds risqué photos of another lady involved with the auction, the widow Kathleen Wilson.

Kathleen admits that she was having an affair with Neil, but hadn’t seen him since he took the photos. After the women left the hall the previous night, she returned to try to get the photos from Neil and found him dead. She took his hammer and tried to break in to the van but couldn’t.

The hammer wasn’t the murder weapon, however: even though it appears that Neil fell off a ladder and hit his head, there is blood and hair on the corner of his toolbox.

He had a recent arrest, for stealing a wallet at the cricket club. Natalie Benoit, another woman from Will’s church, works there. She’s the one who reported Neil, but it turned out to be a misunderstanding. She had been lodging with Neil and Grace but moved out after the incident.

Inside Neil’s locker at the club, Geordie finds an envelope addressed to Neil that’s full of jewelry. When he returns to the auction, which has continued in spite of Neil’s death, he surreptitiously compares the handwriting on bids to that on the envelope, while Will pockets a bid for his coffeemaker, which Mrs. C has spitefully brought as a “donation.” Geordie matches the handwriting to Eleanor Ingram, the fussy head of the auction. Daniel, a photographer, meanwhile tells Will that Neil probably has more photos of Kathleen, given the number of photographs on a roll of film.

Eleanor admits that she gave Neil the jewelry because he paid off her entitled husband Adam’s gambling debt. Their marriage is not happy, and having to give away her mother’s jewelry to clean up her husband’s mess doesn’t help.

Will and Cathy’s marriage remains strained, too, despite Will and Bonnie’s contrived romantic dinner between the two of them and gift of a necklace “from” Geordie. Will and Bonnie finish a bottle of wine on their own when Cathy and Geordie both storm out. They kiss after leaving the restaurant, but Will tells Bonnie she’ll regret sleeping with him. She gets angry, accusing Will of viewing her as just another “widow to be vicared.”

The next morning, Mrs. C is waiting for Will at the vicarage, along with Jack and their friends. Leonard has insisted that she tell them about her cancer. Jack is upset that Mrs. C told Leonard but not him, and she explains that she couldn’t bear to put him in distress. He responds that he wishes he had the cancer instead of her.

Geordie has a realization: Neil was blackmailing Eleanor. He asked her for sex in return for paying Adam’s debt, then kept asking for more. She tried to pay him off with the jewelry. But she didn’t kill him—his wife Grace arrives at the police station and claims that she did.

She knew what he was doing to Eleanor, and that he had had numerous other affairs. Then she saw his photos, which he took to show his friends, and decided she had to end his predation. He was on a ladder at the hall, fixing a light, when she confronted him. She got so angry that she can’t remember what she hit him with, but she finally felt happy.

Except the ladder is too short to reach the light. Geordie and Will search for the rest of Neil’s photos, and finally find them in the toolbox that killed him. They’re not of Kathleen, but Natalie.

The young student tells Will and Geordie that Neil forced himself on her while she lived with him. She tried to contrive an arrest for him at the club to stop things. Grace knew she had to watch Neil as Natalie lodged with them, and when she realized what happened she found Natalie somewhere else to live.

Neil approached Natalie at the hall while she was hanging bunting, after everyone else had left. She slammed his head with the toolbox when he stroked her leg, killing him. Grace figured out what had happened and decided to confess out of guilt for not protecting Natalie.

Will feels guilty for not knowing more about his congregation and better protecting them. But he can at least comfort Mrs. C for now, who comes to him for a long hug. 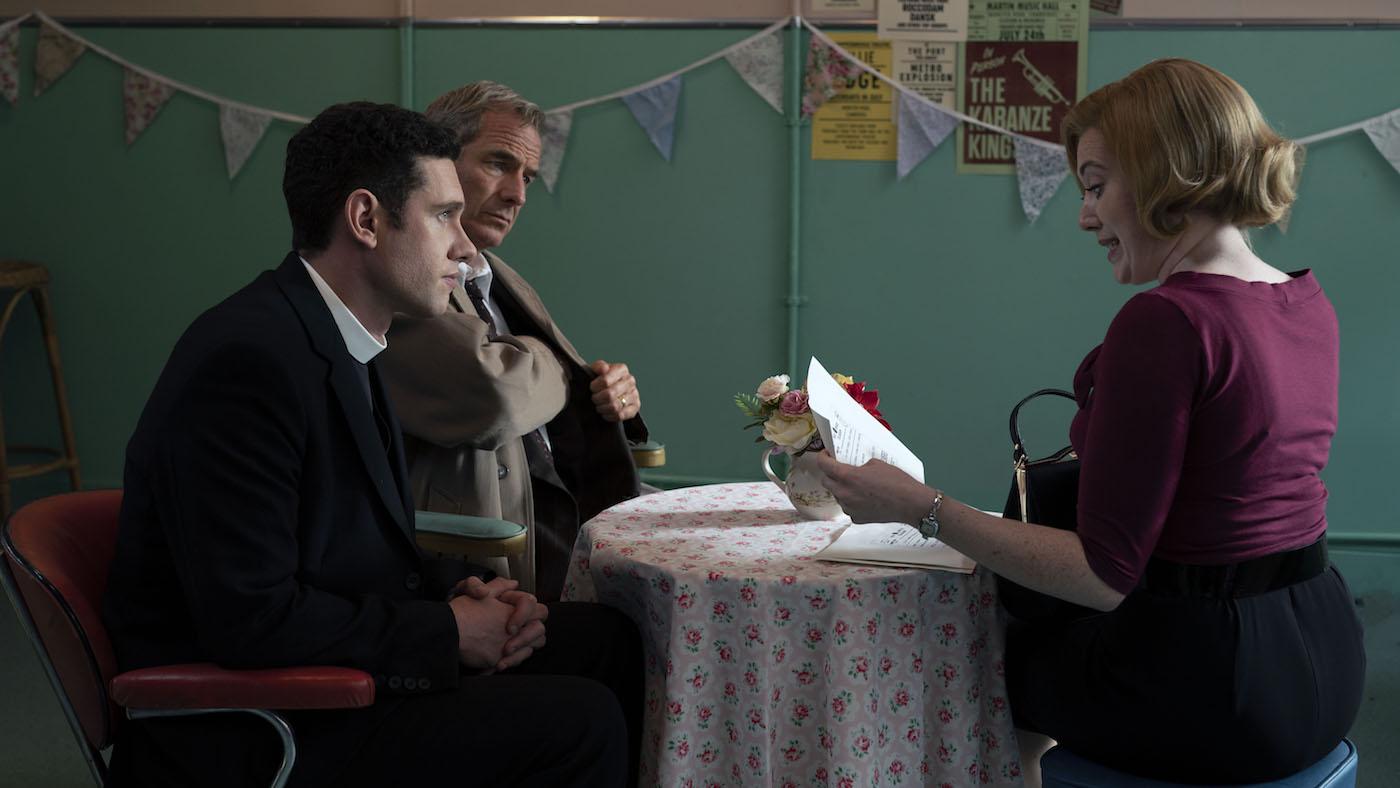