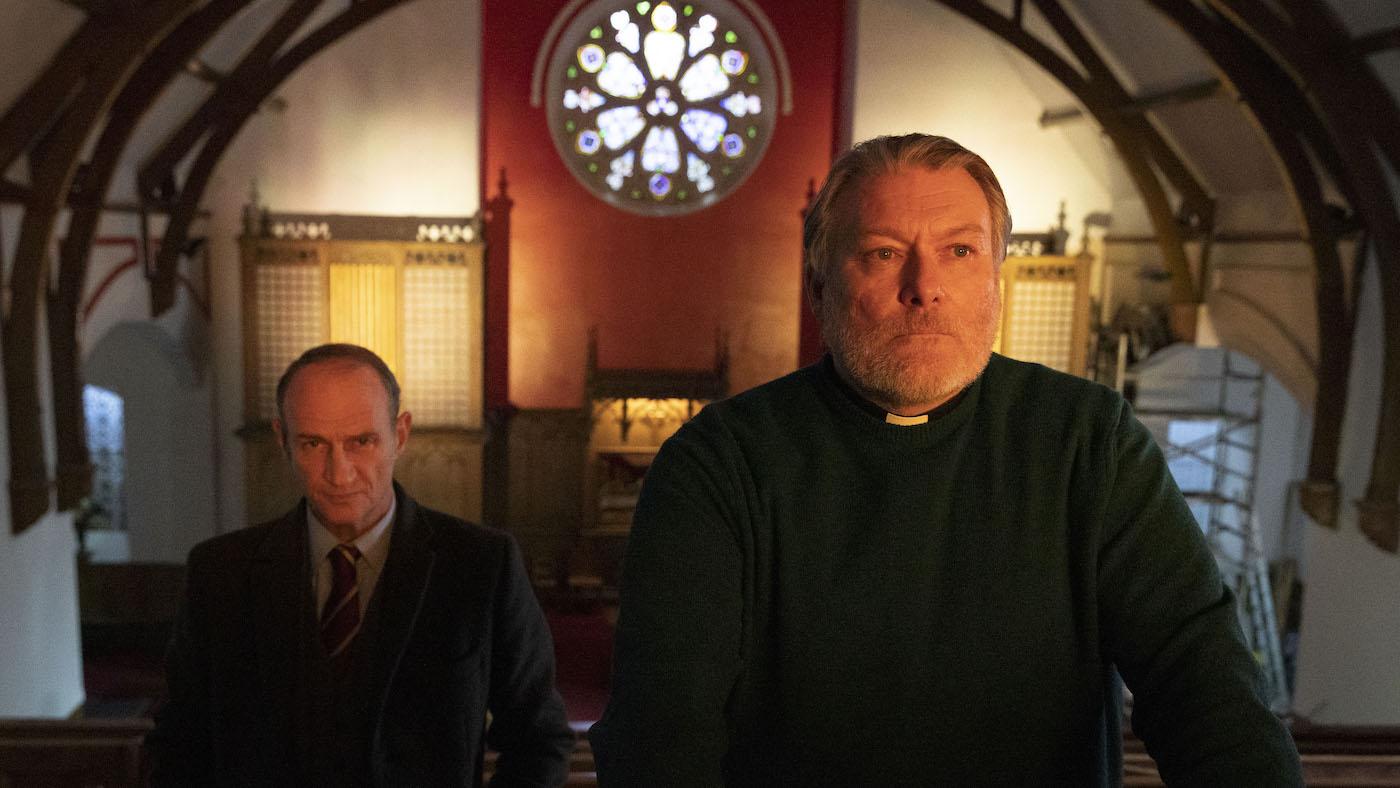 Sandy is in the way of a large development that Roy wants finished. Photo: Expectation/Happy Tramp North

Guilt airs Sundays at 8:00 pm and is available to stream. Recap the previous and following episodes and the previous season.

So where did the bag of money that led to Adrian’s death and Max’s reinvolvement with Roy Lynch come from? A company called Phoenix is constructing a large development in Leith, and an upstart firm was eager to win a contract but was rejected because they couldn’t match the large companies’ prices. So the go-getter leading the small firm decided to grease some hands with his savings, dropping the tracker from his dog’s collar into the bag of cash just in case.

He left the bag in the trunk of Joe, the man who killed Adrian—and was killed by Erin. Joe brought the money with him to a private club to do some gambling. Adrian, there to net drugs from one of the employees, noticed the cash and stole off with it when Joe went for a cigarette, with the help of his dealer employee. When Joe returned, he made the employee share Joe’s address. We know what happened next.

Joe’s family doesn’t, though—and they don’t believe that Joe committed suicide, as Roy’s men framed his death. Joe’s father thinks Joe wouldn’t have died if his brother Teddy had been there—he just got out of prison—but now Teddy can look into the death and take care of things.

And who is helping Max gain revenge on Roy? A policewoman named Jackie. She’s worried that she no longer hears about Roy’s criminal dealings—he claims he’s gone legit—and so she needs Max to record his interactions with Roy. They can start with the money laundering Roy asked Max to do for him, and they’ll find something bigger from there to nail Roy with..

Max decides to keep pulling at the strand of Erin to see if he can learn more about Roy’s dealings. He watches as Yvonne follows up with Erin on Adrian’s missing persons report, then follows Erin and sees her visit Roy. She tells her father that a detective visited her.

Back at Leith Legal, Max and Kenny get their first client: a woman who wants a will, so that her cat will be taken care of. Kenny is overjoyed, and pitches Max on a chain of cheap legal offices. They could make better lives for themselves.

But Max has set his sights higher. He convinces Kenny to take their cut of money from Roy for laundering the cash to take out a mortgage. But first, they have to get the bag back.

Kenny knows the minister who picked up the bag: his name is Sandy, and he was once called “Leith’s Billy Graham.” He helped Kenny out at a food bank during one of Kenny’s rock bottoms; he deserves respect, Kenny tells Max. Kenny himself has already tried to retrieve the bag, warning Sandy of the danger it will bring, but the tough Sandy’s not worried. And when Max tries to talk to him, Sandy dismisses him outright.

Sandy’s church happens to be in the way of the big Phoenix development: he was the intended recipient of the bag of cash, as a way for the small firm vying for a contract to prove itself by getting him to sell and allowing the development to go forward. Sandy had no qualms taking the bribe, but won’t give up the church.

Max is astounded by the size of the development and decides to look into Phoenix. It’s a bunch of shell companies, leading nowhere.

That’s because Roy is hidden behind it all. He knows Sandy from before he was a priest—they grew up in the old, hardscrabble Leith. He tries, and fails, to convince Sandy to sell. The development is his life’s work, he tells Sandy. He wants to build over the ghosts of their past lives. He wants redemption.

If things go right, his wife Maggie tells Roy, then he’ll get back all the things he had to give up so that she didn’t have to—including their daughter Erin.

But Erin hates her father and his work. She has always believed her mother separated from him and had no contact—until she showed up unexpectedly at her mother’s retirement community and spotted Roy leaving. She doesn’t mention it to her mother.

Yvonne is also playing a double game. She has admitted to Kenny, with whom she’s developing a romance, that she is a cop. But she’s suspicious of her superior, Stevie, and the mistaken police report he filed about Adrian. He scolds her for following up with Erin and makes clear to her that she shouldn’t ask any more questions, reminding her that she owes her job to him. When they were both up for a promotion, he noted her drinking problem, preventing her from getting the promotion—but then withdrew his complaint so she wouldn’t be fired.

Nevertheless, Yvonne reports her suspicions to the chief, who sends her to Jackie—Max’s contact. Jackie operates outside the police station, and asks Yvonne to watch Stevie and see if he visits any of a list of addresses. Jackie believes Yvonne is driven by revenge, but Yvonne insists she just wants to expose corruption.

Yvonne checks out the addresses on Jackie’s list. The Leith Legal office is one.

Teddy has come to Leith Legal for help. He knows Max from prison. Max helped him with his legal case and also lent him books to read. Teddy also notes to Kenny that Max had a lot of visitors at the end of his sentence—perhaps that included Jackie, not that either Teddy or Kenny would know her.

Teddy wants Max to look into Joe’s death. He hands over a photo of Joe and a membership card to the club where Adrian took the bag of cash—it was in Joe’s pocket. After Teddy leaves, Max tells Kenny to pretend to look into it and get back to Teddy in a week. Teddy, who has anger problems, is the only person in prison Max feared.

Erin also decides to go to Max for help. She calls him and then leaves her house with him to talk somewhere more anonymous. Jackie, on surveillance duty, watches them leave.

Erin tells Max she is Roy’s daughter, shocking him. She knows Max is working against her father—and she wants to help him.

Max stops surreptitiously recording the conversation for Jackie. He and Erin get drunk and close down the bar as they discuss how to find something that Roy values so that they can take it away from him—just like he did to Max. They return to Erin’s house together and she invites Max in. Jackie watches from her car.