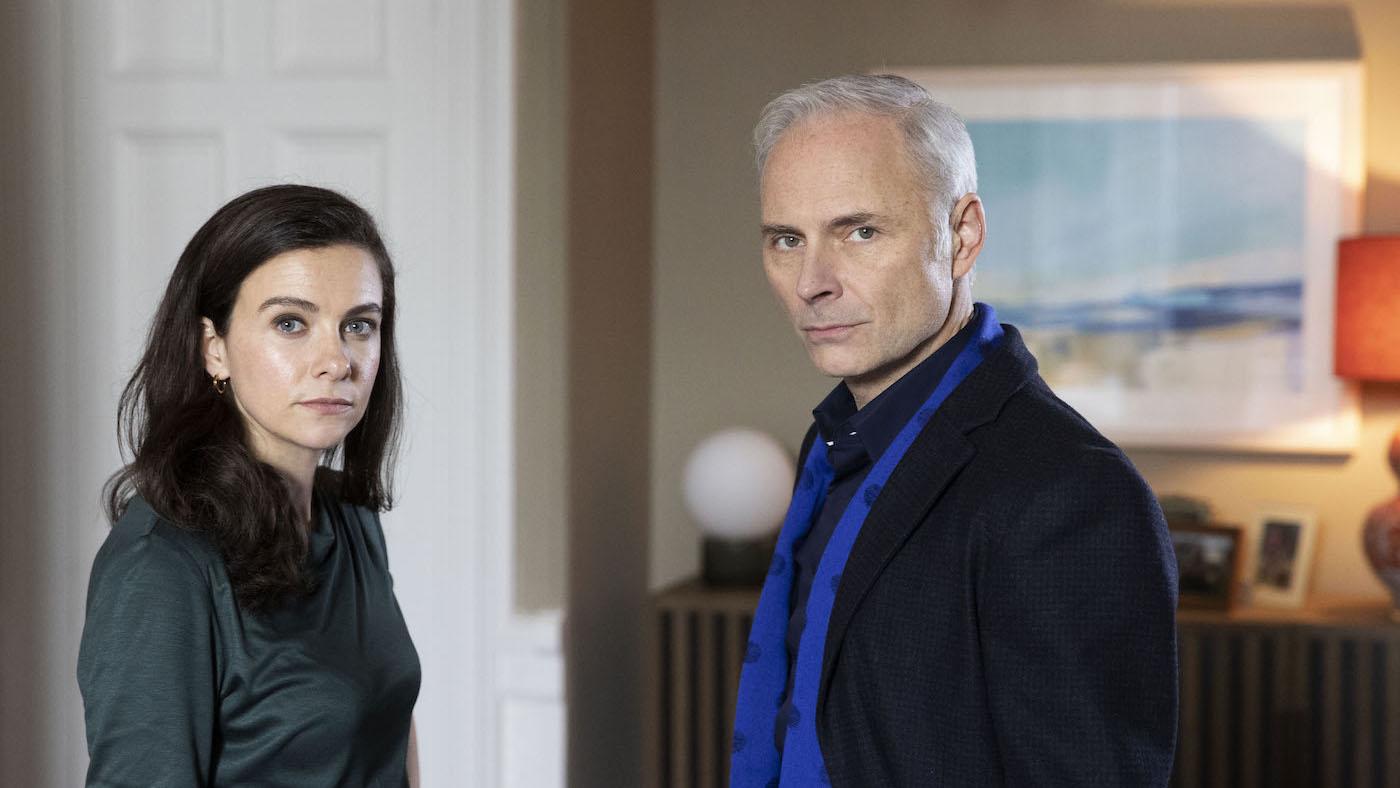 Erin and Max might finally have a way out of a world that keeps pulling them back in. Photo: Expectation/Happy Tramp North

Guilt is available to stream. Recap the previous episode and previous season.

Why has Jake suddenly returned to Edinburgh from Chicago? The “police” called and told him Max had been hit by a bus and was dying in the hospital. But really, he’s there to help Maggie defeat Max’s scheme against her and Roy: tell me what you have done, or I’ll kill Jake and you, she tells Max.

Max lies that he was using Erin to sell her land in the Leith development. Maggie sees through the lie, but appreciates that he’s protecting her daughter. She orders Max to take all the blame, and leaves.

Jake tells Max to come to Chicago to get away from everything, but Max is upset to learn that the Lynches paid Jake when he got Max sent to jail—which he was going to do regardless of the money. Jake bought a bar in Chicago with the cash. The brothers part on bad terms.

Even though the Lynches now know Max’s plan, he goes forward with it, revealing to Erin that her mother is the mastermind of the Lynch enterprises. He offers the head of Phoenix, the company behind the Leith development, the chance to actually own the development instead of being the Lynches’ figurehead. Max has power of attorney over Erin, so he can sell all the land in the Lynch family trust, due to the way he wrote the contract. His offer is accepted—if he can get Sandy to sell the church.

Max continues to play the Lynches, “confessing” his scheme to Erin, as Maggie demanded. After he leaves, the Lynches tell Erin they’re getting back together and moving into a flat in the new development. She finally asks them for the truth about that Christmas Eve twenty years ago, and realizes that her mom was the one with blood on her hands, not her dad.

Maggie explains that Roy was mistreated by a teacher as a boy, so she killed the teacher. Understanding that her mom has always been the mastermind and that she let Roy take the blame, Erin is angry at her mom from stealing her dad from her by letting her believe the lies.

Later, she tells Max that Maggie confessed to the murder—but Erin has deleted the recording Max asked her to make of it. She doesn’t want her dad to go to prison, now that she better understands him and his troubled life. Max is upset: he has sold the Leith land from under the Lynches, so if Roy isn’t in prison, Max is in danger. Erin proposes that Max leave Edinburgh, and take her with him. He gives her a location at which to meet him the next day.

How did Max get Sandy to sell the church? He didn’t; Sandy decided to do it on his own. Max was visiting Sandy when Roy came to visit; Sandy told Max to stay in his office and listen to the conversation without Roy knowing. The church is yours, Sandy tells Roy—but he also reveals a terrible secret. Erin is his daughter, the product of a “betrayal” by Maggie. “Now we’ve both lost everything,” he tells Roy, who leaves, stunned.

Roy goes to Maggie and tells her that moving into a flat together won’t work.

As Max leaves Sandy’s church, he hesitantly asks if Sandy could help the troubled kids of Leith if Max gave him some money from the sale of the land. Sandy says yes, and Max agrees to it before leaving quickly, embarrassed by his desire to do some good.

But can Max survive the various people closing in on him? Kenny has finally decided he wants Max taken down, blaming him for the end of his relationship with Yvonne. She tells him they can be together, but first they have to take down corruption: in Stevie, Roy, and Max. Stevie holds power over her that she’s eager to end: he is the only one that knows she missed a court date as a witness because she was drunk, thus allowing a man to go free.

Jake also urges Kenny to view Max badly. He visits Leith Legal to pick up a “memento” left him by Max: a Clash album. He urges Kenny to avoid the office the next day.

So Kenny shares evidence of Max’s money laundering on behalf of Roy with Yvonne. But to his disappointment, Max might not be arrested—Jackie, the undercover cop leading an investigation into Roy, is trying to pin something bigger on Roy.

She’s now working with Stevie, who went to her after Roy asked him to do the impossible: look through every record of Max to determine if he’s working with the police, without being found out. With Jackie’s blessing, Stevie gives Roy the original file on Max stating that he’s cooperating with the police—and includes a recording of Max speaking to Jackie.

The recording contains Max’s last-ditch attempt to give Jackie something with which to arrest Roy, since he doesn’t have Maggie’s confession. He tells Jackie that someone was probably murdered in the basement of Erin’s house by Roy’s men—although Erin must be innocent.

When Erin goes to Roy to tell him that Max has sold the Leith land and they’re leaving Edinburgh together, he plays her this recording. She tells him she wishes she had known him better, and he tells her that he has always been proud to call her his daughter. She smiles, and leaves with a simple “Bye, dad.”

The murder referenced by Max will take down Roy, anyway. Teddy appears at his apartment, ready to exact revenge for the death of his brother. Roy understands and is ready to accept it—as long as Teddy knows that Erin had nothing to do with it and leaves her alone.

Jackie is determined to make Maggie pay as well—the Lynches are responsible for something terrible that happened to her family, and she has been obsessed with them for twenty years. So obsessed that she has gone rogue, as Yvonne realizes when she learns that Stevie is working with Jackie. Afraid that none of the other various crimes will stick to the Lynches, Jackie is preparing to catch Roy as he takes down Max.

For the Lynches have a plan for Max. They have sent Jake back to Chicago, but not before cutting his hand with a knife that they carefully preserve, with his blood. Their agent then waits for Max to show up at Leith Legal with the knife. He will frame a fight between the two brothers, leading to Max’s death or a lifetime in prison.

But Stevie doesn’t want more carnage, and offers Jackie another crime. Roy asked him for license registration recently, and Stevie decided to check on it later to see what he had wrought. He found the salesman who offended Maggie while peddling flats in the Leith development, dead. If Maggie told Roy to do it, Roy would have killed him himself.

Jackie acquires security footage from the retirement community where Maggie lives of a conversation between her and Roy ordering the salesman’s death. Maggie is going to prison—although she’ll do her best to plead dementia to avoid it.

Max does manage to avoid one consequence: he doesn’t show up at Leith Legal, where the man is waiting for him with a knife.

What does Erin decide to do? She goes to the place she’s supposed to meet Max and calls him when he doesn’t show up. He tells her she doesn’t need him, and that he can free her from her life of associations with bad characters if she wants. All she has to do is go into the church she’s waiting outside of and ask. Out of love and a sense of hope, he’s giving her what he never had: a loving father figure; redemption. Erin enters the church, sees Sandy, and they both smile.

Max has his own familial meeting. He’s in Chicago, where he enters a bar called The Edinburgh Castle. Inside, The Clash is playing, and Jake is there.