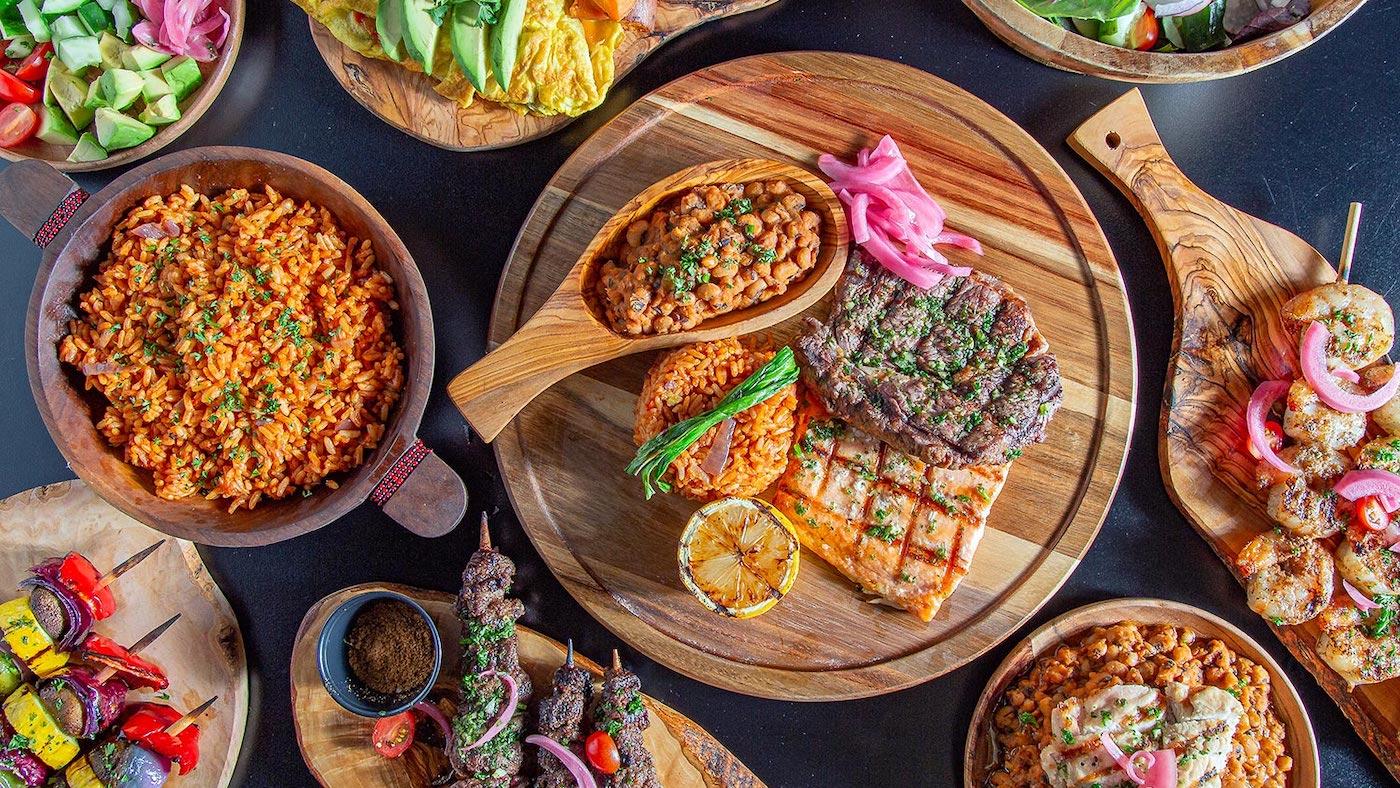 Get more food news and recipes by signing up for our Deep Dish newsletter.

Dozzy Ibekwe wants West African restaurants to be as commonplace in America as Mexican, Italian, or Chinese eateries. He knows there are obstacles to overcome, that “the average American cannot name an African restaurant,” he says. But he dreams of Chicagoans celebrating places like Vee-Vee’s African Restaurant, which opened in Edgewater in 1991, in the same way that they do somewhere like Carnitas Uruapan or Gibsons.

That’s why he started Dozzy’s Grill, a West African pop-up currently operating out of the Near North Side bar The Marvel, where it’s available every Tuesday evening and will soon offer lunch as well. Dozzy’s also does catering, and is the preferred caterer at Avondale’s Guild Row. “The average customer has not had our food,” he says. “They have not had West African food. They just need access to it, and they’re eager to learn, they are curious, they ask questions.”

Ibekwe wants customers to learn about West African food, but he also believes that he must make it more accessible to Americans in order to popularize it. While he respects longstanding restaurants like Vee-Vee’s, he says, “It dawned on me that those who are currently operating or who have led the conversation, they serve the community. They’ve been there for the community. But there are untold millions who have no idea about this cuisine.”

So he serves dishes like a steak “jorrito,” a burrito filled with jollof rice and black-eyed peas, alongside pepper soup, whole red snapper, and suya, a common Nigerian street food consisting of spice-rubbed beef grilled on skewers. While he himself is Nigerian, he says, “I take the approach of using the common, ubiquitous dishes that are enjoyed throughout West Africa, because we represent the region.” There aren’t many places “where we can enjoy West African food that’s presented in a modern way that’s approachable, relatable, and affordable.”

He’s not the only restaurateur trying to make West African food familiar to American customers: a recent New York Times story noted the rise of “fast-casual” West African restaurants following the format of chains such as Chipotle. It’s a trend that tracks the growing numbers of West Africans in America, from around 40,000 in 1980 to 890,000 in 2019, according to the Pew Research Center. “We have grandkids now,” says Ibekwe. “We are in pop culture, we have kids on basketball teams, in fashion and architecture and professional places.”

“This is the moment” for West African food, he avers.

Ibekwe was born in Nigeria and learned to cook at his grandmother’s side. “I went to the markets with her,” he recalls. “We grew vegetables in the front of our yard. We made palm oil from scratch in the kitchen. We made fufu,” a doughy, soft starch staple made from pounded cassava.

His parents moved the family to Chicago when he was fourteen, and he soon got a job as a dishwasher at a chain steakhouse in the suburbs. He continued to work in hospitality while studying computer engineering at the University of Illinois Chicago and eventually switched to Roosevelt University to study hospitality management. Over the years, he worked for several restaurants and hotels—thinking about how to bring the food of his childhood to Chicagoans for much of that time.

The pandemic gave him an excuse—he was laid off twice. He launched Dozzy’s Grill in late 2020, operating out of a ghost kitchen and working with José Andrés’ World Central Kitchen to serve meals to those in need of support. Dozzy’s then held a residency at the Rebuild Foundation’s Retreat at Currency Exchange in Washington Park at the beginning of 2022.

Ibekwe acknowledges that trying a new, unfamiliar cuisine can be a little intimidating. “I began this journey fourteen years ago because I believe that it’s possible to have a place that I can take my friends to enjoy cuisine and flavors I grew up with, and if they like it they can go back and confidently have a similar experience without requiring me to be there for them to have a good dining experience,” he says.

Ron Taylor is one of those friends who once had scant knowledge of West African food. The first time Taylor, a Chicago native and a trained chef, tried Nigerian food was when Ibekwe invited him to a gathering. “It was like out of a movie, with all these Nigerian cats hanging out and cooking authentic food in an apartment,” Taylor recalls. Ibekwe sparked an interest in African cuisines for Taylor, who is African American. Inspired by Ibekwe’s passion and “vision,” he eventually started working with Dozzy’s Grill.

Now Taylor helps Ibekwe refine and serve his recipes, acting as a consulting culinary director of Dozzy’s Grill. “Dozzy is real great about sharing experiences with others, sharing who he is with the world,” says Taylor, who met Ibekwe while they were both working at the Ritz Carlton.

Like Ibekwe, Taylor first learned to cook from his grandmother, and he sees similarities between her Southern dishes, such as braised oxtail over rice, and Ibekwe’s Nigerian food, culinary connections that survived slavery and generations. “We’re bringing our stories together,” he says, “the West African and the African American, and showing how they intertwine and connect in this great food experience.”

Taylor thinks he’s close to perfecting jollof rice, that tomatoey West African stalwart, which has him recalling his grandmother’s rice. “I didn’t realize it at the time, but she cooked rice beautifully,” he says. As an African American chef focusing on a West African dish, he feels that he is bridging the experiences of his own family and immigrants like Ibekwe. If jollof rice is cooked with finesse, he says, “you can feel the story of West Africa being told when you taste it.”

And that is what Ibekwe wants: to familiarize Americans with West Africa through its cuisine.