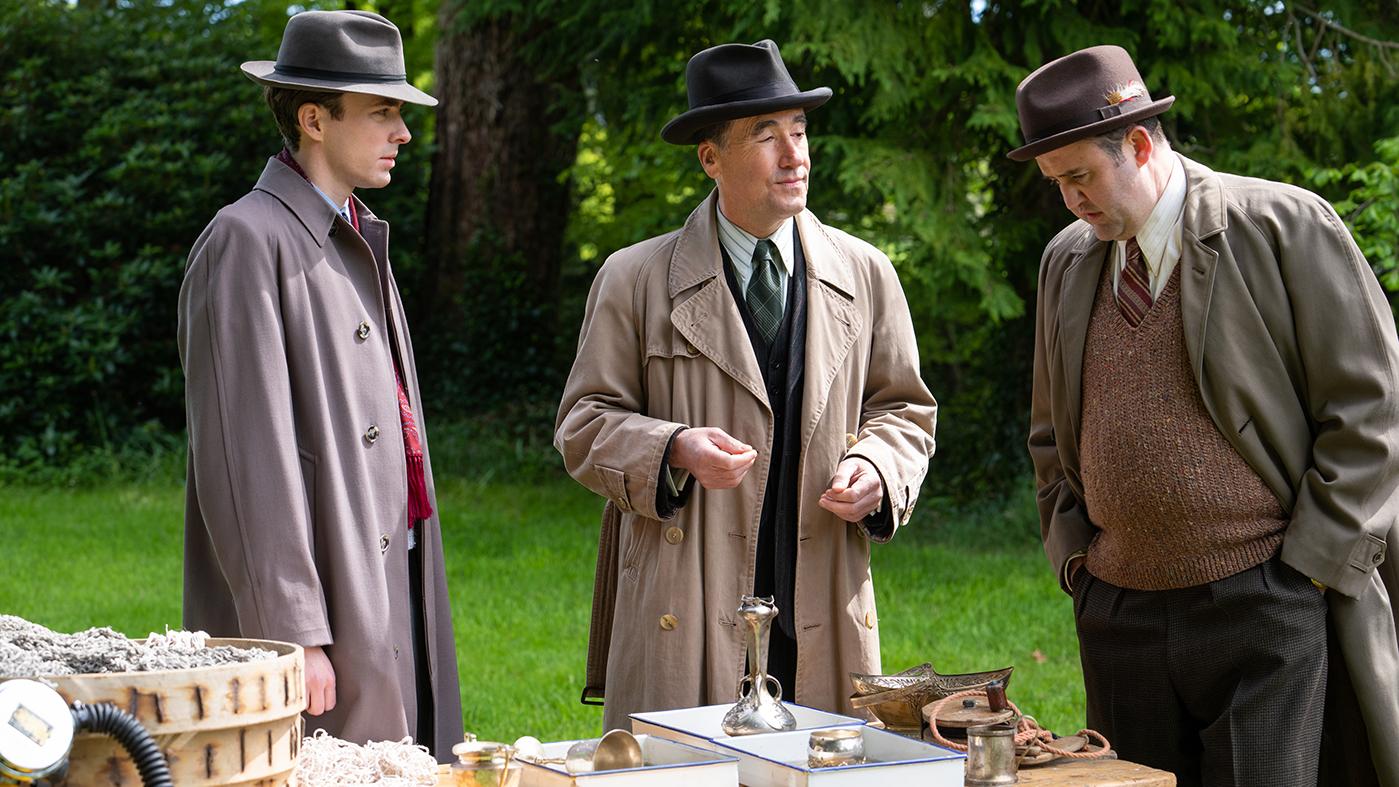 Pünd has a hunch that something will be found in Pye Hall's lake that will reveal clues to Sir Magnus's killer. Photo: Eleventh Hour Films

Susan and Atticus Pünd are narrowing down their suspects, discovering and sometimes dismissing motivations for murder as quickly as they come—but some things are not so easy to ignore. For example, a photo of Andreas grabbing Alan on the top of the tower at Alan’s home from which the writer fell and died.

The image was sent to Susan anonymously. Her relationship with Andreas has already become tense due to her skepticism about moving to Crete with him and her discovery that he once dated Alan’s ex-wife. She needs to return to London and speak to him in person.

But she diverges from that goal when James calls her to Alan’s erstwhile home with new information. James has remembered that he saw a copy of Magpie Murders in Alan’s home the day before he died, but that it disappeared. Alan’s sister Claire visited in the interim; she could have taken it.

Susan is finding it difficult to concentrate, fretting as she is over Andreas. She asks James if he recognizes or knew Andreas, and James recalls that Alan spoke to Andreas on the phone. Alan was annoyed by the call: Andreas was going to visit to ask him for money, but Alan didn’t want to give him any.

This reveals a lie: Andreas told Susan that he was rehearsing the school play Saturday night, when he must have gone to visit Alan instead. Susan’s inner detective—Pünd—angers her as she drives to Claire’s house by suggesting that Andreas could have killed Alan for money.

Susan is thus brusque with Claire when she arrives to ask her about Magpie Murders. Claire admits that she took the manuscript from Alan’s house and burned it, incensed by his cruel sketch of her as Clarissa Pye. She didn’t read the ending.

Such behavior was nothing new for Alan. Claire had been his secretary, working for a low wage despite his wealth. She helped him with his books, introducing him to Inspector Locke for advice on police matters; Alan repaid that debt by putting Locke into the books as the bumbling Chubb. Alan was never grateful or kind, even to his own sister. Claire is glad he’s dead.

Clarissa Pye is also glad that her brother, Sir Magnus, is dead. Pünd has discovered a notebook full of gossip about the village in Mary Blakiston’s home. (He also found a dog collar in Mary’s sewing room, which looks out on the lake where her son Sam drowned.)  One entry notes that Clarissa is the one who delivered an anonymous letter threatening Sir Magnus for his plan to develop the meadow Dingle Dell—Mary saw her drop it off. Clarissa initially denies it, but Pünd recognizes the typewriter in her home as consistent with the letter’s typeface, and she concedes. But it doesn’t matter now; Dingle Dell was saved by Sir Magnus’s death.

Saxby-on-Avon’s vicar is unsurprised to learn that Mary kept careful note of rumors. But he praises her for all her work in the church, and notes that her son Robert was especially upset at her funeral. He didn’t even speak to his father. Pünd asks the vicar for a copy of his sermon from the funeral.

Mary also discovered the secret of Jack Whiteley, an antique dealer in town. His name is in fact Whitelaw, and he is a former member of a professional burglary gang in London. Pünd also deduced this, recognizing Whitelaw’s face from the newspaper. Whitelaw’s wife Gemma says that they moved to Saxby-on-Avon to reform and start over. They didn’t know that the silver brooch they were trying to sell was stolen, or that it came from Pye Hall. They admit that Brent, Pye Hall’s gardener, sold it to them.

Brent is an odd, solitary fellow—Alan based him on a hopeful writer who asked too many questions at a writer’s workshop. Brent admits to finding the brooch and a figurine that he kept for himself near the lake at Pye Hall the day after it was broken into. The thief must have dropped them while leaving.

Pünd asks Chubb to have divers trawl the lake. They discover the rest of Sir Magnus’s trove of silver, which disappeared during the break-in. Whoever broke in did so not to steal the treasure, which they discarded immediately, but for another reason.

There is more intrigue at Pye Hall. Mary’s notebook claims that Lady Pye was having an affair with a man in London; when confronted, Lady Pye acknowledges it. She was with her beau in London when Sir Magnus was killed. But she insists that Sir Magnus didn’t know, and that Mary wouldn’t have told him. She and Mary spoke nearly every day; Lady Pye even called her the morning that Mary died.

Susan fears she knows who killed Alan Conway. When Andreas won’t answer his phone or texts, she storms into the middle of a class he’s teaching—that’s why he hasn’t been responding. She waits outside, kicking her heels like a guilty student, for him to finish up.

She then begins to interrogate him. How did he get the money for the hotel? And why is there a photo of him with Alan on top of Alan’s tower?

Andreas explains that he desperately wants to move back to Greece; Susan is the only reason he has stayed in London so long. He decided to ask Alan, as a one-time colleague and the richest person he knew, to invest in the hotel. He got Alan’s address from Susan’s laptop, which she had left open. He apologizes for going behind Susan’s back and not telling her any of this.

Alan coldly dismissed Andreas’ offer, but suddenly became generous and friendly when Andreas mentioned Susan. Magpie Murders was going to be Alan’s last Atticus Pünd novel—not that Susan knew—and he wanted to thank her in some way for her work on the series, he told Andreas. So he agreed to invest after all, calling his lawyer Sajid Khan immediately to put together a contract. Susan realizes that Alan simply wanted to have power over her.

Alan then showed Andreas around his home. While taking in the view from his tower, Andreas decided to hug Alan out of gratitude. That is what the photo shows.

But then who took it and sent it to Susan?

It’s a question that will have to wait. Andreas is upset that Susan thought he was capable of murder. He should have never asked her to move with him to Crete.