A Paleontologist Finds a Fossil. Now What?

It’s hard work to free a fossil from the ground. The paleontologists and volunteers who dig for fossils have to contend with bad weather, mud, plaster-covered hands, and large tools. But after all that hard work, there’s a fossil.

Fossils don’t just go from the ground right to a museum display. There’s a lot of delicate work that happens before it’s ready for the public to see. And not all fossils are even put on public display, anyway – but more on that later.

Akiko Shinya is the chief fossil preparator at the Field Museum. She’s been working for the Field since 2001. In addition to preparing fossils in the museum’s lab, she also goes on field expeditions in search of fossils. On one expedition to Patagonia, she discovered a new theropod dinosaur called Gualicho shinyae, which is named in her honor. Shinya likes just about every aspect of finding and preparing fossils.

“I like going to the field and looking for fossils,” Shinya said. “Finding fossils is fun. Revealing fossils under the microscope is also fun. And I like working with people from all over the world. There is really nothing I don’t like about my job.” Emily Graslie joins a team from Casper College as they work to unearth a Diplodocus.

Shinya broke down the whole process – from looking for a bone all the way to preparing it in a lab.

Let’s say someone is working at a field site in Utah. The first thing a seasoned fossil hunter would do would be to apply for a permit that would allow them to dig on a piece of land and then remove any fossils they might find.

The next step, Shinya said, would be to walk around the land looking for visible fossil fragments sticking out of the ground. If the fossil hunter determines that those fossils are worth the time, they expose the surface a little, set a perimeter, and start to trench around the fossil until they have a mushroom-shaped rock.

The type of tools a fossil-hunting group might use depends on the type of rock they’re digging through. Shinya said in the case of digging for a dinosaur in Utah, they’d probably use small shovels, chisels, rock hammers, and brushes. Also inside a fossil hunter’s field kit? Glue, magnifying glasses, plaster, and toilet paper or paper towels.

Once the fossil is exposed enough, it’s time to cover it in what’s called a field jacket, a plaster cast-like covering that allows the fossil to be transported. The fossil hunter uses paper towels, toilet paper, or some other material to prevent the plaster from sticking to the surface of the fossil. Then, typically using strips of burlap dipped in wet plaster, they begin to cover the fossil to make the field jacket. Once it’s dry and the whole fossil is covered, it’s off to the lab. 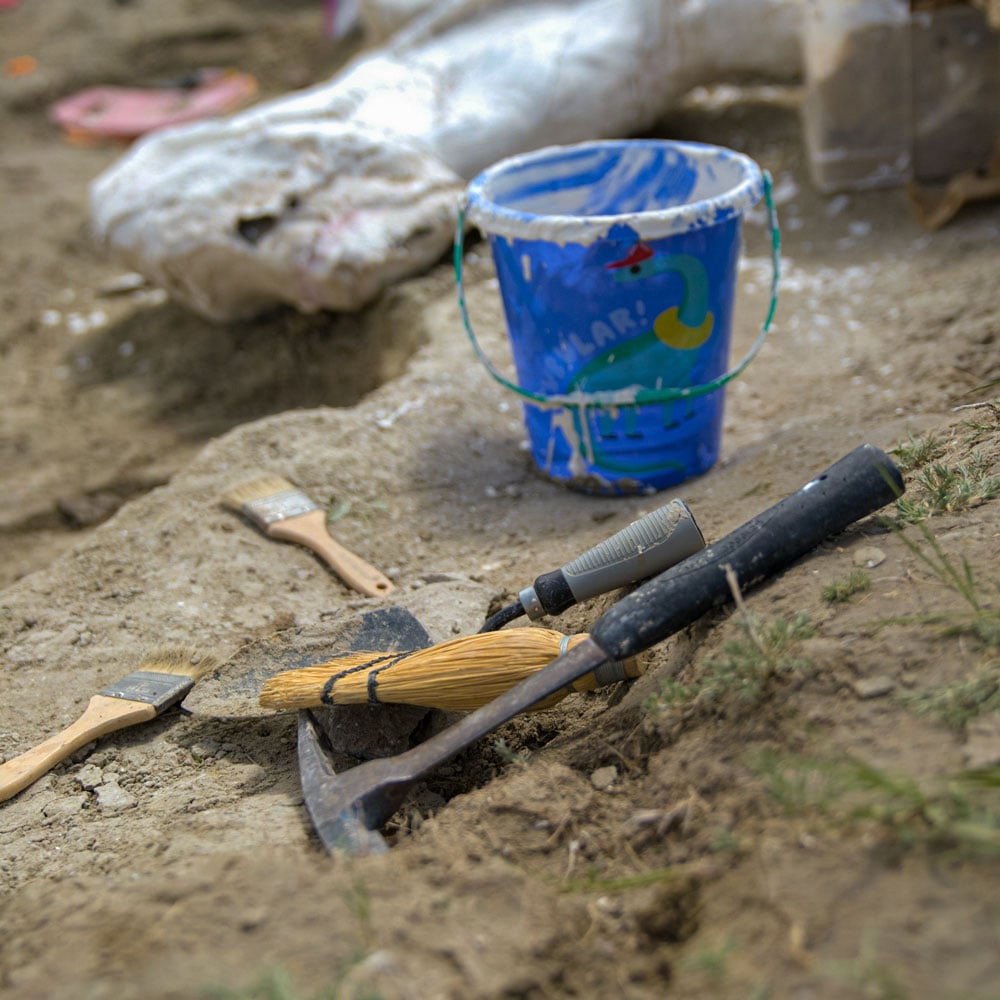 Fossil tools, including brushes and rock hammers, sit next to a bucket of plaster used to prepare the bones of a Diplodocus. Photo: Julie Florio

Back in the lab, the careful work begins to remove the fossil from its field jacket and start to free it from its matrix, or the dirt and rock surrounding the fossil. To do that, fossil preparators first use some type of saw, such as a cast-cutter or angle grinder, to remove the jacket so they can start to remove the matrix.

According to the Field Museum, there are three types of fossil preparation: mechanical, manual, and chemical. Mechanical preparation uses pneumatic tools, such as little jack-hammers or drills, to remove the matrix from a fossil. Manual preparation uses hand tools, such as brushes or even dental equipment, to remove the matrix. Chemical preparation is “a series of immersions of a specimen into a weak acid bath” to expose the fossil bone. After the bath, the preparator rinses the specimen and covers it in a light layer of glue. All types of fossil preparation are usually performed under a microscope to avoid damaging the specimens.

It can take a long time to prepare a fossil. According to Shinya, one recent specimen that she worked on that was the size of a football took 300 hours to prepare. A fossil fish took 94 hours.

In a field that is subjected to the elements, not everything always goes according to plan when digging for or preparing fossils. There are plenty of times when paleontologists and other fossil hunters encounter problems in the field or in the lab.

Once, when Shinya was working with a team in Missouri to excavate the skull of a hadrosaur (a duck-billed herbivore), the team ran into an unusual challenge. Because the environment was so wet and muddy, everything was saturated with water.

“The fossil preservation was extremely unusual where everything was sort of mushy,” Shinya said.

While the hadrosaur skull was drying, it started to crack open.

It was particularly challenging to keep the skull from cracking any further or losing any fragments. Normally, fossil hunters use a special glue to keep fossils together before applying the field jacket, but in the case of the hadrosaur skull, they had to use so much glue that the fossil actually started to stick to the field jacket.

Shinya has encountered plenty of other challenges, such as finding a fossil with hematite – a hard-to-remove reddish mineral – embedded in a fossil, or excavating in Antarctica, where the surrounding rock is harder than the fossil.

Though every fossil in a museum has been prepared by someone like Shinya, not every fossil that is prepared makes it into a museum display. Most of the time, in fact, they’re photographed, catalogued, and stored safely away.

Shinya said that when she tells people about her job as a fossil preparator, people tend to be surprised, because not every specimen that comes through her lab looks like a perfectly preserved dinosaur.

But there’s still plenty that paleontologists can learn from those fossils, and Shinya’s work allows for scientists to make important discoveries.