Examining the History of Fossil Collection from Native American Lands

To whom does a fossil belong? That’s a question paleontologists have long grappled with. Usually, in the United States, a fossil belongs to whoever owns or manages the land from which the fossil was taken.

But when looking at the history of how natural, cultural, and other resources have been taken from Native American lands, it becomes clear that paleontology hasn’t always had a great track record, either. There is a long history of fossils being taken from tribal lands in America – a history that native people, paleontologists, museums, and universities are examining in order to create better collaboration.

“There’s an abundance of fossils on Standing Rock, and we’ve had a lot of problems with people looting here,” said Benjamin M. Eagle, the fossil preparator for the Standing Rock Sioux Tribe.

The History of Fossil Collection on Tribal Lands

The Value of Fossils

Emily Graslie talks to an expert who studies how fossils were removed from Native American lands without permission – and others who are working to change that pattern.

According to Dr. Lawrence Bradley, an adjunct professor in the Department of Geology and Geography at the University of Nebraska Omaha, fossil collectors have been taking specimens from tribal land since Western scientists discovered them in the United States in the mid-1800s.

Bradley, who was inspired to research fossil dispossession because his stepfather was a member of the Oglala Lakota Tribe, said there are many stories of early paleontologists taking advantage of Native American lands. Bradley said that Joseph Leidy, who is considered the father of paleontology, describes fossils in his writings that were likely taken from tribal lands.

Bradley also recounted one story of paleontologists in the nineteenth century who diverted food supply wagons intended to bring supplies to Native Americans on the then-newly formed reservations. Instead, fossils were loaded onto the wagons and the wagons were sent to deliver the specimens to paleontologists.

“Wagons that were meant to haul food to people that needed food instead were diverted,” Bradley said.

Bradley argues in his research that fossils are another natural resource that has been taken from Native American lands. In addition to the land itself, tribes were dispossessed of things such as minerals, coal, timber, and other resources as the United States government pushed native peoples west and shrank their territories, forming the reservation system that is still in place today.

Bradley began researching this topic in 2002 when he got permission from Santee Sioux Reservation leaders to conduct a survey of what fossils they had on their land. Bradley learned about a plesiosaur specimen that had recently been excavated from the reservation without the knowledge of the tribe. He then conducted surveys of museum and university fossil collections. Based on an educated guess from the museums he surveyed, Bradley said anywhere from 50 to 75 percent of the fossil specimens in those museums’ collections were from tribal land.

So should these items be returned? According to Bradley, many tribes don’t have the space or resources to store fossil specimens, so it’s not a simple yes-or-no question.

Fossils are not covered under the Native American Graves Protection and Repatriation Act, a federal law passed in 1990 that requires organizations such as museums to return Native American cultural items, including “human remains, funerary objects, sacred objects, and objects of cultural patrimony,” to descendants or tribes.

Some tribes and museums are taking their own steps to, if not return every specimen, at least protect tribal resources and open up better communication between tribal and non-tribal people. The Standing Rock Sioux Tribe is the first in the nation to create its own paleontology code that sets out rules for fossil collection on its land.

“There’s been fossil looting here for decades,” said Eagle. “We hear about rumors of people going to South Dakota to sell fossils that belong to the tribe, and even some paleontologists coming to the [tribal land] and taking fossils.”

Since he began collecting fossils in 2008 with the Standing Rock Institute of Natural History (SRINH), Eagle said they have collected more than 12,000 fossil specimens. Much of the land contains the Hell Creek Formation, in which famous dinosaurs such as Edmontosaurus, T. rex, and Triceratops, have been unearthed.

The goal, then, of the paleontology code is to protect those resources. The code defines a fossil and says that the Standing Rock Sioux Tribe is the owner of all fossils found on its land, “no matter what,” said Eagle.

The code requires anyone who wants to look for fossils on the land to get a permit and to work with the Tribal Historic Preservation Office to ensure that no cultural or sacred sites are disturbed. The code also says that anyone who violates these rules can be subject to criminal prosecution. 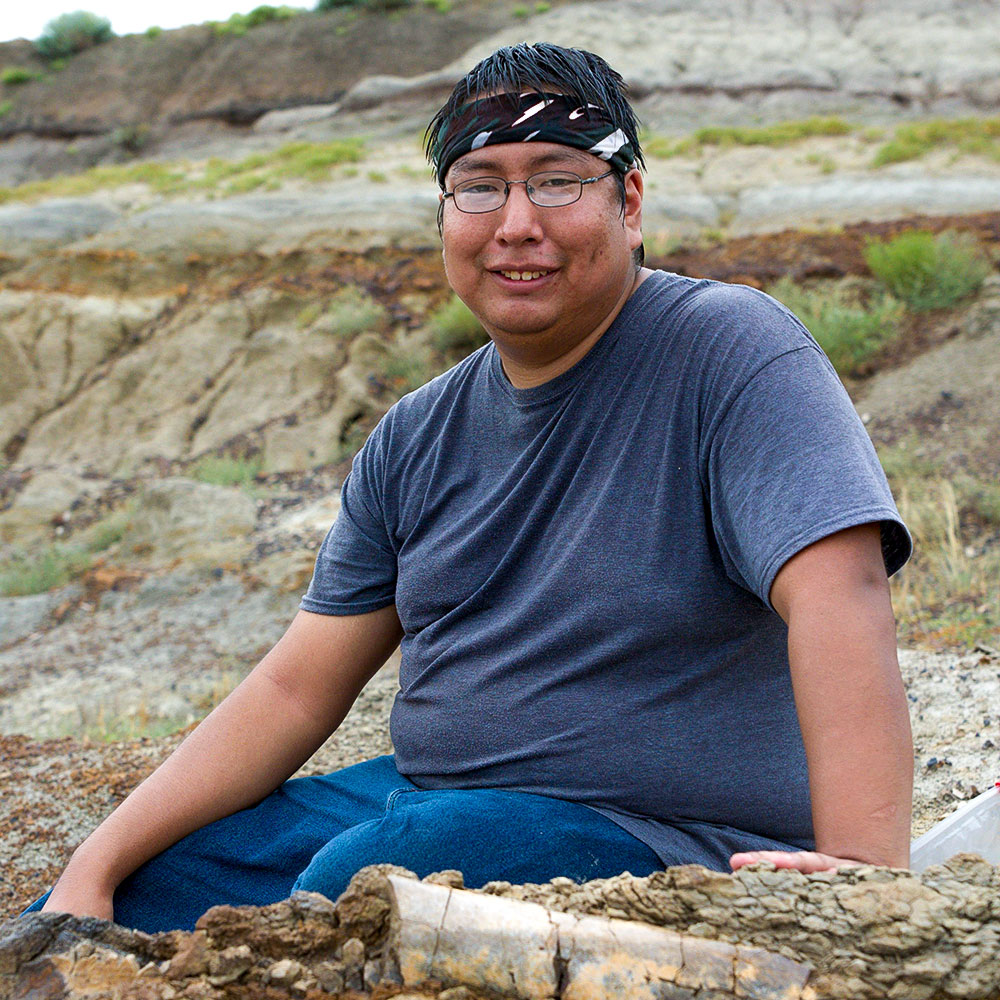 Other groups are working to enact similar protections. Bradley pointed to a resolution in the Nebraska state legislature that is working to promote collaboration between governmental agencies and tribal governments in the protection of paleontological resources.

Similarly, the South Dakota School of Mines and Technology (SDSMT) in Rapid City is trying to identify which fossil specimens in its collection were taken from tribal land.

Sally Shelton, who used to manage the collection at SDSMT and is now at the Museum of Texas Tech University, said that early on, the tribal members she met with didn’t trust non-tribal members when it came to the issue of fossil collection.

Previously, said Shelton, “There really wasn't any perception that anybody else had rights to be looked out for when you were collecting something like that other than just trespassing…It's historic bias that nobody had questioned.”

Shelton worked with tribal members from the Pine Ridge Reservation to improve that relationship. When SDSMT built a new fossil repository building, they coordinated a tribal blessing and invited Oglala Lakota tribal members to see which fossils were theirs.

Graduate students at SDSMT also worked on cataloguing the fossils that came from tribal land. Shelton said no fossils have been returned to the tribes yet because – as Bradley also pointed out – many reservations don’t have a place to store fossils.

“People I've worked with told me that they just wanted to know what was there,” Shelton said. “They wanted to feel like they were full partners in ways that we're full partners with other agencies,” such as the park or forest services. Those agencies usually partner with museums and universities to store fossils found on those lands.

So what does good collaboration between tribes and museums or universities look like?

“Good communication, full permission, and total transparency,” said Shelton. “Whether it be a permit or written permission, the first part of collaboration is mutual respect.” 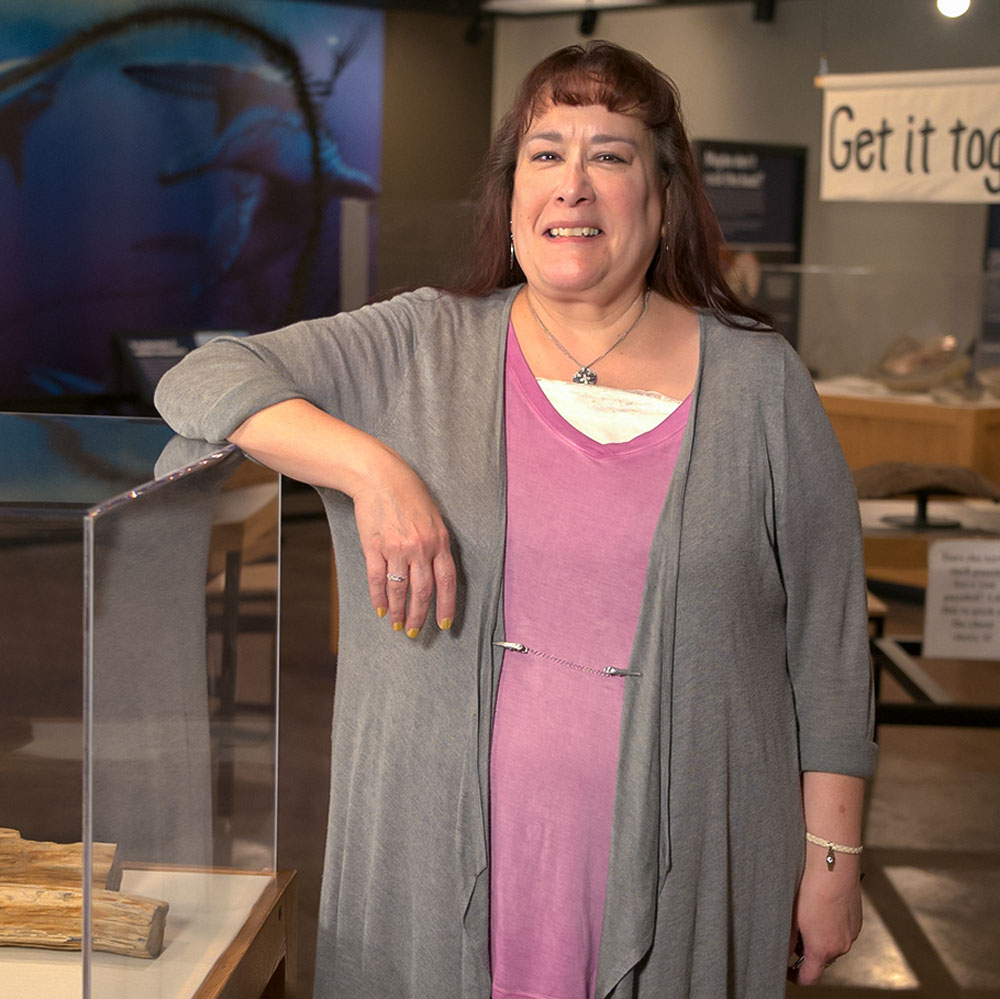 Sonya White Mountain was director of the Standing Rock Institute of Natural History, which has since closed. Photo: Julie Florio

Bradley added that museums should also acknowledge which fossils come from tribal land, such as on the display plaques next to the specimens.

But there are still ongoing challenges, including obstacles for those working at the Standing Rock Institute of Natural History. The institute closed in September 2019 due to a lack of funding.

“We have over 12,000 fossils after a few years, and there’s a lot of really important discoveries that we have, and we actually don't have the manpower to finish those fossils and do the research,” said Eagle. “They’re just sitting in storage now.” The roof of the SRINH storage facility, Eagle added, is in danger of caving in.

And getting funding is a challenge, particularly because Standing Rock faces other social and economic issues.

“I think the reasoning is that paleontology is not a vital program. It's not something that provides day-to-day assistance, [such as] child protective services or social services,” White Mountain told Emily Graslie. She sees the educational value in paleontology for children who live on the reservation. But keeping those resources available to the public requires collaboration with non-tribal groups.

“We have so much here, so much that could make an impact if people would...not just come and take advantage and leave,” said White Mountain, “but come and help and invest themselves into us, into our culture, into our resources.”