How a Housing Development Led to a Mammoth Discovery

Just a one-hour drive south of Rapid City, South Dakota, there is what basically amounts to a mammoth graveyard. The Mammoth Site of Hot Springs is an active dig site and museum that’s open to the public. It is home to the remains of 61 mammoths. But how did anyone find such a site?

“It was luck,” said Bethany Cook, public relations coordinator for the Mammoth Site.

Cook said that in 1974, a backhoe operator named George Hansen was clearing a pathway to build an alley in a proposed housing development in Hot Springs, South Dakota, when he felt the machine hit something. When Hansen hopped out to see what it was, he noticed a large tusk peering out from the soil.

After the universities Hansen contacted didn’t express interest, he asked his son Dan, who had taken classes with notable paleontologist Larry Agenbroad at Chadron State College in Nebraska, to look at the bones. Dan alerted Agenbroad, and when Agenbroad eventually made it to the site, he discovered that there were at least four mammoths, and he suspected more. Agenbroad called on Dr. Jim Mead, now the Mammoth Site’s director of research, who worked with a crew to excavate the bones. 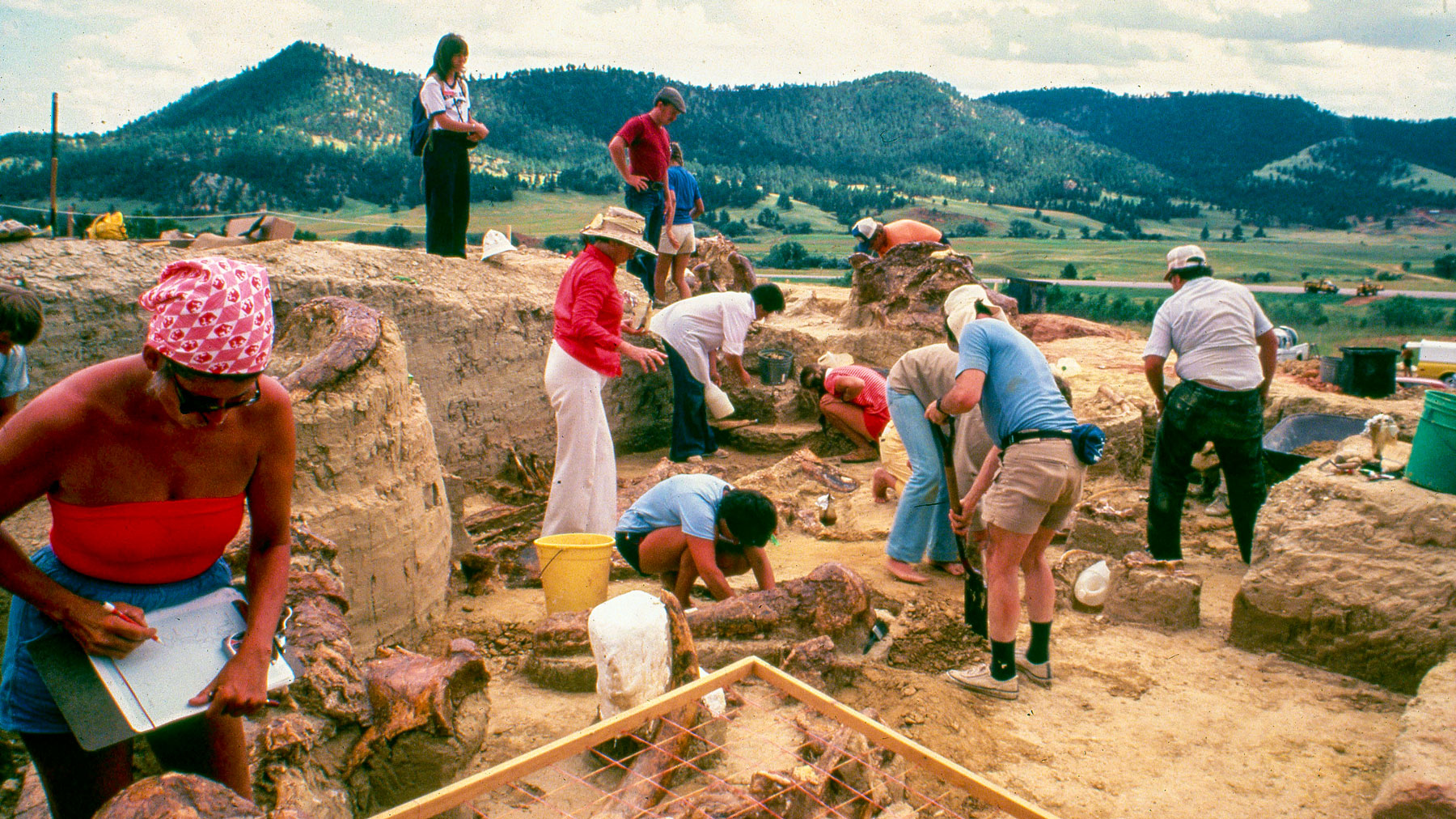 A backhoe operator discovered a tusk when working on a housing development site. Photo: Courtesy of the Mammoth Site of Hot Springs

The landowner, Phil Anderson, halted construction on his site, and the following year, as more bones – even a complete mammoth skull – were unearthed, he called off the housing development.

“Phil Anderson knew the scientific importance of what the site was,” said Cook. “Because some people would have probably just bulldozed over it, would have never thought about it.” Emily Graslie travels to the Mammoth Site at Hot Springs, South Dakota, to learn more about the Ice Age sinkhole that became a mammoth graveyard.

The Mammoth Site, which has since become a nonprofit organization, is still an active dig site, as well as a museum and education center.

Since it was discovered, scientists have learned a lot about the Mammoth Site and the creatures that once died there in the Pleistocene epoch. The site was a sinkhole that contains the remains of 58 Columbian mammoths and 3 woolly mammoths. But other Pleistocene animal remains have also been found, including the giant short-faced bear, prairie dogs, llamas, camels, and more. Cook said that many mammoths and other animals would have been drawn to the edge of the sinkhole.

“What would happen is, they go to eat the green grass, they would slide in and fall in, and then they couldn't get back out because they don't have any claws and because of our slippery sediment. So there was no way for them to get back out,” Cook said.

Paleontologists have also discovered more about the specific time period. It was originally thought that the site was roughly 26,000 years old, Cook said. But using a technology called optically stimulated luminescence, the experts at the site determined a more complex story. The sediment at the top of the sinkhole is roughly 140,000 years old, while the bottom dates back 190,000 years. 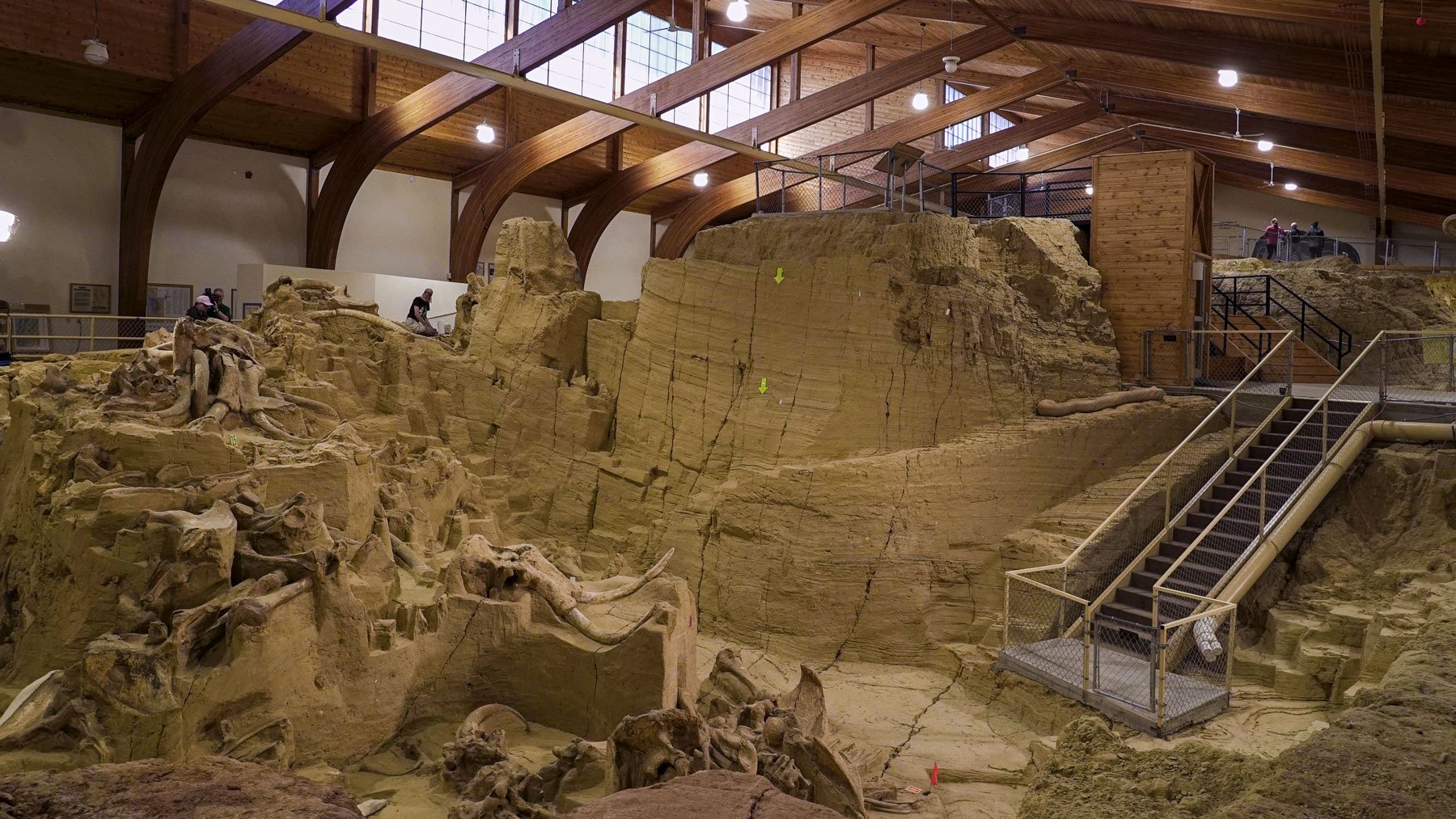 Visitors can watch scientists work on the exposed mammoth bones in the pit of the museum. Photo: Julie Florio

Let’s take a moment to talk about the star of the show: the mammoth. These great, elephant-like creatures lived during the Pleistocene epoch. The larger Columbian mammoth grew to nearly 10 tons, were 14 feet tall, likely traveled in herds like the modern-day elephant, and went extinct between 13,000 and 10,000 years ago, according to the National Park Service. Their smaller, hairier cousins, the woolly mammoth, weighed 6 tons, were 11 feet tall, and thrived in the colder climate during the Ice Age. The last surviving woolly mammoths died approximately 4,000 years ago. Both types coexisted with humans.

Though these creatures were undeniably sturdy, the bones of these giant creatures, which are still being excavated in Hot Springs, are even more fragile than the average fossil. While technically old enough to be considered fossils, the conditions of the sinkhole were such that the bones didn’t petrify, according to the Mammoth Site.

The Mammoth Site is significant not only for the large number of mammoth remains, but also for what it teaches us about the environment. Sites like this, Cook said, “help us determine what the actual plant life and animal community looked like” during the Ice Age.

“Are we actually going to go through those time periods again?” Cook said. “How was the environment changing through time? What was the climate like?”

Though these questions focus on the past, Cook said, the answers could be important keys to understanding our planet’s future.