How Did Sauropods Get So Gigantic? | Stops | Prehistoric Road Trip

How Did Sauropods Get So Gigantic?

The largest land mammal on earth today is the African bush elephant, with the largest weighing in at a whopping six tons. But standing next to a sauropod, an African elephant would look almost petite.

Sauropod expert Cary Woodruff said that the long-necked, plant-eating dinosaurs are famous for being the largest land animals ever to walk the earth. Woodruff is the director of paleontology at the Great Plains Dinosaur Museum in Malta, Montana, and a PhD student at the University of Toronto. (He is also active on Dino Twitter.) Time of the Titans

Cary Woodruff chats with Emily Graslie about the impressive size of sauropods.

“A lot of times when people hear the word dinosaur, that’s the mental image that they go to,” Woodruff said. He pointed to Dino from The Flintstones and Littlefoot from The Land Before Time as easily recognizable examples of sauropods.

Early sauropods, who roamed the planet as early as the Late Triassic period some 240 million years ago, were much smaller, even cat-sized, meat-eating creatures that may have walked on two legs.

“They have an especially interesting evolutionary history, just trying to understand how these little two-legged, meat-eating dinosaurs become the largest plant-eaters that have ever lived,” Woodruff said.

You’re probably familiar with what a sauropod looks like, even if you’re not familiar with the term. Atop their long necks were small heads. They had giant legs, too, and long tails brought up the rear. Though different types of sauropods varied in weight and length, a recently discovered sauropod called Patagotitan was estimated to be as much as 120 feet long and upwards of 70 tons.

Máximo, the cast of a species of titanosaur known as Patagotitan mayorum currently on display at the Field Museum in Chicago, is 122 feet long, 28 feet tall at the head, and would have weighed 70 tons when it was alive. That’s 10 times the weight of an African bush elephant. Some species of sauropods include Brontosaurus, Brachiosaurus, Apatosaurus, Diplodocus, and Camarasaurus, to name a few. 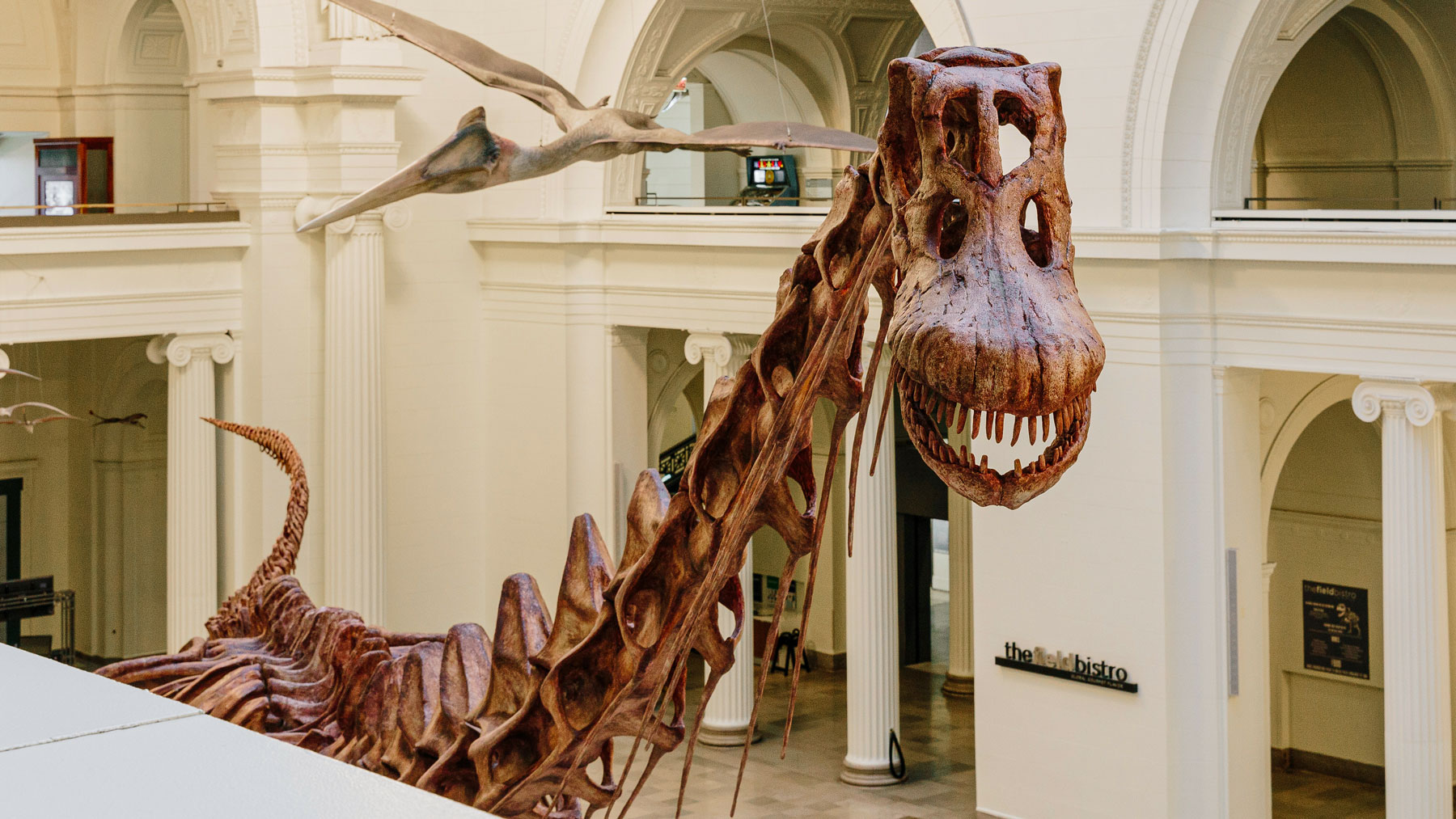 Máximo, the cast of a species of titanosaur known as Patagotitan mayorum, has no trouble peeking in the second floor of the Field Museum in Chicago. Photo: © Field Museum, Photo by Martin Baumgaertner

Throughout their evolutionary history, they became the dominant herbivores through the Cretaceous period, dying with the other dinosaurs in the mass extinction event 66 million years ago.

They were able to become such dominant dinosaurs (at least among the herbivores) because “they were engineered really well,” said Woodruff, especially in how they chewed and digested food.

As paleontologist Steve Brusatte writes in his book, The Rise and Fall of the Dinosaurs, sauropods did something called “niche partitioning – when coexisting species avoid competing with each other by behaving or feeding in slightly different ways.” While one species might have a straighter neck and pointy teeth, another might have a more giraffe-like neck and thicker teeth, meaning they likely ate very different types of plants.

In addition, they filled the landmass of Pangea, so when the supercontinent started to break apart, they were already in place all across the land. Their geographic range was also an important factor in their dominance.

Today, sauropod fossils are found all over the world. In the United States, many sauropod remains (and other dinosaurs, too) have been found in the Morrison Formation – a well-studied stretch of sedimentary rock spanning Montana, Wyoming, Colorado, the Dakotas, Nebraska, and parts of other western states.

What makes sauropods so interesting, said Woodruff, is not just that they’re super big, but why they were so big.

“A lot of people like sauropods just because they’re the biggest animals of all time,” he said.  “And that is really neat, but…how do you become the biggest animal on earth, and why have we not had any – and I’m talking not even in the close ballpark – terrestrial vertebrates similar in size to sauropods since they went extinct?”

Old-school theories might have said that they were able to get so big simply because they outgrew their predators. But it’s not that simple. Part of it, said Woodruff, was that they ate lots of food and needed a big gut to keep up with it all.

“You can’t be the size of a beer keg and have little mouse legs,” he said. Woodruff describes sauropods as being “big fermentation tanks.” Because fermentation – a metabolic process in which microbes break down molecules such as carbohydrates ­– produces heat, sauropods would need to dissipate that heat.

“One way you can shed the excess body heat and not overheat yourself is to be bigger, because that gives you a bigger surface area to dissipate heat,” he said. On top of that, it could take a sauropod four or five days to totally digest food. And they weren’t eating every four days – they were eating every day. 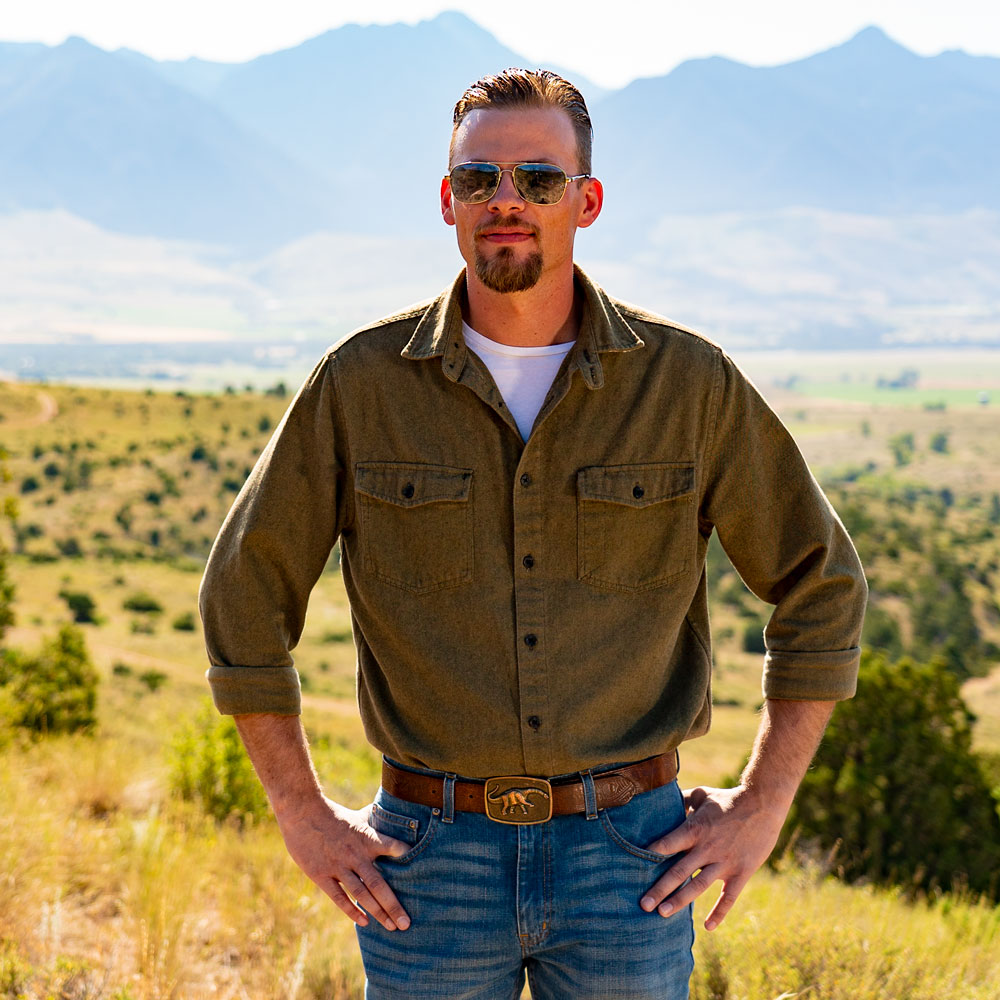 Their growth rate also makes them interesting, Woodruff said. Back in the old days, paleontologists used to think that dinosaurs were essentially just big lizards. And a big lizard must take a really long time to grow up and therefore live a long time, right? Not so fast.

You might also think that a dinosaur that big must have come from a really big egg. Again – nope. Woodruff said that while there haven’t been a ton of sauropod eggs discovered, the ones that have been found are usually the size of a cantaloupe.

“That’s going from fitting inside a cantaloupe to being the biggest animal that ever walked on earth in a 20-30-year span,” he said. So how did paleontologists figure all this out?

“We just cut a bone open. It’s that simple,” Woodruff said. “You can see what’s equivalent to the growth rings in a tree. So we can count those growth rings and figure out how old an individual was when it died.”

In addition to their impressive growth rate, Woodruff said sauropods’ bones and teeth actually changed shape as they grew, meaning they might have had different feeding patterns over the course of their lives.

There have been some exciting discoveries about the giant herbivores. Some fossilized skin impressions revealed that sauropods were definitely scaly. But unlike the question of whether or not the T. rex had feathers, sauropods definitely didn’t have feathers. According to Woodruff, they may have had more markings, patterns, and color variations on their skin than the typically portrayed dinosaur, who has the kind of dull coloring of something like an elephant. In addition, sauropods, like birds, may have had a fourth cone in their eye that allowed them to see ultraviolet light. But, Woodruff said, there is still so much to learn about sauropods.

“For being such a classic and iconic ‘cereal box dinosaur’ that we think we know everything about, we know so little about them, and I think that’s sort of the great mystery.”