Leaf It to the Experts: Studying Plants to Understand an Ancient Global Warming Event

As scientists work on predicting the effects climate change will have on the future of our planet, some are looking way back into the past for answers. There are clues in the fossilized plants from a period of rapid global warming millions of years ago. Climate Change in the Fossil Record

Emily Graslie meets up with a group of scientists who are studying an ancient global warming event in the Hanna Basin.

The Paleocene-Eocene Thermal Maximum (PETM) is the technical name for that period of global warming approximately 56 million years ago that scientists estimate lasted nearly 120,000 years. The release of carbon into the atmosphere lasted an estimated 10,000 years. During the warming, the planet saw a carbon-induced increase in global temperatures by about 5 degrees Celsius.

“We're not 100 percent sure what the source of that carbon was – if it was carbon dioxide that was being released or methane,” said Ellen Currano, an associate professor who studies fossil plants at the University of Wyoming. (Currano also co-founded The Bearded Lady Project, which highlights the work of women paleontologists.)

Some have hypothesized that it was a release of methane as ice melted in the ocean while the planet naturally warmed. Others attribute it to increased carbon dioxide from volcanic activity or even (less likely, according to Currano) the impact of a comet. The precise “why” is still a mystery. But paleontologists and geologists do know by examining the chemistry of fossils, shells, and rocks from that period that there was definitely an increase in carbon released into the atmosphere and oceans.

Currano said that in general, both the Paleocene and Eocene were really warm, tropical time periods on Earth. There was no ice at the North or South poles. It was very humid. In Wyoming, for example, there were palm trees.

“Wyoming would be a lot more like Florida is today,” Currano said.

Most of the continents were covered in lush forests and swamps. There were metasequoias (a.k.a. dawn redwoods), gingko trees, swamp cypress trees, and sycamores across what is now North America, Europe, and Asia. The Paleocene and the Eocene epochs also saw an increase and diversification of mammals, including hooved mammals, such as early horses, rhinos, deer, and sheep, rodents, and early primates.

After the PETM, the planet started to shift away from a humid environment to a monsoonal climate, meaning there were more distinct wet and dry periods. The forests became less dense and the landscape opened up, giving way to larger land mammals. Eventually, after the PETM and into the Eocene epoch, the globe started a cooling trend.

There are still plenty of mysteries surrounding what life would have been like for the plants and animals on earth during and after the warming event, said Currano. For her, as a paleobotanist, there are clues in the fossilized plant record from that time.

“Plants tend to be pretty good indicators of the climate in which they're growing,” she said.

For example, in a wetter environment, leaves are bigger. Additionally, data from modern times shows that there might be a loose relationship between climate and the type of edges a leaf has – smooth, like a magnolia leaf, versus serrated, like a beech or elm leaf. Serrated leaves are thinner, less likely to be evergreen, and might live in an area with a shorter growing season, indicating a cooler climate. Paleobotanists can also look at how plants migrate around the globe as they disperse their seeds in search of a place in which they can grow and thrive. 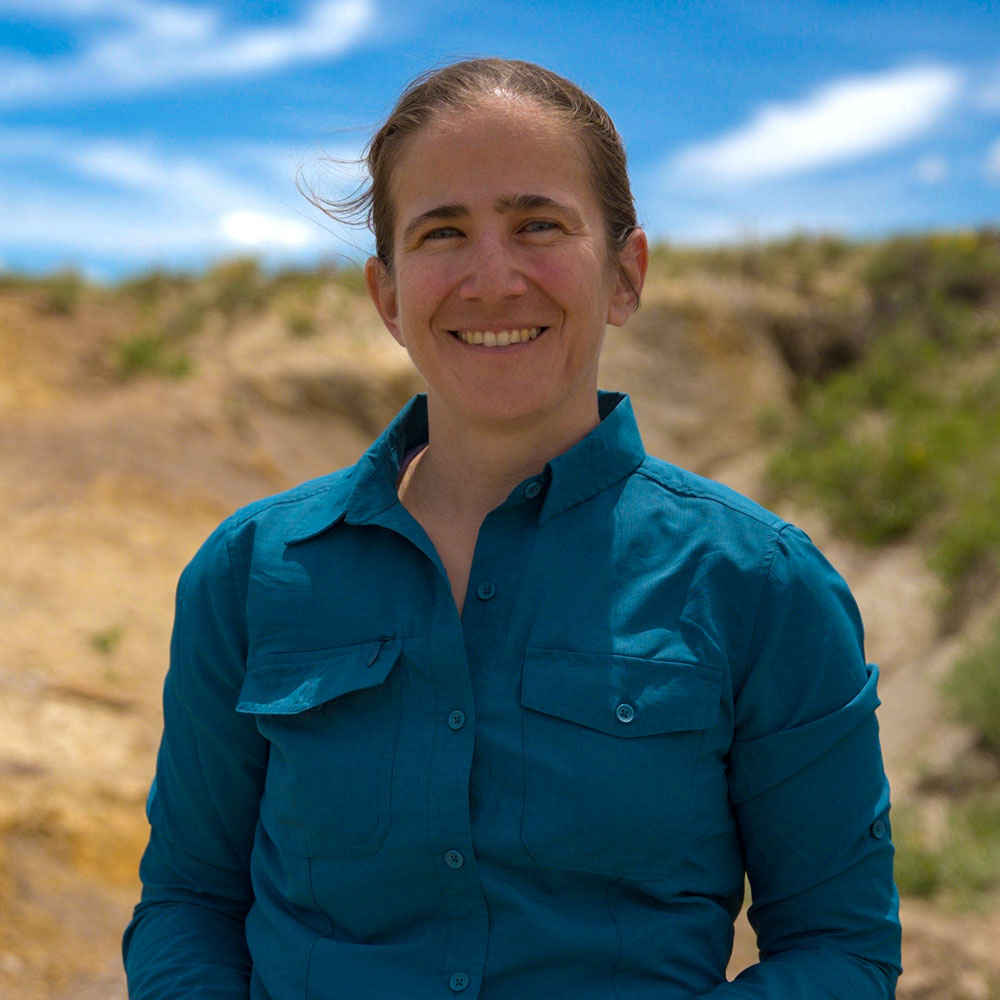 Ellen Currano conducts most of her field work in Wyoming, recently in the Hanna Basin. Photo: Julie Florio

And there’s something to be learned from tiny bug bites on leaves, too. Yes, paleontologists can actually look at the holes in fossilized plant leaves left behind by prehistoric bugs to understand what the climate was like and how it changed. There are a lot of gaps in the insect record since tiny bugs don’t preserve well, except in amber deposits, and there aren’t a lot of those. So paleobotanists look at how bugs ate the leaves to understand what insects were up to back then.

Currano said one of the things that is commonly seen in the fossil leaf record is an increase in the amount of a leaf being eaten during the PETM. There are a couple of possible explanations for that. First, insects are cold-blooded creatures. So as temperatures increase, their metabolism would have gone up, making them hungrier. They also may have been going through their life cycle more quickly, so there were more generations of bugs snacking on the leaves.

The second explanation could lie in increased carbon dioxide levels in the atmosphere.

“We know from a bunch of modern experiments – and also from what we're doing right now by burning lots of fossil fuels – that when you grow plants at high carbon dioxide [levels], they get less nutritious,” Currano said. “They have more starch and less protein in them. So the alternative is, in this higher carbon dioxide world, insects had to eat more plant material to get their nutritional needs met.”

Currano said there are lessons we can learn from the PETM as we look toward the future. Scientists are using some of these clues to try to understand what lies in store for the planet as it feels the effects of climate change. The earth’s temperature has increased by approximately 1 degree Celsius during the twentieth century as industrialization expanded across the globe, according to NASA.

Currano said the amount of carbon that was released into the atmosphere during the PETM is comparable to today. But the big difference is the rate at which it’s happening.

One study co-authored by Currano examined how plants responded to greenhouse gases during the PETM. While not many plants became extinct, Currano and her co-author were careful to point out that the rate of warming during the PETM was much slower than it is today.

“If we're saying that during the PETM, that this carbon release happened over 10,000 years, then that is 100 times slower than what humans have been doing,” she said. “We're doing this over hundreds of years versus 10,000 years.”